The end of The Vile Villages leaves the Baudelaires on the outskirts of V.F.D. scrambling to obtain the scattered papers from the Quagmires’ tattered notebooks to find answers to their questions. But the wind blows many of them away so they only have 22 pages to look at. And the kids can’t stay long since the angry mob will be back for them. So they flee. While the previous books always had Mr. Poe to fetch them, from now on, the Baudelaires are on their own since they’re wanted criminals. Sure they’re innocent but there’s a Daily Punctilio issue with their faces on it branding them as murderers. Yes, it’s basically Fox News in the world of ASOUE, but adults blindly believe its misleading content. So the Baudelaires are screwed. Though Sunny does make her first steps (but only in the book. In the show, she drives a firetruck.) 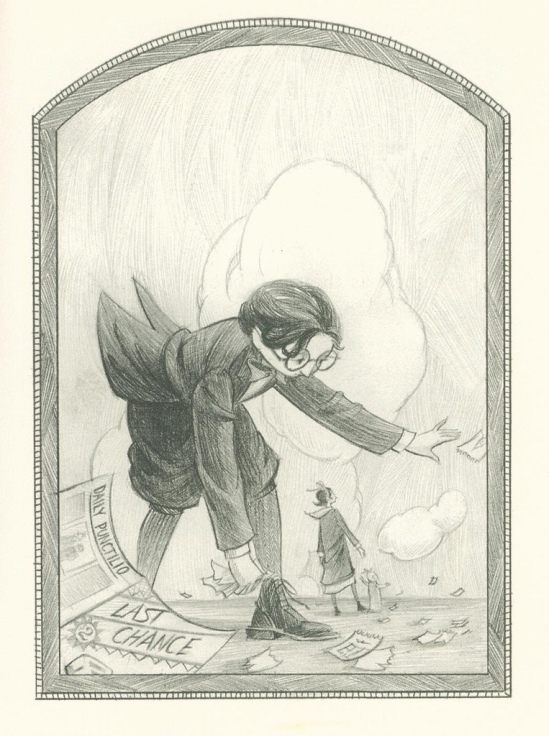 The song I selected is Frozen’s “Let It Go.” In the original version, Queen Elsa has just caused eternal winter as her ice powers are discovered in public. Now she’s fleeing from all her responsibilities as the reigning monarch of Arendelle. It’s not an empowering anthem like it’s touted to be in any way. “Let It Go” is Elsa’s way to say “fuck it all” as she hides in the mountains to build her massive ice castle. And she turns everything into ice and snow along the way. Though she’s embracing her identity, she’s doing it by turning back on the world and with no consideration for anyone else like her kingdom or her sister. In this version, I have Klaus singing how he and his sisters are on their own and how they must accept the idea that any adult will come through to them since they’re now fugitives.

Pitchfork mob rages from the village tonight
Not a safe place to be seen
No Hector and no Quagmires
Since they’ve left in a flying machine
The wind is howling like this swirling storm inside
Got to run like hell, they will have our lives

I remember every word in every book I’ve ever read
My encyclopedic knowledge fills the confines of my head
And one thought crystallizes like a fiery blast
I’m never going back, Mr. Poe can kiss my ass