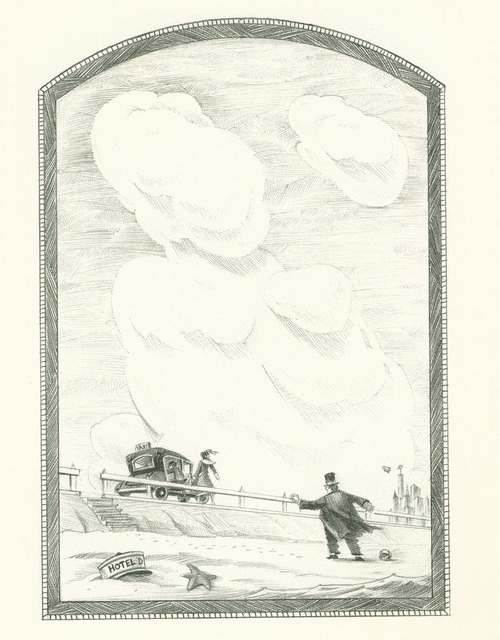 On a foggy Tuesday morning, the Baudelaires wash up on the shores of Briny Beach, the place where all their troubles began when Mr. Poe announced that their parents had died in a horrible fire at their mansion. Speaking of him, guess who the kids run into? You guessed it, the banker himself who’s a personification why child placement services should be handled by social workers. So Mr. Poe emerges from the fog saying that J.S. told him to come but he doesn’t know who that its. Nor does he know why. Anyway, he’s determined to take the Baudelaires away with him, telling them: “You’ve been missing for a very long time, children! It was very inconsiderate of you to run away without telling me where you were, particularly when you’ve been accused of murder, arson, kidnapping, and some assorted misdemeanors!” But the children have no intention of going with him for obvious reasons like the fact he’s an idiot who has no idea what a background check means in screening potential guardians. Seriously, I really don’t need to explain. They have to get in a taxi and that’s what they’re going to do. The driver is a mysterious woman with poetry books by Lewis Carroll and T.S. Eliot. And she introduces herself as Kit Snicket.

I decided end The Grim Grotto with “Good Riddance (The Time of Your Life)” by Green Day since it’s a goodbye song and titled such for Billy Joe Armstrong when his girlfriend moved to Ecuador at the time and he was kind of pissed about that. Due to its mellow sound, it’s become a huge hit at prom dances as a song reflecting high school nostalgia. In this version, I basically have the Baudelaires meeting Mr. Poe and telling him to stick it since he is one of the most worthless human beings on the planet.

“Good Riddance (F**ked Up Our Lives)”

Violet:
We’re back at Briny Beach, oh shit, it’s Mr. Poe
Afraid we got a date, so the answer’s clearly no
Sorry, Mr. Poe, but you’re a pretty useless guy
It’s not a question, but a lesson learned in time

Klaus:
It’s Herman Melville, Sir, case you don’t already know
A taxi’s waiting out for us, so now we have to go
We’ve learned for sometime not to count on you
Trust you for one last thing we’re all through

Both:
It’s something unpredictable, but in the end it bites,
I hope you know how you fucked up our lives.