However, unfortunately for Klaus, Dr. Orwell is a uniquely sinister character. In fact, she’s a greedy psychopath who’s willing to manipulate others through hypnosis and exploit their lack of free will. And she’ll hypnotize people to get what she wants, including Klaus. Though it’s unclear how often she employs her hypnosis on eye patients. For in the books, she only hypnotizes Klaus. In the TV series, she hypnotizes the whole lumbermill workforce in conspiring with Sir because there’s just no way anyone would agree to work for coupons. In The Miserable Mill, she conspires with Count Olaf for a share of the Baudelaire fortune before the kids arrived. Oh, and Count Olaf is posing as her receptionist Shirley but I’d rather not taste her cookies. Still, Dr. Orwell is quite one of the scariest and vilest villains in the series. After all, she knows that one catches more flies with honey than with vinegar. But Dr. Orwell is the honey, the Baudelaires are the flies, and Count Olaf is the vinegar. 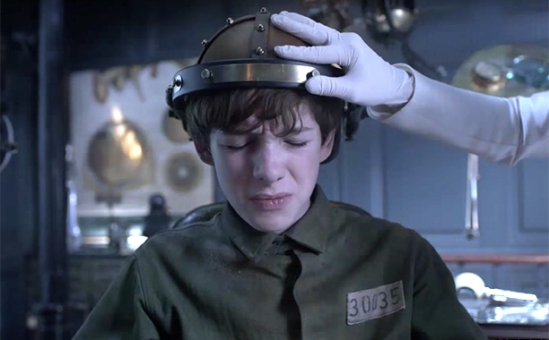 I decided to go with “Music of the Night” from The Phantom of the Opera which I used before to parody Peeta’s hijacking from my Hunger Games musical. Though hypnotism isn’t as bad as what Peeta received, it’s quite scary. The original version is supposed to have the Phantom putting Christine into a trance once he’s lured her to his lair. He sings of his unspoken love for her and urges her to forget the world and the life she had before. Nonetheless, the lyrics are just as creepy because the Phantom is a selfish control freak who wants Christine all to himself. Explaining why this is a great song when a character put under mind control. In this version, I have Dr. Orwell hypnotizing Klaus.

“Torture of the Night” (ASOUE Version)

Nighttime sharpens, heightens each sensation
Darkness wakes and stirs imagination
Silently the senses abandon their defenses
Helpless to resist what’s in your sight
For I subject you to the torture of the night

Slowly, gently, pain unfurls its splendor
Grasp it, sense it, tremulous and tender
Hearing is believing, hypnosis is deceiving
Hard as lightning, soft as candlelight.
As you’re thrust into the torture of the night.

Close your eyes –
For your eyes will only tell the truth
And the truth will just only make you flee
In the dark it is easy to deceive
That your free will would surely cease.

Softly, deftly trances shall caress you
Hear it, feel it secretly possess you
Open up your mind, let your fantasies unwind
In this darkness that you know you cannot fight
The darkness of the torture of the night

Close your eyes –
Start a journey through a strange new world
Leave all thoughts of the world you knew before
Close your eyes –
And let my methods set you free.
So your mind will belong to me.

Floating, falling, sweet intoxication
Touch me, trust me, savor each sensation
Let the dream begin, let your darker side give in
To the power of hypnosis I ignite
The power of the torture of the night!

You alone can make my aims take flight
As I control you with the torture of the night.