Now that I have my Christmas posts out of the way, I get into the snow and ice posts. Mostly since they don’t have to apply to Christmas specifically but winter in general. Though the pictures for these posts are usually in my Christmas folder in my pic files. Anyway, despite that today is the first day of winter, there’s not a lot of snow outside my window. Rain, yes. But not snow. Though if it gets cold enough the water on the ground will turn to ice and make driving quite dangerous. Anyway, if the snow has been around for awhile, kids and many adults might want to build snowmen. The standard version usually has 3 snowballs of various sides put together with stick arms, coal buttons and eyes, and a button or carrot nose. While the figure may wear a scarf and hat. So for your reading pleasure, I give you another assortment of unique snowmen to lighten your cold winter day.

Here he is watching from his deck. I’m sure the TV is a piece of junk since we know what precipitation can have on electronics.

2. Quick, there’s a snowman with a gun! Run for your life!

And the snowman has had a few rounds fired into him. While he’s holding a beer. Guess he’s been drunk.

3. “I now pronounce you snowman and wife.”

I mean they’re a snowman wedding couple. Bride even has a veil and towel on her head.

4. This snowman hails straight from Appalachia.

Appalachia is supposed to be a college by the way. Though you have to love that hat.

5. Guess we have a hit and run on Oak Street.

This is supposed to be a snowman run over by a car. And yes, he’s decapitated in front of a parent and child.

6. What the hell is he eating? 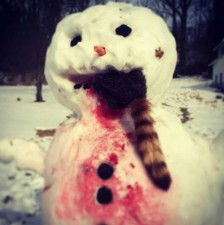 7. You’d swear their eyes glow in the snow.

Not sure what they use in those yes. But the effect is quite eerie.

Because camels are desert animals. Yet, the camel dons a scarf around its neck.

Some even wear pails as hats. Others use branches from evergreen trees for hair.

Though I wouldn’t be in the middle of the street if I were him. Though he always comes prepared.

Since they use fruit for the facial features. Still, the tie is quite tacky.

12. The roads can use a good sweeping.

Here’s a mother and daughter with leaves in their hair. The mom carries a broom.

13. This babushka wishes you stay awhile.

She’s wearing a fancy skirt and carries a broom in hand. But please don’t mess with her.

14. Perhaps you’d like to wish this Indian snow bride well on her wedding day.

Since Indian women usually wear red when they get married. Though she doesn’t even have henna on her hands. 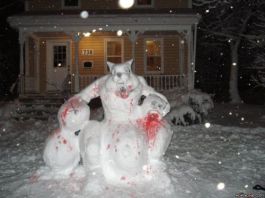 He’s killed a couple of snowmen already Get inside before he gets you.

16. These snowmen have come out to protest.

They’re calling for the troops in Iraq to come home. So it’s from about a decade ago.

17. Didn’t know you could build a snowman on the beach.

Actually he’s more of a sandman than a snowman. Because there’s no snow where he’s at. 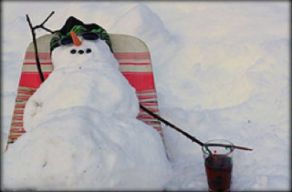 He’s got his drink and lying on his lawn chair. So don’t mind him.

19. Is that a pole sticking from his chest?

It’s kind of gruesome snowman picture. Like he had something stabbed through his chest.

20. There are a couple of Arabs in the truck bed.

The snowman is a sheik. While you can barely see his wife’s face due to her veil.

She has grass on her head near her beret. Though her shopping bag is quite small.

22. You’d think this snowy fox is off the wagon.

Since the fox is carrying a bottle of booze. So it’s best you stay away from him.

This seems to more likely resemble a clump of snow with eyes and nose. But it’s quite adorable.

24. Want to see a couple of handstands.

You can see the snow kids standing upside down with their boots in the air. While the snow dad looks on.

25. There’s been a murder. Death by snow shovel. 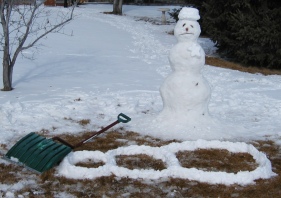 There’s even a chalk outline of a snowman on the ground. While the snow cop has a snow star badge.

26. Want to sit near this huge teddy bear?

Yes, this is a giant snow bear. Though I think it should have a thicker scarf.

Well, the kid was sledding. Still, it’s quite a gruesome scene for winter. 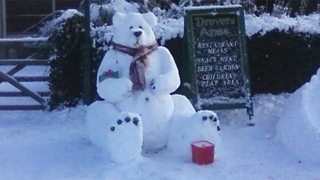 It has a present in its arms and a bucket to put money in. Still, it’s quite cute.

29. Seems like this guy has his nose in something. 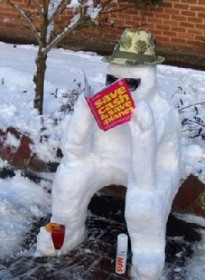 He seems like he’s lounging around with a drink. Still, his fedora is incredibly tacky.

30. This snow woman is looking forward to spring.

Yet, she should want winter to last as long as possible. Mostly because when spring comes, she’s gone.

31. You need not disturb a snow lady in the shower. 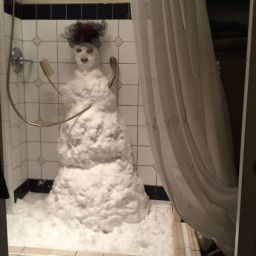 Her arms consist of a shower head and bathing brush. Also, is the snow below supposed to be bubbles? 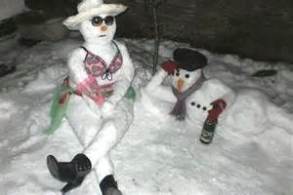 Since the snow woman is wearing a bikini. While the snowman lies around to gaze at her figure.

33. Could you spare some change for a poor snowman?

He even has a cup out for the money. Every little bit helps.

34. Anyone would want to pet this snow cat. 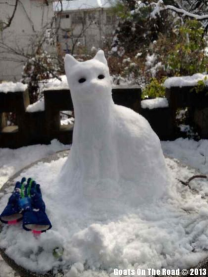 This one Seems quite simple. But the cat has dark, soulless eyes.

I’m sure that’s actually a dummy. But certainly looks scary from this angle.

This is from Japan after a snowfall, by the way. Nonetheless, it’s quite adorable.

She’s supposed to be a mermaid. Like the Copenhagen mermaid statue in Denmark.

38. This snowman always enjoys a day in the park. 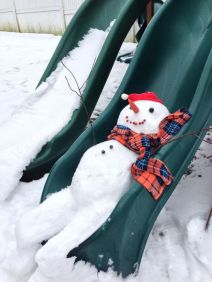 Here the snowman goes down on the slide. Wheee!

Yes, that snowman isn’t quite happy. Neither is that kid beside him.

Indeed, he’s the Snowboy who lived. While his wand is just a regular stick.

41. This fellow prefers to ride on the roof.

Since this snowman was made on the roof of this car. Not sure if it’ll survive the trip though.

He’s that cute little droid from the new Star Wars series. And since he’s round, he makes a rather cute snowman.

This one even has coconut shells, leis, and a hula skirt. Too bad Hawaii doesn’t have good weather for snow.

44. Seems like this snow caterpillar is worming its way through. 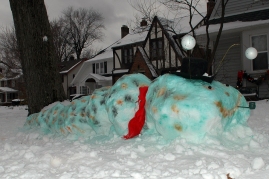 Took a lot of snowballs to make this one. While it’s spray painted green with glowing antennas.

45. Someone is in a melting mood today.

This one even has an umbrella in the snow. But it will soon melt someday.

46. This rustic couple always stays together.

They’re wearing straw hats and old clothes. But while he has a stick she has an umbrella.

47. This snowman has his own digs.

Well, he has a rather simple home. Though the price looks quite steep.

48. Perhaps it’s best to sit down for awhile.

This snowman sits on the bench. Too bad he can’t smell the flowers. Since it’s winter.

49. This little dog loves to play in the snow. 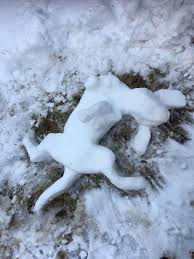 Okay, the little dog is made out of snow. But it should delight anyone on a cold wintry day.

Skilled with fighting stick, he is. But do or do not. There is no try.

Here he’s lounging on his lawn chair. Like the bucket and shovel.

It’s from that “Gangnam Style” video. And yes, the guy’s dressed up like the snowman next to him.

53. This snow person is totally lovestruck.

Guess this is for Valentine’s Day. Now that’s a long way away.

54. This snowman would like to make a collect call.

Still, nobody uses phone booths anymore. Since we all use smart phones that we keep in our pockets or bags.

Though these snowmen use their heads as the ball. Kind of freaky if you ask me.

56. Snowmen have to wait in line just like the rest of us.

Here he is sitting on the bench reading the paper. Just like a normal guy on his way to the office. 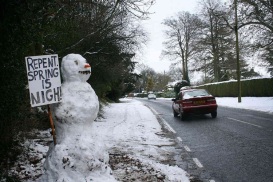 This one makes fun of religious fanatics obsessed with the coming apocalypse. But for snowfolk, spring is very much the end.

58. You’d be blessed to have this snow couple around.

I think the snowman is supposed to be an Orthodox priest. And yes, they can get married, by the way. 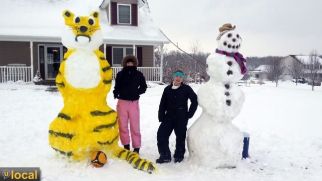 It’s even taller than the snowman. While it’s covered in spray paint.

60. Some guys will gawk at this snow woman. 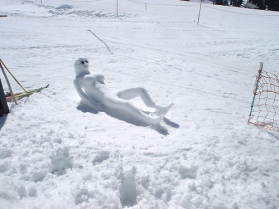 Since she’s supposed to be a bombshell bathing beauty. Guaranteed to stop traffic.