Now it’s on to the Halloween vintage cards. In these days, there seems to be a greeting card for almost everything. In the olden days, this was no exception except in regards to MLK Day because the great civil rights leader wasn’t born yet or any kind of holidays white people didn’t celebrate. Anyway, given that Halloween greeting cards are apparently still a thing, you shouldn’t be surprised to see plenty vintage ones. However, in many ways, the vintage cards usually tend to be crazier for various reasons. Some may be dated. Some may be inappropriate. Some may be racist. And some may contain imagery that doesn’t seem to fly today. So for your reading pleasure, I bring you another assortment of crazy vintage Halloween greeting cards.

“Why the hell would leave a perfectly good office binder on my doorstep? Don’t they know they’re very expensive?”

And that’s not a safe way to hold a jack-o’-lantern, kids. Honestly, that’s a fire hazard.

3. Want to catch a jack-o’-lantern? Spread crumbs through a wagon, I think. 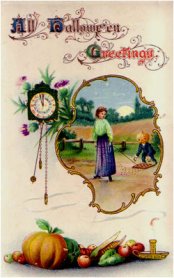 That way, he’ll be happy to tag behind you wherever you go. Still, how did anyone think this was a good idea?

4. This demon comes out to greet you from the jack-o’-lantern.

Seems kind of friendly for a creature of Hell. Guess it’s hot inside that jack-o’-lantern.

5. While mere mortals use jack-o’-lanterns as Halloween decoration, witches use them for broom headlights.

If it can talk, it doubles as a GPS system. Who knows how the characters in Harry Potter can do without them.

To be honest, the corn guy’s more likely freaking me out. Seriously, it just gives me nightmares.

8. Feel free to sit down in your jack-o’-lantern bib. 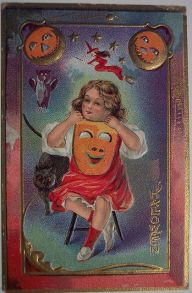 Actually that bib’s kind of creepy if you ask me along with the jack-o’-lanterns on the top corners. Also, the girl seems like she’s slightly suffocating.

Seems like everyone in this is freaked out by this. Save for the black cat for some reason.

Still, despite the inscription, how do pumpkins hug and kiss? Linus, can you answer me on this one?

11. Perhaps you might want to go as a skeletal bat for Halloween.

Seriously, she’s dressed up as a bat that bit into a powerline. Kind of disturbing if you think about it.

Yet, that owl’s watching the creepy pumpkin man follow the seeds from the woman’s contraption. Wonder if this was a thing back then. 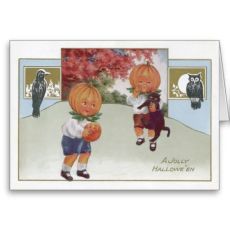 Oh, those creepy orange kids with one holding a poor cat. Makes me wonder if this is a childhood photo of Donald Trump. Wouldn’t surprise me.

Are those monsters supposed to be goblins? Also, why is one riding a cat? 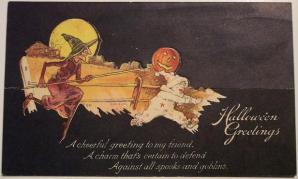 Here she chases a kid with a jack-o’-lantern on a stick. And I thought witches ate kids. Then again, that may not be the case.

16. Forget brooms. The modern witch travels on a biplane of giant playing cards. 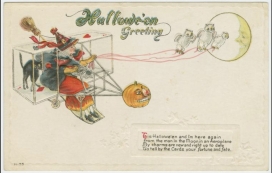 She even has a jack-o’-lantern on the front for navigation. And yes, it runs on owl power. But the cat’s kind of afraid of heights.

17. This Halloween, stay out of the cabbage patch. 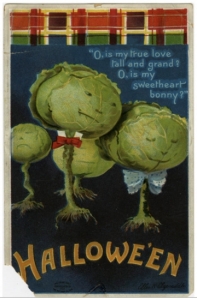 No, these aren’t the Cabbage Patch kids you remember. Actually this cabbage people make out scene is getting a bit out of hand.

18. “For ways that are dark and tricks that are vain. Watch out!”

Here a black cat sits with 4 scary jack-o’-lanterns. But at least they’re not lit, yet.

19. Everyone loves a Halloween costume party.

Though whether to dance with a medieval version of the Joker is another matter. Seriously, his costume’s kind of freaky if you ask me.

20. The black cat in a pumpkin has a letter for you.

Though the kid doesn’t seem to think twice about trusting the cat. Kind of looks hypnotized. Also, note the sticks under the pumpkin.

21. Riding a broom on an ear of corn gives a witch more seat room. 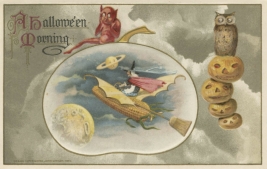 But make sure the ear is giant size and has bat wings. Also, I think she might drive using a sideways steering wheel.

22. On Halloween, fell free to hoist the jack-o’-lantern flag.

Instead of a skull and crossed bones, this flag has a jack-o’-lantern and crossed candles. Yet, the witchy woman has a rather suggestive expression.

23. The jack-o’-lantern always watches outside.

So maybe playing naked outside at night is not a good idea. Not that it would be anyway.

Unlike most depictions, he’s wearing a suit. Still, he’s guaranteed to inspire nightmares.

Though I’m not necessarily sure that she’s sitting appropriately. This is especially since she has her skirt up.

26. It takes two to carry a large jack-o’-lantern.

Nonetheless, the jack-o’-lantern seems to have a mind of its own. As you can tell by the eyes. 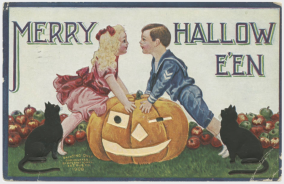 But since these kids have their hands on the jack-o’-lantern too long, the pumpkin’s starting to feel smushed. Seriously, they need their space once in awhile.

Yet, the pumpkin guys sitting on the gourd are very unsettling to me. One doesn’t seem too happy with the girl blowing her horn.

Since there’s a rather creepy kid inside. And I don’t think the kid in front really wants to know.

30. Halloween greetings from the witch with a pumpkin fetish.

Hey, it may not look the least bit normal. But at least she’s not making out with Donald Trump.

Actually I don’t know why this woman can be in the same room with all these scary masks. Since they all look incredibly terrifying.

32. Ghost jack-o’-lantern wishes you happy Halloween on a broomstick. 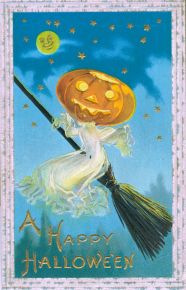 The outfit’s rather translucent. Though the jack-o’-lantern doesn’t seem sure how to fly this thing.

Excuse me, but what the hell is Cupid doing here? This isn’t even his holiday. He’s Valentine’s Day.

34. Don’t be surprised to see double this Halloween.

You can see how the images mirror each other. While the jack-o’-lantern thinks it’s just crazy.

To be fair these jack-o’-lanterns are rather creepy. But what are they doing behind that stack?

36. A witch and owl love hanging out together on the moon.

That owl looks abnormally huge. Because most don’t grow that big. Yet, the witch doesn’t care.

37. There’s nothing on Halloween like making out in a jack-o’-lantern.

First, that’s a major safety hazard since the clothes could catch on fire. Second, the cat and owl are basically like, “get a room, you two.”

38. The moon always knows a hot witch when it sees one.

Here the moon gazes on the witch with a pervy smile. While the witch might want to blow out her candle so the moon doesn’t see her as well.

39. Now where did that slice of cake go? 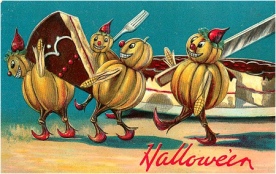 Yes, these creepy pupkin people have it for some reason. Maybe I’ll be okay without it. I’ll live.

See what I mean about a jack-o’-lantern functioning has headlights on a broomstick. Why don’t they have that in Harry Potter?

41. Remember that witches will kidnap your children.

I don’t have a good feeling about these kids. Since witches are known to eat children. The boy doesn’t seem to mind though.

42. All kinds of demons can come out of a jack-o’-lantern.

Here it sits upon a sinister black cat. Must be magical because I can’t see how the cat can retain its balance.

43. An owl sits upon a glowing jack-o’-lantern holding an apple.

Yet, the girl seems rather fascinated instead of freaking out. Because how can the owl get inside? And it can basically claw and peck you to death.

44. Here this woman sits on a jack-o’-lantern dressed as an owl. 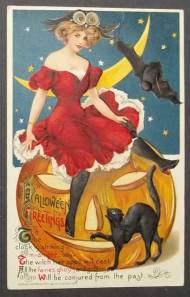 Yet, the giant jack-o’-lantern has a rather terrifying expression. Since even the cat’s freaking out.

45. You can always sit back on a jack-o’-lantern with a candle on Halloween.

The pumpkin’s glowing. While the cat is glaring at the viewer with malicious intent. Wouldn’t want to go near that thing.

46. Don’t look now but I think that jack-o’-lantern’s stoned out of its mind.

Not sure what’s in that pipe. But I also think the jack-o’-lantern’s looking up that woman’s skirt. That cat’s like, “Not cool, man.”

47. A campfire is always a graveyard smash.

And yet, one’s running away in fear, two are on top of each other, and the would’ve gotten a selfie to post on Instagram. Only trouble is that smartphones and Instagram aren’t around yet. 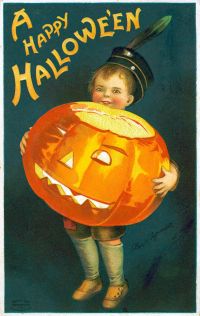 Once you’re asleep, this little boy will come into your room with a knife and kill you. If you don’t take some time to lock your doors first.

49. Here a little witch picks up a name from the jack-o’-lantern.

Whoever’s name she gets, she’ll go to their house and turn them into a newt. And I’m not sure if they’ll get better.

50. Happy Halloween from behind the haystack. 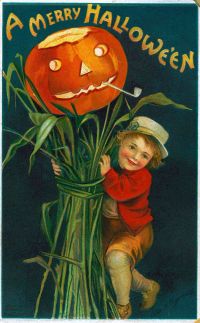 Now that looks like a fire hazard waiting to happen. Wouldn’t be surprise if the jack-o’-lantern leads to the stack catching on fire and the boy burning to a crisp.