For some mysterious reason, old vintage Halloween pictures seem to be a lot creepier for some reason. Maybe it’s the black and white photography. Maybe it’s how the costumes were made. Maybe it’s their conception of scary. I don’t know. Still, when you look at them, they’re bound to freak you out and give you nightmares for weeks to come. Anyway, for your reading pleasure, I give you another assortment of nightmarish vintage Halloween costumes. Sweet dreams.

2. Now, everyone, smile for the camera.

Man, I don’t think the guy dressed as a Native American would fly today. Also, some of the masks are quite terrifying.

3. I’m sure this witch is kind to her animals.

Yet, I’m not exactly sure by the grin on her face. Also, that cat looks like it’s stuffed.

4. The kitchen staff can be such animals. 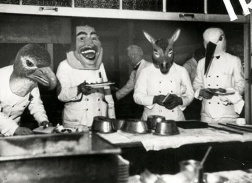 Okay, I don’t want to go in there. For all I know they could be cooking some of Hannibal Lecter’s best known recipes.

Yet, she could use a full-on makeover. Then again, witches don’t care much about their looks, anyway.

6. Even a ghostly skeleton seeks to pick up chicks. 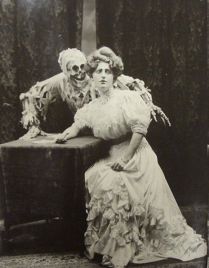 I’m sure this version of Ghost doesn’t contain the iconic pottery wheel scene. In fact, I don’t think they’ll be making love to “Unchained Melody” anytime soon either.

7. You’d think this lady was batty. 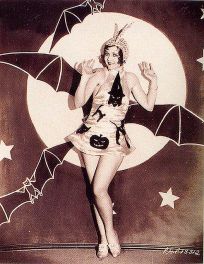 Yes, she’s in a sexy bat costume. But her dress doesn’t make much sense to me, save for fanservice.

8. Perhaps buying your costume isn’t as great as it seems.

Yeah, the masks look kind creep thanks to black and white photography. Still, the one with the leopard print doesn’t seem to have a face.

9. Want to dress as a sexy ghost? Just put a white bag on your head.

You could never pull this kind of costume in PA. Mainly because the weather’s under 50 degrees by this point.

10. May I present to you the 19th century version of the Village People.

As you can see, they’re not exactly a lively bunch. In fact, they seem more likely to kill you in your sleep. 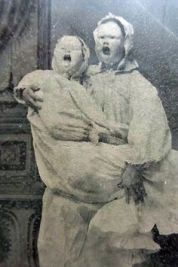 Okay, these two look too big to be babies. Yet, their masks can just scare the living shit out of you. 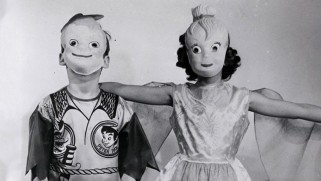 These are actually really terrifying. And it really says a lot since Peter Pan is an incredibly creepy movie.

13. Here you see Spiderman and Batman hang out with Colonel Sanders.

What a way to show a good example to kids, superheroes. Of course, masked vigilantism doesn’t help either.

That duck mask is frightening. Then again, the chicken mask may even be scarier.

15. Hope the trick-or-treaters can make themselves comfortable. 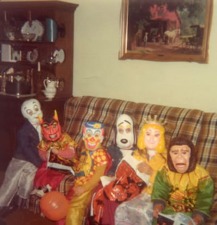 Okay, those vintage costumes are actually scarier in color. Even in regards to Princess Aurora, Casper, and Snoopy.

16. These kids are just resting on the grass.

These masks are incredibly terrifying. Don’t look now, but I think these kids are devising ways to kill neighbors who don’t give them candy. 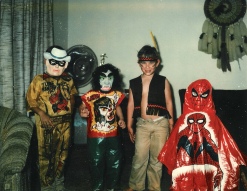 Apparently, someone managed to make Spiderman and the Lone Ranger scary. While the Wolf man seems kind of lame.

Since the giraffe is made out of paper. Still, wonder how the girl can see in it.

19. Beware of the chicken boy.

I don’t know why the kid just stick around transfixed on the chicken. When the girl should be running away screaming for her dear life.

20. These two are just walking the street on their Halloween haunt.

The witch seems like she’s wearing Groucho Marx glasses without the mustache. But it should be the ghost that really scares us.

21. You might want to get away from the monster behind you. 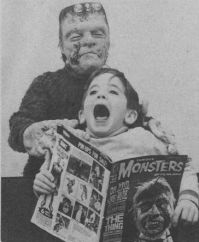 That’s Frankenstein’s monster attacking that boy. And I’m sure the boy might need another pair of pants.

Since they’re all wearing bird masks and cloaks. Still, if it was the 1300s, we’d wonder how many of them will be left next year.

23. You’d think this is an odd-looking bird. 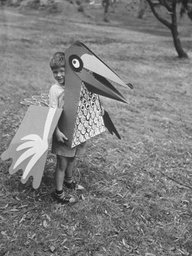 Well, it’s a cardboard costume. But it kind of looks eerie in black and white photography.

24. Beware of the little red devil. 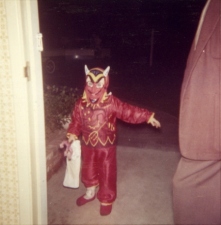 I’m sure this kid is all right. But the costume makes him seem like a little terror out of hell.

25. A mother sits with her strangely dressed children.

Two of them are supposed to be dwarfs, I think. One’s a cowboy. And one’s the Monopoly Man. But all seem rather dead inside.

26. This woman just wears a dress, mask, and cone hat.

Wearing that, you’d think she was on her way to a cult meeting. But she has a pumpkin on her dress.

27. These four just hang around the front door.

But look at their masks and you don’t want them in your house. Seriously, they make Freddy Krueger look like a character on Sesame Street.

28. You wouldn’t want to run into this little clown at night. 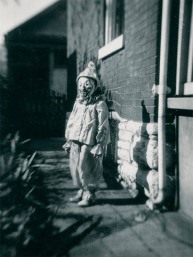 Wonder if this is a childhood photo of Pennywise the Clown. I mean he had to be a child somehow.

29. Here a ghost emerges from the bushes.

Let’s hope he didn’t make it from some Klan robe. Because they were a thing back in the Gilded Age and 1920s. 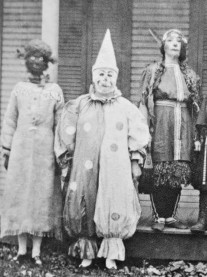 Consists of a scary clown and two very offensive stereotypes. For God’s sake it was the early 1900s. Times were really racist.

32. Don’t hitch a ride with these masked men.

Since they’ll take you to an undisclosed location. Then they’ll kill you and rip you to pieces.

33. Who knows what this clown will do to these two women.

Yeah, I get that he’s wearing a tall hat. But I think after this picture was taken, the two women were never seen again.

34. The skull person is within the living room. 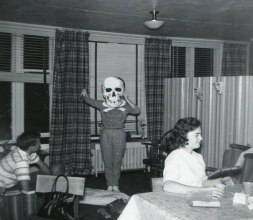 Indeed, they’re not scaring anyone. But in time, they will chase teenagers with a knife once it gets dark.

35. Each trick-or-treater shall receive a large pumpkin bag.

The devil and Raggedy Ann masks will haunt your dreams. The cat, not so much.

36. Sometimes a white mask is all you need.

She’s even on roller skates. That means she can go after you with a knife faster. Except on the stairs.

37. Are those kids or ventriloquist dummies?

Well, they could be kids wearing masks. Yet, they don’t really seem very lifelike to me. Something’s off here.

One of the revelers reminds me of an undead muppet. Another has a rather creepy clown face.

These women wear dresses with markings on them. But they must dance around two virgins before they sacrifice them to their blood hungry god.

She seems rather lonely. Mostly because everyone’s frightened of her. And her cat’s plush, I think. 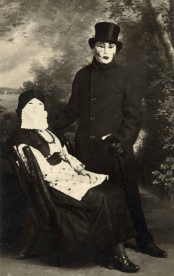 Kind of reminds me of the guy kicked off The Muppet Show. Since he often gave kids candy from his windowless van. Or so I heard.

43. Care to see the clown in the corner?

On second thought, I’ll pass on that one. Don’t want to be found near the river with an ax in my back.

44. Don’t you ever refuse to give these kids candy.

Because if you do, they will kill you. Even if you honestly ran out, they will still slay you. So please have candy ready for them.

45. Sandra finds romance on Planet of the Apes. 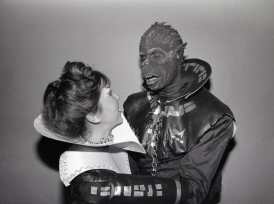 “Come to me, you damn dirty ape. Send me to your monkey bar sex dungeon.” 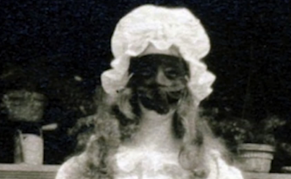 Okay, this clown is terrifying. Avoid him like the plague if you value your life. 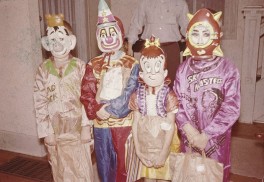 These costumes are quite frightening. Yet, the astronaut has to wear a rocket shaped mask for some reason. 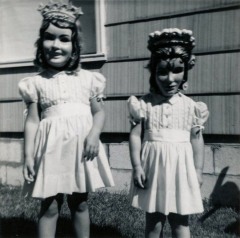 Those princess masks are guaranteed to give you nightmares. Will certainly haunt your dreams. 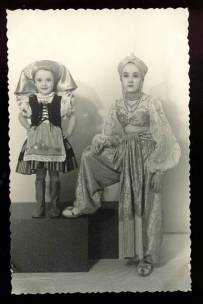 One doesn’t pretend not to care. The other’s thinking about skinning the neighbor’s cat.

51. Make sure your stick matches your masks.

Though each one is just as scary. And the kids in the back certainly know it.

The woman is freaking out. The guy is splayed on the floor. Wonder if this is some horror cosplay scene.

53. Just because you’re a woman doesn’t mean you can’t be Batman.

Well, she’s an early incarnation of Batwoman. But what am I kidding? Batman wasn’t around yet.

Actually, one’s supposed to be Zorro. But they will strike if not given candy for trick-or-treating. 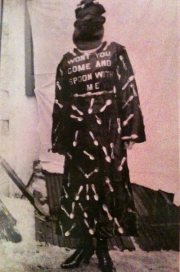 Oh, hell no. For God’s sake I’m not that desperate for cuddles.

I don’t know about you. But that’s a dude who looks like a lady to me. Possible ancestor of Steve Tyler from Aerosmith. 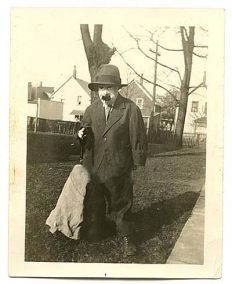 For if you don’t, he’ll run you down and cut you up in his basement. Don’t say I didn’t warn you.

58. Watch out for the locker room ghosts.

Of course, they probably didn’t have the time and resources for a full sheet. So they used pillow cases instead. One even has a black bag. 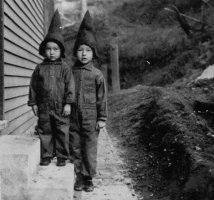 Okay, that’s kind of insensitive. Joseph Merrick deserves more dignity than that. Then again, he probably doesn’t know anything about Merrick.

On second thought, do clowns really need to be inflated. That just makes them scarier.

This mouse seems rather hospitable to that girl. Don’t really want to what kind of relationship they have.

These masks are so terrifying even if they’re supposed to be dolls and clowns. And I’m sure they just set a house on fire.

64. Clown or space alien? You decide.

Actually, she’s probably dressed like a clown. But her tall hat totally seems like it’s from another planet.

65. These two always stick together.

Mostly because they’re dressed as co-join twins. They do a lot together, including murder.

They’re all decked in their pajamas like they’re having a slumber party. Though I’ll pass on this one.

67. This black cat lingers in the alley. 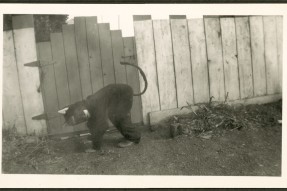 Sure they may look scary. But the 2019 trailer to Cats just makes it look tame in comparison. 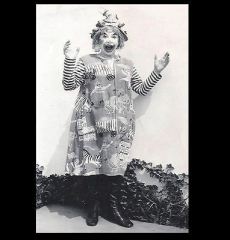 For God’s sake, kill this infernal creature with fire. Before he kills somebody or gets in a daycare center.

69. Don’t want to run into these monsters even on a good day.

They’re just kids in Halloween costumes. But the masks are simply spooky.

70. Don’t mess with these clown ladies. 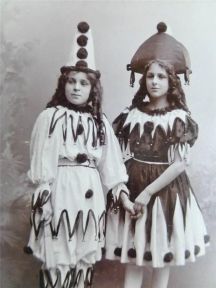 Mock their circus act and I swear they will rain fire and terror on you. Or they’ll just kill you in your sleep.

Hey, at least she’s not Rhoda from the Bad Seed. She wouldn’t kill anyone for trivial stuff like a penmanship award. But she will if you mess with her.

Guy looks like a sagging and depressed muppet. And with bad fashion sense.

73. This witch is awfully fond of these little girls.

Wonder if that witch is in costume. But she shows eyes of ill intent.

74. Care for some clandestine greenhouse ritual? 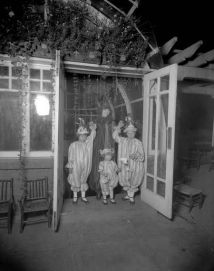 The kids seem like they’re dressed in their pajamas. The mom’s dressed as a witch.

75. Here’s a still from the new Joker movie.

Well, that might be a little too early. But I’m sure he’ll grow up to be an unstable psychopath nonetheless.

76. Pretty short to have mustaches, don’t you think?

One’s wearing a dress to indicate she’s clearly a girl. But these two seem like they’re silently judging you in those creepy masks. 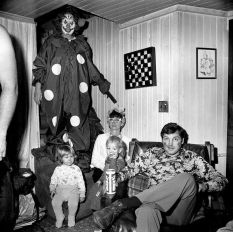 Seeing that clown hovering over that family sends shivers down my spine. Also, is he holding a gun? 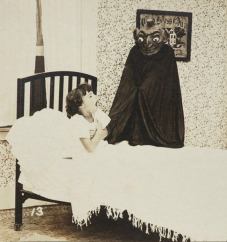 I can understand why that girl’s screaming. Still, kind of way too young for this Faustian bargain thing. I think there should be an age of consent for that.

They’re even all holding masks. But come midnight, they will wreak havoc on a murder spree.

80. These robots come from another galaxy. 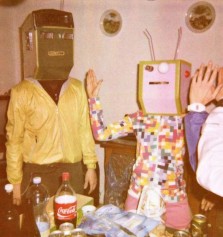 But mess with them, they’re bound to exterminate you. They also have great fashion sense.