Since my 29th birthday is on January 13, it’s only natural that I do another edition of messed up birthday cakes from Cake Wrecks. When we make a cake in our homes for our loved ones, we usually expect that mistakes will be made since we’re not anticipated a masterpiece. But when we purchase a cake from a store or bakery, we expect that it will look as perfect as the picture in the book. Yet, since we have a website like Cake Wrecks, we should know full well that this isn’t the case. Sometimes the decorators may not know how to take directions. Sometimes they’re not great artists that the cake looks creepy or disgusting. So for your reading pleasure, I give you another assortment of screwed up birthday cakes. Enjoy. By the way, some of these may not be safe for work.

This one has piping in red while it says “too No in Blue.” But at least it has 2 candles.

2. When you need a cake to cover 3 occasions for your dad.

Guess this was made for a dad who just got out of prison. Though it also works as a 50 Shades of Grey theme.

That’s not a great message to put on cake. This is especially the case with the smiley face containing x’s.

4. Perhaps you might want to rethink the hotdog cake. 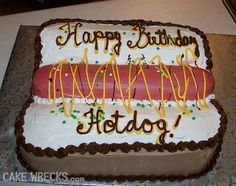 5. Who doesn’t want a SpongeBob cake?

That SpongeBob looks really disgusting, especially around the nose. Also, why does the cake have 6 candles.

Since Alexis wanted the letters in pink. While the decorator didn’t know how to follow directions.

7. I don’t think Bobby will get his Lone Ranger cake.

The cake doesn’t even resemble a western scene. Also, “lone” is spelled “loan.”

8. Happy Birthday to Jenifer with “One N Only.”

Well, at least they spell her name right. Though the “F” is capitalized.

9. Of course, every child likes a clown cake.

Suddenly, Pennywise doesn’t seem too bad despite being an actual killer clown. Seriously, why do they cater clowns to children?

Well, if you want an IT themed party, you can’t go wrong with this. Since this cake can terrify the shit out of you.

11. Any little boy would enjoy an epic Avengers cake.

13. They only needed to put “Happy Birthday” on the cake.

But someone just had to repeat the instructions. You have to wonder who decorates these things sometimes.

14. A Winnie the Pooh cake is always a wholesome choice. 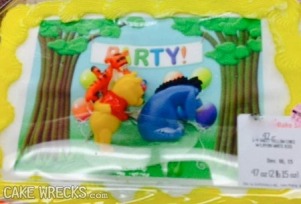 What the hell are Pooh, Tigger, and Eeyore are doing? Seriously, this can’t be good.

15. I don’t think Bobby will be pleased.

Since it’s spelled out as “Booby.” Hope that doesn’t result in someone getting stuck with a bad nickname for life.

16. Someone wants sprinkles all over the monitor?

But the disembodied braceleted hands doesn’t seem to help matters. Since that’s kind of creepy.

18. Didn’t like the Minnie you put on the cake? Turn it into a bowtie.

At least someone realized they made a mistake. Still, doesn’t seem to help matters as you can see.

Someone doesn’t seem so sure who this cake is for. Since there’s a question mark at the end.

Must be short for “Pickles” I guess. Still, doesn’t seem to go with the blue flowers.

21. You can just put the plaque right around the edges.

Except it says, “Happy Birthday Plaque” like they expected it to be for anyone. And in pink icing, too.

Apparently, some decorators pretty much put on what they hear on the phone. Wonder what was going on here.

23. For God’s sake, that’s not how you draw Mickey Mouse!

Seriously, a blackface Mickey Mouse? Did the decorator have any idea of how extremely racist that is? Then again, Walt Disney didn’t see anything wrong with doing Song of the South.

24. Since when did Mickey have fangs?

Excuse me, but that no way resembles Mickey Mouse. More like the Big Bad Wolf getting ditched by his prom date.

25. Apparently, you can’t use spell check on cake decorating.

Yeah, the punctuation is horrible on this one. Also I’m not sure what that saying means. Hope Sue isn’t a grammar Nazi.

26. I don’t think that’s a great way to describe how someone’s aging.

Also, that wine glass reminds me more of a misshapen toilet plunger. Seriously, how hard is it is to do wine glasses?

Hope Sue isn’t too self-conscious. Because this is definitely something nobody wants on a cake, let alone a woman.

28. Hope you can blow the candles off this one, Oliver.

Okay, “blow that” shouldn’t be on a cake. Because that could have a lot of a lot of negative and sexual connotations. Oh, it’s supposed to be “below.”

29. Perhaps you should go with a birthday message that doesn’t get censored.

Also, that says “Jappy” instead of “Happy.” Not the kind of message you’d want to open with.

30. You should always remember your followers on their special day. 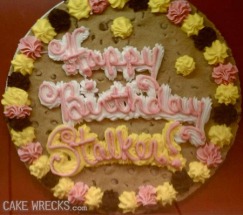 It says, “Happy Birthday Stalker!” Makes me wonder what the relationship is between them.

31. Those who love the Smurfs would enjoy this cake.

What the hell is wrong with his nose? Seriously, that’s messed up.

32. Hope you can appreciate a cake of your neighborhood Spiderman.

Okay, that didn’t turn out well. Also, is that supposed to be a hand?

33. Any boy would love an Iron Man cake on his birthday.

From Cake Wrecks: “Huh, I’ve never heard of Iron Man’s “exploding crotch” feature before. Must be an upgrade.”

34. You’d get excited over this monster truck cake.

Yet, this truck seems to go on the shitty path. Seriously, the trail resembles a huge turd.

35. Don’t have Ninja Turtles? Perhaps a pencil box will do. 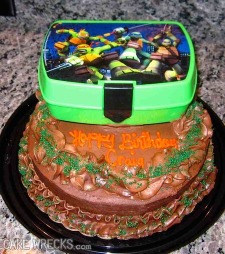 Well, at least Craig’s getting a new pencil box for his birthday. Though I don’t think he’d want one.

36. I guess Delia is into rock music.

From Cake Wrecks: “Clearly the baker just wanted to protect the identities of those poor musicians.” Seems reasonable.

37. Are you a boy who likes video games? This Mario cake is for you. 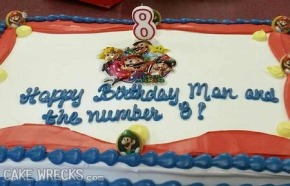 Yet, I think the inscription shouldn’t have been handled by someone who transcribes like this. But at least they included an 8.

38. I sense a disturbance in the Force.

39. Plenty of boys would love a Ninja Turtles cake. 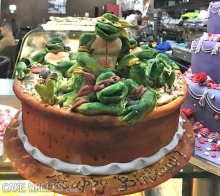 Guess that’s what they look like without their shells. Still, I don’t want to see that at all.

40. when it comes to baseball, please don’t include a bat. 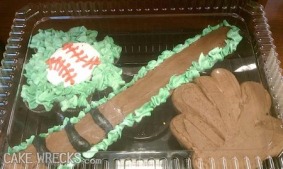 41. Hope Patrick doesn’t have a crappy birthday this year.

Apparently, he doesn’t mind having smiling turds on his cake. Still, it’s kind of hilarious.

This seems kind of cheap if you ask me. Seriously, you have to wonder about this.

43. Not sure what Derek’s friends think about him from this cake. 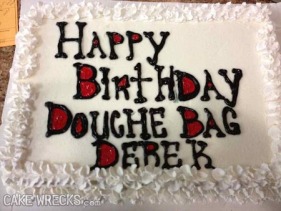 Of course, we all know what a “douchebag” is. Then again, it just might be a term of endearment in this case.

44. A little princess must have a Barbie Princess Tiara cake.

From Cake Wrecks: “All I see is a giant cat’s paw. Does Barbie have a cat? Is this somehow related? Am I over-thinking this? Where are you all going?”

45. Is that supposed to be a dragon head?

Actually I’m not really sure what this is supposed to be. A frog? A fish? An alien?

46. If you have a winter birthday, you might want a cake of a snowy landscape.

47. Well, at least that would be good news for anyone with celiac disease.

Though would you want that written on a cake? Probably not.

I think the family wanted musical notes drawn at the cake. Unfortunately, one decorator didn’t get the memo.

49. Apparently, Case doesn’t have a preference. 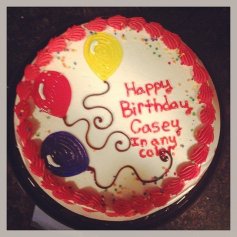 Yet, the bakery could use someone who doesn’t write down everything the customer says. Kind of detracts from the aesthetic.

50. What the hell happened to Scooby Doo?

Seems like the dog is on drugs or has been through a horrible accident. Hasn’t been the same since.

This was for a 12-year-old. But it’s clear they’re not a snowman. Because snowmen don’t last that long. Except on Hoth.

Note how it’s phrased like a question. Though they put the message on top anyway.

53. If you like Speedracer, this cake is for you.

Apparently, the decorator isn’t familiar with the material. Still, the first part is, “Go Peed Race” which is hilarious.

54. When someone wants sprinkles, you’d better give them sprinkles.

Yet, someone just wrote what the person ordered on the cake. And there are no sprinkles around it.

55. Seems like someone doesn’t feel fond of the birthday boy.

I guess this one was for a joke. Yet, why did the words appear in yellow?

Yet, we should know that while aged wine may peak at some point, it reaches a point of decline. Though such is life.

It says “Momther” as if they couldn’t choose between the two. That’s not even a word. Or should we add it to the dictionary?

58. “Rapunzel, Rapunzel, let down your hair.” But maybe not like that.

Instead, it’s written in red. But at least you can see a green balloon.

60. Someone must be a fan of NFL Monday night football. 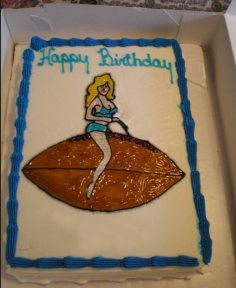 This one has a scantily clad woman riding a football. Not sure how that works, but I get the idea.

Because the cake has 40 on it. While the candles say 20. Not sure how that works.

62. Those are supposed to be balloons, by the way.

Yet, looking at them, they seem like black and blue sperm. Not exactly what you’d want on a cake.

Okay, that’s incredibly terrifying. Like something out of a nightmare or scary Asian theater.

64. They’re supposed to be brown balloons.

Though they more likely resemble turds with tails. Yeah, kind of shitty isn’t it? 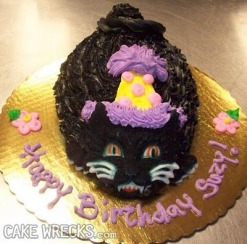 Actually, I changed my mind. In fact, this cat is quite terrifying, even with the party hat.

Yet, you wouldn’t get away with this in America. Since the drinking age in the US in 21.

67. When you turn 17, you shouldn’t forget to wear underwear.

Though when you’re 17, you shouldn’t be reminded on it. Least of all on a birthday cake.

68. Any kid would enjoy a monkey cake.

Okay, that monkey’s quite frightening. Not something for a 2-year-old’s party.

69.  Please use abbreviations for the months if you have to.

Yet, some people just don’t know how to take directions. So you get a message like this.

Also, it seems the candles are coming from the horse’s ass. Also is that a pile of poo behind it?

71. Looks like the racer has gotten into an accident.

Yet, the track looks quite messy for Motocross doesn’t it? Also I don’t think the racer will get out of the icing.

72. A Harry Potter cake will certainly bring out the magic. 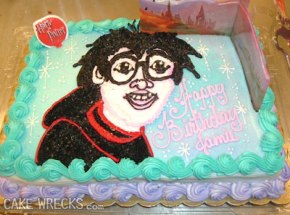 What the hell is up with his mouth? Seriously, that just looks really weird.

Okay, the bat should go. Seriously, the phallic imagery is apparent.

74. Nothing makes a birthday cake like one with your face on it.

I’d have to be an egomaniac to want that. Because this looks really strange if you ask me. 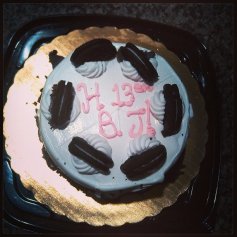 However, Superman looks more like he’s resting than flying through the sky to save people. Kind of lame if you think about it.

Not sure if showing support means whipping out a bra. Then I get it’s supposed to be a joke.

God, her head is quite misshapen on this cake. While her wings are quite small.

79. Perhaps a dog cake will amuse you. 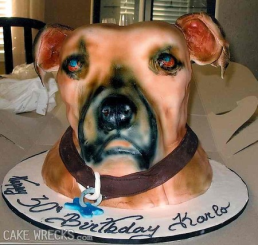 Okay, that kind of frightens me. Seriously, the dog looks like it’s about to bite at somebody’s heels in cold blood.

Though I’m not sure about the message. But at least they gave the unicorn a sweet pink mane.