Once again, we come to the pumpkin dioramas said to be one of the hottest trends this Halloween season. Sure most of the pumpkins are from craft stores for obvious reasons. But Yahoo.com touts these projects as a way for families to craft together as the decorating ideas are endless. But most of those I find on the Internet usually depict a haunted scene of some type such as a haunted house or grave yard. After all, Halloween is the biggest fall holiday. Some of them even light up like the diorama above and in so many colors for an eerie effect. You can have glitter pumpkins or ones that glow in the dark. So for your reading pleasure, I bring you another assortment of spooky pumpkin dioramas for Halloween. 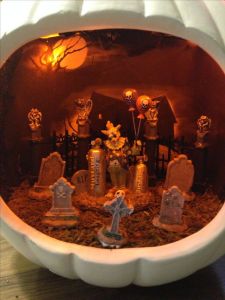 Well, if the clown was Pennywise, Stephen King would be proud. A perfect idea for IT fans. 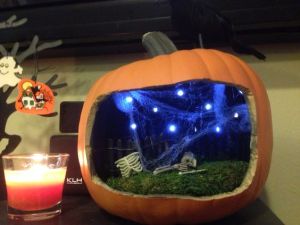 The sky on this one has cobwebs inside. Love how the lights are meant to resemble stars. 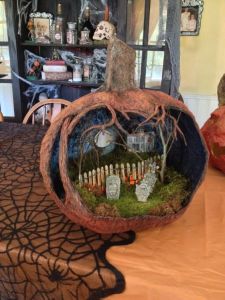 This one depicts a haunted house and graveyard. It even lights up from the ground.

4. This paper haunted house has a friendly ghost. 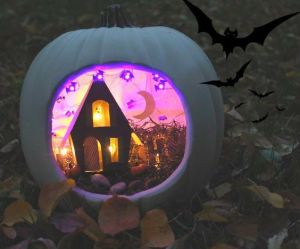 This one doesn’t seem very hard to make. Even has a little night sky in the background with purple light.

5. For a fairy, a pumpkin shell makes a perfect dining area. 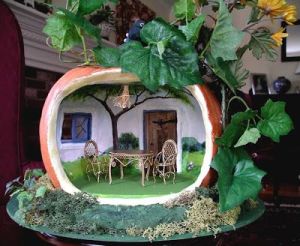 Well, this is more of a fairy house. But it proves that not all pumpkin dioramas have to be scary.

6. A pumpkin makes a wonderful place for your potions.

Sure none of them are fit for human consumption. But perfect for witches who want a place to put their concoctions.

7. If you’re a fan of Stranger Things, here’s a pumpkin diorama for you.

Sure this one uses very small figurines. But you can have fun with this for hours.

8. Eerie green lights are perfect for a graveyard shift. 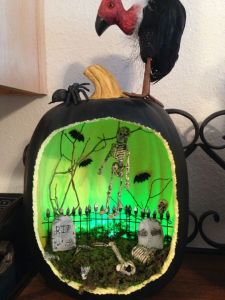 Though this one has a vulture on top. But the skeleton hanging on a tree is quite charming.

9. You’d find plenty of scary things at this haunted house.

The green lights inside make this quite spooky. But the ghosts really stand out amongst everything.

10. This cemetery is filled with mummies.

And it doesn’t seem to look like Egypt either. Guess whoever made this wanted to do something original.

11. Don’t mind these skeletons hanging during the graveyard shift.

Neither are quite buried. Though got to love the glitter night sky and orange star lights.

12. Every princess should have a glittery pumpkin carriage for the ball.

Maybe the Fairy Godmother was on to something. Still, like how it lights up inside.

13. How about a spooky Halloween time with these ghosts? 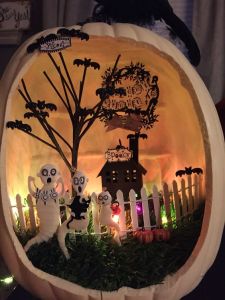 This one has ghosts in front of the fence holding “Boo!” More adorable than scary though.

14. Pumpkins are a perfect place for a tea between friends.

Sure it doesn’t seem like it’s made for Halloween. But little girls would adore this.

15. Seems like you’d find a lit haunted house on any dark night.

Well, that looks pretty eerie. The haunted house appears it’s from a store for a village.

16. Every Cinderella should have a pumpkin coach with pumpkin wheels.

This one has silver pumpkin wheels with a coach edged with jewels. Maybe not Halloween, but any princess will love it.

17. This skeleton gives no bones about potion making.

18. This skeleton is trying his hand in fishing.

And it seems he’s got a catch. Nevertheless, you have to admire the stars inside.

19. This haunted scene is within this jack-o-lantern’s smile.

Well, it’s kind of delightful. Though I think this one comes from a store for some reason.

20. This mouse has plenty of teas to offer.

But would you want any tea from a mouse? I wouldn’t think so. But this one is quite charming.

21. You might want to stay away from this haunted house. 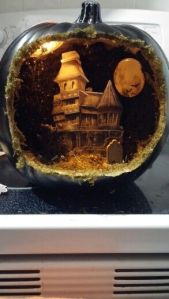 This is particularly the case if the edge is lined with moss. And yes, the light inside is quite eerie.

It’s also edged with lace with a tiara on top. Yes, it’s another pumpkin coach but it’s a rather intricate one.

23. A wolf howling at the full moon is a menacing sight. 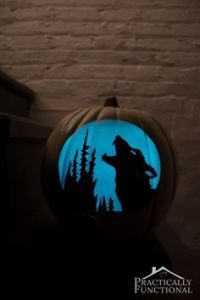 Okay, maybe it’s not the full moon. Though it’s quite scary enough even though wolves aren’t as dangerous as you might think. Well, as long as you leave them alone and don’t touch their pups.

24. Perhaps you might want to stop at this pumpkin house for trick or treating.

This one has all the trimmings with the ledge in the front. Though you wouldn’t want to go inside.

25. Come inside to find the pumpkin patch.

Okay, they mostly consist of inedible candy corn pumpkins. But this is a rather charming diorama kids would love.

26. Inside this pumpkin you’ll find the stars.

Contains a railing all lined with cats. On the edge, you have lights.

27. You can use a pumpkin to make your own haunted house.

Uses a cotton ball as a ghost. And it’s all painted gray with stairs and porch roof.

28. How about a graveyard with an imposing gate?

This one has a blue sky along with green light. Got to love the skulls on the imposing gate.

29. On a clear night, you might see a wolf howling at the moon.

You’ll find plenty of sticks inside as trees. And yes, the ground is made of moss.

30. Why make a haunted house of one pumpkin when you have 3?

Each of these is painted purple with towers. But you have to love this one.

31. You might not want to see a wolf howling in front of a haunted house.

Though wolves would normally avoid haunted houses and graveyards. Then again, that lone wolf might be a werewolf.

32. A golden pumpkin coach should always dazzle for the palace ball.

This even has horses and pumpkin wheels. Though the horses will turn to mice after midnight.

33. There’s some eerie orange light coming from that graveyard. 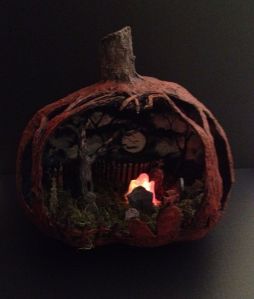 Seems like something’s rising from the ground. Don’t have a good feeling about that.

34. Beware what awaits at that haunted shack. 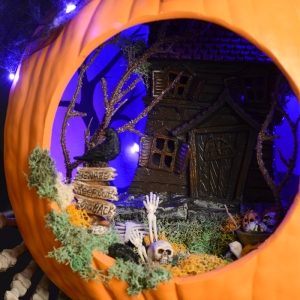 I can see a few skeletons on the ground. Might want to avoid if you dare.

35. A haunted house must have a mossy arch way with spiders.

This one has a putz house inside with candy corn trees, a lamp post, and a tree. Has a skull and raven on top. 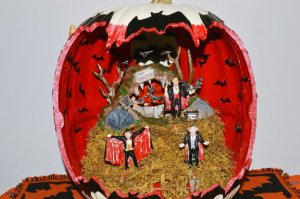 This is a red one with bats in the background. And if anyone stops by, I’m sure it becomes a real blood fest.

37. This skeleton is on his own highway to Hell.

Well, if you’re as skeleton on a motorcycle, that’s probably where you’ll go? Still, this is quite amusing.

38. The graveyard is a wonderful place to have a barbecue. 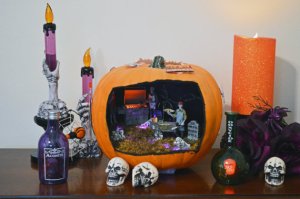 Hey, skeletons and zombies like to have their picnics. Though how’d they get a large grill in a cemetery, I’m not sure.

39. Seems like the Grim Reaper is on the prowl. 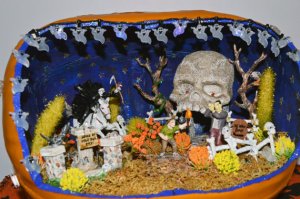 Well, if you’re in the haunted hollow, you’ll run into him at some point. And yes, he rides a white horse.

40. These skeletons are always willing to perform at Dia de los Muertos.

Okay, so it’s not a Mexican Halloween style pumpkin. But it’s a pumpkin diorama nonetheless that can be used for Halloween.

41. You will always have a good time at the carnival fun fair. 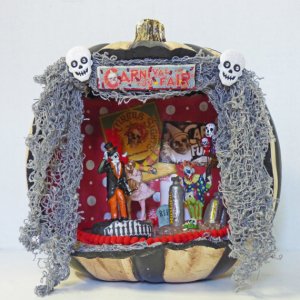 42. Here we have some Mexican skeletons playing in the cemetery.

Another diorama for Dia de los Muertos. Yet, you have to love the black and white flowers on it.

43. How about an undead serenade? 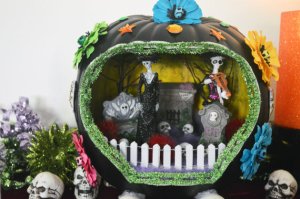 Yes, they seem to have a few Day of the Dead dioramas on Etsy. And this one is in a graveyard with a fence.

44. A fairy sleeps in a small pumpkin among flowers. 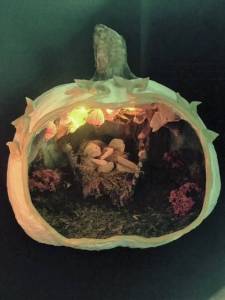 Another fairy pumpkin diorama. This is more suited for spring which isn’t a season for pumpkins.

45. In this diorama, the graves surround a mausoleum. 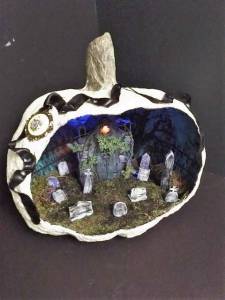 Yes, a lot of these are in grave yards. Decorated with a ribbon and jewel on the outside.

46. Might not want to cross this Ent in the cemetery at night.

This one is made of ceramic. Contains a clever spooky sign and moss.

47. All hail the ghoulish Pharaoh of Egypt.

Wonder if Ancient Egypt imagined the afterlife like this. Still, you have to like the skeletons in Egyptian garb.

48. On Dia de los Muertos, you can’t do better than these pumpkin dioramas. 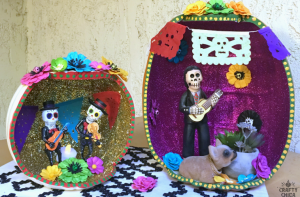 This one has skeletons serenading along with flowers and other decorations. The shells are decorated with glitter.

49. May these skeletons be together till death.

Oh, I forgot. They’re dead. But you have to love the lighting and the glitter on this one.

50. Fall is always a time of year for deer in the forest. 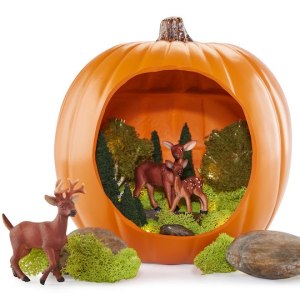