Now it’s on to vintage Halloween greeting cards. Whenever I do a post on holiday greeting cards, I usually go for the vintage lot mostly since they have a lot of crazy imagery that don’t hold up in contemporary times. Not to mention, people sent greeting cards to each other way more often than today. Well at least it seems that way. Halloween cards are no exception. Many of these cards use very creepy illustrations sometimes depicting stuff that doesn’t make sense to the modern eye. Sometimes figures aren’t drawn right that they look unintentionally creepy like children. And sometimes the inscription might contain a suggestive message correlating to the image, which I most often see on vintage valentines. Some of these cards could be outright offensive at a demographic stand point. But regardless of what you might see, you’d probably wouldn’t send these cards to a loved one any time soon. So for your reading pleasure, I give you another treasure trove of vintage Halloween cards time forgot.

Though I think the cat’s more freaked out by the kid who’s threatening to whack him with a broomstick. Though that jack-o-lantern is creepy.

2. Nobody’s happier on Halloween than a pumpkin head child with gold teeth.

However, this pumpkin kid has inspired countless nightmares ever since. Seriously, anyone would be freaked out by this.

3. Halloween is always a time of year to casually converse with floating jack-o-lanterns.

Because there’s nothing crazy about talking to floating pumpkins under candle light. Okay, little Jimmy may be a little eccentric. But please understand him. 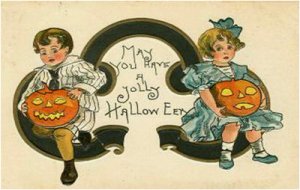 However, neither of these kids holding pumpkins seem jolly. More like the kids who showed up at a Halloween party without a costume.

5. Flying a broom at night is thrilling for this pumpkin head kid.

Not sure what’s creepier. Seeing a crone witch flying on a broom in the sky or this. At least flying witches don’t give you nightmares.

6. If you let the candle drip in the water on Halloween, the face of your soulmate will appear. 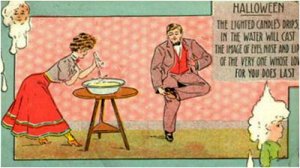 Guess this is a superstition but I don’t think love works that way. Also, how is that guy sitting without a chair? 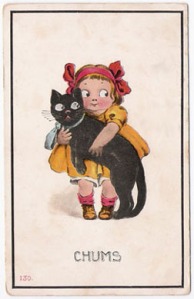 This girl’s like “I’ll love em’ and squeeze em,’ and keep em’ forever and ever.” Cat makes a face like someone in a hostage situation. 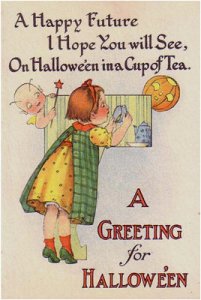 Not sure if I can go on with that idea. Still, hope the girl doesn’t look at that fairy. Eeek.

The fact these have pumpkin and squash heads and human bodies make them terrifying enough. You could almost make a horror movie with these. 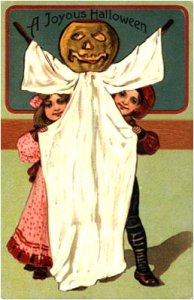 Because he’s the only thing keeping you safe from these freaky children. Their smiles are particularly menacing.

11. Terrifying boy with broomstick wishes you a jolly Halloween.

Looking at that kid’s face makes me feel for the whimpering jack-o-lantern. Hate to think of what that boy will do with that broom.

12. Demons and squash people relish in a Halloween feast.

I don’t know why these squash people exist in these Halloween cards. Yet one really seems to enjoy the chocolate box. 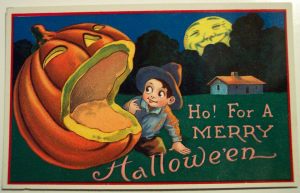 Seems like the jack-o-lantern wants the kid to climb into his mouth in order to devour him. And the moon’s relishing watching the whole thing. Maybe Linus should be glad the Great Pumpkin never came to his neck of the woods.

14. You can’t have a Halloween party without inviting a small moon man.

I’ve heard of the man in the moon. But I had no idea that he had a human body and wears a suit. Still, seems to like tall girls fro some reason.

15. “Pumpkin head I would like to be/If in your arms you would take me.”

Look, I know this is supposed to be a card someone sent to their sweetheart. But the terrifying pumpkins in the background just freak me out.

16. Stay safe on Halloween and watch out for flying jack-o-lanterns. 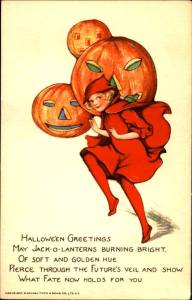 And you thought the wolf was bad enough for Little Red Riding Hood. Run for your life from those pumpkins! For they will only bring you death.

17. Apparently, nobody wants a visit from the jack-o-lantern ghost.

Still, I’m not sure if the jack-o-lantern is really a head. Or if it’s just on top on its head. Maybe I don’t want to know.

Yet, the man in the moon always likes to gaze at the young witch’s best attributes. Which makes the cats terrified and brings scorn from the owl.

Guess someone’s not in a scary mood this Halloween night. Not sure what the witch and small scarecrow think otherwise.

However, a white girl dressed as an Indian falls under cultural appropriation. Not exactly offensive like the Cleveland Indians logo but still.

Yet, black cats seem to be afraid of everything. This one absolutely dreads a small child’s embrace and for good reason.

22. “On All-hallows Eve,/When the hour is late,/Pull a root from the garden/And meet your fate.” 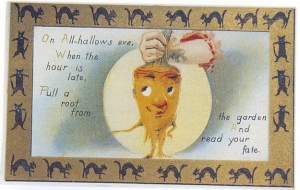 Yet, a root with a face and appendages just defies all concepts of biology. Also, what’s this about pulling up root veggies for Halloween?

23. May you see your dream boat in your mirror on Halloween, thanks to witch coming from a pumpkin.

She’s probably freaked out by the witch coming from the pumpkin. Though she might want to look at her ginger dream guy in the mirror. Yet, she’s not paying attention.

24. There’s nothing more fun on Halloween than stealing the occasional jack-o-lantern.

And those trick or treaters should be lucky that the policeman chasing them doesn’t have a gun. Though the ghost kid looks straight out of a horror movie. 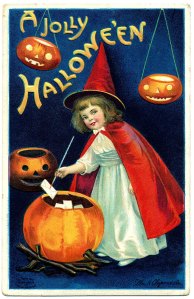 However, as she sorts her mail, she devises her own little evil plan. So if you see her, you might want to run away from her like hell.

26. Sometimes even witches wouldn’t want to go near a pumpkin headed scarecrow.

Though this guy doesn’t seem able to go anywhere so he might want some companionship. Then again, we’ve probably heard all about Donald Trump’s sexual assault allegations. So I wouldn’t blame the witch here.

27. Everyone always wants to take part in a Halloween parade.

However, you wouldn’t want to take part in this procession. And the fact the pumpkin lanterns also seem to enjoy it only inspires more nightmares. Seriously, why?

28. “At twelve o’clock you must be ready,/And hold your pumpkin good and steady/For by its rays of candle light/On Halloween all things are bright!” 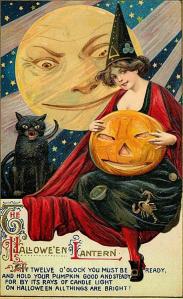 However, the moon behind this witch seems to give her a massive pervo stare. Wonder why she doesn’t feel uncomfortable here.

29. Halloween night might startle you with an occasional fright once in awhile.

30. “The time has come/For the witches’ dance,/And the spooks from far and near/Will gather and make merry/For Halloween is here.”

Though being stared down by a giant jack-o-lantern cannot be a pleasant experience. The green goblins look kind of freaky, too.

31. Remember if you go out alone on Halloween night, you’ll be in for a fright. 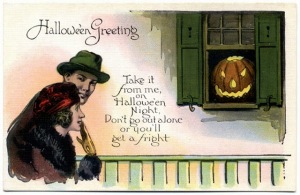 Yet, that couple might not want to mind the terrifying jack-o-lantern in the window. Kind of seems evil for some reason.

Though they sure look terrifying eating it. Still, I swear these guys were a product of some 19th century drug trip.

33. On Halloween night, don’t miss the charms of the witching hour.

Yet, that laughing pumpkin moon just gives me the creeps. And I think the white cat agrees with me.

34. Nothing beats trick or treating on Halloween. 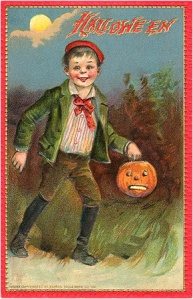 Not sure if this kid’s even wearing costume. Then again, he probably doesn’t need one since he looks pretty terrifying already.

35. A witch’s cauldron should always bring all the spirits in  view.

Yes, those faces will give you nightmares. But what’s with that masked person?

36. “Could I borrow a witch’s flying machine/I’d visit you on Hallow’een.” 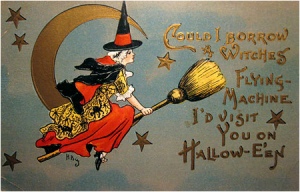 Yet, this witch doesn’t seem to fly her broom right. Apparently, the broom part is supposed to be down.

37. Apparently, nobody wants to see flying jack-o-lanterns on a cow.

Well, if I were that woman, I’d be flipping out in fright, too. Those jack-o-lantern smiles are just terrifying. 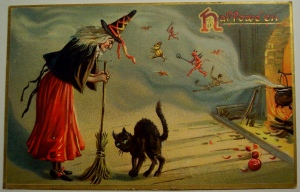 Then again, it’s not like I’d blame the cat for anything. Because I thought those cauldrons were just for magic potions.

39. If you want to know your fortune, pull out a beet from your garden at midnight.

Still, the gnome fairy is just incredibly freaky looking. Also, going out in your garden for a beet to read your future? What the hell?

40. No feat is greater on Halloween than carving a giant pumpkin in the patch.

Now we know where the Great Pumpkin came from. Still, can’t really see a kid doing this. Also, you don’t see a lot of stuff lying around. I mean don’t you have to shell out the contents first?

41. If you look in the mirror on Halloween, the fiend will show you the person you marry.

Though I wouldn’t want to look at the white fiend behind if I were him. Also, I don’t think he’s pleased with what he’s seeing.

42. Beware what you find in that old grandfather clock. 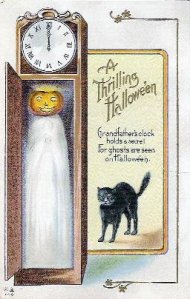 Seems like the cat looked and its fur already stands on end. Still, bound to give you nightmares.

43. Keep an eye out for ghosts on Halloween night. 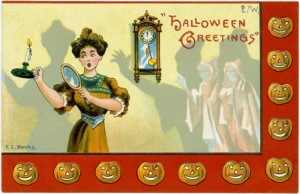 And yes, the ghosts seem like they’re straight out of some horror film. One of them is about to reach for that woman’s shoulder. Freaky.

44. You can always make merry on the drum on Halloween night. 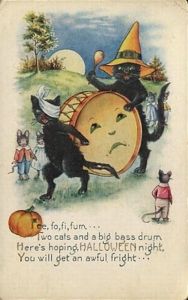 However, the drum doesn’t seem to look happy at all. Also, the cats are parading around mice, which they eat.

45. You never know what you’ll run into on Halloween night. 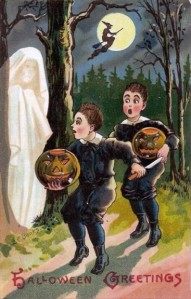 Or who will be coming home with brown on the seat of their pants. Though seeing a ghostly figure in the woods will freak out just about anyone.

46. There’s nothing scarier than being chased by a jack-o-lantern on legs.

Yes, you’d probably run away from that, too. But the kids seem substantially creepier to me, especially the one getting trampled.

47. Bobbing for apples is always a wholesome Halloween activity.

Though this guy’s wondering which of the twins he wants to make out with. Or he just wants to gape at one of the girl’s drenched pink dress. 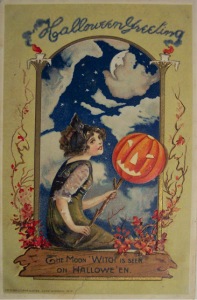 Surely wouldn’t want to see that guy riding on a broomstick upside down. Yet, the woman with the jack-o-lantern doesn’t seem to mind. 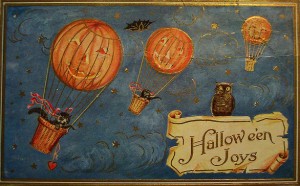 Even the owl can’t believe what it’s witnessing at the moment. Yes, that’s probably inspired by some drug trip.

50. As you know, jack-o-lanterns can come in so many faces.

Yet, each one of these pumpkins is rather eerie in its own way. Particularly if they have teeth.