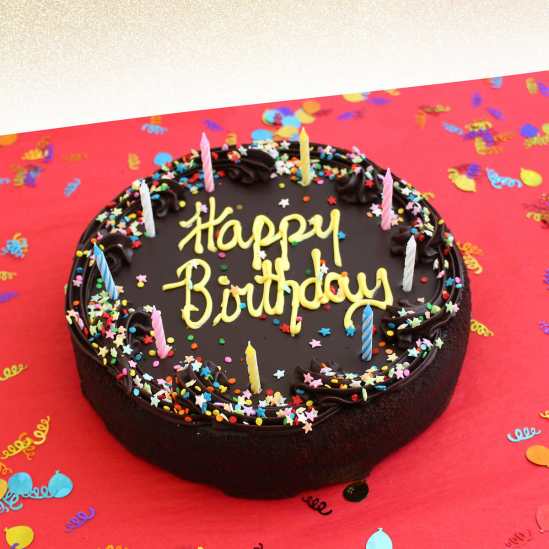 On January 13 this year I will turn 30 which makes me a bit on edge. On one hand, I get presents and have a special day all about me. On the other hand, I feel like I haven’t accomplished much as I should by this point in my life. Anyway, I decided to dedicate it the way I usually do with a bad birthday cake post featuring some really terrible disasters from Cake Wrecks. Now when you go to a bakery, you expect that everything is made to your specification. But since we have sites like Cake Wrecks, this doesn’t always go that way. Since the cake decorators aren’t going to be from some prestigious cake decorating academy. And some don’t even know how to follow directions. So for your reading pleasure, I give you another assortment of birthday cakes gone wrong.

Because the thumbs look quite different. Also, that doesn’t look like a 6-year-old girl to me for some reason.

Don’t just write it in multi-colored icing. But did the cake decorator listen? No.

3. When you have a cupcake cake, put the phrases in different bubbles.

Because if you write across, the saying may look like this. And let’s just say, it’s kind of off so to speak. 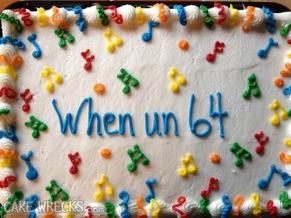 But instead it says, “un.” Yeah, that doesn’t make sense the least bit.

5. A clown cake is always great for a kid’s party.

Okay, more appropriate for a kid’s Halloween party. Also, does that clown look dead to you? Seriously, it’s creepy.

Yet, it’s on top of some green icing. Nobody knows what it says to this day. 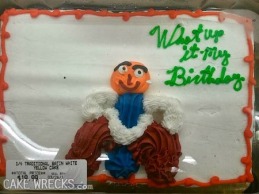 Though I don’t know what the hell this figure’s doing on here. Is there a Sesame Street muppet I don’t know about? 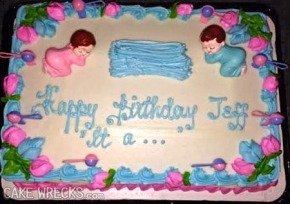 Okay, we know Jeff is a boy. The icing is in blue. Also, Jeff is a boy’s name. Seriously, I have 2 uncles by that name. 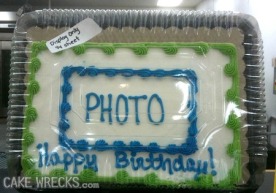 Uh, isn’t that supposed to be the bakery’s job? Don’t they have a special design program for that? Just asking because I know they put photos on cakes somehow.

10. No girl is ever too old to be a Disney princess. 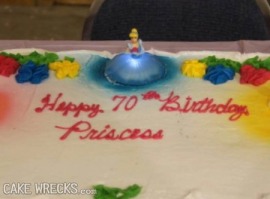 But 70 is kind of pushing it. Then again, it her birthday. She can have any cake she wants. If she wants Cinderella, fine.

11. Happy Birthday to a special boy.

That basically all it says. Because we don’t really know the guy’s name.

12. Hope you enjoy your Birthcay, whoever you are.

Yeah, “Birthday” is mispelled. Despite that spelling it isn’t that hard. Wonder why that is.

“Birthday” is definitely spelled wrong. Yet, what is that name below? Kathy W or Natty W?

And apparently, this bakery doesn’t know any but English. Though they wrote the instructions.

Oh my God, what the hell is that thing? Seriously, that looks more like a demon with bee stripes? And no, I’m not calling it Sting.

But this Mickey seems rather skeevy for some reason. Seriously, I don’t like the look in his eyes like he’s out for trouble.

17. Does this cake decorator have any idea about spacing?

Seriously, the words are all together. Also, who the hell named their kid Prudy in the 1980s and 1990s?

Though this one doesn’t look anywhere near finished. Or part of the design ripped off. Either way, looks rather sad.

Make sure the words are in purple icing. As the cake says here.

20. Make sure you have “Happy Birthday” on both of these.

Well, they delivered. But someone took the instructors way too literally. 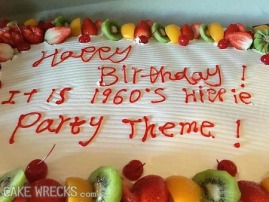 And what better than to have it on generic fruit cake. No tie dye, peace signs, or psychedelic patterns whatsoever. 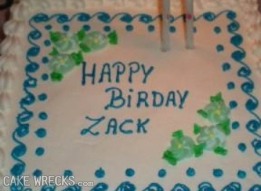 Yes, “Birthday” is mispelled again. Not sure why this keeps happening. Seriously, all bakeries should have spell-check.

Apparently, this cake decoraor doesn’t know it. Despite the fact I’ve heard it my whole life. Also “Birthday” is misspelled.

25. A plain grass cake will always do.

Then again, this seems more like an abandoned pavement theme. Why anyone would want that, I don’t know. 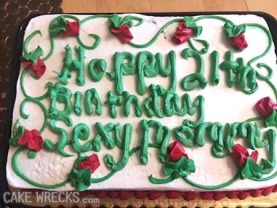 27. I guess someone wanted a maritime themed cake.

Instead, Mark got a garden carrot cake. Hope he doesn’t throw a tantrum. But at least the sea is written in.

But dino apocalypse cake, not so much. Seriously, these dinos can go extinct at any moment. The foliage already has died. 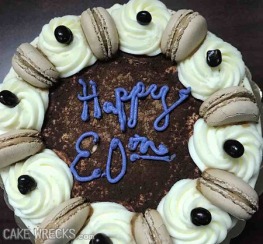 Yet, the 3 is on backwards. How is that possible? Seriously, does someone not know how numbers are written?

30. This ghosts wishes you a scary happy birthday. 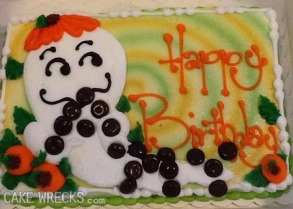 What’s that ghost holding? Is that shit? Is the ghost covered in shit? God, that’s disgusting.

Okay, this cake was written sideways. So instead of a winter scene with a tree, it’s basically a winter scene revolving on a shit puddle. Given how the branches seem to resemble the stench.

But this one has too many car rings. Seriously, you can space them out more.

For one, the decorated doesn’t know how to draw a bra as you can see? Also, this is a very inappropriate cake for a 10-year-old girl.

And I don’t think this is a shamrock. Seriously, what the hell is that?

As this cake specifies. But the words in parentheses make that very clear.

36. Make sure you have the letters in the right color. 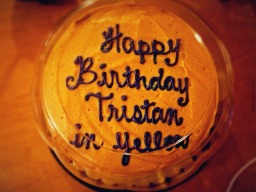 And yes, the inscription is in purple icing. And yes, it’s as instructed. 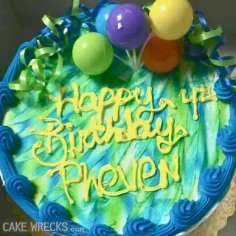 But you wouldn’t know it from how is name’s spelled. Let’s hope he doesn’t know how to read. Oh wait, he might.

39. Perhaps a Barney cake could cheer you up.

Okay, that doesn’t look like Barney. Just a giant purple lizard, which may not be a bad thing.

Who the hell are these ladies? Because they sure as hell don’t look like Golden Girls. Seriously, what the hell?

41. Apparently, someone doesn’t know how to draw a playing card. 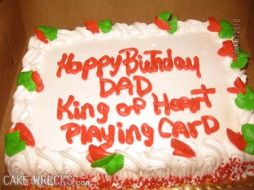 To be fair, they asked for a King of Hearts card as it’s written. But that’s not what they got.

But did they really have to write it on there. Seriously, kind of creates an awkward situation with the customer.

Not sure what that means. Because it makes absolutely no sense whatsoever.

Uh, Twilight’s not anime. Seriously, I don’t care for Twilight and even I know this. 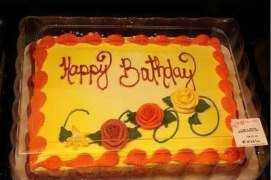 Yes, that’s another misspelling of “Birthday.” Because bath days aren’t really that special for a cake.

46. Any little kid would adore a cake of Cookie Monster. 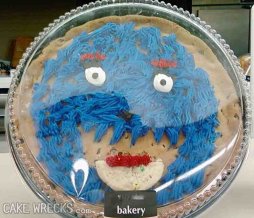 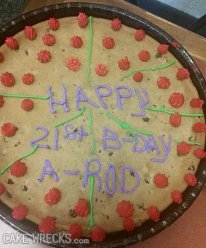 Not that A-Rod. Still, a pepperoni pizza it does not resemble in the least. The red icing bits aren’t flat circles.

48. A lot of kids love a Minecraft cake.

Not that A-Rod. Still, a pepperoni pizza it does not resemble in the least. The red icing bits aren’t flat circles.

49. A girl hunter might prefer a pink camo cake.

Seems like someone didn’t know how to put them together. Hope my neighbors’ granddaughter never gets one like this.

50. You can see how many little girls want an Elsa birthday cake.

Though I really don’t care for hat hair. Seriously, Elsa’s hair looks like it’s made from Cool-Whip. Doesn’t look good.

Yes, someone wrote that inscription while that cake’s upside down. So that’s why the balloons look like that.

52. A minion cake on the beach might be great for a kid’s party.

Still, the beach the seems to have a rather phallic disposition. Hope the parents can get a laugh out of that.

53. A first birthday cake should always be simple. 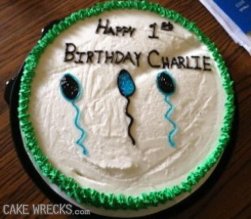 Yet, the balloons apparently resemble sperm. Sure it’s for a boy, but it’s pretty inappropriate.

54. Apparently, placement is the key.

Okay, maybe not. But the cake can use some spell check. Also, it’s in pink icing.

55. Seems like you can find a birthday cake of Jabba the Hutt. 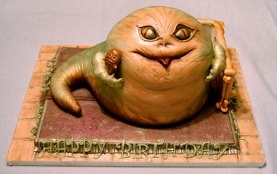 Uh, Jabba doesn’t look like that. He’s much more disgusting. Also, can we rather have a cake where Leia strangles him with a chain? Since that’s far more satisfying. 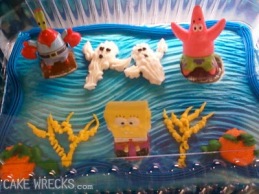 What are those white cactus creatures doing here? Are they ghosts? Is SpongeBob’s ocean haunted? Oh, wait, this used to be a Halloween cake.

57. I guess this kid gets beat up in school all the time.

I’m sure the kid’s name is Peter. But I hope this cake wasn’t for a kiddie party. Because he’ll never live it down.

I’m they wanted “Happy Birthday” sticks on the cupcakes. But they got this instead for some reason.

I’m sure it’s supposed to be “Jocelyn” or “Jacklyn.” Apparently, this decorator didn’t know which name to use. So we get this.

Yet, this one says, “Ha’ penis.” Let’s hope she’s not a lesbian for obvious reasons.

Well, this doesn’t resemble the logo. More like an unfinished peace sign. Yeah, you have to have the slices be all equal and in silver.

But this more or less resembles a melted snowman with spray paint. Not the Japanese cartoon icon.

This dragon looks pretty lame since it doesn’t dazzle with ferocity. More like a snake with spikes.

64. Of course, people can sometimes forget your birthday.

Guess this is a workplace. Still, did anyone have to rub it in their face that nobody cared about their birthday? Seems kind of mean-spirited.

65. Kind of a frilly birthday cake for a guy named Bob.

Because I don’t think he’s 10. Unless the people buying this cake are his pets or toys. Seriously, why?

67. Ranger Bud Yee Haw has a thing for flowers. 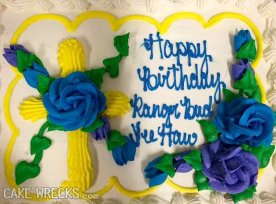 Actually that’s a leftover Easter cake made into a birthday one. But the inscription is kind of hilarious. Also, this was supposed to be cowboy-themed.

You can see words, “On the top” and “Below.” Kind of ruins the effect, doesn’t it?

69. This Flash themed cake is rather minimalistic. 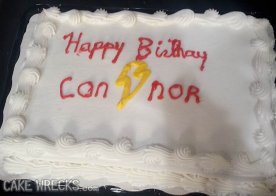 This one has a lightning bolt slicing the name Connor. Nothing else.

70. Perhaps a young girl would like a butterfly cake.

Actually the age of consent is 18. Still, this kind of gives a rather disturbing vibe. Seriously, what the fuck?

72. Arthur wanted a Mercedes Benz cake for his birthday.

Now this is the kind of 60’s hippie party cake I’m talking about. Okay, the logos don’t quite look like peace signs. Yet, it’s probably not what this guy wanted.

73. Someone wanted a My Little Pony cake.

And they didn’t get what they wanted. Since this cake just says, “My Little Pony.”

74. How about a birthday cake text exchange?

Seriously, is this really necessary? What if it says anything embarrassing?

75. Any boy would love an Avengers birthday cake.

What are Iron Man and Captain America doing with Jes- wait, that’s supposed to be Thor? Still, it looks like something a kid would draw. 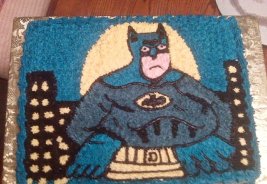 This one features a sad Batman with a weight problem. His hands are unusually large for his arms as well.

Not sure what this is supposed to be. But it resembles a turd floating in the ocean.

78. Any girl would enjoy a unicorn cake.

However, this one doesn’t necessarily say “Curt.” I’m sure the kid will have a lot of questions on that special C-word that’s an insulting slang term for female genitalia.

80. Everyone must love a Star Wars cake. 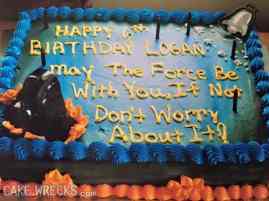 Okay, this message isn’t really seem appropriate to a Star Wars fan. Also, the kid’s supposed to be 6. Why?