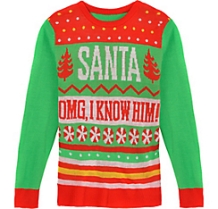 Buddy the Elf said this line. Since he grew up in the North Pole as an elf.

2. A candy cane striped sweater should always have a tinsel wreath.

Well, it’s green tinsel. Though I have to wonder whether it lights up. 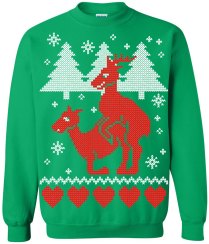 Indeed, these are 2 deer humping over the holidays. Wonder how they managed to withhold their sex drives during hunting season.

4. Fans of A Christmas Story will adore this holiday sweater. 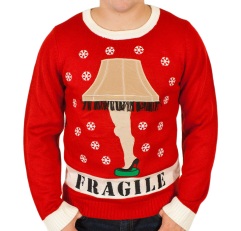 It’s the infamous leg lamp. Indeed, before that film’s release, it was basically something you’d find in a bar. Not anymore.

5. Perhaps you’d like a teddy bear on your Christmas sweater. 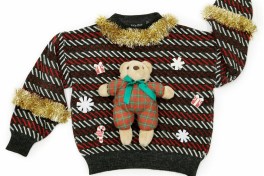 This one has golden tinsel on the sleeves as well as presents and snowflakes. The bear wears a plaid onesie, too.

6. Best to get out the Christmas craft supplies. 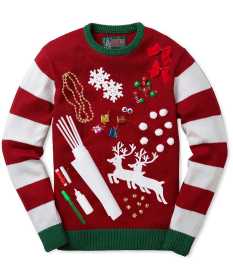 Yes, there’s am ugly Christmas sweater with craft stuff. Makes you wonder how the final product will turn out.

7. Ever heard of a Christmas llama with sunglasses?

Here it wears a white and green scarf. And is that holly or mistletoe?

8. No Christmas sweater can have too many pointsettias.

His sweater even depicts a bouquet. And I can’t tell whether he’s proud of it or utterly embarrassed.

This guy has a sweater depicting those old Christmas specials from the 1960s. As the Bumble dons a Santa hat.

10. Take Christmas to the next level in an ugly Christmas suit. 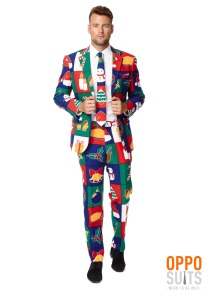 This one has pictures of Christmas icons. Even comes with a matching tie.

11. Christmas is always the season for sloth.

This hoodie has a sloth on it. Donned in a Santa hat, it has a present for you.

12. You’ll run a gamut of emojis during the Christmas season.

This one has faces in Santa hats with a variety of expressions. Some even have their tongues sticking out.

Though the dinosaurs died out long before Jesus was born. Includes rows of lights, candy canes, trees, and snowflakes.

14. On Christmas, Jesus is always the life of the party.

Since Jesus is the birthday boy. Also, he wears a party hat, too.

15. Would you like a shot or a beer with Santa?

Looks like Santa Claus may have a drinking problem. Hope he doesn’t get busted for flying his sleigh under the influence.

But this time the reindeer’s driving a car with a Christmas tree on top. Still, that’s pretty brutal.

17. Ever seen a mermaid Santa before? 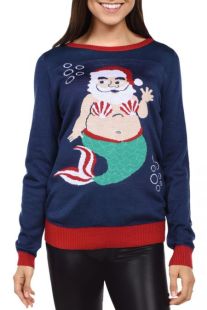 Yet, Santa seems to wear a seashell bra on his man boobs. Not that there’s anything wrong with that, it’s pretty unsettling.

18. Feel free to wear what you want on your Christmas dress.

Her dress is even trimmed iwth white boa feathers. While she even wears an animal print Santa hat. 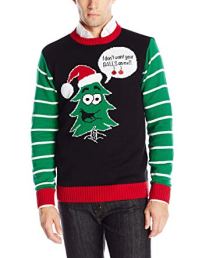 Says, “I don’t want your balls on me!!” I’m sure anyone over a certain age will get this one.

20. Santa always loves to show off his stuff. 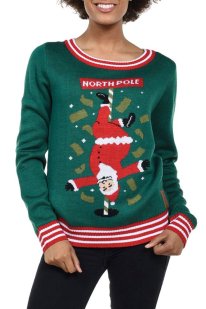 Apparently, the North Pole has fallen on tough times lately that Santa had to get a second gig. But at least he’s fully clothed.

If it’s Santa’s junk, then I don’t want it. Besides, doesn’t he have a Mrs. Claus to come home to?

22. This year, Christmas is out of this world.

Since this Christmas sweater depicts an alien in a Santa hat. Makes me wonder how aliens could celebrate Christmas though.

23. Make this Christmas a Hamilton Christmas. 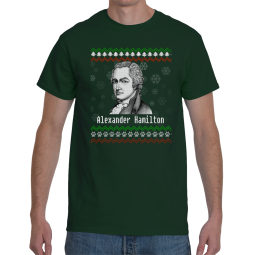 I’m sure they made this because of the musical. Because Hamilton doesn’t have much to do with Christmas besides being on the $10 bill.

24. Never thought I’d see a Christmas squatch in a bikini. 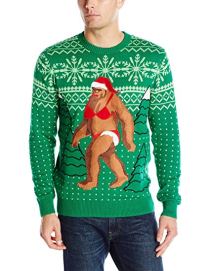 Then again, I’m sure that female sasquatches are possible. That is if sasquatches really exist.

25. Nothing makes the holidays like a sweater with dinosaurs.

The dinosaurs are green wearing Santa hats. Some on their tails.

26. When it comes to Christmas trees, some wear it for the party.

27. A Christmas sweater can never have too many trimmings.

This one has golden tinsel and fake holly and poinsettias. Perfect for any tacky sweater party.

28. A Christmas cat always goes for the mice.

Here the cat hangs on a tinsel wreath. While catnip hangs overhead. 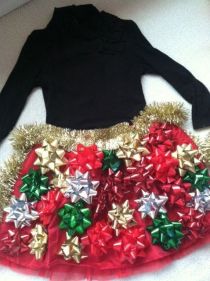 This one is covered in gift bows. While the upper hem is edged with golden tinsel.

30. Want a game of Christmas pong?

Well, it’s like beer pong. Except all the cups are on the guy’s Christmas sweater.

31. Nobody can wait to meet Santa.

This one has Santa visiting the kids. And they’re all crying for presents.

32. You can always be a hit at Christmas with a hunting vest.

This one has a large jingle bell and Rudolph in a stocking. While the vest is edged with garland.

33. Apparently, the Grinch can be quite handsy. 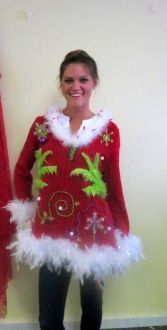 Well, the hands are made from fuzzy feathers. So is the trim as you can see. 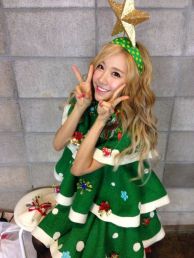 Since she’s wearing a Christmas tree dress. While her star is in a headband.

35. Move over, Jon Snow, for Santa Claus is King of the North.

Here he sits on his candy cane throne. Yet, the Whitewalkers have nothing on him.

36. Can Santa pass the eggnog to Jesus?

But Santa is a selfish asshole. So Jesus isn’t exactly pleased for making a sign for Peace on Earth.

But Santa doesn’t really seem to care. While his friends abandon him.

38. Didn’t know you could wear a gingerbread house. 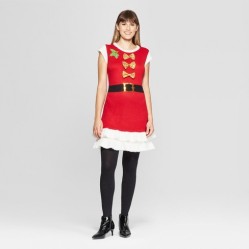 Here she wears gold bows and a belt. Though she wouldn’t last in the winter cold if she didn’t wear a coat.

40. Santa comes through the mountains on his light-up T-Rex.

I know this is crazy. But if you like Christmas and Jurassic Park, this sweater is for you.

41. Bet you didn’t hear about the Christmas walrus. 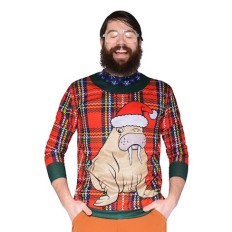 Well, walruses do live near the North pole. Though this one has a Santa hat and looks quite confused. 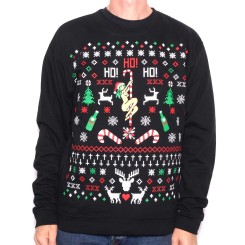 Mainly since this sweater depicts a stripper. Not necessarily one you’d want to wear around your folks.

For the T-Rex should get all the presents. I know this one is pretty crazy in any case.

44. Nobody can resist a Christmas suit with puppies.

This one has puppies in each red and green square. So he’ll get plenty of chicks at the party. Or so he thinks.

45. A poinsettia suit will really stand out.

Here he holds a hobby horse for good measure. Though I think the suit makes him too bright for Hawaii.

I don’t think that’s a good thing to be. Then again, it’s not meant to be serious.

47. A Christmas suit should always have ornaments and lights.

After all, this is a Christmas tree camo suit. Though I’m not sure if he blends in.

48. A gingerbread man is ready to be baked. 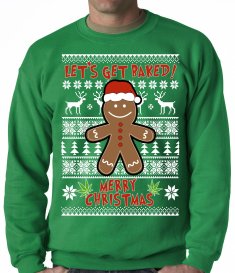 Yet, this is a Christmas sweater for potheads. Just look at the pot leaves to see.

49. Don’t forget to sleep in these yuletide boxers.

This one has a tie somehow. While Santas are on the side. Not sure what to think of this. 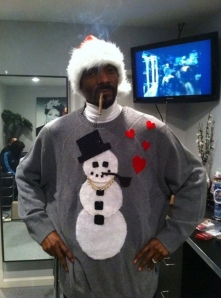 I think that’s supposed to be Snoop Dogg wearing this. Also, Frosty’s wearing a gold chain.

51. Zombies are no match for Santa Claus.

Here you see Santa with an assault weapon in the woods. And yes, he’s a zombie sleighter. Get it?

52. Even reindeer can drink too much at a party.

Apparently, this reindeer’s going to hurl. Didn’t know they party hard like that at the North Pole.

This one has a reindeer body that you put your head in the hoody. Wonder if it has antlers on the hood.

54. Nothing makes Christmas like a cat on a slice of pizza.

The pizza slices even travel through space. While one is decorated with ornaments.

55. A reindeer head should always have a wreath.

This guy seems quite proud of himself. Includes baubles on the wreath. While the reindeer is plush.

This is from A Christmas Story since Ralphie wants a BB gun. More of a jersey, but it counts.

57. Hope you have a merry Griswold Christmas.

On the other hand, you might want to stay the hell away from the Griswolds during the holidays. Seriously, look what happened to their neighbors. 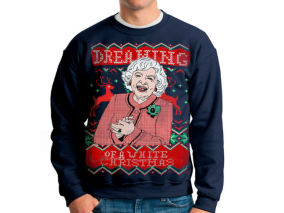 Well, Betty White Christmas anyway. Other than one with snow, it’s the best kind of Christmas.

59. Even Santa Claus needs to take an occasional pit stop. 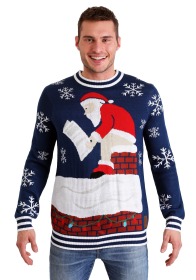 Here Santa goes to the bathroom on the chimney. Either the kids have really been bad or the parent works for the Trump administration.

Since there are presents on her Christmas dress. While her skirt is covered in holly and ornaments.