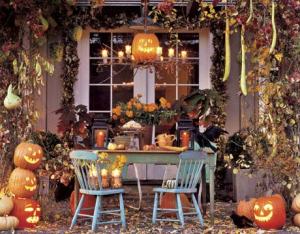 Of course, autumn is in the air and Halloween will soon be upon us before we know it. A lot of people relish in Halloween who tend to get all up in the festivities. I mean many of them dress in costumes as well as decorate their homes in the Halloween spirit. Yet, for those who plan to decorate for All Hallows Eve, you might want to be mindful of your neighbors if you want to be decked out around your house. I mean though you can go for scary, your decorations must be inoffensive and kid friendly because you never know what kind of trick or treaters you may get. If not, then you’ll probably find your Halloween decorations on the news stirring controversy which you don’t want. Nevertheless, for those who want to be creative, here is a nice little how-to on what and what not to do.

Do: A Halloween display of your favorite franchise.

Sure neighbors may think you had too much time on your hands while doing a Star Wars scarecrow display but at least some people would like it.

Don’t: Do a lawn display that could lead the neighbors to dial 911.

It’s said that the neighbors actually called 911 for this all too realistic decor of people getting run over. Don’t do this.

Do: Have decorations that were inspired by clever puns. 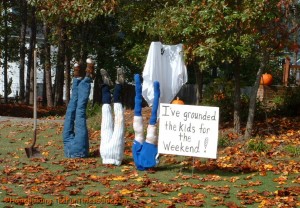 While this display may make neighbors question your parenting skills, I’m sure it’s nevertheless in the spirit and funny.

Don’t: Have Hallwoeen displays that include execution methods no matter how cool or scary the idea may seem.

Because you never know where your neighbors and guests may stand on the death penalty. Seriously, don’t do this.

Do: Displays with skeletons enjoying the pleasures of life.

Just a nice quiet afternoon open air picnic with Mr. and Mrs. Bones. I’m sure the neighbors won’t complain though they’d wonder where you got the skeletons from.

Don’t: Use hangings for your Halloween display unless they’re naked skeletons and not with rope by the neck. 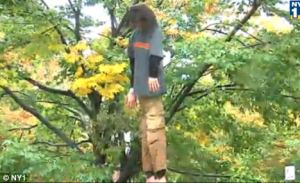 Because an image like this can cause a lot of unpleasant feelings for people who may be anti-death penalty, know people who’ve tried killing themselves this way, actually have attempted suicide this way, or are African American. If they are the last part, then be warned that such displays may remind them of that old kind of racist hate crime used on them during the Jim Crow era. So don’t do this.

Do: Be eco-friendly and use any leftover supplies you may have. 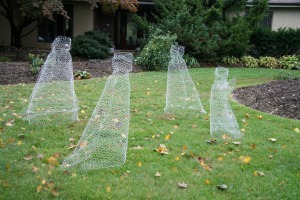 Using old chicken wire to create ghostly dresses isn’t just creative, it’s also good for the environment as well. Besides, you can use these decorations again and again.

Don’t: Use your daughter’s baby dolls for your Halloween display or mutilated doll exhibit.

This just goes too far as scary goes. Besides, this might traumatize many trick or treaters, especially young girls. This is just plain sick if you know what I mean.

Do: Go with a ghost coven in your yard.

Now this isn’t just spooky but also rather eco-friendly, simple, and clever. 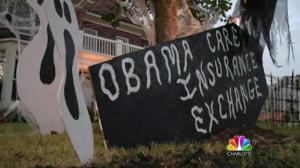 I know that Halloween isn’t too far from Election day. As a Catholic I’m perfectly fine with Halloween religious displays since well, there’s a lot of creepy religious stuff. But it’s only as good if the religion your mocking is your own, Christianity, cults, Neo-Paganism, Wicca, or Satanism. Yet, as a Democrat, for the love of God, don’t incorporate politics in your Halloween displays because you never know who you may offend in your neighborhood.

Do: Go with shadows.

May not be that scary up close but they’re sure clever, simple, and rather effective.

Don’t: Go for horrific circus displays that may traumatize children.

Now there is such a thing as being too scary. This horrific display may traumatize little kids and not want to make them see a circus in their lives.

Do: Mock non-political celebrities like Justin Bieber and Hugh Hefner. 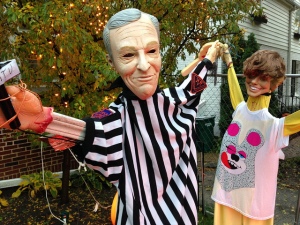 Don’t: Use any Halloween displays that go beyond the PG rating in anything other than gore.

While blood and gore are all right in your Halloween decorations to an extent, doing a pumpkin display with exposed boobs and butts will make many parents complain. I mean you want kid friendliness in this department so don’t do this.

Do: Go with cobwebs, graveyards, and Hollywood style Satanic and cult rituals.

After all, using elements in Halloween displays that have anything to do with death or the occult are perfectly acceptable.

Don’t: Have Halloween displays that depict murder and graphic violence or the neighbors may get upset with you.

I say this especially since the murders of Trayvon Martin and Michael Brown as well as the controversial “shoot first” laws in many states. Also, such violent displays are too graphic for the kiddies.

Do: Decorate your lawn by reenacting your favorite movie in a Halloween style.

Now a skeleton version of Whatever Happened to Baby Jane? now that I approve most admirably. Looks like Blanche has rat for din din tonight.

Now this is just terrible. I mean just who in their right mind would make such a display of someone being being chained by a black person in a hoodie? Seriously, this is just blatantly racist. Don’t ever do this for the love of God.

Do: Use your old dresses to create an illuminated Halloween display the neighbors would never forget.

Now using lights, wires, and dresses to create an illusion that ghosts are wearing your clothes is very creative and impressive. Kudos to the person who thought up this.

Don’t: Go for mutilated corpses that may make the neighbors complain.

A British man was told to remove this decoration, which probably serves just as well. I mean this is too graphic and gross to display in the front lawn anyway.