Meanwhile, Dewey still refuses to open the Vernacularly Fastened Door to the point he’s even suggesting it being a decoy. But he does tell the Baudelaires the three terms such as a medical condition the all share, what killed Count Olaf’s parents, and the unfathomable question in Richard Wright’s best known novel. Olaf is pissed that he doesn’t know two of the answers while the Baudelaires are confused since they know as many as he does. Maybe it’s Dewey’s way of encouraging collaboration but you’ll never know. Anyway, after Dewey makes a sharp comeback at him, asks Esme to help him, but she refuses since they’ve fallen out. Jerome then asks something along the lines of, “So are you taking me back?” Again, Esme turns him down, meaning they’ll probably end up getting a divorce if Jerome has the balls to do so. Eventually Olaf realizes that if he wants anything done, he’ll have to do it himself. So he decides to shoot Dewey at the count of ten. But the Baudelaires immediately stand in front of him to prevent any harm being done to him. As Olaf counts, they immediately grab the harpoon gun and persuade that Olaf doesn’t have to be evil. But Mr. Poe shows up which distracts him into handing the gun to the children who accidently set it off by dropping it on the floor. Guess who gets hit and dies? Yep, Dewey. He stumbles backwards out the door into the pond. The Baudelaires rush into help but are too late. Sunny tells him, “We failed you,” but he shakes his head, murmuring “Kit” as he slips into the water. So now Kit Snicket’s unborn baby will start life without a father. This sets off the whole hotel waking up in chaos. Though the children try to explain that Dewey’s death was an accident, it doesn’t help. A mysterious taxi driver does offer them an escape from the hotel, but pompous ass Mr. Poe steers them back. 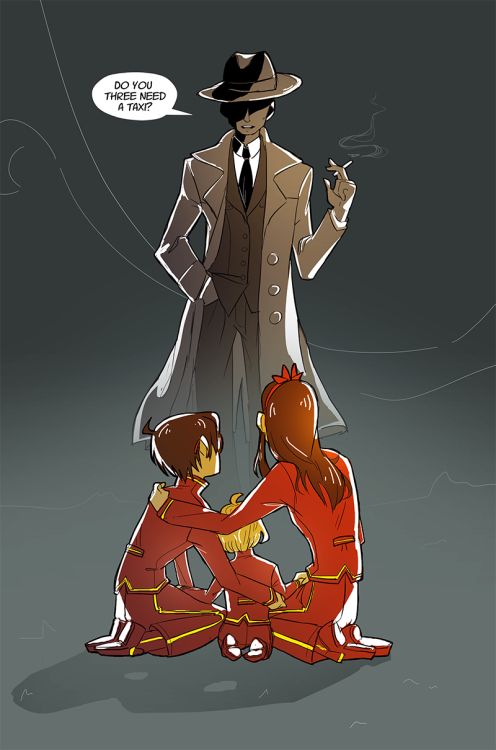 Once again, I turn to Hamilton with “Blow Us All Away” which depicts Philip Hamilton challenging George Eacker to a duel for insulting his famous father. This eventually leads to his death and a massive emotional blow to Alexander and his family. In this version, I have Dewey get killed and the whole Hotel Denouement erupting in chaos over it.

“Blow Us All Away” (ASOUE Version)

Dewey:
Vernacular Fastened Door’s just a mere decoy
Though FYI Baudelaires, I’ll give you the terms to deploy
Only takes three phrases, I’m confident you’ll figure them out
First phrase is about the kind of medical all you three got
Second’s is what brought down Olaf’s parents
The third’s a question Richard Wright asks in
His best-known novel, hope you get that?
Now you hear me say
That someday
You would–

Troupe:
Blow us all away

Count Olaf:
Dewey, I don’t know two of those answers

Dewey:
Well, if you had less greed, and sat down to read, sir

Count Olaf:
What do you mean, Dewey, I’ve got better things I’m doing than that

Dewey:
And that’s why, children, people end up going bad

Count Olaf:
Can somebody shoot a harpoon to knock him off
C’mon, show em’ your chops, Esme

Esme:
We broke it off, Count Olaf
Get out and buzz off

Jerome:
Good for you, Esme, you flicked him off
How ‘bout we both get back, and we’ll strip down to our socks?

Troupe:
Blow us all away!

Dewey:
What is it you really want to know?

Count Olaf:
Well, if I have to get anything done
I must do it myself though
Now just answer the two questions
Or else I’ll shoot you dead, and after a count of ten

Violet:
You’ll have to go through us

Klaus:
While we grab your harpoon gun

Count Olaf:
Well, this is fucking messed up
But I’ve been bad for so long what else can be done?

Klaus:
You can drop the gun now

Mr. Poe:
Oh, what’s going on down here, at this late-night hour
Came here about a recent bank heist, kids, why how?

Count Olaf:
Not mine

Violet:
Jesus Christ, can’t handle it, drop it to the ground!

Mr. Poe:
What the hell did you Baudelaires just do now?

Violet:
Sorry, Dewey, it was an accident, didn’t mean you’d get shot

Dewey:
You didn’t fail me. Oh, my Kit

Klaus:
Jesus Christ, what are we gonna do?

Guest #1:
Did someone get shot from a gun with a big harpoon?

Guest #2:
Just like the paper said, it’s those evil Baudelaires!

Violet:
There’s been an accident in the whole affair

Klaus:
We dropped the gun which discharged. Dewey’s a goner

Guest #3:
We must observe everything if we’re all men of honor

Guest #5:
Call the police since we want to stay safe around here

Guest #6:
We should call the manager.

Violet:
Well, are we killers?
They think so.

Klaus:
We’re really nervous, do we stay or go?
And if we ran, where do we go from here
A place there’s no Olaf or V.F.D. but where?

Taxi:
Children, best get into my taxi
Let’s go

Violet:
We got no dough

Taxi Driver:
Though it seems to me
Are you the three nice children, you all seem?

Mr. Poe:
Okay, Baudelaires, what went on here
You’ve got no cause criminal behavior
Go back to the hotel, Baudelaire killers, you’ll be tried—