Of course, we’re all familiar with this Christmas figure from the Tchaikovsky ballet called The Nutcracker which kind goes in the same league with The Wizard of Oz  or Charlie and the Chocolate Factory.  Ditto, the music called The Nutcracker Suite. Still, they were said to be given as keepsakes to bring good luck to your family representing power and strength guarding it from evil spirits and danger. That is, according to German folklore. Anyway, while many may view nutcrackers as a festive Christmas decoration while others see them as creepy and demented. Still, though I can show you some of the many designs, I’ll just show you some of the strangest, freakiest, creepiest, and most demented nutcrackers around. So without further adieu, here is the list of freaky nutcrackers.

1. Remember the Wicked Witch of the West’s guards from The Wizard of Oz? Well, there’s a nutcracker of one of them.

And just as scary as the real thing in the movie.

2. Here’s a Peter Pan nutcracker with his doll fairy Tinkerbell.

Peter Pan is always creepy for me regardless of depiction (maybe not the Broadway one though).

3. And for your sweetheart in February, here’s a Valentine’s Day nutcracker.

This one makes me puke. If any guy gave me this, I’d say, “Hell, no!” One ugly nutcracker.

4. If you want to add an Asian flair, here’s a Sumo wrestler nutcracker. 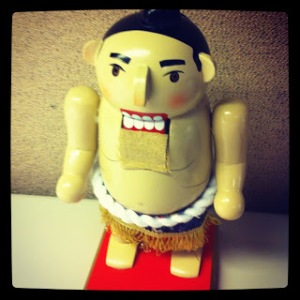 This is actually pretty tacky, but might be offensive to the Japanese who are into sumo wrestling.

5. A hippie nutcracker will certainly bring you back to the 1960s.

And you better buy pot from him or he’ll start to play his trippy music. Then again, maybe the music’s not that bad.

6. Get a Boy Scout nutcracker to show your patriotism and support to these fine young men.

Gives me the creeps just looking at it. I wonder what the Boy Scouts think of these figures. Then again, they’re a more homophobic organization than the military so they probably deserve the creepy Boy Scout figures.

7. If you liked the fairytale, here is a frog prince nutcracker.

And here he is sitting on top of the head of the evil king.

8. Nutcracker Santa goes down a chimney.

And into your kids’ nightmares.

9. And here’s a nutcracker as Satan.

Doesn’t really look like he’d scare he hell out of you doesn’t he? Also, not very tempting.

10. Of course, you’ll always have to get a nutcracker set of KISS. 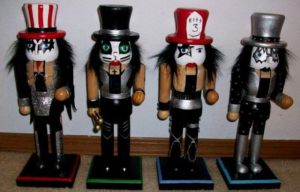 Or just variations of Svengoolie from MEtv who kind of looks like a fifth member minus the white makeup. Then again, I’m not sure if anyone knows who Svengoolie is.

11. Speaking of rock n’ roll, for those with a heart of burning love, here’s a nutcracker of Elvis. 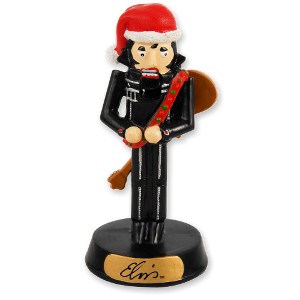 12. Didn’t know they had a nutcracker of Ivan the Terrible.

Or Vlad the Impaler, I don’t know which. Still, is this supposed to be Russian Santa because I don’t think he’s very jolly.

13. For your Christian friends, you can give them a nutcracker nativity scene.

Joseph doesn’t look too happy here. In fact, he seems pretty pissed off.

14. And here’s a nutcracker from Candyland. 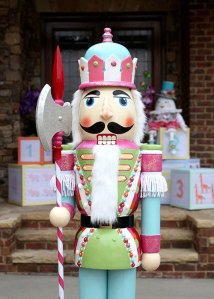 And you better not rip on the way he dresses because he has a battle axe.

15. Also, here are two more Christmasy nutcrackers from the land of the Sugarplum Fairies. 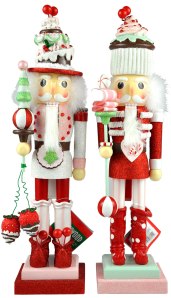 Both of them look pretty creepy to me and a bit overdressed to suit my tastes.

16. What Christmas wouldn’t be complete without a nutcracker of Charles Dickens?

17. And here’s a nutcracker with a bear on its head. 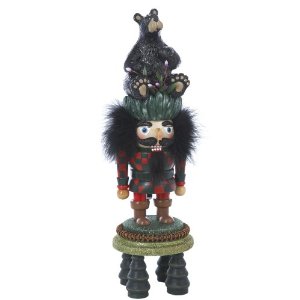 And I think the bear is less scarier than the guy it’s sitting on top of.

Because he’s so pissed off about Twilight, he’s spilling blood everywhere.

Kind of creepy in his little fancy pants and balding head, I dare say. Or does methinks I protesth too much? 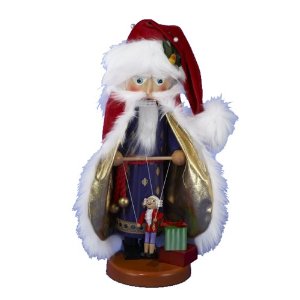 21. Here’s a Dickensian nutcracker of a chimney sweep.

Who also abducts children in his spare time. Seriously, in the early Victorian days, it was young boys who actually cleaned chimneys naked. This guy only supervised the lot.

22. Fly away with aviator nutcracker.

23. For all you ink enthusiast, here’s a tattooed nutcracker.

Intimidating, isn’t it? Not really.

24. Uncle Sam wants you to get this nutcracker. 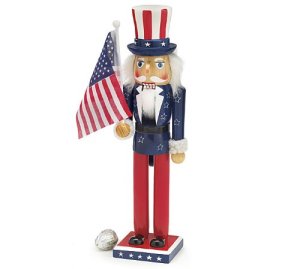 25. For your Irish friends, here’s a nutcracker of a leprechaun.

And don’t you dare try to steal away his pot of gold from under him.

26. Black Forest nutcracker will get his presents this year.

Or else he’ll kidnap your children. Or is it the Dutch Santa, I can’t be sure of which now.

27. And of course, you have to have a Tchaikovsky nutcracker.

Sure he wrote The Nutcracker Suite but looks very threatening nevertheless, especially with the Mouse King in one hand and candle in the other.

28. How about a nutcracker dressed as a Christmas tree?

Looks like a nutcracker in drag than anything to me, especially with the beard.

29. Say hello to the jester nutcracker.

That will give you nightmares as you try to sleep.

30. And here are three glittered nutcrackers from the Candy Cane Forest.

Heard they got in some trouble with the Lollypop Guild. Oh, yeah, they harassed them while they were on strike.

31. And here’s a redneck nutcracker for those blue collar types.

And is willing to use a gun to shoot Bambi like a real one would.

32. Here’s a lawyer nutcracker that is well dressed with a top hat.

Or is he just trying to scare you as a mysterious figure in the snow.

33. Like nutcrackers, Pinocchio is made out of wood so shouldn’t he be a nutcracker, too?

And like many incarnations of Pinocchio (save Disney), it is utterly terrifying.

34. And who can’t be patriotic for having a nutcracker of America’s heroes?

At least he’s dressed like a real soldier but I don’t know about the camo.

35. When there’s something strange in the neighborhood, you have to call a Ghostbuster nutcracker. 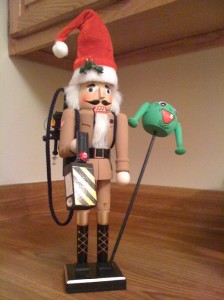 Because the ghosts are more afraid of him as you’ll ever be of them.

36. And here’s some garden gnome nutcrackers.

37. Get into a boat with a nutcracker fisherman.

Wouldn’t want to mess with his angling technique, would you?

38. Go down the slope with a skier nutcracker. 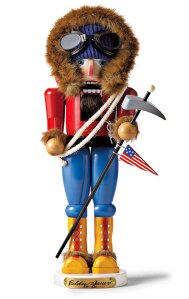 But don’t be surprise if he drives you to your death.

39. And here’s the nutcracker fairy ballerina.

But I don’t think I’d want to piss her off if you know what I mean. Still, perhaps Cinderella could do worse than having her as a fairy godmother.

But at least he’s not playing the bag pipes. Still, looks pretty pissed.

41. And here’s an Eskimo Santa nutcracker with a seal. 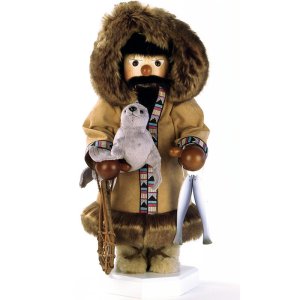 Actually it should be Inuit Santa. Eskimo is an Algonquin word meaning “eater of raw flesh.” Then again, many of the Northern tribes do and so would this one. Still, be glad he doesn’t come with a harpoon gun.

As far as freakiness goes, she kind of gives Cruella de Vil a run for her money, especially with the hair.

43. Be sure to rely on your friendly neighborhood police nutcracker.

Or else he’ll cuff you.

44. And here’s a lovely nutcracker of the Ghost of Christmas Past.

Could also pass as the White Witch of Narnia nutcracker if you’re a fan of C. S. Lewis.

45. What would Christmas be without a nutcracker of Mrs. Claus?

Looks more like a circus clown with pears to me.

46. You certainly don’t want to mess with the nutcracker queen.

And don’t you dare try to criticize her outrageous outfit.

Could also be referred to as Attila the Hun nutcracker or Genghis Khan nutcracker.

48. Relive the tale of Robin Hood through these nutcracker figures.

The Robin Hood one is especially frightening.

49. And here is a nutcracker of the Wizard of Oz.

Looks more intimidating than the one from the movie, especially with the turban.

Or else he’ll whack you with a baseball bat.