Now that I have the peep dioramas out of the way, it’s time for old Easter cards. Though you might see plenty of them with beautiful illustrations like this ornate basket with Easter eggs, you’re not going to see any of that on this post. Instead, you’ll see old Easter cards lost to time for one reason or another. Mostly because their imagery seems to defy all explanation. But some of them are kind of inappropriate or just plain weird. While some of them contain traditions that are very unfamiliar to many of us. Let’s just say you won’t see any of these images on a Hallmark greeting card anytime soon. So for your reading pleasure, I give you another assortment of crazy old timey Easter greeting cards. Enjoy.

There’s a tradition in Scandinavia of Easter witches. I know it’s kind of messed up. Still, you’ll be seeing more of these on this post. 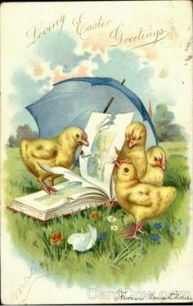 Though a couple chicks would rather do something else. As you can see from their blasé faces.

Yes, that’s another Easter witch on her broomstick. And no, I have no idea why people in Scandinavia thought her as significant.

Since a baby hatched from an egg and the chick seems to marvel at it. Despite it not being how human reproduction works.

5. Once dyed, Easter eggs must be hung to dry.

Okay, I don’t think you should hold up eggs like that. Also, these are chicks holding them. So what kind of eggs do they use?

I don’t see this going too well. Seriously, experimenting with fireworks never goes well. Even among magic users. Just ask the Weasley Twins.

7. Apparently, multiple chickens can fit inside one egg. 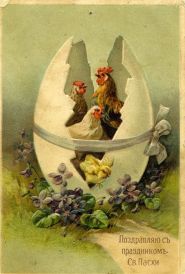 Well, it’s a giant egg cracked open. But it’s held with a giant ribbon. But that doesn’t keep a little chickie from escaping.

8. This bunny doesn’t seem to have a happy Easter.

Since these little kids want to dress it up and make it their pet. Think of it along the lines of “I’ll hug em,’ and squeeze em,’ and keep em’ for ever and ever.” But Harry belonged in the wild open spaces.

9. There’s nothing for a dad rooster like spending a day with his chicks. 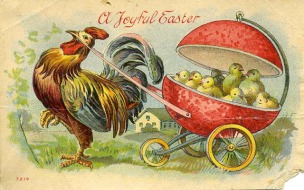 Just keep in mind that they all have different mothers and that most of the boys won’t survive to adulthood. Still, I can’t see how this father would keep track of them.

10. Try fitting those eggs in a suitcase.

Let’s say keeping eggs in a suitcase is a very bad idea. Since they’ll probably break as you carry them. And those chicks will probably suffocate.

11. Bet you’ve never danced with a rabbit before.

The bunny’s like, “Come and frolic with me in the forest. We’ll have lots of fun.” While this boy is like, “Uh, no thanks, my mom wants me to iron my dog.” And he wants to make a run for it.

12. Perhaps you’d like to ride in an eggshell cart.

Of course, not all of them can fit on it. Then there are the flowers dangling from the basket which I don’t think seems safe in any respect.

Or that he could find eggs big enough to put flowers in. Still, don’t use tobacco, kids, it’ll give you lung cancer and kill you. 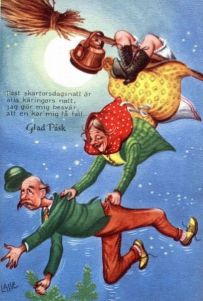 Seems like she abducted this old guy. While she has her legs curled on her broom. And you can see her underwear. 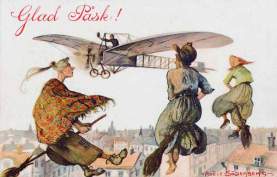 Well, these witches don’t seem too happy about the arrival of aviation. As they look upon that plane with disdain.

17. If you fly too low, you’ll get stuck on someone’s TV antenna.

Apparently, this witch got her broom caught in a TV antenna. And she’s really not happy about it. Hope the guy inside has good reception.

18. Looks like a witch had her broom modified for speed.

This witch’s broom includes a lever, wheel, and a propeller. While the other witches look to her with envy.

19. With a broken broom, she’s not going out tonight. 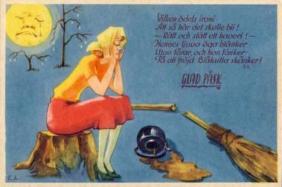 Indeed, a broken broom can really ruin your night. Still, what’s with the kettles? Cause I don’t get it.

20. In the barnyard, it’s the chickens who fly with the eggs.

And the rooster doesn’t seem too happy. But the hens on their flying brooms don’t care a bit.

Too bad since she’s already flown down. Wonder why the old man in bed hasn’t experienced a heart attack with her sudden presence.

22. Should a witch fall into the sea, she’ll have to be fished out. 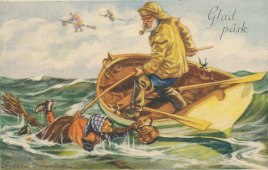 Yes, the fisherman’s rescuing a witch who fell into the sea. Despite the fact she has magical powers.

Yes, apparently in Sweden, witches often like spending their nights with the guy in the moon. Yeah, I don’t know how that’s possible.

She’s like riding the sky like she’s on water skis. While the moon snidely eyes her with an unpleasant smile.

25. Apparently, warlocks can be pervs. 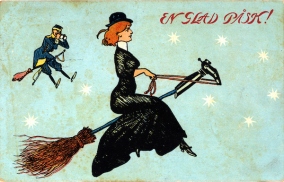 Here the guy on his broom eyes at the witch lady with binoculars. The witch is not happy. Kind of plays out like a scene in Harry Potter.

26. Easter greetings from a distinguished chick.

Seemed like they started smoking so young. Still, the chick seems like he’ll whack you with his riding crook if he could. 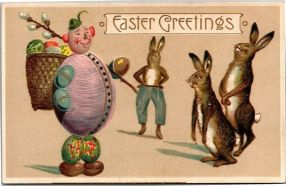 The bunnies are about as stumped as you or me. Guess someone must’ve been on drugs while designing this card.

28. Even bunnies know the meaning of forbidden love.

Meanwhile, the lamb is resenting having to act as a stool for its rabbit friend. Guess some things aren’t as good as they’re cracked up to be.

29. This chick walks a thin tightrope.

I don’t expect this ending well. Even worse that it has to wear a rather humiliating costume in the process. 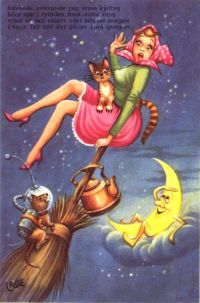 Think this was made during the Space Race, given how the Russians sent dogs in space. Still, the moon seems like he’s enjoying himself. 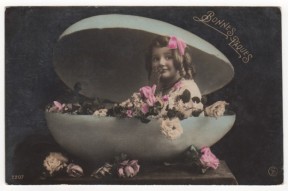 Yeah, I don’t get how they have people in eggs. Much less including flowers as well.

32. Looks like the chickens are out in their Easter Sunday best.

I don’t get putting chickens in clothes like this. But they all seem like a rather well-dressed family.

33. Apparently, the witches are eager to fly like the rest of us.

They may be excited now. But wait until they realize that their cats will need to be in crates and put in the baggage area.

34. Once in awhile, a good looking witch flies through the night sky.

You can see the men looking up at her. Bunch of skeevy perverts.

35. While some witches wear baggy dresses, some wear very few clothes at all. 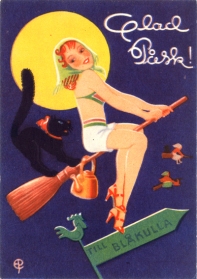 Guess she’s meant for a pinup. Though even characters on Harry Potter wore more while on their brooms than this. Also, Easter usually doesn’t have appropriate weather for swimsuits, especially in Sweden.

36. This chick welcomes you to his humble abode.

This chick wears a fez and smokes a pipe. I know it’s crazy that you’d think this card’s designer was on drugs.

37. This Easter witch makes a smash on TV.

Yes, she crashed through the TV. While the bald guys are wondering what the hell just happened.

38. Always test the ladder before you climb it.

Looks like the ladder couldn’t support the Easter Bunny’s weight. Then again, he might’ve just entered the chicken coop to steal some eggs. 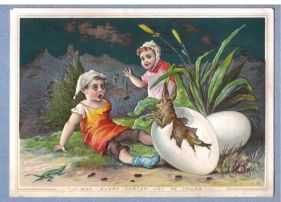 Bunnies don’t hatch from eggs. Nonetheless, I can’t blame the boy from being understandably freaked out by the whole thing. 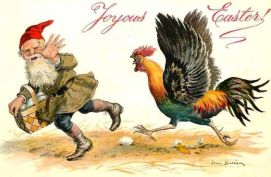 He better be fast cause that rooster looks like he could peck the guy to death. Wouldn’t want that.

41. Perhaps a chick would want a ride on a carousel.

The eggshells are swings. While one chick waits in line. Still, it’s kind of weird if you look at it.

42. Witches, feel free to take a rest stop in the clouds. 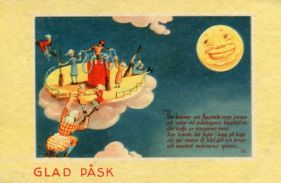 Well, witches can use a break, too. Still, what the hell’s with that attendant?

43. Easter greetings from the flower ladies.

Yet, these flowers have women’s faces. Wonder if anyone who designed this was on drugs. Probably. Seriously, why? 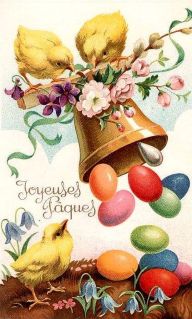 This is a tradition in France, by the way. Yeah, it makes no sense to me either.

45. On a cold Easter, the Easter Bunny transports Easter eggs in the snow. 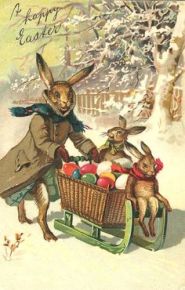 Normally we don’t associate snow with Easter since it’s a spring holiday. But snow in April isn’t unheard of. Guess this is from Canada.

47. This Easter, bunnies will take to the skies. 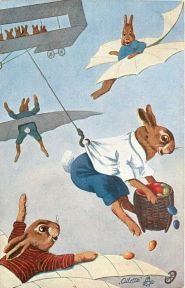 Yes, bunnies take to the skies. I know it’s really crazy. One even drops eggs from his basket.

You’d almost think these women are at a coven. Nonetheless, their faces look so sinister for 2 old ladies.

Indeed, this is really crazy. Even the cat is sort of shaped like an egg. Seriously, why?

Yet, despite being in a tub, that one chick still wears shorts. Not sure why that is (aside from censorship but even that’s ridiculous).