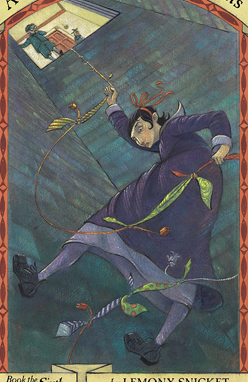 That evening, the Baudelaires get to plan. Klaus mentions that there are two sets of elevator doors at the penthouse floor while every other floor has one. Thus, one of them must be fake which would explain why Count Olaf was able to sneak away without the doorman or anyone else seeing him (save Esme). But how to tell them apart? Well, Sunny figures that the button panels would have up and down buttons on them. So since you can’t go higher than the penthouse, they press the up button. Inside they find a bare shaft that’s nothing but blackness as the elevator is ersatz. So how to go down? Well, they decided to make a rope of extension cords, neckties, and curtains. Because they have to find Count Olaf to rescue the Quagmires. 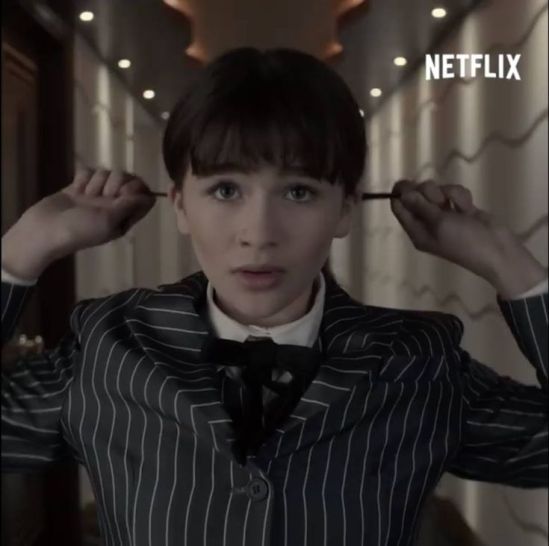 The song I chose for this is Jefferson Airplane’s “White Rabbit” which is a trippy tune by lead singer Grace Slick about Lewis Carroll’s Alice in Wonderland. She stated the original version was a slap to parents who read children such stuff but wonder why they end up using drugs later on. Also, she claimed to write this song after an acid trip. For her, the white rabbit symbolizes a pursuit of curiosity since drugs were about mind expansion and social experimentation. Not to mention, she often read Alice in Wonderland as a child. And it was one of the first songs whose drug references went past the censors on the radio, according to Wikipedia. But I highly doubt this since there are a lot of earlier songs replete with drug references as well. In this version, I have the Baudelaires going looking into the ersatz elevator shaft for the first time and going down.

Klaus:
One set has an elevator
And one set just has a shaft
If we want to know Olaf’s hideout
The second one’s is that
Sneak past Squalors
To tell doors apart

Violet:
How to tell which is genuine
And which is just a set of doors
Look at the buttons as Sunny told us
Don’t need “up” on top floor
Let’s press it
Since these are just plain doors

Klaus:
As the elevator doors start to open
Nothing but darkness from inside
No ropes, this elevator is an ersatz
As the long dark shaft terrifies
It’s just blackness
From a deep well’s side

Violet:
But we must all go down there
To find out Olaf’s plan
Forget about asking Jerome and Esme
Get some cords, drapes, and ties for a rope
While I tie them with the devil’s tongue
Down the shaft
Down the shaft