Reaching the penthouse, the Baudelaires meet their fabulously wealthy new guardians, Jerome and Esme Squalor. Jerome is a rather decent man, but he doesn’t have what we call balls. Since he’s a walking doormat because he thinks any confrontation is a waste of time despite being rich and successful enough to afford a penthouse. Since according to Lemony Snicket’s Unauthorized Autobiography, he bought the place at Jacques Snicket’s suggestion. Then there’s his wife, Esme, who’s a fashion-obsessed maven as well as the city’s 6th most important financial advisor. Very materialistic and vain, she treats her life like a fashion show, wearing stuff and doing things that are “in” with no regard to practicality. She even said she took the Baudelaires in her home because orphans were “in” while her husband just wanted to take care of them as soon as he heard of their troubles but Esme refused since they were “out” at the time. Nonetheless, she’s very selfish and inconsiderate toward everyone. 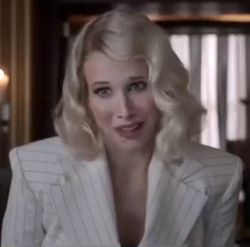 The song I chose for her introduction is Cole Porter’s “Begin the Beguine,” which he composed during a cruise trip in the Pacific. Now a beguine could mean 3 things. Its original meaning was a Christian lay woman living in the 13th and 14th century who lived in a religious community without taking formal vows. In the Caribbean creole, it meant “white woman.” The word was then applied to a slow couple’s dance that’s a combination of French ballroom and Latin folk which became popular in the 1940s thanks to the Cole Porter song. The original lyrics are just a plain romantic ballad. This version just illustrates how fashion obsessed and self-absorbed Esme is.

When you need to be in
You’ll always be with all the latest fashions
Wear these pinstripes, you’ll look smashing
You’ll be all the rage on the scene.

How about you try these water martinis,
They’re non-alcoholic to retain PG ratings
But that’s what you drink while rich and famous
When you need to be in.

Though I am rich, just call me Esme,
Since orphans are in, I’m happy you’re here
For you’ll make my friends sick with envy
So if they see you, they might just leer

Please bring out the dark, and bring in the light,
Being in fashion’s work so I’ll learn your names later,
So rest from climbing the stairs since we can’t use the elevator,
Since elevators are now on the outs.

So I’ll make sure we all can stay in
Wear pinstripe suits for a night at Café Salmonella
Enjoy this ocean décor which I bought on special
When you need to be in.

Oh, yes, it’s always great to be in, know the trends
As the city’s sixth most important financial advisor
Make yourself at our penthouse home
You will be fine here
So pick out your rooms you’ll want to sleep in,
When you need to be in.