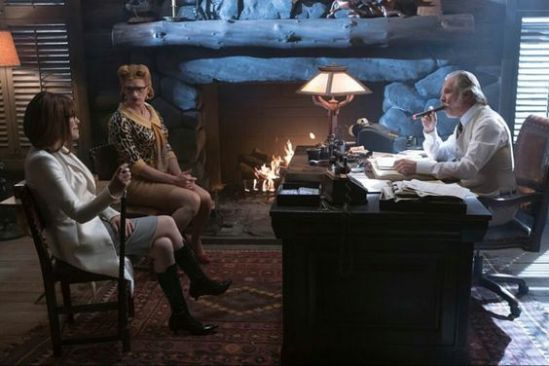 Seeing that her brother’s been hypnotized by the sinister Dr. Orwell, Violet decides to put Klaus in the dormitory and see Sir for help. Mostly because he’s the Baudelaires’ current guardian and she doesn’t have anyone else to go to. However, Sir has issued the kids a memo about the accident, which he blames them for and thinks it’s a sign that they’re “bad workers” and that these aren’t tolerated at the lumbermill. Also, he threatens to send the kids away to a receptionist in town who’s named Shirley. Nonetheless, you have to wonder about Sir here. Because he runs a lumber mill, a dangerous place where accidents usually happen like all the time, especially if the workers aren’t wearing protective gear like safety goggles for instance. Secondly, he sees absolutely no problem with putting children to work in such a dangerous place where they shouldn’t be or operating heavy machinery kids shouldn’t get their hands on. All of a sudden, Sir is concerned about the Baudelaires causing a workplace accident? It should be plain to see that Sir’s just using the accident to get the children off his back. But Violet decides to see Sir anyway because she’s worried about what instructions Klaus might receive while under hypnotic influence and that Shirley is Count Olaf. But Sir doesn’t believe any of that. Charles also proves quite useless as well since Sir is a complete asshole.

The song I picked for this meeting was Steely Dan’s “Pretzel Logic.” The original version is a bluesy song about time travel with references to Napoleon and minstrel shows, according to Donald Fagen. But one writer thinks it’s about Steely Dan’s quest for stardom and that whatever they’ve done in the past doesn’t matter anymore since it’s gone. The first verse is said to reflect their distaste for touring, particularly in the American South. In this version, I have Violet pleading to Sir and Charles who don’t amount to anything.

Violet:
Well, I came into your office
Because I don’t know where to go
Cause you’re supposed to be our guardian
And my brother’s hypnotized

Orwell’s got him in a trance, got Phil’s leg smashed
Sounds like a broken record on a phonograph
You might send us to Shirley
Who’s really Count Olaf, oh yeah

Sir:
You really suck as workers
And you caused the accident
If you ever cause another
Then I’m gonna have you sacked

Besides, there’s just no way Shirley’s a man
She’s only got one eyebrow, but plenty have
She’s not at all Count Olaf
Now get out of my face, oh yeah

She has her name right on a plate
No, I didn’t even see her legs
Because I’m being a gentleman
No, you can’t all Mr. Poe
Now why can’t you girls just go

Charles:
Well, please don’t mind my partner, he’s not that bad
I can’t solve all your problems, but here’s some snacks
You should be seen as family
But, what can you do, oh yeah