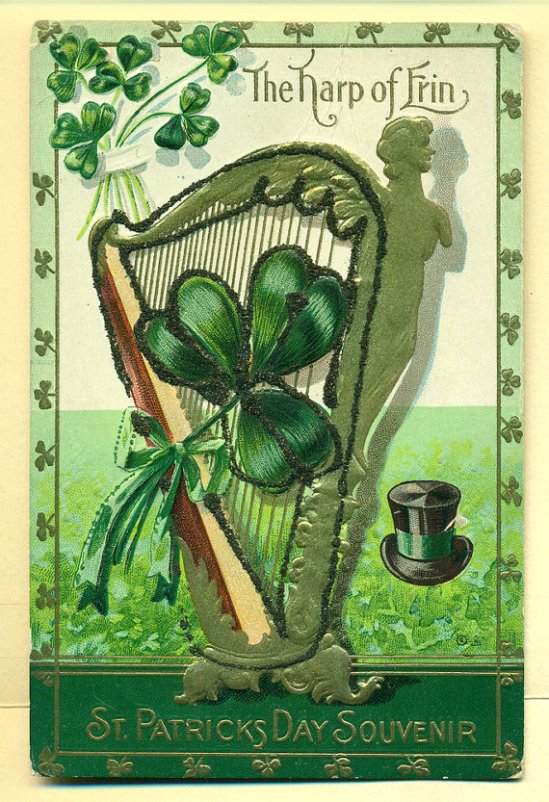 As you probably know by now, people have always been sending greeting cards to each other during certain holidays. And Saint Patrick’s Day was no exception to that, especially in the days before the Internet. We should also note that in the olden days, the 19th century was a very terrible time in Ireland that a series of unfortunate events, most notably the Irish Potato Famine of the 1840s prompted a mass diaspora from there to other parts of the world such as the United States. But they also found new homes in other places like the United Kingdom, Australia, New Zealand, and even Latin America. And it’s because so many Irish immigrants came to these parts of the world that Saint Patrick’s Day is such a widely celebrated holiday. This is particularly the case in the 19th century when so many Irish Americans were either immigrants or related to one where we first see many of these celebrations get started like the Saint Patrick’s Day parades in places like Boston, New York, and Pittsburgh. So it’s not unusual to see Saint Patrick’s Day greeting cards around either. And though I could go all I want about these lovely works of Hallmark art, I understand you’d probably be bored to tears. So instead, I’ll stick to the ones that might make people scratch their heads. We should also note that the 19th century was a time when offensive Irish stereotypes proliferated which have now manifested in modern depictions on leprechauns to much Irish disdain. So for your reading pleasure, I give you an assortment of Saint Patrick’s Day cards from the days of old.

For some reason this kid has the disposition of a future serial killer. There is now soul within those Irish eyes.

Another soulless Irish lad. Seems like he’s using his superficial innocence to play you for a fool before stabbing you in the back. Don’t be taken in.

3. Even Santa Claus has a bit of Irish in him.

How can Saint Nick be Irish, I have no idea. But I don’t think dressing up as a leprechaun will endear him to the good Irish boys and girls.

4. A Saint Patrick’s Day greeting and wait a minute, that doesn’t look like an Irish flag. 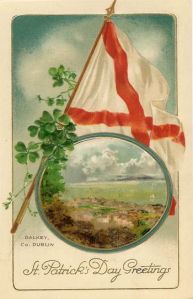 Okay, I had to look this flag up on Google. According to a historical flag site, it’s the Saint Patrick’s Cross flag which was allegedly used by the Irish National Corporate Party of the 1930s known as the “Greenshirts.” And it was an openly fascist organization. So though it’s seen as a traditional Irish flag before then, it hasn’t been used in Ireland since.

5. May luck bestow blessings upon you the way leprechauns shower shamrocks from blimps. 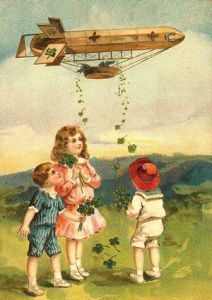 Yes, I know it looks ridiculous. But blimps have appeared on a variety of greeting cards during this period. Not sure why.

6. Nothing brings in the spirit of Saint Patrick’s Day like an Irish lass riding a white pipe. 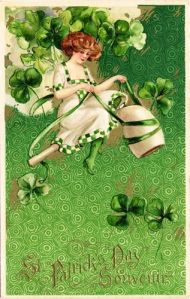 And she’s riding it like a horse as if she’s in someone’s drug induced pipe dream. I’m sure someone was high off some opium binge to come up with this idea.

7. Happy Saint Patrick’s Day from high up in the shamrock plane.

Not sure if you can really fly that thing or whether it’s safe to stand up in it. In any case, if these two survive a crash, consider them lucky.

Hate to say this, but Irish Mr. Potato Head looks so damn creepy. Like he’s out to get you during a hangover kind of way. 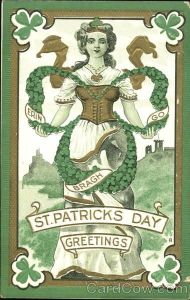 Sorry, but pale green skin makes her seem like a bride of Dracula than an Irish angel. I’m sure she’ll haunt many Irish dreams.

10. On Saint Patrick’s Day, it’s customary to get all shamrocked out.

She even has a shamrock dress on. And a yellow hat with shamrocks on it. I’m sure Lady Gaga would wear the same thing.

11. An Irishman always likes to see his lass in a shamrock dress.

The fact a lot of women’s dresses were shaped like that at the time was coincidental. Though this is kind of ridiculous.

12. These Irish kids would like to bestow a Saint Patrick’s Day greeting.

I’m sure little Patty is giving little Molly some clover because she wants to see her tits and look up her skirt. And Molly knows it.

13. Irish couples always know when to get it on during Saint Patrick’s Day.

However, whether the guy practiced consent is another matter. But she doesn’t seem to mind because he’s hot.

14. May Saint Patrick’s Day make you a lucky frog on March 17th.

I have no idea what the frog has to do with Saint Patrick’s Day. Is it because it’s green. Other than that, not much else.

15. Erin Go Bragh for this pair of newlyweds. 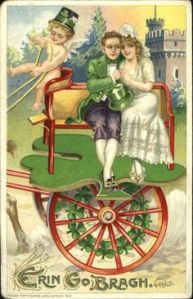 Who seem to resemble a couple you’d find in a creepy illustration of some Gothic novel. Though they do seem terrifyingly happy together.

16. This garden gnome wishes you a lucky Saint Patrick’s Day.

You better because this gnome might want to kill your cat sometime. His eyes only show pure evil. 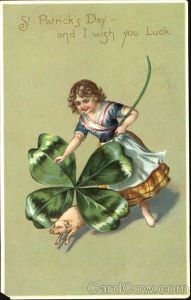 Now I understand the oversized shamrock. But the small pig? Not so much. 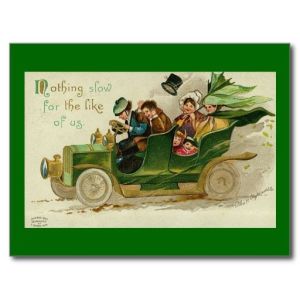 So this card implies that the Irish are bad drivers? Seems to be the case.

20. Saint Patrick’s Day Greetings from the woman with the giant pipe. 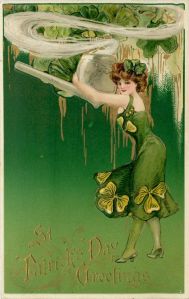 And that pipe is making a smoky haze. But I don’t think she’s bringing luck but lung cancer. Seriously, what’s with the large pipe?

21. “Tis the shamrocks on St. Patrick’s Day/ That bring back memories dear and gay.”

Though the kid’s expression on his face reads something more sinister. And no, I don’t think he’s musing about Ireland either.

22. Some tourists in Ireland would go to great lengths to kiss the Blarney Stone.

But using a rope harness is kind of ridiculous. Seriously, please don’t try this. Ever.

However, this doesn’t change the fact the Irish here are depicted in a very disparaging way. And that there’s booze depicted along the border.

24. Saint Patrick’s Day is always a time to celebrate.

Now this couple looks rather cartoonish in caricature. Guess card designers of the time couldn’t resist putting in Irish stereotypes after all.

25. “May the corners of yer mouth never turn down.”

Apparently. people in the 19th century thought old Irish ladies resembled witches who’d own candy houses to lure kids they’d cook for dinner. Seriously, this is in very poor taste if you ask me.

Hmm…a jolly Irish guy dressed like a leprechaun with a glass of booze. Not something I’ve seen before (sarcasm).

Is that guy dancing with a club in his hand? If so, is it to clobber any guy who wants to dance with his girlfriend? I need answers.

In other words, “plastered drunk.” Yes, the Irish drunk is on a Saint Patrick’s Day card. I believe this card was sent to the Irish in people’s lives they hated. 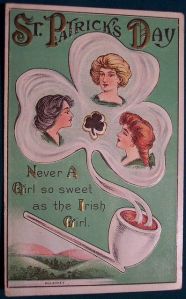 And in Ireland, you’ll find Irish girls come in 3 different varieties such as blond, brunette, and redhead. As this pipe shamrock smokescreen can show.

30. Saint Patrick’s Day is always a time of Irish love. 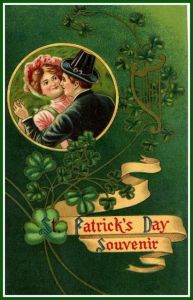 Though I’m not sure whether they’re supposed to be dancing or making out. Can go either way.

31. Even Cupid would like to get in the Saint Patrick’s Day celebrations.

For the love of God, Cupid, Valentine’s Day is over. Seriously, what the hell are you doing on a card for St. Patrick’s Day. It’s not your holiday.

Yet, this guy happily wields his club when he’s walking his pig. No, I don’t think Irishmen are like this.

33. Irish couples always seem to enjoy a bit of blarney. 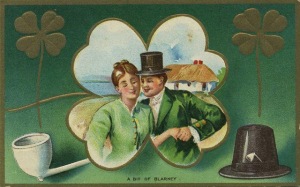 However, the guy in this card seems to remind me of a creepy old man for some reason. Not sure why.

34. On Saint Patrick’s Day, Uncle Sam loves to make out with his Irish lass.

Yes, I know this is at a purely symbolic angle. However, Uncle Sam is supposed to look like a skinny old guy. So you get the creepy vibes.

35. Shamrock head would like to wish you a Saint Patrick’s Day greetings.

But instead of bringing you luck, it’ll bring you nightmares. Seriously, why?

36. Speaking of Uncle Sam, here he enjoys an Irish toast.

I know this is supposed to be a gesture of Irish and American friendship. But the Irish guy is represented by an oversized leprechaun.

37. There’s nothing on Saint Patrick’s Day like a peaceful rowboat ride.

Yet, we find this Irishman in a boat with 2 women which is about to capsize. Wonder what it says about him.

38. Best wishes on Saint Patrick’s Day from the clover kids. 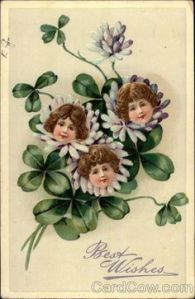 So I bet this card was made possible by acid trips. Not sure how else I can explain it.

39. “I’m thinking of Old Erin tonight/Of the dear little cot by the sea/for the shamrock on St. Patrick’s Day/Still bringing back memories to me.”

However, I’m sure the woman is like, “Sorry, but I’m not interested so get your stupid hand off me.” Yeah, I don’t think she’s happy.

40. Here’s looking at you on Saint Patrick’s Day.

Because nothing says Saint Patrick’s Day like a pair of eyes staring at you through a shamrock. Now that’s very unsettling.

41. “Here’s to the toast in th’ rosy cup/To Swatehearts far across the sea/Wid wine ave hope/We fill it up/An’ drink to days that yet may be.”

Another depiction of an Irishman drinking. I know it’s an offensive stereotype that never seems to die.

42. How about a toast to Ireland on Saint Patrick’s Day? 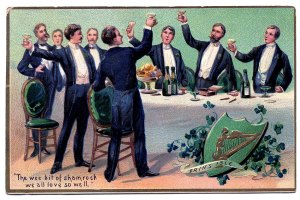 Yes, it looks like a toast. But we all know what’ll happen afterwards.

43. “Let our hearts be young at the dawning/of Saint Patrick’s Day in the morning.” 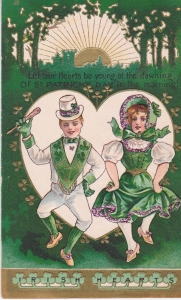 The guy in this card isn’t drawn very well. Yes, he’s supposed to look happy. But his expression is more terrifying. And holding the club doesn’t help.

44. Nothing makes one feel lucky on Saint Patrick’s Day like pilfering a pig.

For some reason, pigs were seen as symbols of luck back in the day. Not sure why.

Don’t look now but I think the man might have eyes on the girl with ill intent. The girl should run away while she still can.

46. Saint Patrick’s Day is always marked by the wearing of the green.

And in here even the bird of prey is green. Nevertheless, the woman has a rather oversized head for some reason.

For the love of God, this kid looks like a pure monster in a little suit. Avoid him like the plague.

48. On Saint Patrick’s Day, the whole world looks upon Ireland.

Don’t tell me that’s a crazed Santa Claus dressed in leprechaun garb. Might need to calm down a bit.

49. There’s room for everyone on the Shamrock blimp.

Though why anyone would disregard any notion of safety is a good question. Hope they’re lucky to have parachutes.

50. You never know what you’d find on Saint Patrick’s Day.

I’m sure that guy is interested in watching the girl beside him peeling potatoes. Then again, he probably has his eyes stuck somewhere else.