Just as Esme reaches the bottom, Violet grabs a mask, steps forward, and warns her that she’s about to walk into a trap. When Esme asks who she is, she tells the woman that she’s a volunteer. This comes a bit of surprise to Esme thinking that there were no other volunteers at V.F.D. headquarter ruins. But Klaus grabs a mask to point out that V.F.D. doesn’t need headquarters to survive because another generation will always step in for the battle against evil. Though Esme steps forward to threaten the kids, Quigley dons his mask, telling her that if she steps in, she’ll fall into a trap. And if she does, they can’t feel bad because they did everything they could to warn her. But Esme doesn’t fall, she does uncover the trap and congratulates them on doing a good villainous job. The children then break to explain they planned to train her for Sunny, prompting a moral debate over the “greater good” and a slew of insults. 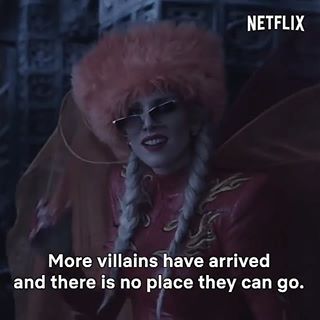 Once again, I turn to Steely Dan with “Fire in the Hole,” taking its title American soldiers used during the Vietnam War and alludes to how many students evaded the draft during that time (Walter Becker and Donald Fagen included). In this version, the elder Baudelaires and Quigley warn Esme not to fall in the trap they set for her.

“Fall Into a Hole”

Sung by Violet and Klaus Baudelaire and Quigley Quagmire

Violet:
Hold on here
I’m a volunteer
You might find that surprising
Please stand back
It’s a trap
Unless you want to be inside
A woman’s voice reminds me
To serve and not to speak
So I kindly ask you to retreat

Klaus:
Base is burned
But we have learned
That we don’t need a headquarters
Net gen nigh
To stand and fight
Against the evils that you concur

Quigley:
Don’t approach any closer
And heed me as I warn
Don’t say we didn’t caution you before