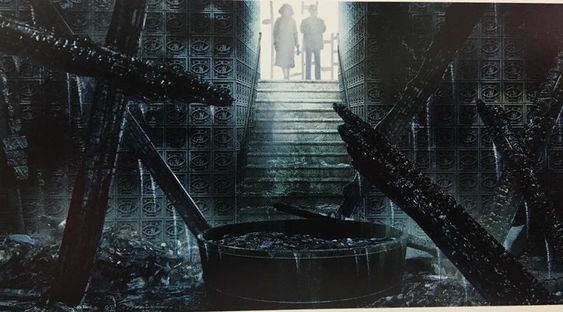 The elder Baudelaires and the sweatered scout find themselves among V.F.D.’s headquarters’ ruins. The only thing remaining unscathed was the refrigerator. But the waterfall next to the kitchen solves the mystery why the water was a greyish black. Nonetheless, Violet and Klaus are dismayed because they hoped to find their surviving parent as well as the answers to the questions they’ve had on their minds. They even call out for their parents to see if anyone was in there or whether they showed up. After all, they were supposed to be there. Violet asked whether anyone would be at headquarters during the fire, but the sweater scout says there’s no way of knowing for sure. After their guide tells them they’re all alone, Klaus then rants about page 13 of the Snicket File and the fact there was supposed to be a survivor of the fire and the survivor was supposed to be here. Yet, the scout tells the elder Baudelaires that the survivor is here before removing his fencing mask and revealing himself as Quigley Quagmire. 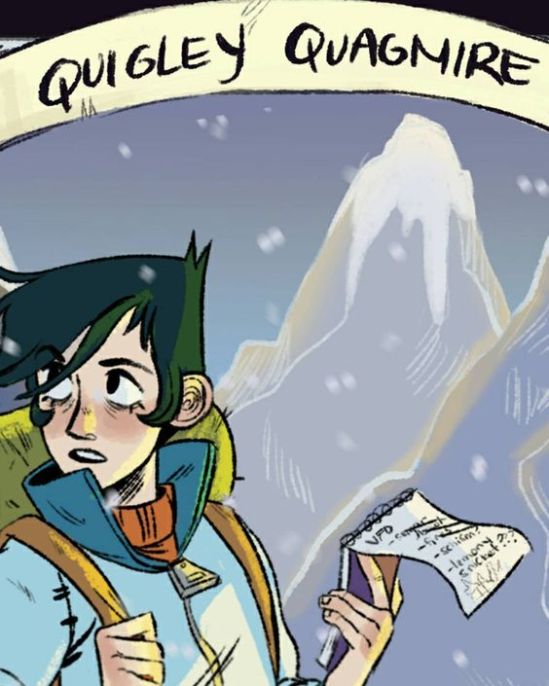 The song I chose is “Who Am I?” from Les Miserables. In the original version, Jean Valjean wrestles with his conscience over Javert’s announcement that the authorities captured an innocent man under his name. But he ultimately decides to go to that innocent man’s trial despite having every reason not to like a factory he owns and the fact he’s the mayor of the town. In this version, I have Violet and Klaus being upset over the burned V.F.D. headquarters and Quigley wrestling to reveal himself. Though to be fair, in the books, I don’t think he had to think too hard about removing his fencing mask.

Sung by Violet and Klaus Baudelaire and Quigley Quagmire

Klaus:
V.F.D. base is in ruins
Before we had a chance
Guess that is the answer
To all that grayish black

Violet:
Where is our Mom or Dad?
I’m sure we can’t be wrong
When we have come so far
And struggled for so long?

Quigley:
I’m afraid we’re alone
Anyone inside, we can’t know

Klaus:
The Snicket File said one of our parents
Survived the house fire
Olivia said that the survivor
Would be right here
Yet, no one replies

Quigley:
Who am I?
Can I condemn these two to secrecy
Pretend I do not feel their agony
They thought they’d see their mom or dad
And now they’re feeling they’ve been had

Who am I? Who am I?
Quigley Quagmire

So Baudelaires, as I recall
There’s a survivor after all!
Who am I?
Quigley Quagmire!