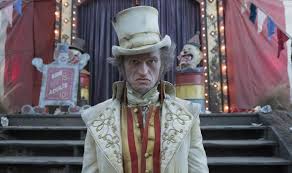 As the Baudelaires go outside to drink their hot chocolate under the pretense of visiting the gift caravan, Count Olaf pulls in. So they don’t have much time to investigate her tent. And he’s towing a trailer filled with starved lions for a new attraction. His plan? Well, as he put it, he wants the lions to replace the tagliatelle whip. In other words, he’s devising that the lions to eat one of the freaks thrown into a pit. After all, freaks live such miserable lives that they won’t care to sacrifice their lives for a lion’s meal. Except while the crowd is in a Hunger Games like frenzy and excited for the upcoming blood and gore, the freaks and the Baudelaires aren’t okay with it for obvious reasons. But unfortunately, the crowd loves the idea so it’s guaranteed to be fantastic hit. Thankfully, the Baudelaires have some time to go into Madame Lulu’s tent before tomorrow.

Of course, I had to use “For the Benefit of Mr. Kite” by the Beatles from their Sergeant Pepper album for this. Since this song is also announcing some death defying circus act involving Mr. Kite jumping through a hoop of real fire. Obviously, having a freak jump through a ring of fire would’ve been an easier and cheaper attraction idea for Count Olaf. Besides, he’s a pyromaniac. But the guy’s so despicable that he doesn’t care who dies for the sake of entertainment. Since the lions are his way of paying Madame Lulu. In this version, Count Olaf announces that a freak will be thrown into a pit of lions. Still, I kept some of the original elements in the Beatles song as an added bonus.

“For the Benefit of Caligari”

The Hendersons will all be there
Late of Pablo Fanques Fair, what a scene!

The freaks will do their stunts as side acts
Before one’s thrown in a pit of real lions!
In this way Caligari will challenge the world!

The anticipated lion scene
Is taking place on Saturday at Bishopsgate

The Hendersons will dance and sing
As one freak’s pushed off the cliff, don’t be late!

Madame L and I assure the public
Our production will be second to none
And of course, Henry the Horse dances the waltz!

Having been some days in preparation
A splendid time is guaranteed for all
And today Madame L is topping the bill!