Disclaimer: This is a post purely for entertainment and no more. Sure I may put on tacky nativity scenes but I do the same when it comes to any Christmas decorations. If you’re a diehard Christian and think any of the nativity displays offend you, please don’t take your offense in the comment section. I’m not trying to offend anyone’s religious affiliation since I’m a Catholic who attends regular mass as well as a political liberal who believes in separation between church and state. Besides, I don’t find humor or tackiness in any way sacrilegious and neither should anyone else.

As a practicing Catholic, I’ve always considered the nativity scene as one of the more important Christmas decorations since it depicts the birth of Christ which is one of the reasons to celebrate the holiday (though not the only one). Sure it carries religious symbolism but Christmas is a religious holiday for many people (and let’s just not have church and state politics get in the way). You have the baby Jesus, his mother Mary and stepfather Joseph (though “official father” on his birth certificate), a shepherd, the the 3 Wise Men, a donkey, some sheep, an angel, and other farm animals in the stable. Of course, the nativity scene isn’t a historical reenactment nor one as depicted in the Bible (since the shepherds appeared in Luke and the 3 Wise Men in Matthew). Yet, while some nativity scenes are works of art as the result of divine inspiration, others not so much. Whereas, some of them may avoid divine inspiration entirely. Nevertheless, even the nativity scenes of divine tackiness deserve some recognition, if not serve as something to amuse us. So without further adieu, here are some of the tackiest nativity scenes for your appreciation.

1. Nothing says “Peace on Earth” than having the Holy Family depicted as shotgun shells.

A homemade project sponsored by the NRA.

2. A nativity scene that will bring you joy as well as clog your arteries. 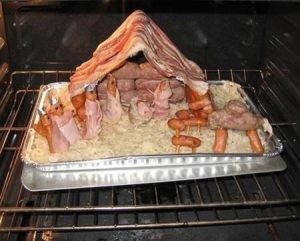 A nativity scene most likely to give you a heart attack and kill you.

3. A great nativity set to go with your Dogs Playing Poker. 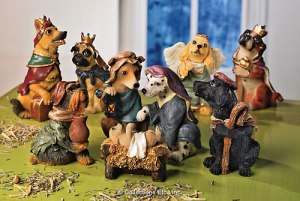 Seriously, the Jesus pup looks a little like Joseph while Mary is a dalmatian. How does that happen when Jesus is supposed to be the Son of God?

4. A nativity scene which has risen from the dead, literally.

So does this mean Christ was born already undead?

5. The nativity scene of the modern art museum. 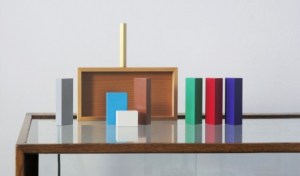 Sure looks like it. But it also could be a bunch of colored blocks.

6. Someone must’ve gotten their Bible stories mixed up to design this.

Seriously, is the old guy supposed to be Joseph or Noah? Also, is that structure a stable or an ark?

7. No better way to put the “Christ” in Christmas than right above your crotch. 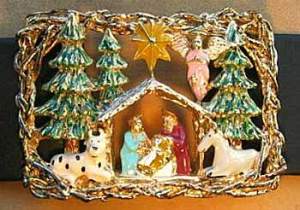 Also, I doubt that tall evergreen trees even existed in Bethlehem during the early Roman Empire.

8. A futuristic minimalist take on the birth of Christ. 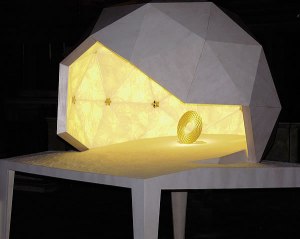 Looks more like a gold disc lighting up EPCOT to me.

9. So whoo is born the king of Israel?

10. Taxidermy: can make a touching scene into one much more terrifying.

So all the critters and the old lady scared all the adults away while the baby Jesus remained.

11. Glory to Gouda in the highest, and cheese to his people on Earth. 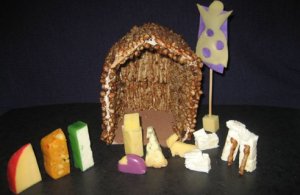 Blessed are the cheese makers for they are the children of God.

12. Hark! the herald angels sing. Glory to the newborn…kitten?

Only a crazy cat person could appreciate this. I find this set purr-fectly creepy if you ask me.

13. Of course, no Irish Christmas can be complete without a visit from St. Patrick and a couple of his drinking buddies.

Giving him three casks of whiskey which they all drank into the night and trashed the place to an Irish jig by the Irish harp playing angels.

14. So as Christ was born in a manger he was given fleece from the shepherds, gold, frankincense, and myrrh from the magi, and a private concert from Metallica. 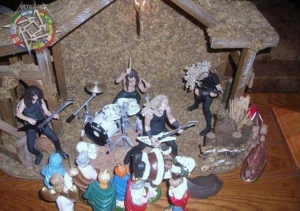 And everyone had their eardrums blasted that they were afflicted with tinnitus the next morning which the baby Jesus cured thus performing his first miracle.

15. So Jesus was born in an igloo in Bethlehem as God’s snowman incarnation on Earth.

Of course, I’m still wondering how Frosty the Snowman fits into this.

16. Jesus was born before the quack of dawn.

Still, I wonder if the Mary and Joseph geese are taxidermy or not for they certainly look hideous.

17. A nativity scene that doubles as a set of bowling pins.

Seriously, I wonder if God is supposed to be the bowling bowl that comes with the set. Oh, well, so we can only play 9 pins with it.

18. So Jesus came to free us from sausage and deliver us from bacon.

Seriously, even the animals are pigs. Doesn’t look kosher at all.

Would be the perfect nativity scene for Nightmare Before Christmas fans and can also be used as a Halloween decoration.

20. The nativity scene for stoners in which baby Jesus will grant you eternal life as a 7/11 burrito.

And I’m not sure what Mary and Joseph remind me of. Wizards’ hats?

Of course, the three wise men brought stolen picnic baskets instead of gold, frankincense, and myrrh.

Seriously, why does the Virgin Mary have antlers? Female moose don’t have them.

23. A nativity cookie cutter set. I wonder what could go wrong with that.

Reminds me of the Curb Your Enthusiasm Christmas episode when Larry David ate the cookie nativity scene, including the cookie Baby Jesus.

24. So Mary and Joseph stayed at a stable in Bethlehem Hawaii, where she gave birth to her firstborn tiki. 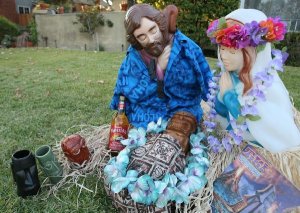 For God’s sake, why does Saint Joseph have a Hawaiian shirt on?

25. Never before has the Nativity of Jesus has been so sweet as on cupcakes. 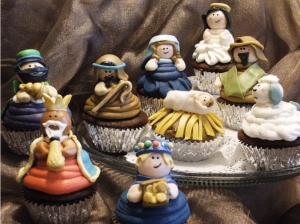 Won’t be able to resist those, no way. And they’re chocolate, too.

26. So the baby Jesus was hatched and lay in the manger on the polar ice.

It’s like a nativity scene meeting March of the Penguins.

27. Let’s just face it, live nativity scenes are really for the dogs.

Admit it, no matter how sacrilegious this is, you’d still see a live dog nativity scene in your neighborhood. I mean who can resist this much cuteness?

28. A nativity scene only fit for a bar. 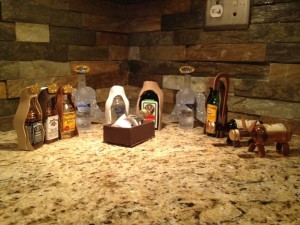 Of course, you got to give some kudos on the creativity.

Joseph is probably worried about having to wake everyone up in the morning after all the clucking the angels have been doing.

The marshmallow figures can also be imagined as snowmen for there are similarities.

31. Even Santa Claus bows to the manger scene in adoration.

For God’s sake, I think Santa is planning to eat the Holy Family as part of his snack. Run, Mary and Joseph, run for your lives and take Jesus with you! Santa’s hungry!

32. Christ was born to absorb all the suffering from sin and redeem the world. So maybe a tampon manger scene is on to something.

Okay, I may be crossing the line there. Still, despite what a tampon is for, this doesn’t look that family unfriendly at all.

33. Rubber Duckie Nativity set: teaching the meaning of Christmas through making bath time so much fun.

Seriously, rubber duckie farm animals? How crazy is that?

34. No wonder the Holy Family couldn’t get any rest.

Donkey must’ve been annoying the crap out of them all night.

35. The Holy Family under the sea. 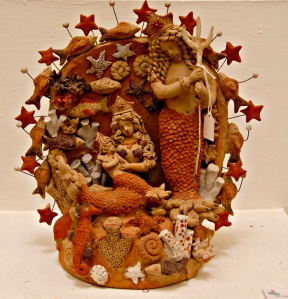 The Holy Family as mermaids, never heard that one before.

36. If Jesus was born in a barn in Bethlehem, Texas, the Bible Belders wouldn’t shut up about it.

Seriously, why do all the wise men look like ranch hands?

37. This chocolate nativity scene is good enough to eat. 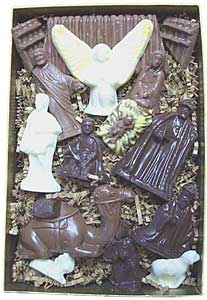 Note to self: Must not eat until January.

38. Santa goes down on one knee to behold the Lord on the living room table.

Seriously, this Santa is giving me the creeps.

39. The baby Jesus is visited by the Wizard Gandalf and his unicorn. 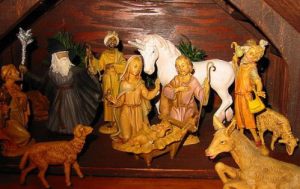 Hey, I was joking. Still, sorry Lord of the Rings fans.

40. Let this Holy Family fiber optic nativity scene bring you back to the disco years. 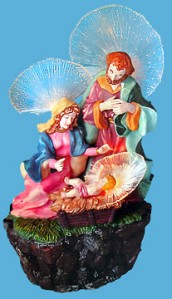 The person behind this must’ve been stoned out of his mind to design this. Probably on brown acid or something.