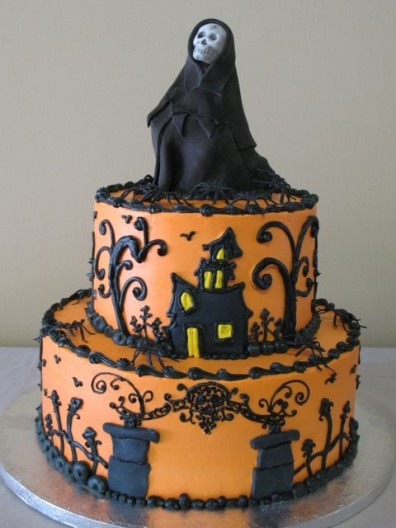 When it comes to finding tacky and inappropriate stuff for Halloween, it’s a unique challenge compared to most holidays. I mean when you got a holiday like Christmas, Easter, and Valentines Day, anything that seems gross, inappropriate, creepy, or tacky will do. Since Halloween is known for stuff that intentionally scare or creep people out, this poses a unique challenge. If you want to know, you can see my post on vintage Halloween ads. And finding bad Halloween cakes are no exception. Now I know that many people have parties for Halloween and might also order cakes as well. Now I can do a post showing all the great scary Halloween cakes out there. But you would probably not read it at all. So instead, I’ll focus on the store bought pastry disasters that would scare even the most terrifying monster out there. So without further adieu, here are some Halloween cakes not worth scaring for.

Those are bats? Seriously, they just look black scribbles on orange icing. You’d expect stuff like that from a 4-year-old. 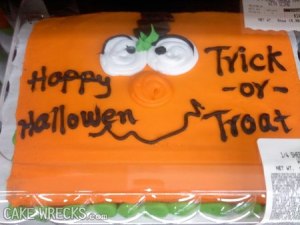 Seriously, do cake decorators not have spell check or something? Because I think people know how to spell “Halloween” and “treat.”

3. Of course, a ghost is a simple design for any Halloween cake. Let’s hope nobody messes this up. 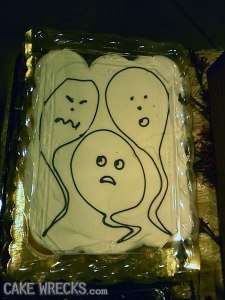 I’m sure ghosts take a fluid appearance and you can take some degree of leeway drawing one. However, these look like sperm, not ghosts. A decorator should know not to draw anything that looks like sperm.

4. Now these look like cupcakes you can really get your hands on.

Actually contrary to what Colonel Sanders once said, these don’t look anywhere near finger lickin’ good. In fact, they look very finger lickin’ bad in my mind.

5. Of course, I heard that Frankenstein’s monster is a very popular cake design this Halloween.

Okay, what the hell is this? I mean that doesn’t look like Frankenstein’s monster. He does not have a head shaped like that or teeth going sideways.

6. Well, at least this Frankenstein monster cake has a face, save for maybe the nose. 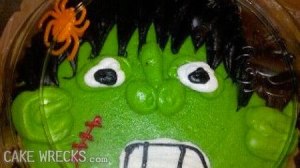 That’s a nose? Really, that looks like something that belongs between Frankenstein’s legs than his eyes. Seriously, who decorates noses like that? That’s crazy.

7. Hop aboard the Rest in Peace Bus, we give free rides! 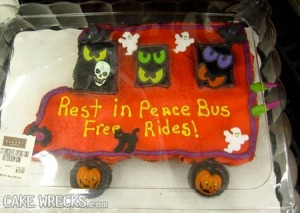 What’s with the green fingers hanging from the trunk? That makes no goddamn sense for some reason.

8. Of course, bats always carry a rather scary feature on any Halloween cake, especially in groups. 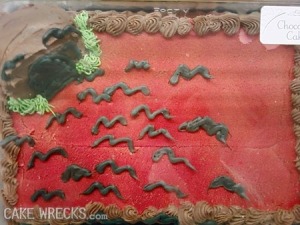 For the love of God, those don’t look like bats. They might as well be birds for crying out loud. Can’t the cake decorator know the difference?

9. Cake not scary enough? Put a spider on it. 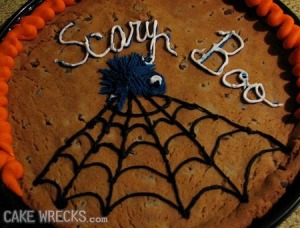 Sorry, but I don’t think a spider is helping in this situation, especially if it looks like a cute little fur ball. This cake is lame.

10. Hope your Halloween party is a blast with this vampire Elvis cake.

From Cake Wrecks: “I vant choo to stay off of my blue svade shoos! Muah! Ah! Ah!” Yeah, not very intimidating at all.

11. Not surprisingly, pumpkins are another popular cake subject for Halloween.

And this one just happens to remind me of Edvard Munch’s The Scream for some reason. Also, its nose is too close to its mouth.

12. On any monstrous Halloween cake, you can’t have too many eyeballs.

From Cake Wrecks: “I was looking at a mud puddle, and it spoke to me, and it said, ‘Give me the face of a hippie, man. Plus a crap ton of edible glitter and plastic eyeballs.’ So I did.” Couldn’t say it better myself.

13. Of course, adding blood can makes things all the more scarier. 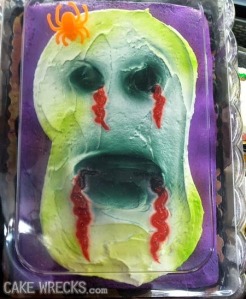 Now what is this? Ghost? Skeleton? Something from a horror movie? A bad attempt at drawing anything worth freaking people out? You decide. 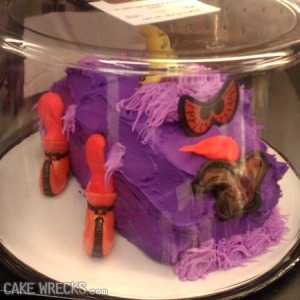 From Cake Wrecks: “What’s got four plastic feet, plastic eyes, a plastic hat, and vaguely disconcerting icing “hair” sprouting out of a purple brick? I HAVE NO IDEA WHAT IS THIS.” Me neither. Nor do I want to know.

15. When doing a vampire cake, make sure it looks like one that could suck your blood.

However, this isn’t how you should do a vampire cake for Halloween. This vampire looks like he’s an embarrassing love child of the Count from Sesame Street. Seriously, it’s too cute.

16. All right, if you can’t choose between ghost and jack o’lantern, we could just mesh them together. Nobody will notice. 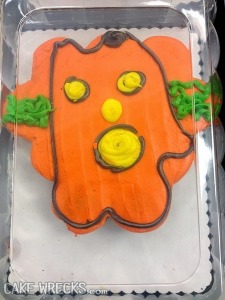 Actually they will. I mean that doesn’t look like any pumpkin I’ve seen in my life. Now it just seems to resemble a really misshapen pumpkin for almost no reason at all.

17. Always try to give your monster cake a scary face if you could.

Now that’s a face that could haunt anyone’s nightmares. But not necessarily for the right reasons though. Still, don’t what the hell this thing is supposed to be. And that’s pretty scary.

18. Beware the dreaded pod baby if you dare. 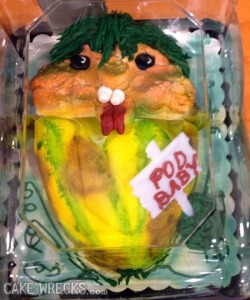 Now what the hell does this have to do with Halloween? Other than the fangs, I don’t see any point. Also, this is just so weird looking for some reason.

19. Sometimes it’s best to go simple such as a moon and night sky.

That does not look like a moon in the night sky. That looks like a banana shooting laser beams. Doesn’t make any sense whatsoever.

20. If you want a simple cake design this Halloween, go with a ghost. 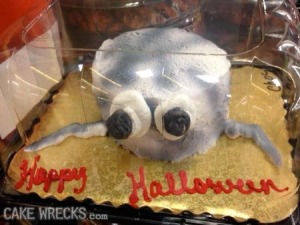 This is not a ghost. This is a roll of darkened toilet paper with arms and eyes. And now, it’s angry.

21. Remember, that yellow eyes can make a ghost look even scarier, especially semicircular ones. 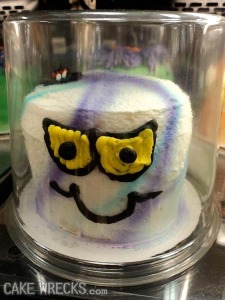 From Cake Wrecks: “I am not ‘pretty,’ I AM THE TERRIFYING TP! Here to WIPE you out! Mwuah-ha-haaawhy are you laughing?” Yeah, that does look like a really scary roll of toilet paper. Not.

22. Nothing is scarier on Halloween than a giant green monster. 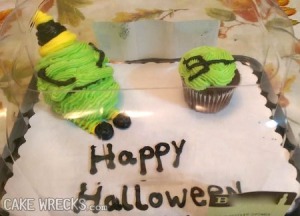 From Cake Wrecks: “Next we have an ice cream swirl wearing a traffic cone about to be impaled by a trident. Because if THAT doesn’t say “Happy Halloween”… then don’t worry ‘cuz the board does.” Yeah, kind of looks like that. Also reminds me a bit of the Pirate Parrot for some reason. Not sure why.

23. Nothing is scarier in a modern home than a possessed stove burner.

You know the kind of burners that spontaneously set fire to whole kitchens without any alert from the smoke detector. Yeah, haunted appliances are so in right now.

24. Nothing captures the spirit of Halloween more than a cake of mummified, misshapen candy corn?

Oh, my God. For one, nobody likes candy corn, let alone with a smiley face. Second, it’s even more stupid that it’s made to look like a mummy.

25. When it comes to making you gag this Halloween season, maggots can’t be beat.

Now I know that there’s a lot of gross stuff associated with Halloween. But I think maggot cakes would just make me either throw up or lose my appetite.

26. Want a creepy cake? Go with a green spider.

Yes, it has 8 legs and fangs. But it doesn’t seem creepy or scary for some reason. In fact, it looks pretty lame if I do say so myself.

27. When doing a circular cake, always stick with a pumpkin.

That’s not a pumpkin. That’s an orange baseball with eyes after a dog has just taken a crap on it. What it has to do with Halloween, I have no idea.

28. Summon your dead ancestors to your Halloween party with this Oujia board cake. 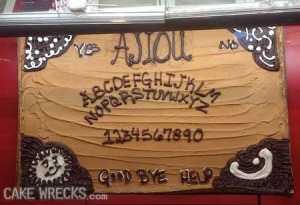 Now that’s the worst spelling of Ouijia I’ve ever seen. Seriously, where’s a dictionary when you need it. Could see that the decorator really needed help with this one.

29. Of course, ghosts cakes can have virtually any shape. 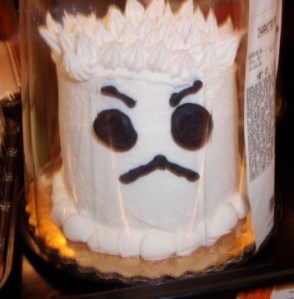 Since when does toilet paper ever get angry? I thought being an ass wipe was the gist of its existence.

30. When you don’t have a Halloween monster in mind, you can always design your own. 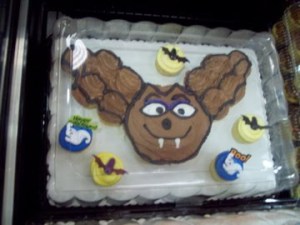 Now this is what you get when you cross Princess Leia, Dracula, a Sesame Street muppet and Bride of Frankenstein. Yeah, not very scary if you ask me.

31. Nothing makes a Halloween cake like having creepy crawlies on it.

Now I can understand why you have the spider and web. But why ants? Seriously, ants aren’t scary unless they’re as big as Godzilla like in Them! Besides, there are plenty of more suitable insects out there to give people the heebie jeebies. Ants aren’t among them.

Once again, ghosts shouldn’t be decorated to look like sperm for God’s sake. Second, what the hell do these colorful sperm have to do with Halloween?

33. Any cake can be a Halloween cake, you just have to add ghosts and pumpkins to it. 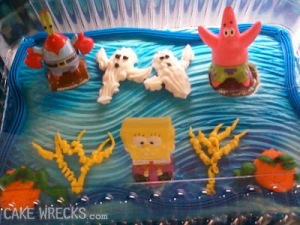 34. Of course, getting ghosts wrong can really lead to some awkward situation. 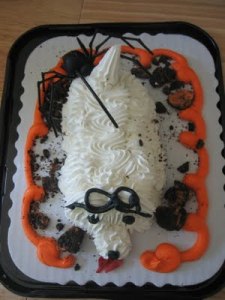 From Cake Wrecks: “WHAT in the name of sweet Lassie is that spider doing?!?” Was going to ask the same question myself. Okay, I don’t want to know.

35. Don’t have an idea for a Halloween cake? Just add some candy corn.

Candy Corn: the least popular thing associated with Halloween. It’s basically inedible sugar wax. But it’s so easy, anyone can do it.

36. You can turn any cake into a Halloween one if you just add a plastic spider. 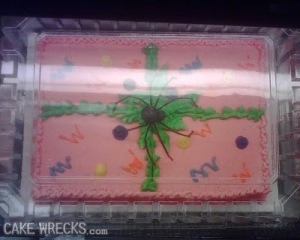 Before the spider was added, it was originally a birthday present cake. Now it’s bound to freak you out now. Yeah, spine-chilling.

37. “Have a nice day,” from your local smiley face vampire.

Now this is just wrong. I mean really wrong. Seriously, you can add fangs to a smiley face but it would never look appropriate for Halloween. Sorry, but this is just so ridiculous.

38. Need a Halloween cake fast. No problem, just stick an eyeball on a dog cake. Now it’s an eyeball monster.

Now that just doesn’t look right for some reason. I mean it more or less resembles a dog with a freaking eyeball. More awkward than scary, don’t you agree.

39. Uh, a jack o’lantern cake is supposed to have eyes, right?

Let’s just say I don’t think a blind jack o’lantern really gives into the Halloween spirit. Seriously, that just looks like something is missing.

40. Need to sell a dog cake on Halloween? Make it into a zombie dog.

Oh, that is just doggone awful. You can make it green and add patches, but you can’t make this dog even remotely scary.