Most of you might know that Halloween is the time of year when people carve pumpkins into jack o’ lanterns and other carvings. However, for those who might be bored with the idea of carving pumpkins, you might want to consider an alternative. And while doing my post on Halloween crafts, I found just the thing: pumpkin dioramas. This just entails cutting a pumpkin from the side, taking any stuff out, and decorating the inside however you please. Or you can just use a foam one wherever they sell them. And while it’s not nearly as popular as the Easter peep dioramas, you still have some of these on Pinterest. You can also see quite a few tutorials on the subject as well if you’re interested. Now many pumpkin dioramas consist of Halloween scenes like graveyards, haunted houses, pumpkin patches, and the like. And like jack o’lanterns, they’re usually lit from the inside, too. But if you’re a repressed art major or someone looking for a different kind of crafting, then be my guest. So without further adieu, here are some spooky pumpkin dioramas.

Odd, I’d usually expect a haggard witch like her to cook some potion. But this one seems to enjoy knitting for some reason. Then again, it might just be a hobby.

2. Of course, sometimes jail time can really take the life out of you. 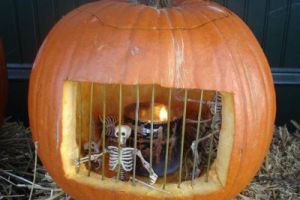 Looks like the guy holding the bars isn’t the only person who literally died in there. Just look at the others inside. He seems to have very good company.

3. So I guess this is the broom parking zone. 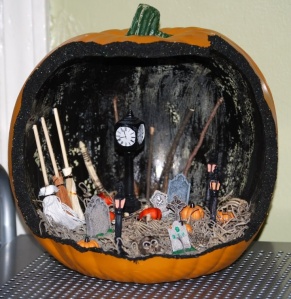 And it seems the witches got there almost twenty minutes before midnight. Of course, I’m not sure if the zombies are happy in this neck of the cemetery.

4. Looks like the owl has really made itself at home in this pumpkin. 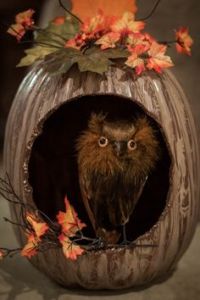 Now this is quite rustic for a pumpkin diorama. But still, really like the owl in its hole. Not very scary but very fitting for fall.

5. Of course, at night, the cemetery can be a hopping place. 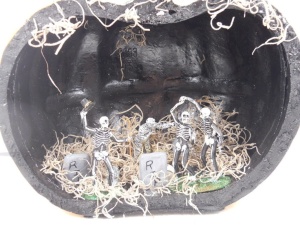 Yeah, nothing in the cemetery compares to the sight of skeletons and mummies dancing. Hey, wait a minute, aren’t mummies supposed to be in Egypt? What the hell is it doing here?

6. At some old houses, it can get quite scary at night, especially if they’re haunted.

This is especially true if the house in question has their very own family cemetery. Like the crow, though.

7. Not sure if I ever want to go into this witch’s pumpkin patch at night. 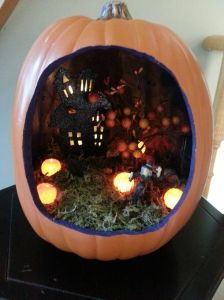 Now I like how the pumpkins seem to glow in the dark. Still, that tree seems to have a lot of large fruit.

8. The cemetery can be a rather bleak place on autumn nights.

Now this one uses twigs for bare trees as well as moss for the graveyard ground. Not sure if the leaves are real.

9. Seems like a lot of people got hanged in this area.

Now this is quite neat. Still, I’m not sure if there would be an area with skeletons on a noose like that. I’m sure people would see that.

10. Seems like the earth isn’t safe with these pumpkin aliens.

Now this is clever. This used a pumpkin as a flying saucer or UFO and small green pumpkins as aliens.

11. Looks like the zombies are out messing around this time of night.

Of course, who says that the dead aren’t a very lively bunch? Still, like how this person used a light bulb for the moon. 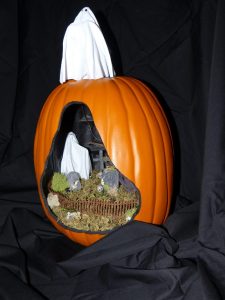 Not sure what’s under the ghosts (probably wires or foam). But I do like the one on top.

13. Guess the graveyard shift isn’t as dull as it’s cracked up to be. 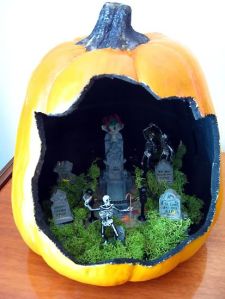 Seems like the skeletons are having fun and are making no bones about it. And there’s even one with a top hat and cane.

14. Of course, there’s nothing like spending Halloween in the North Pole.

Hey, I didn’t say that pumpkin dioramas had to be about Halloween stuff. Still, not sure if the people can fit into the igloo.

15. Nighttime is said to be when you can hear the wolf howling at the moon. 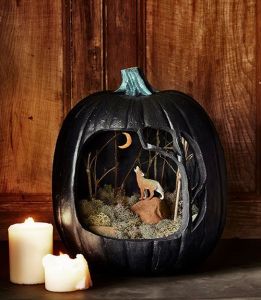 I’m not sure if wolves really howl at the moon. I mean howling could just as easily be a form of long distance communication for them.

16. Seems like this graveyard is fenced in and gives no bones about it. 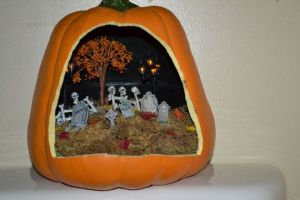 Let’s hope they didn’t get the bones from the graves. Because that would be bad. Really bad. Still, like the lamp post.

17. A pumpkin and a bouquet of black roses are all that a skeleton needs for a date.

Yes, he may be all bones by now. But he seems smiling and ready for action.

18. It’s said to be customary for some people to tell ghost stories at a Halloween bonfire.

Guess the kid dressed is Batman seems quite frightened. Then again, the lighting makes the atmosphere quite eerie.

Now that pipe cleaner tree looks straight out of some Dr. Seuss story. And that grim looks certainly menacing. 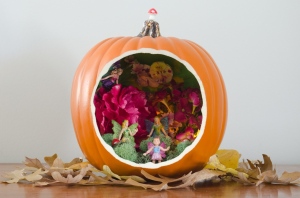 Yes, it’s a fairy scene in a pumpkin. I know that pumpkins are fall plants while flowers are spring. Yes, it’s kind of confusing.

21. Remember, it always pays to show up around dusk for the graveyard shift. 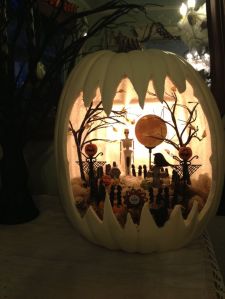 Now this kind of looks like dusk since the inside is painted white. But the skeleton looks just as menacing from the shadows.

22. This little princess is all dressed up for her Halloween party.

And it seems like she’s headed towards the snack table. Still, the decorations in the room are certainly vintage.

23. Of course, nothing captures the woodland spirit than a scene with deer.

Just so you know that you can’t shoot deer on Halloween. Because deer hunting season begins after Thanksgiving. Why the makers of Out of the Furnace didn’t know this, I’m not sure.

24. Sometimes spending time outside the casket can look quite frightening to living human onlookers.

From the view in this picture, this scene looks quite menacing, especially with the skeleton in the coffin and the other surrounding him. Still, you have to love the bow on this.

25. There are sometimes spending Halloween nights in graveyards can be a ghoulish experience. 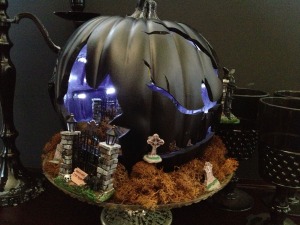 Now unlike many of the pumpkin dioramas here, this one is carved in a rather unusual way to give it a spooky feel. Still, not sure how that can be pulled off.

26. Seems like this mummy is definitely no fan of the great white archaeologist.

Finally, a pumpkin diorama with an appropriate mummy scene. However, I’m not sure if Egypt has that many palm trees near the Valley of Kings.

27. Guess the undead Wild West was quite lively in its day. 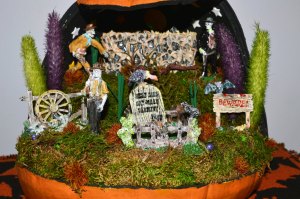 Not sure if the moss is appropriate but it sure brings a creepy vibe. Still, love the western clad skeletons in this.

28. Of course, it always pays to spend time studying in the library.

Man, kind of disappointed that this doesn’t look decrepit. Just looks like somebody studying in the library, possibly in the evening hours.

29. When doing a pumpkin graveyard scene, make sure to make it as creepy as possible. 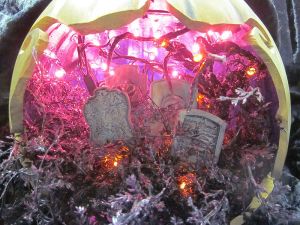 Now this looks quite messy with all the lights mangled for a pink glow sky and the ground that appears covered in last year’s Christmas decorations. Still, quite appropriate for Halloween.

30. Fall is the time when wolves howl at the full moon at night. 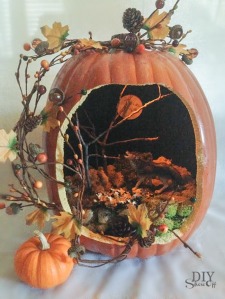 Hey, wolves don’t howl just for the sake of it. They howl to make other packs know about their family presence. There’s nothing creepy about it.

31. Sometimes you can create a whole wilderness in just one little pumpkin.

Now I wonder how someone pulled this off. Then again, the pumpkin is probably bigger than it appears in this photo.

Now this is another one of these intricately cut pumpkins. Still, I do like the lighting in this. Very eerie if you get my drift.

33. Seems like these astronauts have encountered some alien lifeform near Earth.

Now this one is quite creative. Still, not sure why the fuzzy guy in this isn’t wearing a space suit. I mean space exists in a vacuum and if you have no suit on, you’re dead.

34. Looks like the full moon is over the haunted house tonight. 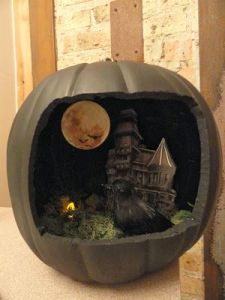 Now the props used in this seem to consist of paper cutouts. And there’s only a little bit of light to bring in some eerie atmosphere in this one.

35. Seems like this skeleton wants his jack o’lantern all to himself.

Now this one seems quite simple to make and doesn’t seem to require a lot of materials. Of course, the trees are made from pipe cleaners and don’t seem very big.

36. Looks like this skeleton wants to rise and shine out from his coffin.

Now this also looks pretty doable. Still, not sure if the skeleton is male or female. Then again, skeletons tend to be made with narrow pelvises anyway, which usually indicate male.

37. Leave a pumpkin hollowed out too long and it will become a place for a spider to spin its web.

Now this doesn’t seem to take much work at all. Then again, there’s a choice between regular spiderweb or cobweb.

38. Of course, nothing commemorates Halloween more than a pumpkin diorama of Linus waiting for the Great Pumpkin.

39. I guess this house is really haunted with ghosts. Wouldn’t you agree?

Once again, this is mostly paper decorations. However, you wouldn’t want to stay in a house like that. 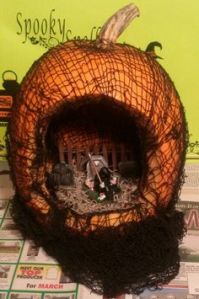 Because even though Death has a rather busy schedule, he still needs to make time for a cup of joe. Yeah, he tends to work very odd and long hours 7 days a week.

Looks a bit small for a doll like that. And there doesn’t seem to be a lot of space. Still, she might have plenty of food.

42. There’s nothing more teeth clenching than seeing a pirate having to battle snakes for his treasure on a deserted island.

Contrary to popular belief, pirates didn’t bury their treasure since most of them didn’t expect to live long. Nor did they battle giant monster snakes. Still, this looks pretty cool.

43. Remember that there’s no party like a Halloween party.

Now this one looks pretty cramped. And all you see is a table and decorations. Wonder how big the pumpkin is.

44. I’m sure a cozy home like this should be plenty for 3 witches. 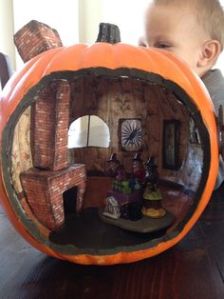 Seems like they’re making potions in there. Hope one of them doesn’t cause a fire or anything worse.

45. A pumpkin like this shows a world during the time of the dinosaurs. 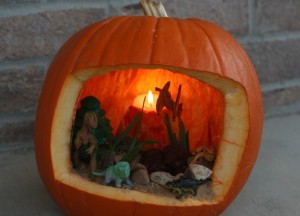 Actually this might be the Cretaceous period as far as I can see. And they were about the last group of dinosaurs before they became extinct 65 million years ago.

46. Revisit the magical world of Harry Potter with these pumpkin dioramas.

Seems like they got Hagrid’s hut from book 3 since Buckbeak appears all chained up. And I see they have Harry playing Quidditch, too.

47. For any stranded travelers on Halloween, beware of having your car break down near houses like these.

48. Of course, it’s possible that a raven will linger in the cemeteries at night.

Now that’s a clever idea. Not sure about the size of the bird in proportion to the grave stones. But, hey, it works.

49. When green light comes into play, anything can be made as eerie as you want it.

Of course, seeing a green light like this is never a good sign. Still, at least that light is at a graveyard and not at a nuclear facility.

50. It has become apparent to me that the ferocious 3 headed dog wants to play fetch with a stick.

Of course, I’m not sure what’s in the background in this one. Still, I don’t think Fluffy is the kind of dog you want to play fetch with. Dogs like that can get quite nasty.

2 responses to “The Spooky World of Halloween Pumpkin Dioramas”