To be honest, I’m not a big fan of Valentine’s Day. Maybe it’s because it’s a holiday centered around romance while I haven’t experienced much of it since most of the guys I had things for didn’t like me back or just have a funny way of showing it that I didn’t quite get which sometimes sent me to suspect the worst (you know who you are). Then again, contrary to what 30 Rock says Saint Valentine’s Day isn’t a Catholic holy day since we’re not sure whether the martyred bishop of love was a real person (not to mention that most Catholic Masses don’t last beyond 45 minutes). Still, with the exception of getting chocolate candy from my parents and flowers, I can basically take or leave it. Still, since sweethearts tend to exchange gifts such as jewelry, flowers, candy, lingerie, or stuffed animals. So there are plenty of opportunities for businesses to advertise their products. Now I can go crazy about the cute vintage Valentine’s ads like the couple sharing the Coke one above. Yet, I realized that would be more taste like diabetes and vomit inducing than the sweetness Valentine’s Day is associated with. Instead, I’ll show ads that don’t make Valentine’s Day such a lovely mid winter holiday for the greatest gift businesses can receive: cold hard cash. So without further adieu, here are some terrible Valentine’s Day ads from your grandparents’ generation.

1. This Valentine’s Day, fellas, give your girlfriend the gift you’ll need to transport with your pick up truck that’ll break your bank. 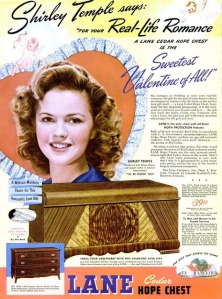 Of course, this is Shirley Temple as a teenager who could probably afford to get her own hope chest. Seriously, Valentine’s Day isn’t the kind of holiday to buy your loved ones furniture. Not to mention, these pieces of storage used to house an unmarried woman’s dowry during the Middle Ages. Save that kind of present for Christmas or her birthday.

2. Ladies, nothing says Valentine’s Day for your gentleman like a new silk necktie.

Now this is the kind of guy’s gift that says: “I didn’t know what else to give you. But I know you’re a guy and needed to give you something. So here’s what I got you for $60.”

3. This Valentine’s Day cake gives you a way to get in a man’s heart through his stomach.

Sure she may feel a kiss coming on. But her facial expression makes me think whether she’s anticipating for the poison to take effect any minute now.

Now I’m sure that beer is an appropriate Valentine’s Day Gift for a guy. Well, better than neck ties. Still, that woman looks a bit wasted in her evening clothes. And I’m not sure the dog is paying attention to her. Besides, booze also has a tendency to make a romantic candlelight dinner into something you might not want to discuss with the kids.

5. Give your loved one a gift they’d be grateful to have this Valentine’s Day, a pre-mortem funeral arrangements. 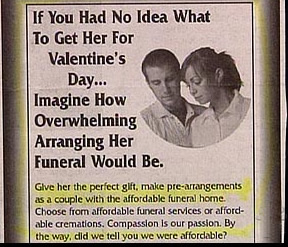 Man, this funeral is really hurting for customers. Still, this is a pretty insulting ad for men who probably have more an idea of how to arrange their wives’ funerals than knowing what to get them for Valentine’s Day. And when it comes to Valentine’s Day guys have it easy since it’s a girly holiday to begin with. 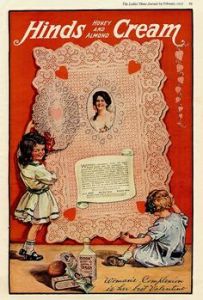 That girl looks as if the woman in the valentine is her next kill target and she more like a bitter almond than as sweet as honey. Seriously, she seems utterly terrifying and wants to knock of the woman for her jewelry and clothes.

7. Schrafft’s Chocolates are the candies that lead to a girl’s, uh, I’d like to say heart.

From how the guy’s hands are position, it seems like he’s about to put his hands on her ass as he sets them any lower. Seems like they’re about to get their nasty on to me.

8. Give your sweetheart the Valentine’s Day gift they’ll appreciate, tires. 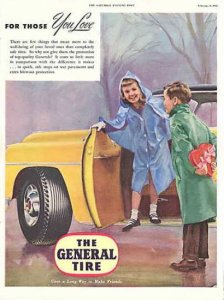 Uh, aren’t these kids a little young to be in love? Also, I’m sure they aren’t anywhere near the legal driving age in most states. I’m sure the designers were so concentrated on the cuteness. Still, I’d be a bit concerned if I were their parents.

9. Send a valentine to those you love with a card from American Greetings.

I don’t know about you but while the cards are nice, the cartoon cherub in the corner just scares me for some reason. Seriously, he doesn’t make me want to buy any of these cards, even the one with the cat.

10. Guys, when it comes to being the perfect valentine, make sure you’re the Kreml guy on the lower right.

From PopSugar: “The description for “Slicker” seems like it was pulled straight from Sue Sylvester’s Will burn-book: ‘Your dome’s so slick we don’t know whether that’s human hair or patent leather.'” Also, Curly is bald and resembles a guy you’d see from The Sopranos while the Kreml guy seems like he’s a creepy stalker of some woman’s nightmare. Not to mention, Fuzzy seems like he’s put on too much hair spray before going to bed.

11. Give her a valentine that would put  stars in her eyes and music in her heart. 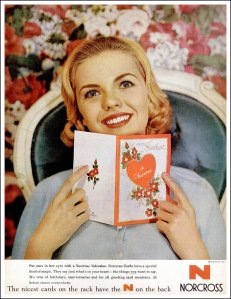 Excuse me, does she have stars in her eyes? Or is she really a lifeless fem-bot from the Stepford suburban community? You know the one that killed all those housewives and replaced them with look alike robots who’d do anything to please their husbands? Freaky.

12. Oh, he remembered Valentine’s Day! And he sent me Whtiman’s chocolate.

Of course, we should all remember just because Elizabeth Taylor’s man remembered Valentine’s Day, doesn’t really guarantee she’s going to stay with him. I mean she’s known for marrying 8 times to 7 different men (twice to Richard Burton and one to a guy she met in rehab in the 1990s). Those 7 divorces don’t come cheap.

13. For those in long distance relationships, send them a Valentine’s Day telegram from Western Union.

From PopSugar: “Ending a Valentine’s Day telegram with “guess who” sounds a teensy bit stalkerish.” Yeah, I’d think this girl might want to file a restraining order if she receives enough of them.

14. You’re never too young to give or receive Faroh’s finest chocolates! 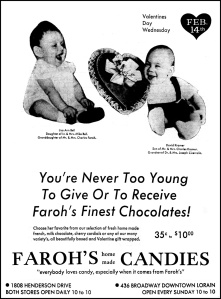 Okay, now babies in love is just pushing it. Seriously, what were these designers thinking? This isn’t cute, it’s disturbing. Babies are known for crying, slobbering, and pooping in diapers, not giving each other chocolates! Seriously, why?

15. Aim for the best with Chesterfield cigarettes. 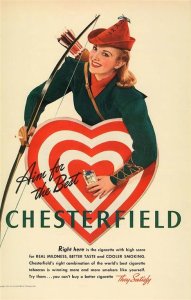 Sure Chesterfields may lead to your sweetheart’s heart. But they’ll make their lungs all filled with tar and cancerous tumors as well as turn their skin yellow and increase their chances for cardiovascular disease. Also, tobacco kills about a third of its users every year.

16. Rheingold Extra Dry Beer: The perfect gift for your man this Valentine’s Day.

“Drink up, honey buns, for I’ve prepared these 3 drinks just for you this special day. Oh, and did I mention, I don’t feel like driving tonight? Don’t forget, that you can’t be seen with a blood-alcohol level of over .08 in most states, sweetie.”

17. For your son this Valentine’s Day, why don’t you pack him a sandwich for school with Mor: a thrifty meat.

Of course, Mary loves Jimmy and she’s very concerned for his well being and his meat sandwich fantasies. I mean we all know that eating processed salted meat isn’t good for the cholesterol in the least. Also, it’s disgusting.

18. Please your valentine with these Manhattani peppermint pajamas.

From Popsugar: “My best guess for this one would have to be: wear comfy PJs on Valentine’s Day because after all that chocolate you’re gonna want something loose.” Also, the man kind of remind me of Mr. Bean for some reason and he seems a bit self-conscious about his weight.

19. Nothing says sex and romance on Valentine’s Day like V-Day pajamas for the whole family!

Now giving your significant other lame Valentine’s Day PJs are one thing. But giving them for the whole family, who the fuck had that crazy idea? I’m sure young Billy would really appreciate getting printed hearts on his PJs for Valentine’s Day. Of course, he’ll probably never wear them again after this picture.

20. Give her the gift of chocolate with Whitman’s candy sampler. 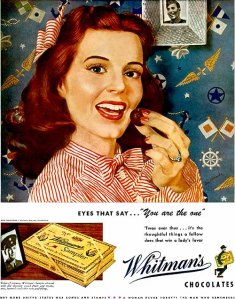 Is it just me or is that a really creepy horror version of Katharine Hepburn eating some chocolate? Of course, she takes a chocolate in her mouth every time before going on her daily homicidal rampage.

21. Heads, you win! Seriously, what does that mean?

Oh, I see. Guys, I don’t think these ladies want chocolates. Rather I think they actually want your head on a platter. Seriously, their soulless eyes know nothing but the sweet taste of man flesh these lady night terrors crave. Yes, they’re literally man eaters and watch out, boys, they’ll chew you up.

22. Nothing satisfies a man this Valentine’s Day than a shirt and tie from Arrow. 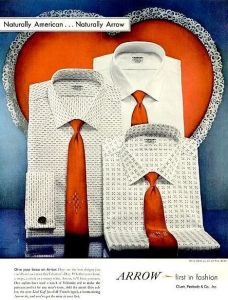 Now I know that men are very hard to buy for on Valentine’s Day since is a girly holiday. Still, I’m sure a dress shirt and necktie aren’t gifts men really want to see from their ladies. Seriously, you’re better off getting him a team jersey or Grand Theft Auto.

23. Now what to give a woman? Vacuums or flowers?

Seriously, give her flowers, boys. Sure they’ll wild and need put in the garbage one day. But still, at least she won’t be insulted as if you treated her like the maid giving a vacuum. Seriously, vacuums are terrible presents for women during any occasion. Not to mention, they never give you any peace and quiet while they’re running.

24. “People all over the world (everybody)/Join hands (join)/Start a love train, love train.” 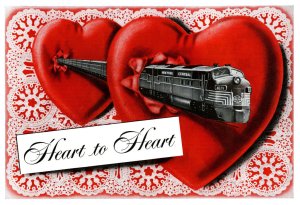 From PopSugar: “Watch out, cuz after that train goes through your heart you’re pretty much dead.” Not to mention, when see that love train going through those 2 hearts, I’m sure that’s not what the O’Jays had in mind when they recorded, “Love Train.”

25. Remember “Remembering Day” and give me chocolate. Or else. 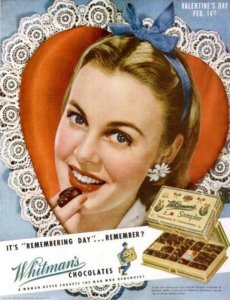 From PopSugar: “If your man doesn’t remember Valentine’s Day with all the holiday advertising madness, he’s either blind or a hermit.” Also, I don’t know about you but this woman seems to give me the creeps as if she seems to have murder on her mind.

26. Give the ladies in your life the gift that’ll last a long time: granny panties.

What’s even crazier is that this mother and daughter are so happy swinging on their little swings you’d find outside on a tree or swing set. Swinging in your underwear: now that doesn’t seem an appropriate activity during the middle of winter. Also funny that these are called, “Lollipops Bubble Duds.”

For some reason, receiving a heart shaped box of frozen peas doesn’t seem nearly as romantic as getting a box of chocolate. Seriously, who wants peas for Valentine’s Day for God’s sake? Farmers?

28. Remember, guys, the Whitman master won’t quit at 5 this Valentine’s Day so give your girlfriend chocolate. 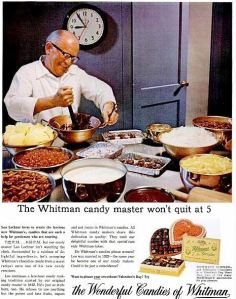 Of course, I hope that guy doesn’t work himself out. He looks quite old and seems like he’s pushing it. Seriously, how does this guy get any sleep? 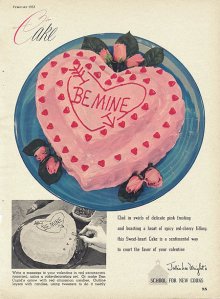 From PopSugar: “How to feel bloated on Valentine’s Day — so romantic!” Now this cake looks so Pepto Bismol pink that it’s almost making me sick. Seriously, this looks so disgusting that it has diabetes all over it.

30.Nestle chocolate: A great way to a woman’s heart. 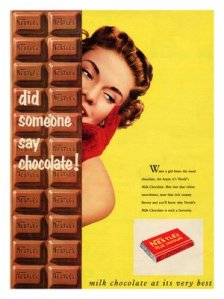 Follow The Lone Girl in a Crowd on WordPress.com
Join 1,526 other followers