A popular Valentine’s Day present is a stuffed bear with moveable arms and legs. Since its introduction in 1903 and named after Teddy Roosevelt, these toys have become among the most popular ever since. After all, they’re fuzzy, cute, cuddly, and you can dress them up however you like. Thus, you can see all kinds of teddy bears dressed for holidays, special occasions, and characters from pop culture. There are even teddy bear museums where these toys reenact certain scenes. So for your reading pleasure, I give you another assortment of adorable teddy bears. Enjoy.

He’s based on the WWE wrestler, the Undertaker. Wonder why he’s not wearing a shirt with his suit.

2. You’d swear this teddy bear can glow in the dark.

Actually, it lights up inside. I’m sure batteries are included.

Sure, she may not be the saint we think she is. But come on, she and her bear order nuns look cute in these sari habits.

5. You’d think this bear was some Einstein.

Okay, he’s supposed to be dressed like famous physicist Albert Einstein. Has E=mc squared on his paw.

6. Watch out for that iceberg.

This is supposed to be the teddy bear version of the Titanic. A lot of bears lost their lives that night.

Here’s a Boyd bear with a small suitcase. Wonder why he travels light.

8. In China, don’t forget to see the tomb of Emperor Qin.

This one has a bear terra cotta army. And yes, bear tourists take pictures of them.

9. Germany unites with the fall of the Bearlin Wall.

Here some bear tears down the wall which will later symbolize the fall of Communism. So East and West Germany can unite as one.

10. These bears are globe trekking.

Since they’re a family of tourists. Though I don’t think tourists dress like these bears in real life. So cute. 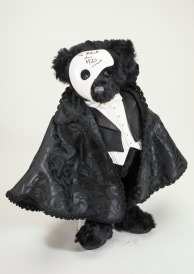 This is a Phantom o the Opera bear. Hopefully, he doesn’t sing like Gerard Butler.

12. You won’t be chilly for this Winterland Queen bear.

She wears a blue sparkly dress. Not to mention, she’s a ripoff on Queen Elsa from Frozen.

She wears a purple hat with deep pink flowers all made out of felt. Also like the purple sash. So pretty.

Though so far, he hasn’t managed to gain much traction. As we can see with the results in Iowa.

Here he’s in his workshop making toys. Before he goes out to deliver them for that one night.

16. You’ll find nothing wooden with this nutcracker.

Well, this bear is dressed up as one. But he won’t really crack nuts. Because he’s plush wearing felt clothes. 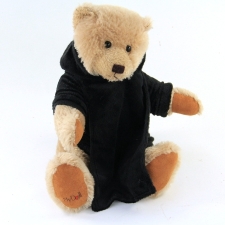 Since he’s a monk. So he’s just wearing a plain black robe. So cute.

18. Beware the Queen of Hearts.

Because if you slight her, she’ll have you beheaded. Doesn’t matter if you’re an outsider or one of her card soldiers. 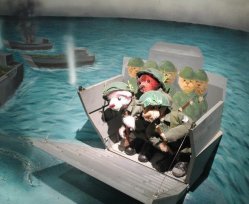 Yes, these bears are reenacting D-Day. And yes, some of them will not survive the invasion. But they’re fighting Nazis for God’s sake.

20. This Teddy Bear is ready to ride.

Since he’s a teddy bear of Teddy Roosevelt. For the teddy bear’s named after him.

21. Want a cold drink with this polar bear?

No thanks for me since I don’t drink pop. But he’s nevertheless an iconic bear that you see around Christmas.

22. The Pope emerges to greet the crowds.

Here he stands between 2 cardinal bears with his long crucifix staff. Yet, unlike human popes, he doesn’t wear shoes.

23. You’d think this bear was out on safari.

Since he’s clearly wearing such an expedition outfit. Even carries a sleeping mat. So cute.

24. This chili pepper will bring some spice to your life.

It even comes with maracas. You’d almost think it works at a Mexican restaurant.

Since he’s dressed as a glass of beer. Though I’d recommend not to let him drive you home from the bar.

26. Many swear to have seen this Sasquatch bear.

He’s fuzzier than most. Yet, despite numerous sightings, scientists question his existence.

Though there’s only a 1 out of 3 chance he accepts Medicaid. If you live in the US, that is

28. Here some rich bears gather for a game of polo. 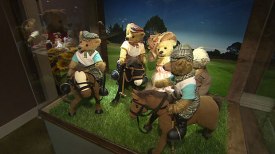 They ride on plush horses and use sticks to move a ball. And no, I don’t understand how polo works.

29. This bear works all the livelong day on the railroad.

30. Check out the tatt on this sailor.

It’s one of a heart on his arm. Yet, how can you tattoo a bear, I have no idea.

31. The Korean streets are rather bustling. 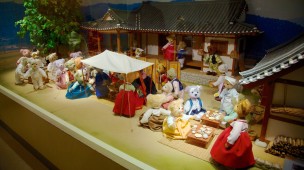 This one has marketplaces, tables, and a tent. Then again, it might be outside the palace. 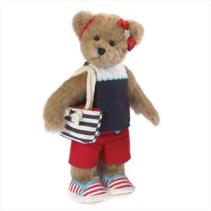 Though I’m not sure if she’s just going on a summer stroll to the park or the beach. Then again, she’s not wearing tennis shoes so it’s probably the latter.

33. Here we come across a royal procession.

Okay, this is a Korean procession. Since a lot of teddy bear museums are in South Korea for some reason. But you have to admire the time and effort people put into this.

34. This bear will put out fires for you.

Okay, maybe not. But you can cuddle with him as your relationship with your significant other crashes and burns.

35. Someone’s ready to race for once.

Since he’s the cutest auto racer you’ll ever see. Hope his car doesn’t crash and burn.

36. This guy always supports his mom.

For he’s her #1 fan. Though at least he’s not creepy about it. Unlike Oedipus.

37. You’d make yourself at home in this Korean village.

Yes, you find a lot of Korean stuff in these teddy bear museums. Since most of them are from South Korea. Don’t know why that is. 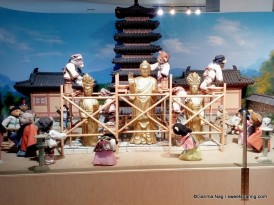 Guess this is for a temple or shrine. Not sure why the golden Buddha statues don’t look like bears.

39. This bear pilot is ready for takeoff.

40. Guess Koreans really know how to put on a festival. 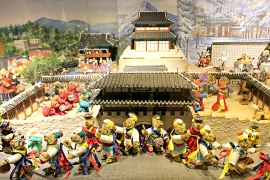 This one seems to have plenty of ceremonial dancers. From a teddy bear museum in Seoul.

41. The Netherlands has a peaceful countryside.

This one features windmills and tulip fields. So you can guess this is a Dutch display.

42. The Korean king sits on his throne. 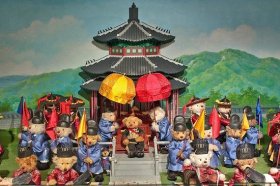 Guess this ceremony must’ve taken place between the 19th century and the Korean War. Because we know the Korean kingdom’s no more nowadays.

Here she wears a red dress and carries a purse. Like the matching bows on her dress and ear. 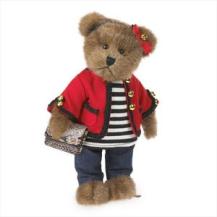 Here she wears a striped top with jean. Also carries a purse. Like the gold buttons.

45. You’ll be enchanted by this fancy dress ball. 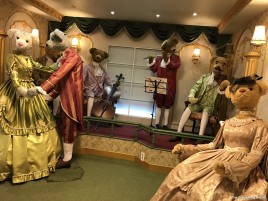 The display’s not very big. Yet, you’d have to admire the fancy clothes, especially the dresses.

It’s basically a teddy bear version of Mount Rushmore. And yes you got some teddy bears in the foreground.

This is an old fashioned school house scene from a teddy bear museum in Germany. Because each kid has their own chalk board.

Since he’s a Harry Potter bear. shown with his scar, hat, and Quidditch broom.

Some of the animals here are in plush as well. While the bears frequent the premises. Wonder what the bear exhibit is like.

She’s a Boyd’s Bear. She wears a dress and felt wings.

This is from a teddy bear museum in Dorset. And yes, these servants are washing dishes.

52. You’d think this family is rather well-to-do.

You’d see a family like this on Downton Abbey. Except that they’re bears. From a teddy bear museum in Dorset.

He stands near a chair in a black turtleneck. Though his claws won’t hurt you.

54. Klawlo Ren will finish what his grandfather started.

Though watch out when he whips up his lightsaber. Since he’s been known to go to town on it like slicing and smashing things.

This is a ghostbuster bear. So it has the logo on its paw inside its shoes.

56. With Genie bear, he’ll grant you 3 wishes at your command.

I’m sure this one was for the live-action remake with Will Smith. As I can tell from the beard and outfit.

57. Rey always knows how to fight with her staff.

Of course, her bear version doesn’t have her intricate hairstyle. But wait until she gets a hold on a lightsaber.

58. Darth Bearder’s on the Dark Side of the Force. 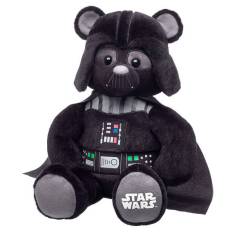 And yes, he’s black with ears on his helmet. But he still needs to wear his suit in order to live. After what Obi Wan Kenobi did to him. 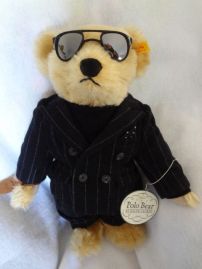 Since this bear’s wearing a black coat and sunglasses. So you may never know. 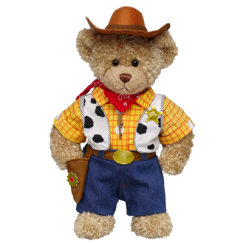 Here this bear wears the Woody get up. Afraid of getting replaced by a space toy, if Buzz Lightyear gets any hint.

Here he goes on one knee with a ring. Great for a guy who wants to marry a girl who likes Marvel and has a sense of humor.

62. Jasmine can always be a princess to impress. 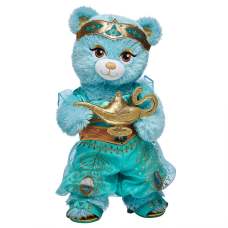 Though you have to admit, she does have daddy issues. Yet, she doesn’t hold the lamp in either the Disney or the live-action version.

He also shows the wonders of performance enhancement drugs in the Marvel universe. Still, this bear of him is blue.

64. Cinderella is all dressed for the ball. 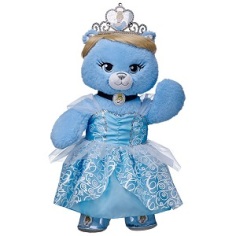 Though the magic will wear off by midnight. So she’ll only have her glass slippers left. Or one glass slipper left since she left the other at the ball.

65. Queen Elsa knows how to stage a freeze.

Here she’s in her Frozen II outfit. Seems more at home with herself than in the last movie where she doomed her kingdom to eternal winter.

66. Someone can use another tissue.

This is a get well bear in pajamas. Then again, he’s got a hanky so he’s good. So cute.

67. You’ll be fine against this Stormtrooper bear.

Because while Stormtroopers may shoot up a place, they usually don’t hit anything. Though they can be dangerous.

68. Harley Quinn is no laughing matter. 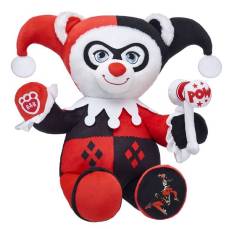 Yet, for God’s sake, don’t romanticize her relationship with the Joker. Because he’s a raging psychopath who’s very abusive to her.

69. No one can resist this Ewok bear. 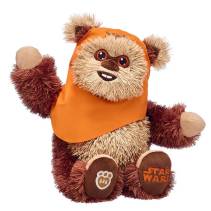 Ewoks are pretty much teddy bears to begin with. But they will try to eat you and kick your ass.

70. Rapunzel gets all Tangled.

Her bear’s purple with long blond hair. But not long enough to hang from a tower to use as a ladder. That wouldn’t be safe for kids.

These are Beauty and the Beast bear set. Come with a rose. So adorable.

72. Ariel comes from under the sea. 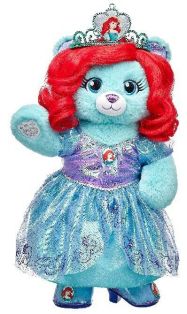 She’s basically a teenager who sold her voice for some plastic surgery. And from a shady sea witch no less.

73. This Irish lass can dance.

For she’s an Irish river dancer. Even has her dancing shoes on.

She wears a hula skirt, a flower lei, and a coconut bra. Hope se doesn’t dance when the volcano blows.

75. No one can stop Captain Marvel.

Here she springs into action. Know that she’s about as powerful as Superman.

76. “Give me your tired, your poor, your huddled masses yearning to breathe free….”

She wears the green garb of Lady Liberty. Unfortunately, her words are being undermined by Donald Trump’s anti-immigration policies and family separations.

This bear wears a mask and cape. And he’ll beat the hell out of villains from Arkham Asylum.

78. Thanos Bear wants to wipe half of the universe.

Already he’s got his Infinity gauntlet on. Uh-oh. Don’t have a good feeling about this. 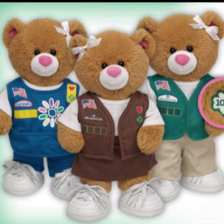 Here they wear outfits denoting ranks. But please pay for the cookies or they will end you.

He’s supposed to be a Cousin Eddie bear. Still, don’t all bears shit in the woods?