Now that Christmas is over and the new year has begun, NCAA Division I college football stages their national championships. Of course, you have a lot of college teams playing each other in bowl games that really don’t mean a thing. Seriously, why can’t they just have a playoff with each conference champ? That makes perfect sense. Because I don’t understand why the NCAA Div. I has the championship system for football. Anyway, it’s not unusual for fans to have their little parties and bring some treats. So for your reading pleasure, I give you another assortment of treats relating to NCAA Division I sports. 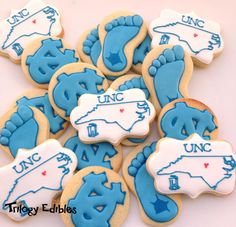 Some of them consist of feet. Since their mascot is the Tarheel. Get it?

2. Perhaps Georgia Bulldog fans want some of these cupcakes. 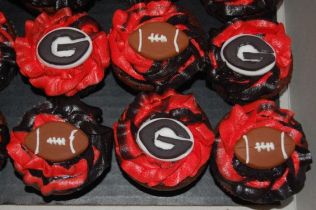 These have footballs and the school logos on them. While the icing is in red and black.

3. No Longhorn party should be without this stadium cake. 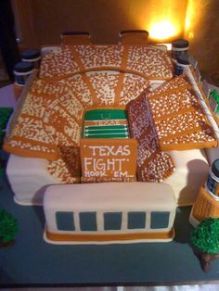 This is for the Texas Longhorns. And I suppose the stands must be made from graham crackers.

4. A Michigan cake should always have a sugar M. 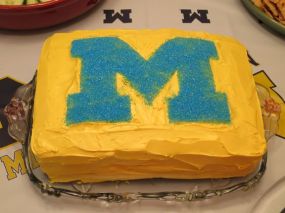 This one had to use a stencil. But you get the Wolverine impression.

5. If you want a more sophisticated cake, this Texas A&M one may be exactly what you ordered.

This one has the Texas A&M seal on it. While it’s surrounded by chocolate covered strawberries. 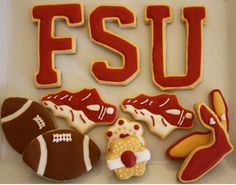 You can see it includes footballs along as 2 Floridas that resemble boomerangs. And all in yellow and red.

7. With these cookies, you will be a hit in Buckeye nation. 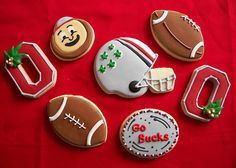 Unlike most Division I college teams, Ohio State actually has a shot at the championship. Though their mascot is the stuff of nightmares.

8. Can I interest any Mountaineer in this WVU cake?

This one is 2 tiers with a WVU helmet on top. Includes chocolate covered strawberry footballs.

9. Gators fan would take a bite out of these Florida cupcakes.

Some of these have the F on the logo. Others have a gator. All look delicious and professionally made.

10. On a cold day, take a cup of hot chocolate from Michigan State.

It’s a Spartan cup above the rest. Though I’m not sure how this image shows up on the cup.

This one has a red “O” with a buckeye bough. Because Ohio is the Buckeye State.

I guess these were made for a tailgate party at Baton Rouge. Yet, all are iced in purple and yellow glory.

These seem rather home made. While the “O”‘s are white.

14. Anyone from Oregon State will enjoy this beaver cake. 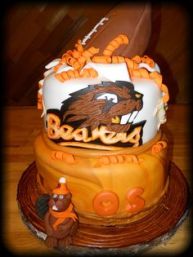 You have to wonder why Oregon State has a beaver mascot, given how it’s a euphemism for lady parts. Sure beavers are tough animals. But a beaver mascot is about as ridiculous as a duck.

15. Perhaps I can interest Oregon fans with these cupcakes.

These have “O”‘s on the icing. Perfect for Oregon Duck games.

16. You’ll score a field goal with this Ohio State cake.

This one has 2 tiers with a goal post on top. The bottom one has gray and red diamonds. The top one has stripes.

17. A LSU stadium cake is perfect for a Tiger game day.

This one seems quite detailed. Even includes stadium lights. So it’s really expensive.

18. It’s always hats off to Michigan. 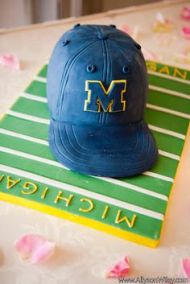 This is a Michigan hat cake. While it’s on top a football field without numbers.

19. Take your pick of these Ohio State cakes.

You have buckeyes, O’s, Brutus Buckeyes, and stripes. And each with icing on top.

20. Wolverine fans will gobble up these Michigan cupcakes.

All are topped with yellow icing and an M. And yes, they’re professionally made.

21. Louisville fans would crave for a cake like this. 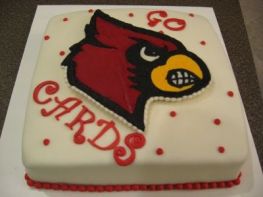 This one depicts an angry cardinal, too. But lucky for Louisville, March Madness is a couple months away.

22. A Bulldogs fan could only wish for a cake like this during football season. 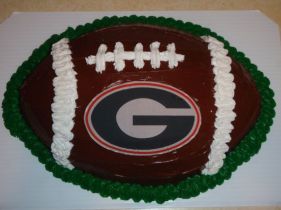 This just consists of a football with the Georgia logo on it. Perfect for tailgate occasions.

23. Those with bearcat pride would love this cake from Cincinnati.

This one even has the Bearcat mascot on top. Yet, it doesn’t give me a favorable impression.

24. Mizzou fans might want a slice of this field cake.

This one even has numbers on it. While the black and yellow logo roars at the 50.

25. Apparently, someone TP’ed this Auburn cake.

Guess this must be a tradition at the school. Also shows a large orange tree with roots.

I’m sure these were made for football season. Includes the WVU helmets.

28. These Michigan football cookies will have you ready for the season.

All of these are covered in icing. Some are helmets. While some are footballs.

30. Nittany Lion fans would water at these Penn State cookies. 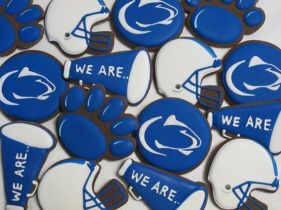 These seem to be chocolate from what I can tell. Though each has a degree of blue and white icing.

31. A TP’ed tree belongs on top of an Auburn cake.

Oh, yes, the TP’ed tree must be an Auburn tradition. Still, this one has 3 tiers with the middle in tiger stripes.

32. Strawberries always belong on a cake from Texas Tech.

While all these strawberries are covered in chocolate. While the bottom tier has chocolate diamonds.

33. Support your Florida State Seminoles with this cake.

This one has the Seminoles logo on it. While spears are on the edges.

34. You’ll find plenty of Buckeye nuts on this cake. 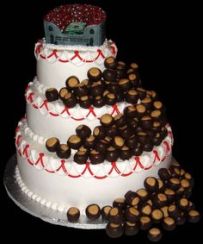 This is for Ohio State naturally. And the nuts are on 3 tiers.

35. Indiana fans will bask in this Hoosiers cake.

This one is for basketball season. Though we don’t think of Indiana U basketball when Hoosiers and b-ball are in the same sentence.

36. If you’re a Texan who loves the Bears, then these cookies are for you. 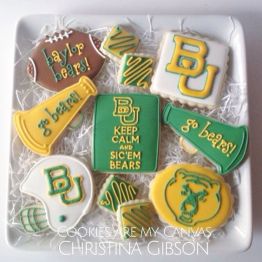 These are from Baylor by the way. Each with degrees of green and yellow icing.

37. You have to be nuts to ignore these Ohio State cupcakes. 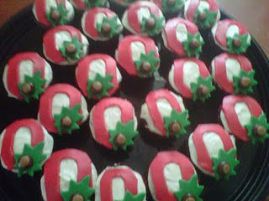 These have a red “O” and a Buckeye branch on it. All on top of white icing.

38. You can always roll tied with these Alabama cookies.

Funny, that I didn’t have any Alabama treats in this post yet. Even includes elephant cookies despite that Crimson Tide is algae.

39. Michigan fans can feast on this stadium cake.

For some reason, there’s a trend in stadium cakes. This one is for the Wolverines.

40. Perhaps you’d want a bite out of these Ohio State cupcakes.

These form the “O” in Ohio State. While some may have Buckeyes on it.

41. You probably don’t want to save this Gator cake for later. 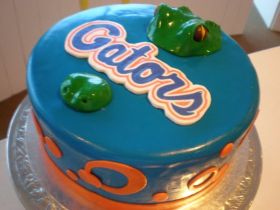 This one has a gator below the water. So Florida fans would rejoice.

Not sure if this was a cake project or professionally made. Still, it’s kind of amazing.

43. Some of these WVU cakes are striped. 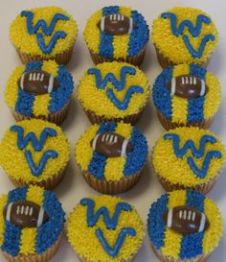 Some have the WVU logo in icing. Some have footballs on top of stripes.

44. A Florida Gator is always on top for football.

This one has a gator standing up to throw the football in a pass. Only in Florida.

45. Any Arkansas State fan would gawk at this Red Wolf cake.

Even has a red wolf on top of a football field pattern tier. Yet, this cake is supposed to be for a 6-year-old boy.

46. For big parties, this Ohio State field cake will suit you nicely.

This one has the logo on the field. Even has footballs on the edges.

47. Any Michigan clarinetist would adore this cake.

The band hat is on top of a snare drum tier. While the clarinet is beside it.

48. You can’t spell “love” without Villanova.

49. These cupcakes go blue for Michigan.

These have blue tops over yellow icing. But only some of them have an M.

50. Baylor fans would have a beary good time with these cookies. 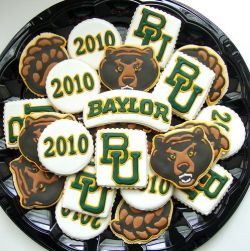 These have bears and the Baylor logo. Some even depict claws.

51. Any Buckeye fan would want this Brutus Buckeye cake. 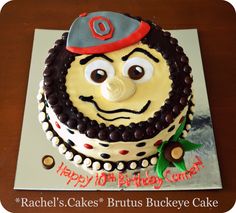 This one is from a shop. Yet, I have to admit Ohio State’s mascot is utterly creepy.

52. No Hoosier fan would say no to these Indiana cookies.

Funny, how the logo appears to resemble a fork. Professionally made in red and white icing.

53. Apparently, this WVU cake has candles on it. 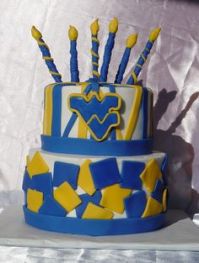 Though I think the candles are fake, especially the flames. Like the tier patterns though.

Some of the cookies have sticks. While some consists of bones and jerseys.

55. Penn Staters will relish in these paw print cookies.

These are in a cookie cutter circle shape in white and blue icing. Perfect for tailgating at State College.

56. Aggie fans would delight with these cookies from Texas A&M.

Guess these are all associated with Texas A&M. And yes, they’re meant for a birthday. 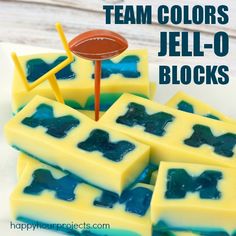 Each of these is a yellow square with a blue M block on it. The football and goal post are just decoration. 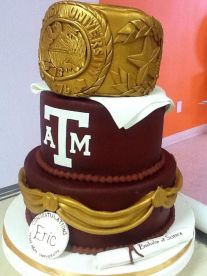 The ring is gold and sits on 2 tiers. While it’s meant to celebrate someone’s graduation.

59. A Cavalier would die for this cake. 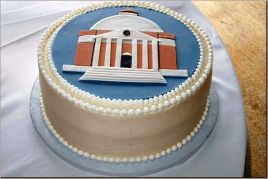 This denotes the University of Virginia, which Thomas Jefferson founded. And it’s in Charlottesville.

60. A Bulldog cake is perfect for any Georgia fan. 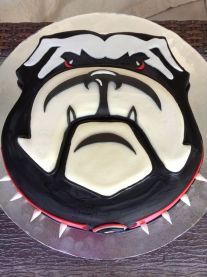 This one has a spiked collar. Though the spikes are made from white icing. 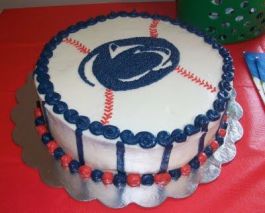 Though college baseball doesn’t get a lot of publicity due to the end of the school year stuff. Still, at least they didn’t have a bat cake since that would look really terrible.

62. Nothing makes an ideal game dish like Michigan pasta salad. 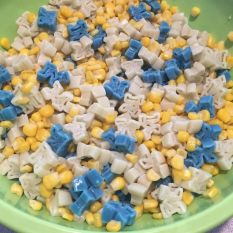 This one consists of Michigan noodles and corn. Because corn is yellow.

63. If you’re from Central Florida, you might want this cake.

This one has a football on top. While the top tier is decorated as a field.

64. Perhaps an Arizona cake will suit any Coyotes fan.

This one has red and white stripes on with the Arizona logo. While it’s trimmed with red candies.

65. Arkansas fans will go hog wild with this Razorback cake. 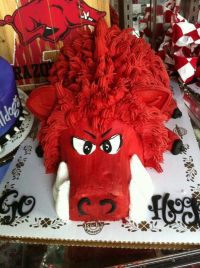 Well, hogs can be quite vicious animals you don’t want to run into. And look at those gnashing teeth.

66. Any Hokie would want to taste these Virginia Tech mini cupcakes.

These are chocolate with VT on dark red and orange icing. Bet they’re delicious.

67. Any Auburn Tiger would put for this Aubie cake. 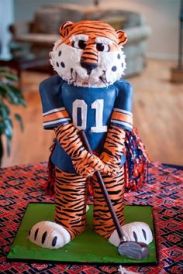 Apparently, Auburn has a golf team. And yet, Aubie wears a football jersey.

These consist of waffle pretzels, white icing, and blue M&Ms. Easy to make for any game.

69. Salute your Wolverines with this Michigan blueberry pie. 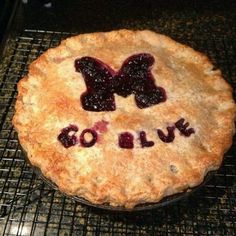 This one has an M and “Go Blue” on the crust. Want a slice?

70. You always need raspberries for an Indiana pie.

I’m sure the pie is cream and made with a store crust. Still, I don’t think Hoosiers would complain.