Back in the day, people would often send Christmas greeting cards to each other. Now like many Christmas traditions, the practice of exchanging cards during the holiday season began during the Victorian era. As you can imagine some of these cards might evoke some sentimentality with its Christmas imagery. Yet, there are some that will make you go “what the fuck?” Over the years I’ve done annual vintage Christmas cards posts, the older ones tend to be the crazier. You have to wonder whether the designers of these baffling cards wanted to be creative or funny. Or they had no idea what constitutes as an appropriate Christmas card. Or they were willing to try anything. Of course, when you think of old-fashioned Christmas cards, these don’t usually come to mind. But they do exist and I intend to show some of them. So for your reading pleasure, I give you another assortment of crazy Christmas greeting cards that time forgot. Enjoy.

So this is another Santa in space card. Wonder how Santa doesn’t manage to suffocate and die. Is his suit magical?

2. Wishing you a jolly Christmas from the local neighborhood psychokiller.

For how else could you explain a bloody saw on a Christmas card? Seriously, a bloody saw doesn’t represent Peace on Earth to me.

3. All aboard on the Santa Express.

Yet, Santa seems way too big for the engine since he’s sitting on it like a toy. Still, there’s plenty to go around for all the kids. Yet, they just want his Christmas tree, which is not for sale.

4. Nobody wants to see Krampus out in the snow.

Seems like he’s got a frightened kid already. But apparently, there seems room for more despite how full his basket seems.

5. Careful not to get stuck in the Christmas pudding.

Apparently, these kids didn’t get the memo. Or they’re digging into the pudding like ravenous ants.

6. Apparently, Santa has started delivering gifts via airship this year.

“Here’s a dolly for Susie and down the chimney she goes. Now on to the next house since I have to make millions of visits within 24 hours.”

7. Seems like we’ve got a few kids hiding in the tree. 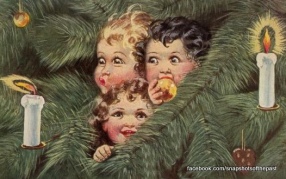 For one, a tree with candle lights is a fire hazard. Second, is that kid munching on an ornament? Third, the 2 kids on top scare the hell out of me.

Okay, I can see why Victorians would go for this since cats are cute. But cats solving math problems hardly fits the idea of Christmas. Yet, one doesn’t seem to pay attention in class. 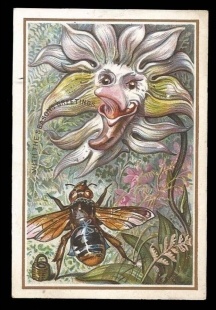 Now that has to be one of the freakiest flowers I’ve ever seen. And it seems to be among the carnivorous types about to devour a bee with a basket.

10. Battling ants give compliments of the season. 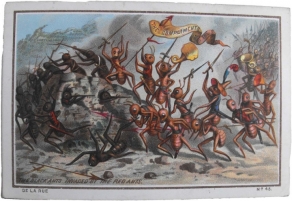 This scene would be epic for a war movie. These guys got weapons and instruments. It’s very impressive. But what the hell does it have anything to do with Christmas? It’s about peace on earth, not mass ant slaughter.

Apparently, there didn’t seem to be much traffic enforcement in Victorian times. And the horse is about to run into a blind man, which you can tell by the sign he’s wearing. It’s up to his dog to save the day.

12. Frosty is pleased to make your acquaintance. 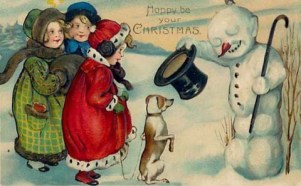 Yet, the girls don’t seemed freaked out by the snowman coming to life and taking off his hat like a gentleman. Even the dog is intrigued.

So this season’s greetings is coming from a flying jellyfish. How the hell is that possible?

14. “Wishing you a merry Christmas” from a pair of stiff upper-lip cats. 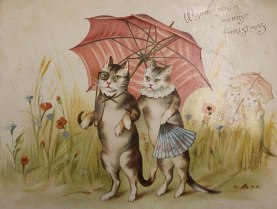 Indeed, they’re on a Sunday morning walk through the meadow. But their relationship hasn’t been the greatest lately.

15. “May Christmas pass as merrily with us/As with the enterprising little puss/Who quite enjoys flirting and the fuss.” 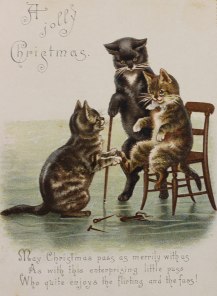 So the cat’s basically making the moves on a lady cat. While her father watches so they don’t get too frisky.

16. “Wishing you a purr-fectly happy Christmas” from cats on a whistle.

Apparently, the Victorians seem to like cats a lot. Still, how they got on the whistle, I don’t have the slightest idea.

17. “Now dance and jump and make good cheer/For Christmas comes but once a year.”

However, that chicken hasn’t been in good shape. While the rabbits play on.

18. Best not to disturb the birdhouse. 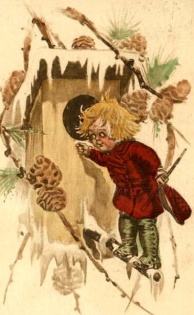 Yet, I don’t think he’s come for any benign intent. If he wakes up the bird, he’s bound to get pecked to death.

19. Nothing makes Christmas like throwing snowballs on a local policeman. 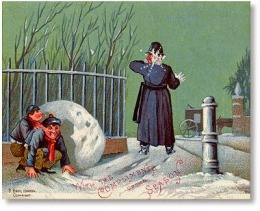 It’s all fun and games until the bobby gets his stick out and chases them. Yeah, might want to go back inside.

Really? Oh, I see they’re ice skating. Yet, I don’t think winter weather is nice for young ducks. That would be spring.

21. Krampus always knows how to make a clean getaway. 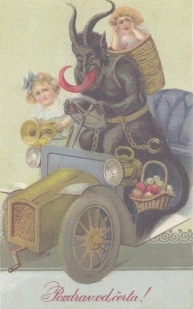 So, kids, sit back and relax since Krampus is about to take you through the highway to Hell. Though he does have a basket of apples for refreshment.

22. Perhaps the Krampus will take you on a sled ride. 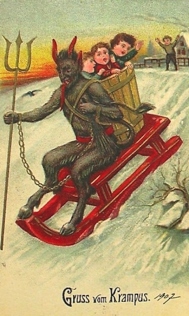 The kids in the basket are waving goodbye to the one left behind. Wonder if the children are putting on a brave front since they don’t seem scared.

For the Krampus is coming to get this girl. Yet, she doesn’t seem to have any idea he’s around.

Obviously, the kids would be reluctant to go into a fiery death. But as far as Krampus is concerned, they shouldn’t have acted like brats in the first place.

25. The fishermen fish wish you a merry Christmas. 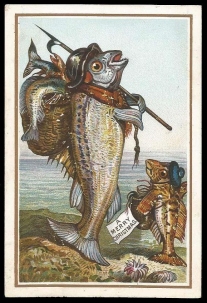 I know fishes eat other fish. But this Christmas card is absolutely ridiculous. Seriously, why?

26. “Make every cat grow sleek and fat on turkey this Christmas day.”

And yet, the turkey on the table appears quite small. While the cook cat cries for not being able to find a bigger bird to eat among the mass outrage.

27. Nothing says Christmas like gnomes gathering round the Christmas tree in a rustic cabin.

So the elder gnome sits smoking his pipe. While the smaller gnomes dance around the tree. Are those supposed to be his children? Also, what’s that pig doing in the window?

28. Even the Krampus is in the mood for love once in awhile.

Apparently, despite his appearance and reputation for kidnapping children, he’s a hit with the ladies. Not sure why since I wouldn’t want to go 100ft near him.

It’s possible that a pig pulled sleigh can be done. But pigs aren’t known for smelling that great. Yet, this girl doesn’t seem to mind.

30. “A Merry Christmas to you” from some classy owls. 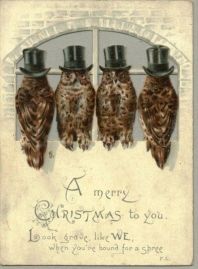 After all, owls don’t go out on the town without their top hats. But they usually act like gentlemen.

Apparently, the 3 Bears snatched her from her bead and are now taking her to a pot to boil alive. That’ll teach the girl not to stage a home invasion. 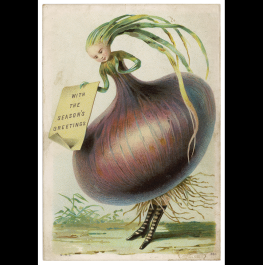 I think it’s supposed to be shaped like a woman with the long hair and root dress. Still, this is pretty messed up.

33. “A Merry Christmas to you” from a couple of clowns.

Here a scary clown shoves a guy into a barrel head first. While the old clown couldn’t bear to watch. I don’t want to know what happens next.

Yet, the guy seems rather pissed off on how the cats’ singing is disrupting his sleep. One of them seems to sing, “Memory, all alone in the moonlight…”

35. “To wish you the compliments of the season.”

Now watch this spider eat the fly trapped in its web. Since when does stuff like this belong on a Christmas card?

36. “Let not roast beef be carelessly passed by/At Christmas hold him in esteem most high.”

I’ve heard about beefy men before. But this just takes it to the utter extreme. Woman doesn’t seem to mind that his head is literally on a platter.

37. “With the compliments to the season” by a cat and owl. 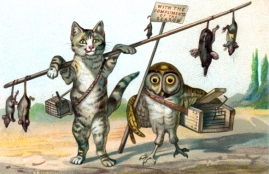 Seems like the cat and owl got a good catch of mice with dandy traps. And no, I really don’t want to try one.

38. Christmas is a time when birds come to greet each other in the snow.

Funny, how one’s wearing a top hat and is smoking a cigar. While another has a winter hat on.

39. This rabbit is pulling for a merry Christmas. 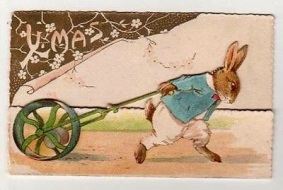 Now I can understand this for an Easter card. But Christmas, seriously? That doesn’t make sense.

Since nothing should evoke Christmas like junk photo. Actually, what does China have to do with Christmas?

41. “A Merry Christmas to you” from the meadow.

Okay, this make a great Easter card since it includes lambs and evokes spring. But a Christmas card, are you fucking kidding me?

42. These rays come in with the catch of the day.

So what do stingray fishermen have anything to do with Christmas? Seriously, I have no idea why they’re featured on a card like this.

43. Everyone enjoys a good sleigh ride now and then.

Yet, it’s pulled by a pig whose shit can reek the whole neighborhood. Though the two ladies also enjoy a bottle of booze for extra merriment.

Yes, that’s coming from a talking goat while the boy’s just shocked out of his mind. Then again, the goat might want him to share some of his snack. Also, what does this have to do with Christmas?

Here they come with the roast, pudding, and drinks. Oh, you’re freaked out. Well, try tipping them if you don’t want them to haunt your dreams. 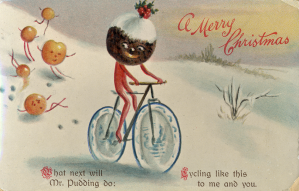 Wonder what he did to piss off the fruit chasing him. The world will never know. But he’s terrifying nonetheless.

47. “May Christmas bring you many pleasures.”

Though these kids bring a wreath and flowers as a way to be nice. Before they kill you in your sleep for giggles. Yes, they are that evil.

Actually, this would’ve been okay as a Christmas card. Save for the caption. And how the bird inquisitively looks at the tin soldier in the snow. 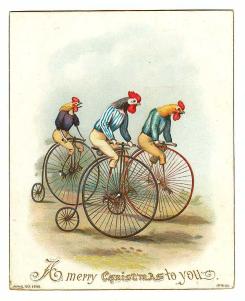 Apparently, they prefer the big wheel variety. While they seem to have their wings tucked in their shirts. 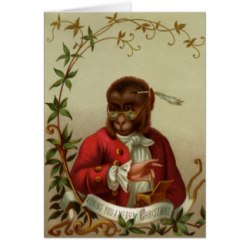 Well, this isn’t too bad. Assuming if we lived in a Planet of the Apes universe. Also, he has human hands which is weird.

3 responses to “We Wish You a Merry Christmas, on Vintage Christmas Cards (Fifth Edition)”