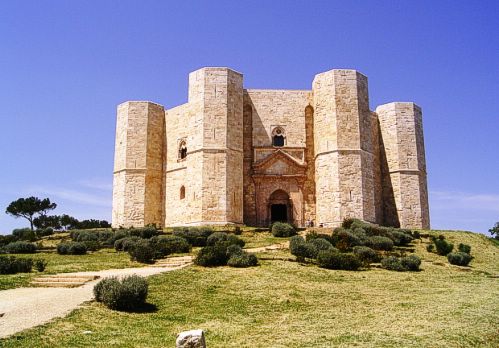 Italy’s Castel del Monte was built in the 1240s by Holy Roman Emperor Frederick II. You may not know it, but it originally had a curtain wall. Yet, it’s a unique enough castle to be recognized as a UNESCO World Heritage Site.

Finally, we get to the castle architecture. Over the 900 some years castles were built during the Middle Ages, they took on many forms with many different features. Most castles were made from wood since it was cheap, readily available, and an easy building material. However, a wooden castle was totally helpless against flaming arrows because we all know how wood catches fire, breaks, and decays over time. However, if a noble could afford it, he’d have his castle constructed from stone despite the high expense and maintenance. But stone was significantly less flammable and breakable with siege weapons and the elements. Early castles mostly consisted of simple fortifications and design. But as the medieval period went on, they became more complex with more towers, stronger gatehouses, and sturdier walls. 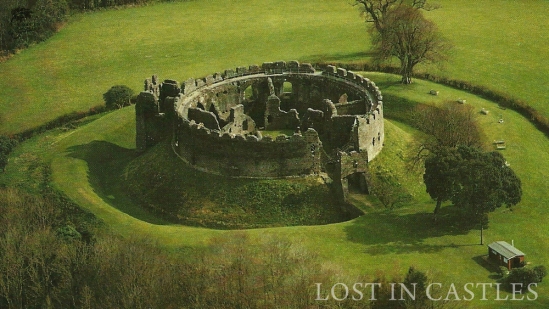 Restormel Castle in England is an example of a shell keep which was a circular stone keep, are type of castle design. Though once a luxurious residence of the Duke of Cornwall, it was in ruins by the 16th century.

Adulterine Castle- a castle built without a liege lord’s or king’s approval.

Concentric Castle- a castle with 2 or more concentric curtain walls, such that the inner curtain wall is higher than the outer and can be defended from it. Often had round towers.

Courtyard Castle- a castle type consisting of a stone curtain wall surrounding a courtyard with buildings built inside it, normally against the curtain wall.

Knight’s Castle- a castle owned by a knight.

Motte and Bailey- an early form of castle where a large mound of dirt was built up. A wooden fortification was placed on top, which were shaped like a timber fence forming a circle like a crown.

Rectangular Keep- a stone castle with a square or rectangular keep with a second-floor entrance. The castle on Monty Python and the Holy Grail is a classic example.
Shell-Keep- castle style consisting of a circular or oval wall surrounding its inner portion. Usually stores and accommodates wooden buildings inside the hollow walls.

Stone Keep Castle- the classic medieval castle with a stone keep and a thick stone wall, which can be rectangular or circular in shape.

Tower House- a small castle consisting mainly or entirely of a single tower. 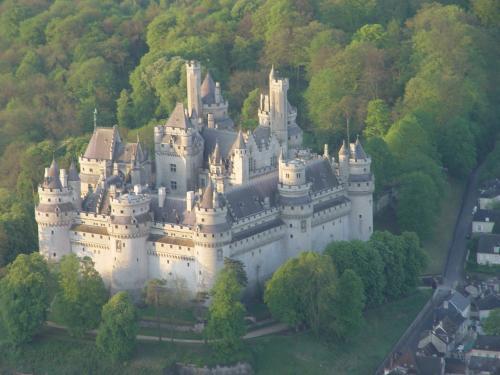 Built in the 12th century, the Château de Pierrefonds almost seems straight out of a fairy tale. Despite its 19th century restoration, it retains most of its defensive military architecture.

Aisle- space between an arcade and outer wall.

Ambulatory- aisle around an apse.

Apse- a circular or polygonal end of a tower or chapel.

Balustrade- a railing, as along a path or stairway.

Barrel Vault- a cylindrical roof of stone or wood.

Base Cruck- a form of wood framed construction where the roof is supported by curved logs rising from the walls and not by aisle posts set on floor.

Blind Arcade- a line of arches on the face of a solid wall for decoration.

Boss or Keystone- a central stone in an arch or vault.

Bressumer- a beam to support a projection.

Cap House- a small chamber at the top of a spiral staircase in a tower or turret, leading to an open wall walk on the roof.

Cavalier- a raised structure containing a battery, usually sited above a bastion’s center to give better trajectory.

Cesspit- a wall opening where waste from one or more toilets were collected.

Course- a level layer of stones or bricks.

Crow or Corbie Steps- a step-gabled end to a roof.

Diaphragm- a wall running up to the roof ridge.

Dog Leg- a right angle in a passageway.

Dormer- a vertically placed window in a sloping roof. Like you see on the top floors of a Cape Cod house.

Entresol or Mezzanine- a low story between 2 high ones.

Fireplace- a walled hearth used for heating a room. Most castles in the later Middle Ages had one in almost every room once they took off.

Gable- a wall covering the end of a roof ridge.

Garret- a building’s top story within a roof.

Groined- a roof with sharp edges at intersection of cross vaults.

Groin- junction of 2 curved surfaces in a vault.

Jambs- side posts of an arch, door, or window.

Lancet- a long, narrow window with a pointed head.

Label- a projecting weather molding above a roof or window to deflect rainwater.

Lantern- a small structure with open or window sides on top of a roof or dome to let light or air into the enclosed space below.

Lattice- Lines crossing to form a network whether on a window, fence, or gate.

Lintel- a horizontal stone or beam bridging an opening.

Loggia- a covered arcade or colonnade.

Louvre- a potter vent allowing smoke to escape from the hearth.

Meurtriere- an opening in the roof of a passage where soldiers could shoot into the room below.

Mullion- a vertical division of a window that’s constructed in panels.

Nookshaft- a shaft set in a jamb or pier angle.

Pediment- a low-pitched gable over porticos, doors, and windows.

Pilaster- a shallow pier used to buttress a wall.

Piscina- a hand basin with a drain, usually set against or into a wall.

Pointed Arch- a sturdy arch that distributed the force of heavier ceilings and bulky wall. Can support much more weight than previous, simply, spindly pillars.

Rear Arch- an arch on a wall’s inner side.

Relieving Arch- an arch built up in a wall to relieve thrust on another opening.

Soffit- an underside of an arch, hung parapet, or opening.

Spur- a triangular buttress used to strengthen a round tower’s bottom.

Spiral Staircase, Corkscrew, or Turnpike- a winding, circular staircase spiraling up clockwise which allowed added sword room for defenders. Steps were built unevenly to make it difficult for attackers to climb and fight. Said to be among the most economical and convenient method of accessing upper tower floors and easier to defend.

Squint- an observation hole in wall or room.

Traverse- a small bank or wall cutting across a covered way’s line.

Tympanum- a space between a lintel and arch over a doorway.

Vaulted Ceiling- a ceiling with sturdy pointed archers and pillars that allowed ceilings to be taller than ever before. Also provided an impression of height, grandeur, and elegance. Can be built in a variety of different shapes and sizes.