During the Easter season, you might see a lot of these Easter greeting cards. Many of them depict beautiful imagery like you see above. Some of them might have cute bunnies and chicks. Some may have colored eggs and Easter baskets. Yet, while sending Easter greeting cards isn’t very common nowadays, people would send these back in the day. But while some of these may evoke warm feelings of nostalgia, some might make you scratch your head in confusion. Or inspire laughter. Since I started doing posts on vintage Easter cards, I’ve found plenty, especially if they pertain to anthropomorphic critters like rabbits and chicks. This time is no different. So for your reading pleasure, I give you another treasury of crazy vintage Easter cards that time forgot. 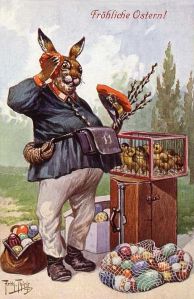 Here he has some eggs in bags and nets and chicks in a cage. Whew, selling this stuff must be a lot of work.

2. Gather round to hear some homeless bunny street musicians.

While it may look cute, you have to wonder about the laws of physics in this one. Because I’m not sure if an eggshell has any wind resistance.

4. Sometimes you have to lounge around in a giant eggshell.

Because walking your rabbits is always exhausting. Oh, that’s supposed to be a wagon?

5. Hope you can make yourselves at home at a giant egg house. 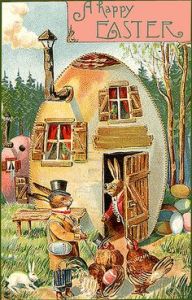 Apparently, they come from a world with two kinds of rabbits. Ones that wear clothes and walk on hind legs. And ones that don’t. Also, the chicken couple doesn’t seem to mind that the a sentient rabbit is hoarding eggs.

6. Nothing says Easter like a naked child on top a lamb. 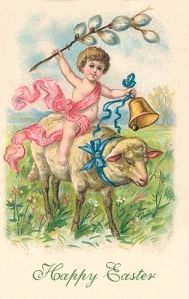 However, the sheep doesn’t seem thrilled with the kid riding on it and incessantly ringing the bell. Yes, that can be annoying.

7. Easter greetings from the chick hikers. 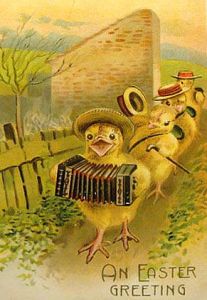 However, Jerry wasn’t pleased with Stanley’s habit of singing and playing accordion music. If Stan didn’t stop, Jerry swore to God he’d whack him with his cane.

While the Easter Bunny fills Easter baskets once a year, he mostly works as a waiter. And he mostly gets by on tips.

9. Be careful holding Easter eggs on your dress. 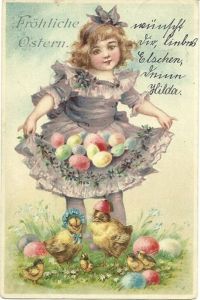 Because the mama and daddy chicks are out for blood. Wait, chicks have chicks? This is messed up.

And there you see the chicks looking by as the rabbit vender sells their fellow brethren to children. And they can’t do anything about it. 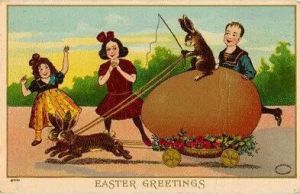 Funny, how the bunny’s driving two other bunnies to run the chariot. Not sure how that works.

12. Since Easter opens spring, love is in the air. 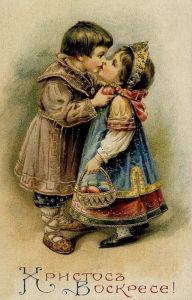 Though I’m not sure if this boy knows anything about consent. Because I don’t think the girl asked for it. Boy, sexual misconduct starts young.

13. Someone seems reluctant to get out of her shell. 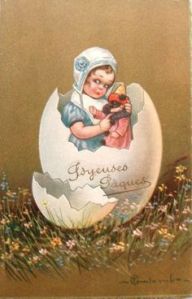 Though she appears annoyed, it’s her doll that terrifies me. Yeah, that thing freaks me out.

14. Of course, you need egg lamps for the Easter parade.

Didn’t know that Easter eggs could light up like that. Yet, that doesn’t explain why they’re not wearing pants. 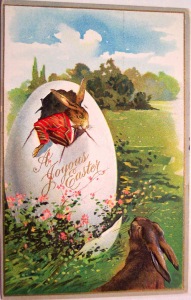 Yet, he’s greeted by a bunny with no clothes on. And the eggshell has a few cracks.

16. This chick has some eggs to sell in his basket.

Yes, this is a chick selling Easter eggs. Not sure how to explain that. And he’s even smoking a pipe.

So this trolley is filled with chicks and chickens. And yet, the chicks are seen as adults. Not sure why.

Seems like the mother bunny’s come back with a load of eggs. And she’s showing her daughter the ropes.

Well, at least the rabbit is a gentleman. While the chick band plays in the background.

20. These 3 bunnies await for a steamship to come by the docks. 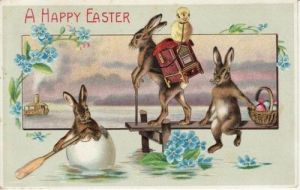 One bunny is using a chick for his portable organ. Like an organ grinder uses a monkey. 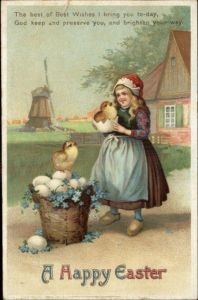 Yet, this girl is like, “I’ll hug em’ and squeeze em’ and keep em’ for ever and ever.” Yeah, that chick’s not set for a happy life.

22. Hop aboard the mighty SS Eggshell.

It’s an eggshell wooden ship with sails and flowers. But it’s all manned by chicks.

23. Chicks always love to fly on an Easter basket airship.

It even has Easter egg sand bags. But let’s hope no beak goes near the blimp.

24. Easter greetings from the chicks on a jeep. 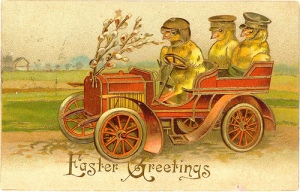 Okay, it’s an old fashioned car. And the chicks are in military hats. But you have to like the pussy willow hood ornament.

25. In America, Easter chicks always hop off the blimp with a ladder.

Yes, I know it’s kind of crazy. But at least they’re not putting their beaks at the canvas.

26. Nothing impresses like pulling a rabbit out of their hat. 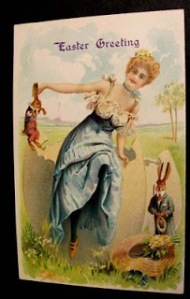 Yet, the bunny doesn’t seem impressed. Hope that woman stops gloating because she might be in a world of pain.

This is kind of like a version of the bunny egg chariot. But the naked children pulling the egg cart don’t seem to mind.

Luckily the rooster got his family behind the giant Easter egg. Still, if the kids piss him off, they will soon regret it. Because roosters will attack.

29. I guess nobody wants to share a small egg home with a sheep.

Don’t look now. But I think that sheep just mauled the little kid. Yes, this home isn’t big enough for the both of them.

30. Let’s stop by to the hen with the Easter eggs. 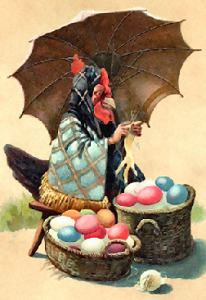 Tragically, she’s so poor that she’ll have to sell some of her own children. What a shame.

31. Sometimes the Easter Bunny may toss an egg to a child.

Let’s hope that egg doesn’t break. Or else the girl gets egg all over her face.

32. A white rabbit is always a stunning Easter sight.

Yet, a white rabbit with red eyes has a certain creepiness to it. And this one seems like it’s up to something.

33. This chick and rabbit sit on a bench on a lazy afternoon.

The chick has a basket of eggs. Yet, the chick and bunny seems kind of messed up to me.

She keeps them in the cage she’s sitting on along with a couple of chicks. Oh, and she’s wearing a fur stole while holding one.

35. “May Easter now and ever be,/A source for pleasure pure for thee.”

Yes, I know the rabbit’s talking from the egg. But it’s the little girl who creeps me out.

36. It’s well known that the Easter Bunny often stages a raid at a chicken coop.

Yet, while dismayed, the hen gives up without a fight. The rabbits are stunned.

How these rabbits can climb up the bikes, I have now idea. Yet they somehow do while carrying bindle sticks.

38. Somehow this chick’s terrified of taking a swim. 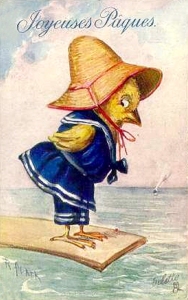 Considering what swimsuit she’s wearing, I wouldn’t blame her. Those kinds of swimsuits were impractical anyway.

39. It’s always best to practice singing early in the morning.

But standing on an egg? Not the brightest idea. Though I do like how the conductor is in his robe and pajamas.

40. While on a boat ride, a guitar always comes handy.

Yet, it seems that no one wants to hear Old Cheepy play “Oh, Susannah” for the 100th time. How annoying.

41. Apparently, Johnny likes to balance a chicken and eggs on his head. 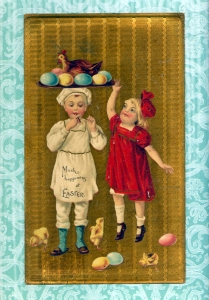 There are so many ways this can go wrong. Also, that girl looks a bit weird.

And I see the kids and the rabbit are at the haggling stage. Don’t really want to know how this goes.

43. It takes a bell to teach bunnies how to sing.

A bell conducting bunnies during a recital? Sounds like this card was envisioned during a absinthe binge.

Well, if you were minding your business while being intruded by a creepy guy with a hammer and chisel, you’d feel the same way. That guy is terrifying.

45. Happy Easter from a couple of egg people.

Yes, I know these two seem like they’re straight from a drunken haze. Because I don’t know how else to explain it.

46. Speaking of egg people, here’s a couple walking their bee.

Yes, this is an egg couple walking their bee. Can’t believe I just said that.

47. Occasionally, a rooster might upset the eggs from the basket. 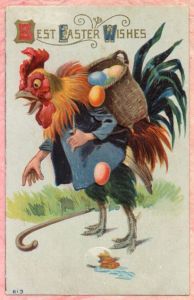 Not sure what I find a bit freakish about this. The large rooster screaming over eggs about to break? Or its human hands?

Though these bunnies are stacked on each other, one is worried how their tower will hold. Let’s hope it doesn’t fall.

49. These bush bunnies wish you a happy Easter. 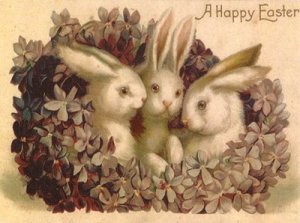 However, these rabbits seem like they’re planning to kill someone than give eggs to children. Avoid them like the plague.

50. This bunny band always plays on the eggs.

One’s even playing on eggs with music on it. Yet, let’s hope they’re careful for eggs aren’t the most durable things.