You may notice that I put a lot of reality dating shows in this series. Well, it turns out that a lot of dating shows can be particularly downright horrible for several reasons. For one, a lot of them tend to be built around terrible concepts as you’ve seen in some of the ones involving gays and plus-sized people. Second, many tend to play with people’s emotions as you’ll find out when I get to Tila Tequila, Flavor Flav, and the Bachelor. Sure we’re convinced that what we see on the screen could be real but you can never be sure. And there were even winners known to be upset that their prize to date the center contestant was not to be. Third, some of these shows didn’t use background checks to screen their contestants as you see in Who Wants to Marry a Multi-Millionaire? and Megan Wants a Millionaire. Fourth, a lot of them tend to tag on unrealistic ideas about relationships. And finally, reality dating shows are notorious for being really demeaning toward women. Anyway, here’s another installment of sleazy reality shows that belong in a garbage fire. 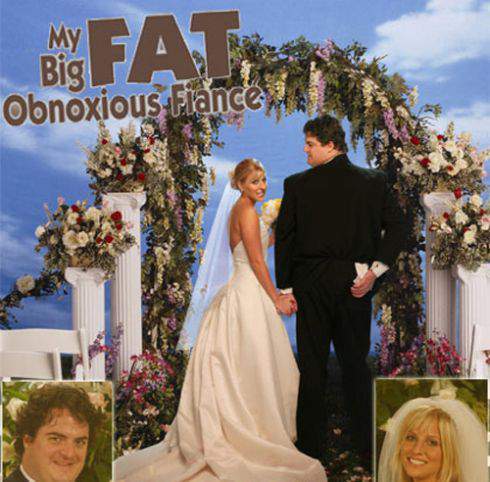 In My Big Fat Obnoxious Fiance, a woman fakes an engagement with a fat jerk in order to get money. And they have to convince her family of their engagement for 12 days. Yes, it’s as bad as you think.

Why It’s Stupid: Attractive blond woman willing to do anything for money? Check. Has a family that would do anything similar? Check. Bad fat guy stereotypes? Check. 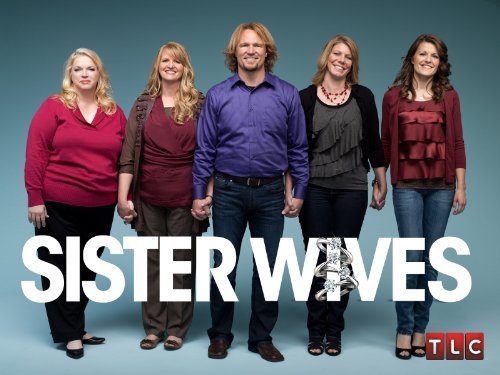 TLC’s Sister Wives is proof that the network would put on any show for ratings. Even if it’s pertains to a practice that’s illegal and would result in prosecution for the participants.

Premise: A show that takes a look at a polygamist and his 4 wives and 18 children.

Why It’s Stupid: The guy and his wives said they participated in the show to make the public more aware of polygamist families and to combat societal prejudices. Yes, this was an attempt to show the human side of what is an illegal and outright creepy practice (and there are very good reasons for it). Also, the series led to the family being investigated for prosecution.

Did it Get Canceled?: Yes, but it ran for 2 years.

I Want a Famous Face depicts people who get plastic surgery in order to look like their favorite celebrities. Yes, you read that right. And yes, this was actually a show. Of course, what these people need is therapy. Still, none of these was Jonathan Brewster who got a famous face anyway since he’d kill if you’d say he looks like Boris Karloff.

Premise: Young people go through plastic surgery with the goal of looking like a famous person. Also features short spots on how plastic surgery can go wrong from people that have experienced poor health resulting from their attempts at plastic surgery.

Why It’s Stupid: Trying to imitates a celebrity’s hair and makeup is one thing. But having a plastic surgery procedure to look like them, now that’s creepy. Even creepier are the spots on plastic surgery. Also, I don’t think Jonathan Brewster would’ve wanted the famous face he got. I mean that guy practically killed a man who said he looked like Boris Karloff.

Did it Get Canceled?: Yes, but it ran 2 seasons. 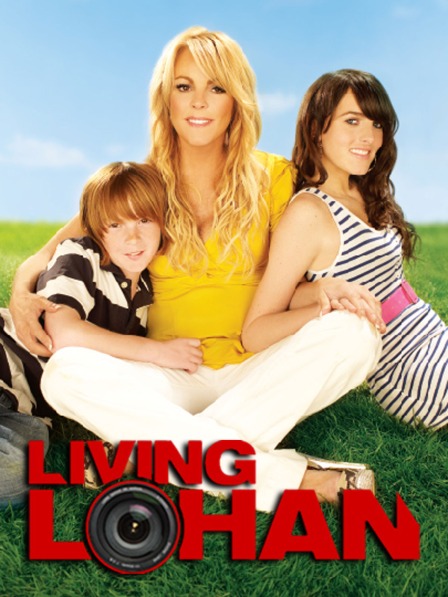 No, Living Lohan doesn’t feature Lindsay, just her folks. However, it does show you why she turned out to be so messed up in the first place. Having a stage mother could do that to you.

Why It’s Stupid: While personally I think reality shows are stupid in general, the fact that Lindsay wasn’t in it kind of makes it worse (she refused to take part in it). I mean, if anyone was interested in watching a show about the Lohans, she should’ve been in it. Then again, the fact her mom Dina being a modern Mama Rose might have something to do with it and maybe Lindsay made the right call. Also Anderson Cooper would say, “I cannot believe I’m wasting a minute of my life watching these horrific people.”

Did it Get Canceled?: Yes, and after one season. 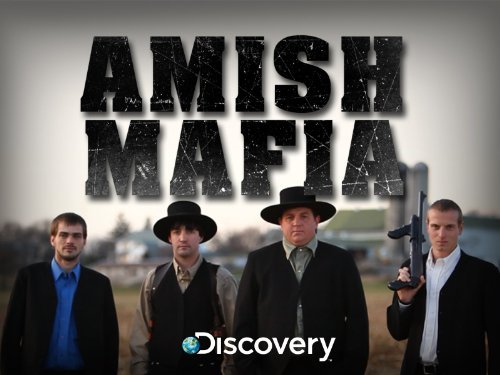 While Discovery Channel tries to depict itself as an educational network, Amish Mafia has no educational value since it’s totally fake. How can I tell? Well, one of the guys is holding a machine gun in the promos, obviously. Also, when a noted professor saw previews for it, he thought it was a skit off SNL.

Why It’s Stupid: Yes, this is a real show, which has been questioned by scholars, local newspapers, and law enforcement, especially when it comes to an unspecified number of “re-enactments.” Also has been subject to accusations being bigoted and defaming Amish people. According to Professor Donald Weaver-Zercher, when he initially saw the trailer from the show, “I thought maybe it was a Saturday Night Live skit on reality television because it was so far-fetched.” He later added, “My sense is this Amish mafia is about as real as the Dunder Mifflin Paper Company in The Office.” Also, there was one scene purported to be shot in Lancaster County but was really shot in Columbia, South Carolina. Not to mention, even the politically corrupt former Governor Tom Corbett called for the show’s cancellation.

Did it Get Canceled?: No, it’s still on, unfortunately.

Sure Baby Borrowers seemed to be a show to prevent teen pregnancy by giving babies to teen couples. However, childcare experts wanted the show removed due to concerns over the emotional health of babies and young children. If I want to see a show on baby borrowers, I’d just watch Raising Arizona.

Premise: Couples between 18 and 20 are lent babies, toddlers, pre-teens, teenagers, and elderly that they have to look after over the course of a month.

Why It’s Stupid: Think of it as a terrible idea to prevent teen pregnancy. The Natural Child Project and the American Academy of Child and Adolescent Psychiatry petitioned to NBC to remove the show over the emotional health of the babies, toddlers, and young children pertaining to attachment and separation anxiety. 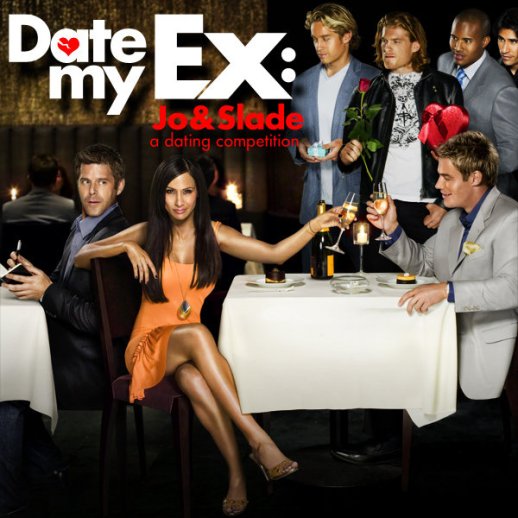 In Date My Ex: Jo & Slade, 3 guys go on a date with Jo while living at Slade’s house. And Slade gets to watch. Yes, it’s as disturbing as you think. These two don’t have a healthy relationship.

Premise: 3 guys are invited to Slade’s house to compete for Jo’s heart. Each day, one of Jo’s friends delivers a red and white polka dot box with a note and a clue hinting at the day’s events. Each of these guys takes Jo out for a unique date but what they don’t know is that Slade is watching their dates. At the end Jo chooses one of the guys in Slade’s house and go on a second date with her while the other guys have to leave.

Why It’s Stupid: Let’s just say having your ex find a new guy for you can be quite awkward. Even creepier that he’s watching the dates. You know what that reminds me of? Uh, something normal guys get restraining orders for. 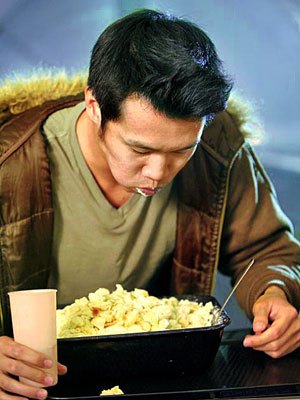 The show Hurl brings you to the world of competitive eating and extreme sports. First one to make it without vomiting wins $10,000. However, watching it will probably make you hurl.

Premise: Amateur competitive eaters force as much food into their stomachs as they possibly can before immediately partaking in extreme sports while trying not to vomit. Prize is $10,000.

Why It’s Stupid: For one, this is gross. Second, I don’t think gorging and partaking in extreme sports is a recipe for better health. I honestly don’t.

Did it Get Canceled?: Let’s hope so. 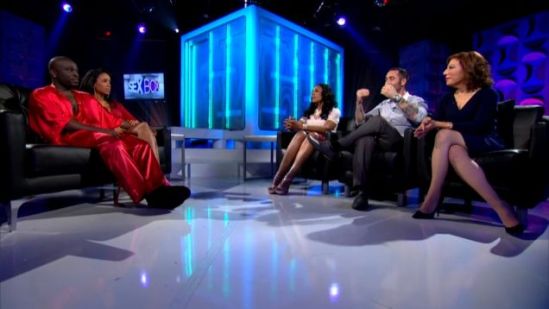 The show Sex Box is kind of self-explanatory. It’s a show where couples have sex in a box. And there’s some sex therapy involved, too. For the love of God, I hope this show got cancelled.

Premise: Several couples are brought into the studio (some with relationship issues), where they enter a sound-proof box where they have sex. During this time the hosts will comment on sex, the couple, and the chances that their relationship will survive. After a certain amount of time, the couple exits the box and rejoins the hosts on stage, where they answer questions about themselves and their sex life, based on the theory that the couple will be more likely to be more open and honest in their answers after having sex.

Why It’s Stupid: Okay, I understand that some couples need help on their sex life. But I think this kind of therapy is going way too far. Seriously, if I needed relationship or sex counseling, I’d just see a therapist.

Did it Get Canceled?: Let’s hope so.

Now seeing celebrities fight for their lives in the jungle might seem like something you’d fantasize about. Until you have a show like this and don’t know any of the celebrities on it.

Premise: 13 celebrities live together a jungle for a few weeks or some months with no luxuries and compete to be crowned king or queen of the jungle.

Why It’s Stupid: Actually I don’t think the premise is stupid at all. I’m sure there are plenty of people who’d want to see celebrities struggle to survive in the wilderness. However, what is stupid about this show is that most of the celebrities in question are has-beens or famous people you tend to forget about after a certain amount of time. If I had any say in this show, it would be to have celebrities viewers would want to see trying to survive in the jungle like Donald Trump, Justin Bieber, Kim Kardashian, Tim Tebow, Jenny McCarthy, and others. Okay, now I feel pretty guilty here. See how reality television can bring out the worst in people?