Relax, Miranda, Prospero doesn’t hate Prince Ferdinand. In fact, he’s perfectly fine with you being with him. After all, getting together with him was his idea but you wouldn’t know it.

While normally considered comedies since they have happy endings, these Late Romances are called us such for 2 reasons. First, they were written after Shakespeare’s prosperous company took over the Blackfriars Theatre in 1608 and began requiring texts different from those he’d been supplying earlier. Second, unlike the previous comedies you’ve read in my earlier posts, these tend to be more wishful, more melancholic, and more atmospheric than that preceded them. After all, the Blackfriars productions were stated at night in a closed, artificially lit environment and cost considerably more money. Not to mention, while the earlier comedies were open to pretty much everyone at the globe, the Blackfriars Theatre usually had a wealthier and better educated audience. And these people expected more emotional, heart-wrenching poetry, extravagant incident, extended suffering, and perilous escapes before the happy ending. Well, the Bard gave them what they wanted with these plays. 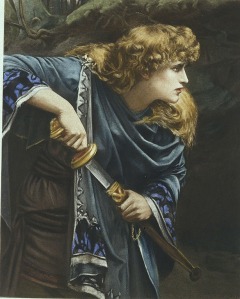 Imogen: “Some jay of Italy,/Whose mother was her painting, hath betray’d him:/Poor I am stale, a garment out of fashion.” – Act III, Scene 4

Plot: Despite the name, Cymbeline is a guy who’s a British king during the Roman Empire. Then again, the play should really be called Imogen since it’s more about his daughter. So Imogen falls in love and elopes with a poor nobleman named Posthumous which infuriates her daddy. So Cymbeline banishes his new son-in-law to Italy where he meets Jachimo who makes a bet that he can seduce Imogen and prove that all women are naturally unfaithful. Jachimo goes to Britain to see if Imogen would want a one night stand. She refuses so he resorts to trickery by hiding in a chest, watching her sleep while collecting details on her room, and stealing a bracelet Posthumous gave her. So when he returns to Italy, Jachimo has Posthumous fall for it hook, line, and sinker. And he tells his servant Pisanio to kill her over her infidelity. Pisanio doesn’t believe any of it and convinces her to disguise herself as a man and find her husband so she could tell him her side of the story. Meanwhile Pisanio tells Posthumous she’s dead. Yet, on her way to Italy, Imogen gets lost in Wales where she meets a nobleman and his two sons who are actually Cymbeline’s sons and her brothers that the nobleman kidnapped in revenge for being exiled. We then find out that Cymbeline’s evil queen convinced him to stop paying tribute to Rome which is about to attack. Due to crazy circumstances pertaining to killing the queen’s son, Imogen believes Posthumous is dead as Posthumous regrets murdering her. She mourns as he tries to kill himself by fighting for the Brits before switching to the Romans though Jupiter ensures he’ll protect the guy. As Posthumous is brought out as prisoner, each of the cast explains what the hell is going on and everyone lives happily ever after except the Queen who dies because she’s a bitch.

Plot Origin: Derived from part of Historia Regum Britanniae of Geoffrey of Monmouth about the real-life British monarch Cunobeline.

Who Falls In Love: Imogen and Posthumous

Who Dies: Well, the Queen and her son die but it’s not much of a tragedy.

Reputation: It was once held in high regard though not so in the 18th century since it’s kind of mishmash of plots Shakespeare used in other plays. John Keats liked it though and Harold Bloom thinks it’s more of a parody of the Bard’s own content. Made into a film in 2015.

Pericles: “I see that Time’s the king of men,/For he’s their parent, and he is their grave,/And gives them what he will, not what they crave.” -Act II, Scene 3

Plot: A frame story narrated by Gower, Pericles is a virtuous adventurer who encounters many hardships on his road to happiness. Instances include getting in trouble for uncovering an incestuous relationship between a king and his daughter as well as sailing around the world to avoid assassination attempts. During his travels, he meets and marries another princess Thaisia. But on their way home she dies in as storm during childbirth that Pericles dumps her body at sea in a coffin. However, Thaisia actually survives and fearing her husband and newborn daughter are dead, she becomes a priestess in the Temple of Diana. Fearing that his daughter Marina will die before they get home, he leaves her with a family in Tarsus. Years pass and Pericles decides to retrieve her which is great because the governor and his wife in Tarsus aren’t so pleased with her being hotter than their daughter. They plan to kill her but she’s kidnapped by pirates and sold into slavery but miraculously never gets raped. She even convinces her kidnappers to leave and seek meaning in their lives as well as finds a job as a musician. But when Pericles gets to Tarsus, he’s told that his daughter is dead but luckily he finds her in Mytilene and thanks to the goddess Diana, he eventually finds his wife, too.

Plot Origin: Based on the medieval romance Apollonius of Tyre.

Who Falls In Love: Pericles with Thaisia.

Who Dies: No one we know on stage.

Reputation: Critical response of this play hasn’t been warm and ranks among one of the Bard’s least-known and least liked plays. However, it has seen a revival since 1929. Then this is Shakespeare we’re talking about so even crap like this has to be of superior literary quality. 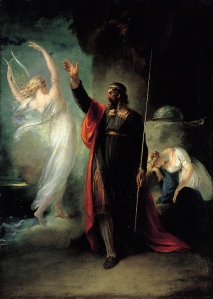 Prospero: “Know thus far forth:/By accident most strange, bountiful Fortune —/Now my dear lady — hath mine enemies/Brought to this shore; and by my prescience/I find my zenith doth depend upon/A most auspicious star, whose influence/If now I court not, but omit, my fortunes/Will ever after droop.” – Act I, Scene 2

Plot: Former Duke of Milan Prospero is a powerful sorcerer on an almost deserted island where he’s lived since he’s been usurped by his brother Antonio. And he rules over the island with only 2 other human beings at his command: an air spirit Ariel whom Prospero rescued from being trapped in a tree but would rather be free from service soon and the deformed son of a witch Caliban who tried to rape Miranda. When Antonio is sailing with a group that includes the King of Naples, Prospero has Ariel create a storm to shipwreck them on his island so he could have his revenge. Luckily, Miranda and Ferdinand fall in love and Prospero ends up forgiving those who wronged him. Ariel is set free and almost everyone gets off the island.

Plot Origin: It’s unknown where Shakespeare got this story from and may have been original. Well, it was partly inspired by a shipwreck in Bermuda.

Who Falls In Love: Prince Ferdinand with Miranda. However, Miranda falling in love with him at first sight is understandable since she’s lived a very sheltered life with very little human contact. Nevertheless, while Prospero pretends to hate her being with Ferdinand, he’s actually totally cool with it. In fact, it was his idea that they’d get together in the first place.

Who Dies: No one, but maybe some sailors.

Reputation: It’s said to be the last play Shakespeare ever wrote alone and considered one of his finest even to this day. However, there have been adaptations performed from the English Restoration to the mid 19th century. Though Ariel is a guy in the play, he’s sometimes played as a woman since most of the cast is male. There’s also a tradition of having Caliban played by a black guy which is kind of racist and disturbing. Is frequently performed and has been adapted to screen several times.

Emilia: ” It is the very emblem of a maid./For when the west wind courts her gently/How modestly she blows, and paints the sun/With her chaste blushes! When the north comes near her,/Rude and impatient, then, like chastity,/She locks her beauties in her bud again,/And leaves him to base briars.” -Act II, Scene 1

Plot: Two cousins Palamon and Arcite are captured as POWS in war. While in jail, they both fall madly in love with the fair which really drives a wedge between these almost inseparable buds. Then Theseus lets Arcite go while Palamon remains prisoner. But the jailer’s daughter has fallen for Palamon but lets him go, hoping that he’ll reciprocate. But he ignores her because he’s still obsessed with Emilia. He meets Arcite in the forest and the two decide to have a fair fight over Emilia. The jailer’s daughter meanwhile has gone mad and goes into the forest where she meets some Morris dancers as well as Theseus and Hippolyta hunting. When Theseus sees Arcite and Palamon fighting, he orders them arrested and executed. Hippolyta and Emilia intervene so Theseus decides to hold a tournament between them for Emilia’s hand with each warrior being allowed 3 companions to assist them and be executed if their champion loses. Arcite wins but falls off his horse and dies so Palamon gets Emilia.

Plot Origin: Derived from “The Knight’s Tale” in Geoffrey Chaucer’s The Canterbury Tales.

Who Dies: Arcite falls off his horse.

Reputation: This play doesn’t have a lot of performances and it remains rather obscure to say the least. However, it was once referenced on The Simpsons.

Autolycus: “No, good sweet sir; no, I beseech you, sir: I have a kinsman not past three quarters of a mile hence, unto whom I was going; I shall there have money, or any thing I want: offer me no money, I pray you; that kills my heart.” – Act IV, Scene 3

Plot: King Leontes of Sicilia unreasonably suspects that his wife Hermione got knocked up by his best friend. So when Perdita is born, he views her as a bastard and orders his manservant Antigonus to abandon her despite Hermione’s pleading. After his son and wife both die, Leontes realizes he’s made a mistake decides to grieve for his family for the rest of his life. Meanwhile Antigonus complains about how his job sucks as he leaves Perdita in a Bohemian forest before he exits pursued by a bear. She’s found by shepherd and his son and they care for her. 16 years later, King Polixenes of Bohemia isn’t pleased that his son Forizel has fallen for Perdita so he decides to spy on the shepherds at a sheep shearing festival. Florizel and Perdita flee to Sicilia pursued by everyone. There Perdita’s heritage is revealed as she reunites with Leontes as a statue of Hermione comes to life (but her big brother Mamillius doesn’t and gets screwed). But everything gets straightened up so no worries. Sort of.

Plot Origin: Based on Robert Greene’s pastoral romance Pandosto, published in 1588. By the way, Bohemia is in the modern Czech Republic and has no coastline. Not that Will cared.

Who Falls In Love: Leontes of Sicilia with Hermione but it ends up badly (though it gets better) Palina with Camillo, and Florizel with Perdita.

Who Dies: Mamillius dies due to being separated from his mom, Hermione dies (but she gets better), and Antigonus exits pursued by a bear.

Reputation: This play has only been intermittently popular throughout the years and it hasn’t been performed in its entirety until the second half of the 20th century but to varying degrees of success. The first part tends to play like a tragedy but the second part plays more like a pastoral comedy. Unfortunately, the name Hermione has a different association in modern literature these days like Harry Potter. Then again, the original Hermione was the daughter of Helen of Troy. Made into a 1967 movie starring Laurence Harvey.