For a long time in Panem, it was supposed that victors of the Hunger Games would never have to go back into the arena again. Katniss thought the same even though the idea of mentoring tributes for the rest of your life isn’t great either. And then there’s the Quarter Quell which takes place every 25 years which is a special  Hunger Games featuring a unique twist to the rules. These were said to be supposedly prescribed at the end of the Dark Days to serve as a reminder of some aspect of the first rebellion. One Quell could have tributes chosen by popular vote from the districts. Another could have twice as many tributes reaped from each district as usual (which was the year Haymitch won his Games, by the way). But who the hell knows what inspires the rule changes anyway? The Capitol could’ve just made such stuff up. Nevertheless, unfortunately for Katniss, the third Quarter Quell rule just happened to state that the tributes of each district that year would be selected among the 59 surviving victors. And Katniss just happened to be the only female victor from District 12, which means she’ll have to go back automatically. You know what that means. 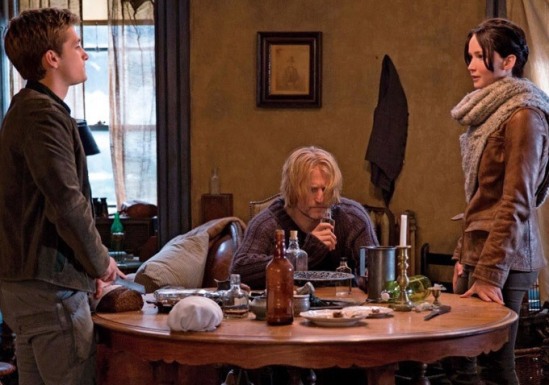 For the song expressing Katniss’s reaction to the news, I decided to go with “Damned for All Time/Blood Money” from Jesus Christ Superstar. The original version depicts Judas Iscariot going to the chief priests and making a deal that he’d rat Jesus out for 30 pieces of silver. For the Hunger Games version, I decided to go with Katniss running to Haymitch’s place after hearing the news of the Quarter Quell rule change as well as the two along with Peeta trying to decide what to do about it. Now I know a scene like this isn’t 100% to the books or the movies, but I hope it just captures the idea.

I weighed the whole thing up before I came to you

I really think that Snow really wants me dead

I really thought that I wouldn’t be in arena again

Damned for all time

I came because I need to get a freaking drink

And what about Peeta will he go there, too?

I thought my biggest worry was just saying “I do”

Despite the Capitol is making all the plans

Damned for all time

Haymitch, you’re a friend a worldly man and wise

Peeta, my friend I know you sympathize

Why is this year victors? Why are we the ones?

Who have to kill those who’ve previously won

I think I might just have to write my will

Cause I think my survival odds are down the till

Let’s see some victors we’re up against

Haymitch: You’re a hunter but your people skills are appalling

We know public relations – you know the bow

Peeta: I’ll volunteer as a tribute if you are selected

Haymitch: Let me handle the victors-I know them well

Not sure if I can kill my friends in the arena

Peeta: But with our charm and connections

Haymitch: Then we can’t fail

Katniss: What the hell are you saying?

Peeta: But it’s just too late now that you’re going back

Haymitch: Now we need to think about our strategy

I think Peeta has a very good point

We need to do training and we should get started

Say nothing, say nothing more

Katniss: I don’t know if I can’t sleep soundly on this night