Katniss and Peeta’s win at the Hunger Games made them instant celebrities as star-crossed lovers who’d rather die than be forced to kill each other. However, not everyone is happy about it, particularly Panem’s resident dictator President Coriolanus Snow. Unlike many people in the Capitol, Snow knows that Katniss was faking her romance for Peeta for the cameras and saw her idea of a nightlock suicide pact as an act of rebellion against the Capitol. And it doesn’t help that her actions inspired rebellions in several of the districts which leads Snow to determine that Katniss is trouble. So how does he deal with it? Well, for one, he has Seneca Crane put to death for letting both Katniss and Peeta win. Next, in the beginning of Catching Fire, he pays a visit to Katniss’s house in the Victor Village, tells her of the situation, and threatens to harm her loved ones if she doesn’t help defuse the arrest by agreeing to keep up her fake romance with Peeta. She agrees and so does Peeta when she tells him about it so they keep up the ruse. However, as public wedding plans and the Victory Tour are underway, Katniss inadvertently fuels the rebellion in every district she goes with her mockingjay pin becoming its symbol. You can surmise that the growing rebellion is now out of Katniss’s control and that her efforts to defuse it are doomed to fail. Now Snow also has a problem on his hands with Katniss because he can’t just have her executed because her Hunger Games victor status would make her a martyr. Nor could he really have her alive. Fortunately, for him, the the third Quarter Quell is around the corner and Katniss is District 12’s only female victor so…. 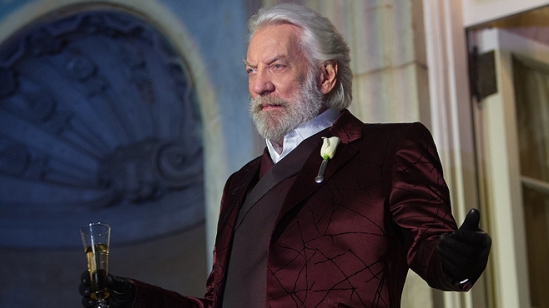 For a good parody on Snow’s deciding that Katniss must be eliminated, I went with the song, “This Jesus Must Die” from Jesus Christ Superstar. In the original version, the Jewish chief priests at the Temple of Jerusalem are worried about Jesus’s popularity among his followers in the city. To them, Jesus was a rabble rouser who needed to be stopped who not only hurts their influence but if he or his followers lead or inspire some insurrection. And historically, they had reason to worry about Jewish insurrections because the chief priests only existed at the mercy of the Roman Empire and they knew it. One major Jewish insurrection and the Sadducees would be history. This was exactly what happened in 70 A.D. when the Temple was destroyed, but Jesus was already risen by then so he had very little to do with it. In the Hunger Games version, I have Snow and his advisers discussing what to do with Katniss Everdeen who’s inspiring rebellions all over Panem. And yes, Snow knows she must be eliminated, but he doesn’t know how to do so at this point.

“This Katniss Must Die”

Peacekeeper: Good President, the city waits for you
The Capitol and Peacekeepers are here for you

Snow: Ah, all of you, you know why we are here
We’ve not much time and quite a problem here

Antonius: Listen to that howling mob of blockheads in the street!
A signal with her fingers and District 11’s on its feet

Crowd on screen: Mockingjay Superstar
Tell us that you’re who we say you are

Egeria: The victors are in on tour right now to whip us some support

Lucia: A rabble rousing mission that I think we must abort

Lucia: Quick, President, go take her off at once

Snow: No, wait – we need a more permanent solution to our problem

Antonius: What then to do about Katniss Everdeen
Girl’s who’s on fire, hero of fools?

Snow: One thing I’ll say for her: Katniss is cool

Antonius: We dare not leave her to her own devices

Her half-witted fans will get out of control

Lucia: But how can we stop her? Her glamour increases
By leaps every minute; she’s top of the poll

Snow: Our elimination because of one girl

Lucia: What then to do about this Katnissmania?

Antonius: How do we deal with the coal miner’s kid?

Lucia: Where do we start with a girl who’s on fire
Or her star-crossed lover the boy with the bread?

All: Must die, must die, this Katniss must die

Snow: So like Crane before her, this Katniss must die