Now we’re halfway through. So while my previous posts focused on science and technology, in this installment, we move away from that. Rather, in this edition we’ll focus more on the social development in our history. In many ways, our society is always changing even if it can be hard for some people and institutions to accept it. For instance, in 2007, many people thought that Americans would never elect a black guy as their president. Given that African Americans were treated as slaves and second class citizens who were segregated to the crap parts of town. And the enduring racism in this country that’s embedded in the American culture. But in 2008, that’s exactly what happened with the election of Barack Obama. Another thing Americans didn’t imagine in 2007 was the nationwide legalization of gay marriage. The Republican dominated Supreme Court did just that 8 years later and there was much rejoicing. Nevertheless, gay marriage has become substantially less controversial in recent years and it’s a relatively easy issue to get behind. Then you have travel which pertains to places that some thought were of little tourist value like the Grand Canyon and the Effiel Tower. Finally, we have business and economics which people tend to get the wrong idea about that it’s often been politicized. Seriously, back in August of 2014, I wrote a blog post on the Federal Reserve to explain why Ron Paul’s call to “End the Fed” was an incredibly stupid idea. So without further adieu, here is my next installment of Beyond Future Imperfect for your reading pleasure. 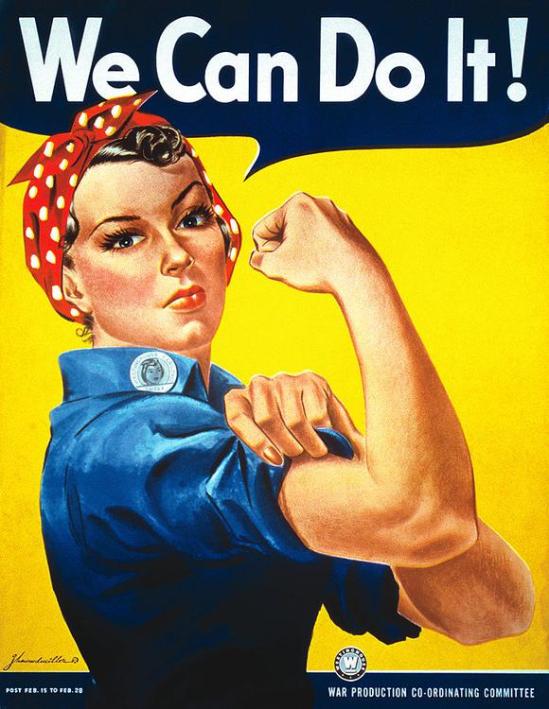 Yes, I’m sure women have been traditionally seen as housewives and stay-at-home moms. But I’m positive that women have made plenty of contributions outside the home, since, well, ever. Nevertheless, at least feminism helped make that much more acceptable by the 1970s. Still, look at this WWII poster for yourselves. Doesn’t look like a housewife to me.

“I see no good reasons why the views given in this volume should shock the religious sensibilities of anyone.” — Charles Darwin, The Origin Of Species, 1869. (Well, he wasn’t totally wrong as I do believe God did play a role in the evolution of life through the process of natural selection, which was probably His divine intention anyway. Besides, there’s the story of Jacob breeding goats so he could trick his father-in-law into giving him the greater share of the flock. Not to mention, Christians have long considered the Genesis creation story as an allegory long before Darwin even developed his theory of evolution. For instance, Saint Augustine believed that everything was created by God in the same instant and not in 6 days as Genesis would require. Also, there’s the fact that many people lived on farms at the time who are familiar breeding livestock and crops. However, Darwin wasn’t counting the notion of Biblical literalists who believe in the Young Earth Creationism.)

“If anything remains more or less unchanged, it will be the role of women.” –David Riesman, conservative American social scientist, 1967. (Well, as far as sexual reproduction is concerned. Other than that…women’s roles will certainly change and be beyond the role of housewife.)

“The multitude of books is a great evil. There is no limit to this fever for writing; every one must be an author; some out of vanity, to acquire celebrity and raise up a name, others for the sake of mere gain.”–Martin Luther, German Reformation leader, Table Talk, 1530s(?). (Sorry, Martin Luther, but books are a great good. And no, not everyone writes to become a celebrity.)

“Not one man I have spoken to likes a woman in mini skirts.” – Coco Chanel, 1969. (Coco has obviously not been around the right kind of men. Of course, men like women in miniskirts. Well, a lot of them anyway.)

“Visionaries see a future of telecommuting workers, interactive libraries and multimedia classrooms. They speak of electronic town meetings and virtual communities. Commerce and business will shift from offices and malls to networks and modems. And the freedom of digital networks will make government more democratic. Baloney.”– Clifford Stoll in “Newsweek”, 1995. (This is happening now as we speak.)

“Assuming then my postulata as granted, I say, that the power of population is indefinitely greater than the power in the earth to produce subsistence for man. Population, when unchecked, increases in a geometrical ratio.” – Thomas Malthus, who, in 1798, argued that population growth would outpace agricultural production. (Today we have agricultural industrial complex which can feed way more people than whatever Malthus’s world had in the 1790s.)

Travel? Nobody’s Going to See That

Yeah, I’m sure this majestic natural wonder is certainly a “profitless locality.” Never mind that it’s the #1 reason why people flock from all over the world to visit Arizona. Why the hell is it called “The Grand Canyon State” then?

“Ours has been the first, and doubtless to be the last, to visit this profitless locality.” — Lt. Joseph Ives, after visiting the Grand Canyon in 1861. (Too bad this guy knew nothing about tourism. Today, the Grand Canyon is the #1 tourist destination in Arizona as well as a national icon for the state. Hell, they don’t call Arizona, “the Grand Canyon” state for nothing.)

“We, writers, painters, sculptors, architects and passionate devotees of the hitherto untouched beauty of Paris, protest with all our strength, with all our indignation in the name of slighted French taste, against the erection … of this useless and monstrous Eiffel Tower … To bring our arguments home, imagine for a moment a giddy, ridiculous tower dominating Paris like a gigantic black smokestack, crushing under its barbaric bulk Notre Dame, the Tour Saint-Jacques, the Louvre, the Dome of les Invalides, the Arc de Triomphe, all of our humiliated monuments will disappear in this ghastly dream. And for twenty years … we shall see stretching like a blot of ink the hateful shadow of the hateful column of bolted sheet metal.” – excerpt of a protest letter on the Eiffel Tower sent to Charles Alpand who was Minister of Works and Commissioner of the 1889 World’s Fair. (They had no idea that the Eiffel Tower would become the symbol of Paris and would attract a lot of tourism from all over the world.)

Business and Economics? That Won’t Pay Off

Let’s just say, whoever started this company shouldn’t have gotten a C on his term paper proposing an overnight delivery service. Because all this shows that it was a very good idea.

“The concept is interesting and well-formed, but in order to earn better than a ‘C’, the idea must be feasible.” — A Yale University management professor in response to Fred Smith’s paper proposing reliable overnight delivery service. (Smith went on to found Federal Express Corp. We can now determine that the ‘C’ he got from his Yale management professor was undeserved.)

“A cookie store is a bad idea. Besides, the market research reports say America likes crispy cookies, not soft and chewy cookies like you make.” — Response to Debbi Fields’ idea of starting Mrs. Fields’ Cookies. (Thankfully, Mrs. Fields had the business sense to ignore this response and found a company that survives to this day.)

“Stocks have reached what looks like a permanently high plateau.” — Irving Fisher, Professor of Economics, Yale University, 1929. (Come October and Irving Fisher would be eating his own words when the stock market crashed and the Great Depression later ensued.)

“Remote shopping, while entirely feasible, will flop – because women like to get out of the house, like to handle merchandise, like to be able to change their minds.”–TIME, 1966, in one sentence writing off e-commerce long before anyone had ever heard of it. (TIME really had no idea what it was talking about. Because online shopping is incredibly popular right now.)

“We will bury you.” –Nikita Krushchev, Soviet Premier, predicting Soviet communism will win over U.S. capitalism, 1958. (Sorry, Kruschev, but US capitalism would win over the Soviet Union instead. Yet, I’m not so sure about US democracy would win over whatever Russia has though. Because Putin has been in power there for a very long time.)

“In all likelihood world inflation is over.”–International Monetary Fund CEO, 1959. (Inflation is still going on and is happening all the time.)

“This antitrust thing will blow over.”–Bill Gates, founder of Microsoft. (No, it won’t, Bill, but it will drag on until 2001.)

“Capitalist production begets, with the inexorability of a law of nature, its own negation.”-Karl Marx. (Sorry, Karl, but capitalism is still alive and well thanks to government regulations, trade unions, and consumerism.)

“Your cigar-ettes will never become popular.”— F. G. Alton (cigar maker, turning down Mr. John Player), 1870 (Yes, they did, unfortunately. And there’s a lot of lung cancer to prove it.)

Crime, Law, and Order? What’s That a Show?

“The case is a loser.” -– Johnnie Cochran, on soon-to-be client O.J.’s chances of winning, 1994. (It should’ve been, but thanks to Johnnie Cochran’s thing about the glove, it wasn’t.)

Environment? C’mon, This is Nonsense

“By 1985, air pollution will have reduced the amount of sunlight reaching earth by one half … ” – Life magazine, 1970. (Not really, except maybe in China. Not to mention, this didn’t take climate change into account.)

“The deliverance of the saints must take place some time after 1914.”— Charles Taze Russell (founder of Jehovah’s Witnesses), 1923 (Now that’s a little better.)

“The death rate will increase until at least 100-200 million people per year will be starving to death during the next ten years.” – Paul Ralph Ehrlich, 1970. (46 years later and that many people isn’t dying of starvation.)