Now though I’m a weekly churchgoing Catholic leftist, I rarely talk about religious matters that don’t concern holidays or tacky religious art because I really don’t want to offend anyone. But this month Pope Francis plans to deliver an encyclical on the environment as well as accepted climate change as a legitimate threat caused by human activity which has riled a lot of people on the American Catholic Right. Now the American Catholic Right believes that “true” Catholics like them should accept everything of Catholic Church says about the things they agree with like the Church’s stance on sex and reproductive issues that most American Catholics tend to either not take seriously or be major hypocrites about (and it doesn’t help that the biggest Catholic voices in this country come from people on the Catholic Right who are mostly concerned about the issues. However, I should tell my readers that the Catholic Right basically consists of the biggest jerks affiliated with the Roman Catholic Church in America who represent little of what the Roman Catholic Church stands for and not at all of what most American Catholics believe in.) However, when it comes to issues the Catholic Church and the American Catholic Right disagree with, then the latter tends to downplay the seriousness of the matters at hand whether they be internet neutrality, universal healthcare, affordable childcare, social welfare for the poor, capital punishment, unionism, penal reform, economic justice, immigration reform, torture, war, gun control, capitalism and consumerism, social justice for minorities, police reform, ending homelessness, and of course, environmental protection. If being a born and raised progressive Catholic ever taught me anything it’s that these conservatives have absolutely no legitimate credence to say who’s a good Catholic and who’s not since they’re no more faithful to church doctrine in their politics than their liberal counterparts (possibly even less). It’s just that American Catholic conservatives tend to call fellow liberals out on this more frequently for not conforming to their own personal vision of Catholicism. But in personal preference, I just try to be as good a Catholic as I can be even if the Church and I might disagree with some issues on sex and reproduction. Besides, I tend to state that the Catholic Church is one of the reasons I’m a true blue liberal today, a fact which I’m proud of. And I will remain a practicing Catholic in my own way whether the Catholic Right likes it or not.

Now the American Catholic Right is filled with climate change deniers like any good contingent of the Republican Party and many of them don’t like how Pope Francis is taking climate change and environmental very seriously. A good example is when Rick Santorum stated that Pope Francis should leave climate change to the scientists since it’s a “controversial theory,” despite that Pope Francis agrees with 97% of climate scientists and Santorum doesn’t. And even if Pope Francis didn’t work as a chemist before entering the priesthood or have any scientific background whatsoever, is he wrong to talk about environmental problems and caring for creation? No way in hell. In fact, I’d think it should be part of his job.

Now Pope Francis’s encyclical is supposed to reflect the moral obligations in protecting the environment, which is something that I totally agree with and applaud him for it. This is especially since for decades, environment protection has been seen as a leftist cause championed by tree hugging hippies, vegetarians, and nature worshippers. Sure the Pope hasn’t seen any TV since the year I was born, but even so, he doesn’t really need much access to the mass media to know the effects of environmental degradation. I mean he’s spent most of his life in South America, which is no stranger to ecological damage in the least.  Nevertheless, despite how the United States tends to politicize social justice issues, Pope Francis treats environmental protection as a high moral priority it should be, which should have nothing political or leftist about it. But before he does his encyclical on the 18th, I’d like to go over a few things explaining why protecting the environment should be a moral obligation.

Saint Francis of Assisi is the Roman Catholic patron saint of environmentalism and ecology who preached that all men have a duty to protect and enjoy nature as stewards of God’s creation and as creatures ourselves. There are plenty of legends and tales about him that center on his great love for animals and the environment. And prominent conservative Catholics complain that Pope Francis’s eco encyclical is a break from Church tradition. Sorry, guys, but it ain’t.

This Reuters infographic illustrates the impact on air pollution and human health over the last 20 years from a report by the World Health Organization. According to WHO, air pollution caused 7 million deaths in 2012. mostly to respiratory problems and cardiovascular disease.

In the United States, there’s a phenomenon known as “environmental racism” that consists of polluters setting shop near neighborhoods with racial minorities and/or economically disadvantaged residents at an institutionalized and systematic scale. This results in poor and minority communities disproportionately affected by environmental hazards and least likely to benefit from environmental policy or community cleaning efforts. Of course, since US environmentalism tends to be dominated by white people, environmental racism doesn’t get the attention it should since it’s basically one of the worst examples of racial injustice and white privilege.

Family farmers especially suffer from environmental degradation since they don’t have nearly as many resources as their large agribusiness counterparts. In the United States, family farmers have it especially bad with the presence of the agricultural industrial complex as well as going broke while trying to compete with it. In the Marcellus Shale natural gas boom, these farmers were particular targets as potential lessees for the companies. The fact much of the gas is extracted from farmland puts crops and livestock at risk for chemical contamination through fracking.

This is an infographic from Russia showing the observation and forecasts relating to global warming (or climate change). The graphs show how average global temperatures and sea levels have risen as well as how snow levels have fallen. Also, notice how global warming is likely to lead to more frequent and destructive natural disasters on the side.

This is a picture of an explosion of an oil train derailment in West Virginia back in February of 2015. Now West Virginia is a prime area for environmental disasters since it’s economy and government is basically owned by polluting industries as well as a large population of poor people who can’t say no regardless of political affiliation. As of 2015, the state is now a dumping ground for the American energy industry. Now for the people of this state, the debate over green energy may be a matter of life and death. And as long as polluting industry remains profitable, West Virginians are basically screwed. Seriously, it’s very bad there.

Here’s an infographic based from the UN Panel report on climate change illustrating how businesses impact climate and how the climate impacts business. All too often environmental health tends to be sacrificed for short term profit without any concern for the long term consequences ahead.

John Steinbeck’s The Grapes of Wrath is a classic novel about a Depression-Era Oklahoma family of tenant farmers forced off their home due to adverse environmental conditions, economic hardship, and big agribusiness. They set out for California seeking a future only to find themselves doomed to a life as migrant farm workers. Sadly, this story really reflects many of the trials and tribulations many environmental refugees face all over the world. Made into a movie with Henry Fonda. 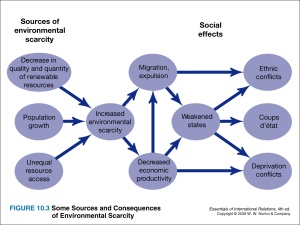 Environmental problems and natural resource depletion is a growing concern in the developing world with the unstable political systems they have as well as reside in places with a lot of endangered ecosystems and species. Environmental degradation may not be a sole source of conflict, but it can exacerbate it as well as make struggling for a lasting peace very difficult. And it doesn’t help that these countries have a high poverty rate and very few opportunities available.

God may have created the Earth for our benefit as well as other worlds with intelligent life. But even though it’s very possible intelligent life may exist on other planets, they’d still be many lightyears away. So instead of hoping for an planetary savior we can live on, we should focus on caring for the planet we have.

While conservatives and libertarians think it’s perfectly all right to cut down a forest to make room for a chemical plant, they don’t seem to get how future generations will have to deal with the ecological consequences even when the industry goes bust. There are much more important things than economic prosperity and jobs. And if I had a choice between the economy and the environment, I’d pick the environment every time. You don’t need to pollute to make a buck. So why risk it?

While West Virginia’s people aren’t being subject to the notable environmental disaster, their state is losing its natural Appalachian Mountain heritage due to the coal companies’ practice of mountaintop removal. These lofty mountains inspired the John Denver hit, “Take Me Home, Country Roads,” which has been recently made West Virginia’s state song last year. It’s very sad that these iconic majesties have to be reduced in the name of short term profit for energy industries. 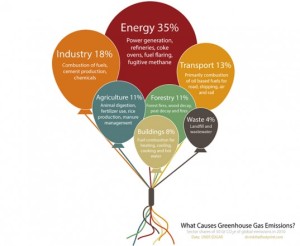 This is an infographic on greenhouse gas emissions that cause climate change, derived from the International Panel on Climate Change’s assessment report of 2010. Seems the highest carbon offenders tend to be from energy, industry, and transportation. It’s no surprise that executives of American and multinational energy and industry companies tend to be the most vocal deniers of climate change as well as most environmental problems in general.

This is from an infographic from 2013 that shows the kinds of species that are threatened with extinction as well as the loss of genetic diversity in our fisheries and farms. Let’s just say this is pretty disheartening when it comes to the world’s turtles and other creatures. Loss of species and biodiversity is one environmental problem that can’t be remedied. And sometimes the loss of one species can doom a whole ecosystem.

One response to “Our Moral Obligation to the Environment”