Of course, no one can celebrate Christmas without Christmas cards. After all, it’s probably one of the only holiday greeting cards people still send to each other. Many of them would contain generic images like the bell one above. But they mostly consist of Christmas trees, snowmen, nativity scenes, wreaths, and what not. Many may hold nostalgia for these vintage cards which can be beautifully painted. However, alongside the lovely vintage cards, there are some that don’t seem to make any sense, especially if they come from the Victorian era. So for your reading pleasure, I give you another assortment of crazy Christmas cards from decades past. 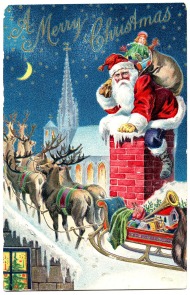 Here Santa asks himself, “Why do I have to go down chimneys when it’s more convenient to go through the front door instead? That would at least save me from all the aches and soot all over me.” 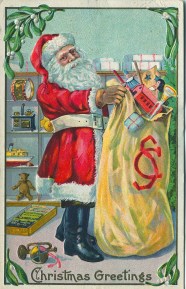 Yet, even though his sack is already full, it won’t be enough. Mostly because he has to deliver presents to millions of kids in one night. And he knows it.

Hey, the guy didn’t spend Christmas at a Waffle House. Now that’s really depressing, especially if you have to work there.

Well, you can’t expect Santa to wear his iconic red suit every Christmas Eve. This is especially if he suffers a wardrobe malfunction while trying it on.

5. Read the tea leaves for a joyous Christmas.

What the hell do tea leaves have to do with Christmas? Any hint here? Seriously, why? 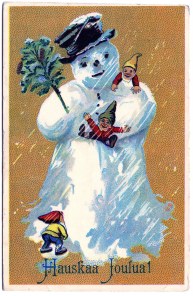 Just look at one of them slide down. Also, is it really snowing?

7. Watch where you ride your bike this Christmas.

Cause you could ride off the edge and end up in the water. So don’t read and drive.

8. No one could resist kids and animals, especially on Christmas.

Here a little girl hangs some green stuff over her dog. The dog isn’t pleased in the very least.

9. Winter time is always the right time for a sled ride.

Guy’s probably thinking, “Why did I have to do this? Couldn’t Mabel and I just spend a peaceful afternoon playing backgammon near the fire? I hope we don’t die.”

10. All she wants for Christmas is cash.

Here she’s got bags of it. Must have very wealthy parents. So she won’t have a problem snagging a husband. Even if he’s below her standing.

11. Krampus seeks all the bad kids during the holiday season.

Yes, he uses a global tracking system to locate them. Hear Donald Trump’s kids are on the top of his list. 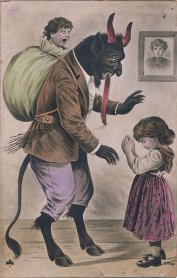 Girl’s like, “Thank you for kidnapping my brother, Krampus. He’s a complete piece of shit.”

13. Don’t forget to hang your stockings close to the fire.

Though I think that might be too close if you know what I mean. Also, the kids look rather creepy if you ask me. 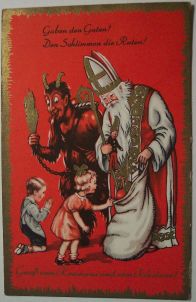 St. Nick gives toys to the good girls and boys. Krampus gives bad kids what they deserve. Yet, both figures act like they’re like seeing kids at the mall for photo ops here.

15. Santa wishes you a Merry Christmas.

Okay, that’s a creepy Santa. Not sure if I want to receive toys by that terrifying old man who seems more out for blood than wanting to spread joy and cheer.

16. Don’t be an ass this holiday season.

What the hell do donkeys have to do with Christmas? I know they’re in nativity scenes but still.

17. May you all have a happy Christmas.

Unfortunately, these kids don’t seem to be celebrating with joy and cheer. Then again, there was plenty to be blase about in the 1800s.

Kind of reminds me the white witch meeting Edmund. But without the hard drug of Turkish delight, which is crack in Narnia.

19. Everyone knows the little drummer boy. But what of the little shepherd boy?

He kind of feels left out in the whole nativity story. Still, the big eyes are kind of creepy. No hard feelings, Margaret Keane.

20. Merry Christmas from the clown and turkey pageant.

The turkey reminds me of Doc Brown from Back to the Future. While clown just plain gives me the creeps for some reason.

Let’s hope nothing upsets whatever’s in the bag. And I hope the lantern doesn’t set anything on fire.

And yet, this card features children boozing it up. What the fuck? Seriously, these kids seem like they’re a bunch of alcoholics.

23. Here the children watch for Santa by the fireplace.

That kid on the chair reminds me of a weird-looking kid from a Saint Vincent de Paul statue at my college. And yes, the girl’s features are way out of proportion.

24. No one can resist a couple of cats on Christmas.

Okay, why is the kid in a clown costume around Christmas? Seriously, Halloween was like over a month ago. 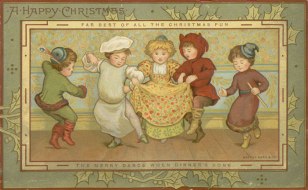 And yet, they’re all dressed up in costumes, confused by what holiday this is supposed to be. One’s even dressed as a wizard.

27. Goat wishes you a happy Christmas.

Just what do goats have to do with Christmas? Seriously, I have no idea. Can someone elaborate for me?

Man, can’t believe the early years of Veggie Tales featured such graphic violence. While the carrot’s like, “What the hell are you doing?”

29. On Christmas, some kids get all the presents.

And this kid seems really happy with al the stuff they have. And if you attempt to play with any of their shit, they will kill you.

30. Krampus always has to put the kids in the basket. 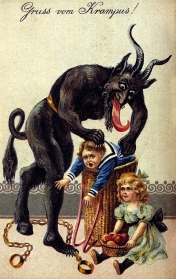 Krampus is like “Stop crying, I don’t have all night here.” While the girl’s just smiling and sitting pretty.

31. Here Krampus flies on his broom of brats. 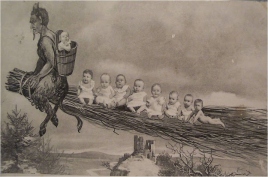 Though most of these kids seem under the age of 3. Far too young and innocent to be considered either bad or good.

33. Krampus doesn’t care about pulling a girl’s hair out. 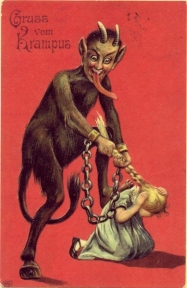 He’s like, “You don’t want me to yank your hair out, do you. Now get in the basket.”

34. Santa looks at his Christmas orders. 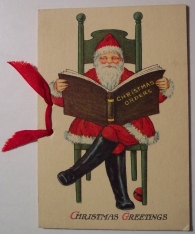 Here he’s thinking, “Oh, great, Elsa doll again. Can’t these girls ask for anything else like a dollhouse?”

Indeed, he’s got a sadistic streak. So these kids are in for a world of pain.

36. Why would Santa need a sleigh if he can just fade into the background? 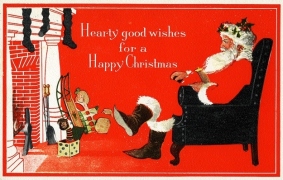 After all, he’s wearing a red suit that goes with the wall. And he’s about to teleport to the next house.

37. Grasshopper and moth wish you a merry Christmas.

38. “Who thought getting a flamingo to Santa was a good idea?”

Yeah, if you’re a small garden gnome, that’s no a good idea at all. This is especially during the holiday season, especially in Florida after a freak snowstorm.

39. This boy just wants to make it easier for Santa. 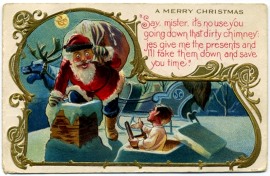 Seriously, Santa should take advantage of the convenience. The boy’s making him an offer he can’t refuse.

For when you’re adult, you can pull a Krampus like a rabbit out of a hat. So he can’t scare you anymore.

41. Dogs wish you a happy Christmas. 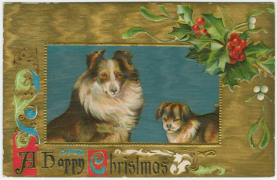 42. Merry Christmas from an attack dog and the donkey that steals your laundry.

Why would anyone hang their clothes on the line in winter? Seriously, that’s the worst time of year to do so.

43. Compliments of the season from the bugs with a basket.

I’m sure whatever’s in the basket isn’t having a good time. Since the bugs intend to feast soon enough.

44. What’s faster the snail or the cockroach? 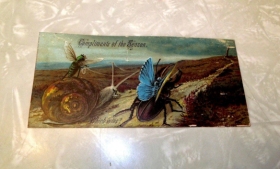 The cockroach and butterfly of course. Snails are incredibly slow creatures. Also, why is this a Christmas card? 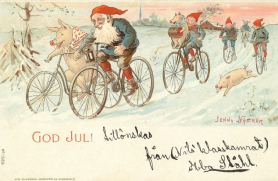 Who the hell rides bikes during the winter? Seriously, this is messed up on so many levels.

46. “May Christmas render your heart and home full of happiness.”

Featuring a gnome who kind of resembles Santa. But he’s small and near some ivy. Not sure why it’s there.

47. If Krampus comes, helps if you come prepared.

Girl’s got her whip in case he comes behind her. She’s not going to risk getting kidnapped. Or at least without a fight.

48. Loving Christmas greetings from a rickshaw. 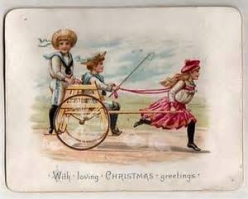 And it has to be the girl who has to do the pulling. Kind of sexist if you ask me.

49. Christmas time is one of cheer.

Yet, the chick’s not feeling it for this band. Also, shouldn’t this be an Easter card instead? Seriously, why use Christmas?

50. Fish always dig into the soup. 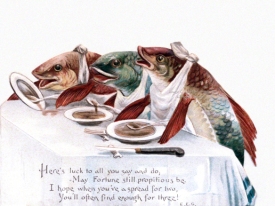 Okay, wonder how they use their fins to hold eating utensils. Seriously, you’d think this was straight out of Spongebob Squarepants.