Guarded by the Sworn Brothers of the Night’s Watch, the Wall is a giant ice barrier to protect the rest of Westeros from the White Walkers. Though until the Games of Thrones series started, they mostly fought skirmishes with Wildlings. Headquartered at Castle Black, they were once highly regarded but their reputation to that of a glorified penal colony and its numbers have plummeted to an all-time low. Just south of the Wall is the Gift meant to provide food and provisions for the Night’s Watch. Beyond the Wall, is outside the realm of the Seven Kingdoms. Mostly consisting of uncharted wilderness, it’s a frozen tundra with a Haunted Forest, Wildling settlements, giants, and the Children of the Forest.

Environment: This is a very harsh snow-covered wilderness. Beyond the Wall, there is very little arable land or vegetation but a lot of dangerous animals, along with the Haunted Forest. Even further north is the Land of Always Winter where the White Walkers live. Also home of wights, giants, and the Children of the Forest.

Resources: There’s not much here since it’s always winter.

Population: Mostly inhabited by the Night’s Watch and at least 90 tribes of Wildlings who regularly invade the Bay of Seals or Bay of Ice and sometimes climb over the Wall. Though some live in settled villages and town. There’s also a section of towns and farms known as the Gift, which mostly consists of peasants.

Key Cities: Though more of a township, the Gift is a stretch of land meant to help sustain the Night’s Watch. Beyond the Wall, there’s the Wildling port town of Hardhome and White Tree. 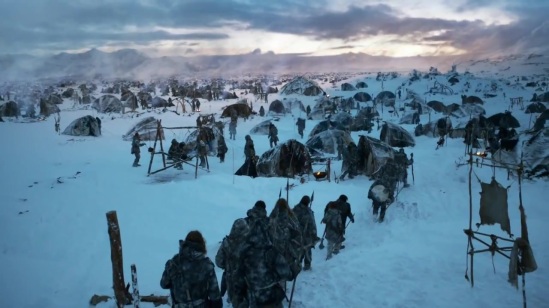 Culture: The Wildlings have an egalitarian and libertarian view on leadership, though chieftains do exist. Wall administered by the Night’s Watch.

Religion: Most in the Night’s Watch worship the Faith of the Seven while everyone else the Old Gods of the Forest. As for the Wildings, who knows.

Current Status: Since Jon Snow came back to life, the Night’s Watch doesn’t have much going for leadership save for Dolorous Edd.

Best Known for: The place where they try to contain the White Walkers.

Landmarks: The Wall itself is at least 700 ft high and spans at least 500 miles from coast to coast.

What to Avoid: You might want to stay away from the Night’s Watch. They were once highly regarded like the Order of Maesters and attracted the most elite of Westeros. But in recent centuries, the Wall has essentially become a dumping ground for bastard or unfit sons of Lords along with various criminals, rapists, and those who joined the wrong side of a war. With the latter joining to receive a full pardon. Actually don’t go near the Wall period since the Night’s Watch has become grievously undermanned, numbering less than a thousand which is an all-time low. Definitely watch out for White Walkers and don’t run into the Children of the Forest. Oh, and you might want to beware of the Wildlings, though they’re more of a nuisance south of the Wall than anything, especially in the Gift.

For Those Who Want to Visit: Just stay in the Gift at all times, even if it’s overrun by Wildlings. Actually, you might want to stay out of the region entirely.