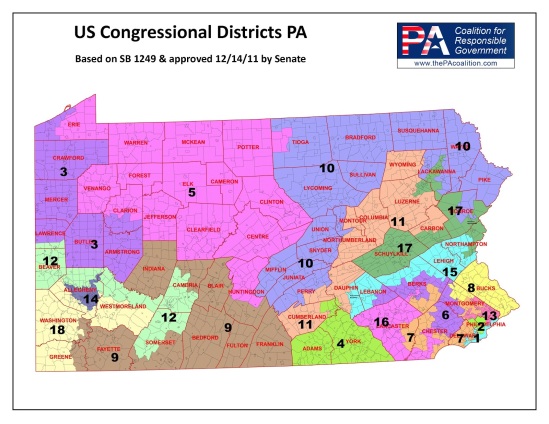 Every ten years after the census, each state in the US is required to redraw its legislative districts in order to accommodate changes in population. Now redistricting is supposed to be fair and proportional. But since most states in the US have their legislatures control redistricting, this isn’t always the case. As result you have a practice known as gerrymandering. Named after an early 19th century governor of Massachusetts, to gerrymander is to manipulate an electoral district’s boundaries so as to establish a political advantage for a particular party or demographic. The primary goal for this is to maximize the effect of supporters’ votes while minimizing opponents.’ Recently, gerrymandering has become a major problem in the United States mostly due to a dominant political party wanting to retain power in the state. So much so that the US Supreme Court has recently agreed to hear arguments on a partisan gerrymandering case. Nevertheless, though the practice is mostly perceived as bad for democracy through court rulings and anti-discrimination laws, it doesn’t seem to go away any time soon. 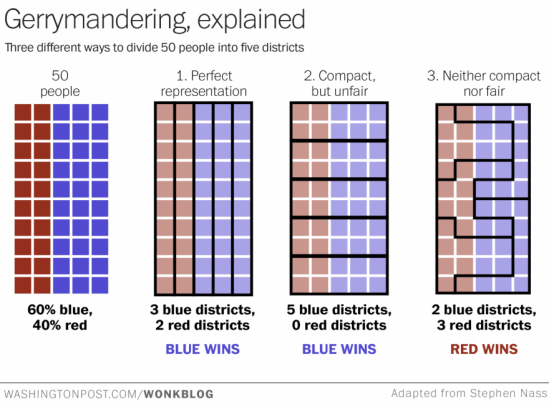 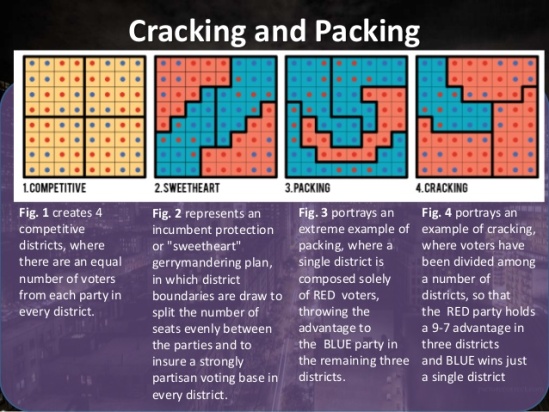 Here are common ways states gerrymander districts for representatives. Cracking and packing are the most common. But sweetheart gerrymandering exists, too so incumbents can stay in.

Cracking: consists of spreading voters of a particular type among districts in order to deny a sufficiently large voting bloc in any particular district. For example, a state might split urban area voters among several districts of mostly suburban voters. Such arrangement would be on the presumption that the two groups would vote differently and the suburban voters far more likely getting their way in elections. You can see this in action by looking at Austin, Texas in the state’s congressional map where parts of 5 districts are but not one of them contain a majority of its residents or voters. And it’s very clear the Texas Legislature drew these districts that way to curb Austin’s liberal political influence within the Republican dominated state.

Packing: To concentrate as many voters of one type into a single electoral district in order to reduce their influence in other areas. In some cases, legislatures may do this to obtain representation for a community of common interest (like a majority-minority district), rather than to dilute that interest over several districts to the point of ineffectiveness (and to avoid likely racial discrimination lawsuits if minority groups are involved). You can often see this in congressional districts pertaining to urban communities of color. When the party controlling the districting process has a statewide majority, packing is usually not necessary since the minority party can be “cracked” everywhere. Though it’s often employed by parties to pack voters together into a minimum number of districts and don’t have enough representation in others to win the majority of the House’s seats. Because by forfeiting a few districts packed with the opposition, cracking can be used in shaping the remaining districts.

Hijacking: Redraws 2 districts in such a way as to force 2 incumbents of the same political party to run against each other in one district, ensuring that one of them will be eliminated. Meanwhile, this would leave the other district to be won by someone from a different political party. A good example of this happened in my own congressional district during the early 2000s, when Congressmen John Murtha and Frank Mascara had to compete against each other. And my district ended up with a representative from Johnstown.

Kidnapping: Aims to move areas where a certain elected official has significant support to another district, making it more difficult to win future elections with a new electorate. This is often employed against politicians representing multiple urban areas, removing larger cities in order to make the district more rural.

These tactics are typically combined in some form, creating new “forfeit” seats for packed voters of one type in order to secure more seats and greater voter representation of another type. This results in candidates of one party (usually the one responsible for the gerrymandering) winning by small majorities in most of the districts and another winning by a large majority in only a few. 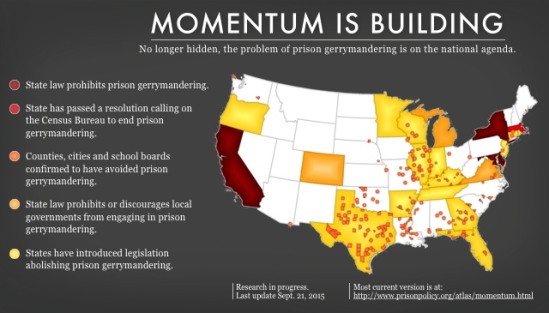 Prison-based gerrymandering is when they count urban prisoners in their rural corrections facilities as residents despite that they can’t vote or they don’t live there. Here is a map of what states and localities have done to handle the problem. As for those who don’t, well, it’s very clear they benefit from it.

Partisan Gerrymandering– When districts are redrawn in order to increase a political party’s power in legislatures. This is the most general form of gerrymandering that it’s just referred to as “gerrymandering.”

Incumbent or Bipartisan Gerrymandering– When the districts are redrawn in order to protect incumbents in both parties in order to keep the status quo, regardless of what voters want.

Prison-Based Gerrymandering– Counting incarcerated people who aren’t allowed to vote in the district where the prison is located instead of their home district.

Negative Racial Gerrymandering– Drawing districts to prevent racial and ethnic minorities from electing their candidates. White Southern Democrats used this from Reconstruction to the mid-20th century to reduce black people’s voting impact if efforts to effectively disenfranchise them had failed. Prohibited thanks to the 1965 Voting Rights Act and subsequent amendments.

Affirmative Racial Gerrymandering– Drawing district lines in order to favor ethnic and racial groups. Though whether it benefits minorities is very hard to say since the practice is controversial that there are several Supreme Court rulings on this. Because this type has been known to both increase and decrease minority representation in federal and state governments. Since the Civil Rights Era, it’s been difficult to determine since most minorities vote Democrat while white conservatives have shifted Republican during the last 4 decades. Nevertheless, the Supreme Court has ruled in the North Carolina case that partisan gerrymandering along racial lines is unconstitutional.

Signs of Gerrymandering in Your State:

Why Gerrymandering Is Bad: 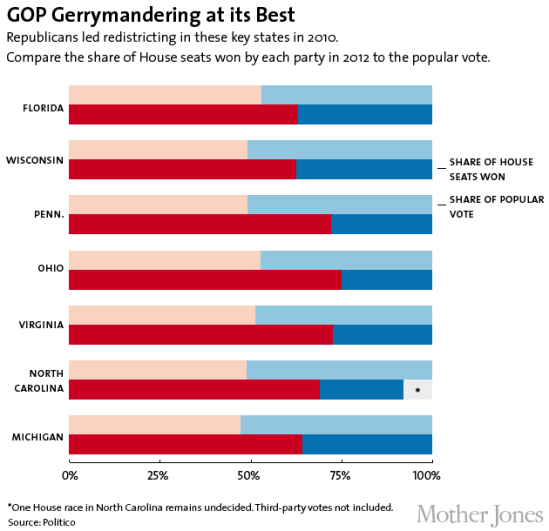 In recent years, Republicans have greatly benefited from gerrymandering as seen in this graph. And because of this, many cities aren’t well represented at all.

How to Detect, Handle, and Prevent Gerrymandering: 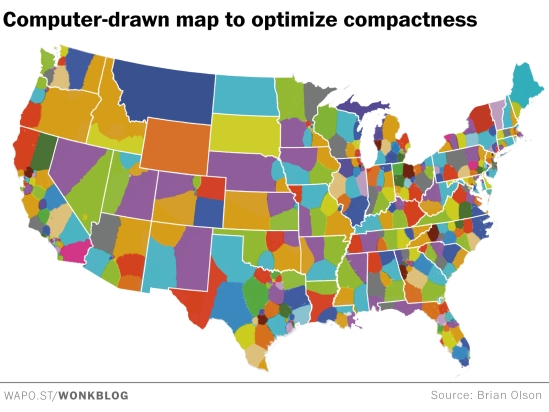 Here’s a rough map on what the United States would look like if the districts were redrawn for compactness. By the way, this is done by a computer.

When each party wins a district election in rough proportion to its popularity, the efficiency gap is near zero. But if a district plan is above a certain threshold a gap of 2 or more seats in congressional elections or a gap of 8% or greater for state legislature races, then there’s a constitutional problem. 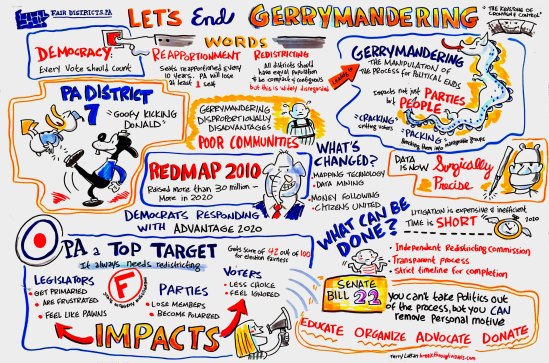 And so I end this post with a rough guide to gerrymandering in Pennsylvania. Still, this is a major problem in American democracy that affect us all. We need to do something about it.