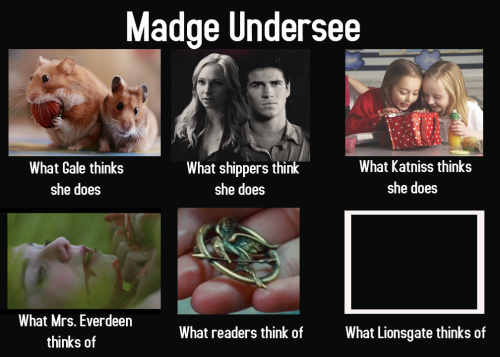 Note: This post contains stuff that wasn’t in the movies. So if you haven’t read the books, you shouldn’t be viewing this.Because those who only saw the movies really wouldn’t understand.

When adapting books into movies, screenwriters have to find ways to compress a several hundred page novel into a 2 hour film. This isn’t an easy task. But as with most movie adaptations, things tend to get left out while stuff tends to get changed around. The Hunger Games movies are no exception to that. Yet, one of the major parts that got left out of the movies was the story surrounding Madge Undersee. In the books, she’s the daughter of District 12’s mayor as well as Katniss’s friend at school since both of them found themselves in rather isolated positions due to their place on the socioeconomic ladder. Also, both of them have mothers whose experience with tragedy doesn’t really help their parenting skills. But unlike Katniss, this doesn’t change Madge’s situation too much. Nevertheless, in the books, she’s the person who gives Katniss a Mockingjay pin for luck after she volunteers to be a tribute in her sister’s place. In Catching Fire, it’s revealed that the Mockingjay pin in question was once owned by Madge’s aunt Maysilee Donner who was also a tribute in the Hunger Games (as well as best friends with Katniss’s mother). In fact, she was in it the same year as Haymitch. Yet, unlike Katniss and Peeta, Maysilee didn’t make it. Still, Madge’s story ends when she and her family are killed when District 12 gets bombed at the end. Those who only saw the movies wouldn’t know anything about this girl because Madge isn’t even in it. 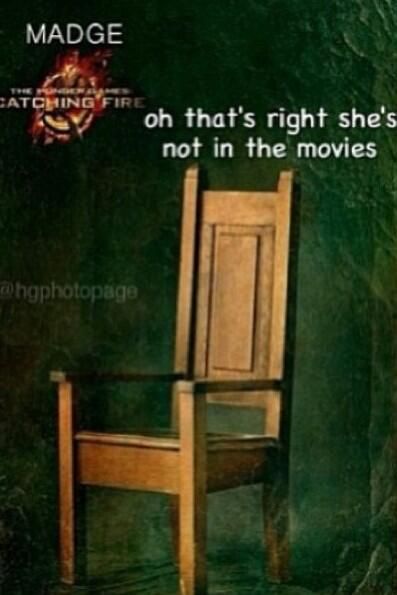 When it came to doing a song parody for her, I couldn’t think of a better one than “Diva’s Lament (Whatever Happened to My Part?)” from Spamalot, itself a musical version of Monty Python and the Holy Grail. The original version has the Lady of the Lake angrily complaining on not making a single appearance in the show since Act II despite being the leading lady. And if she’s the leading lady, then she should more time on stage than most of the other characters. Never mind that she wasn’t even in the original movie at all. In the Hunger Games version, I have Madge Undersee complain how she got adapted out of the movies despite being a rather important character. And in some ways, she kind of has a point.

“Whatever Happened to My Part?”

What ever happened to my part?

I was important at the start.

I am Katniss’s childhood friend

And gave her my dead aunt’s pin.

Nobody knows just who I am

And that the mayor is my dad.

I was in the books you see here

But they cut me from the feature.

Cause my storyline would complicate the plot.

Whatever happened to my part?

Do they know about this pin?

Its backstory thick and thin

It was once owned by my late Aunt Maysilee.

She was reaped but didn’t win,

And unpleasantly done in,

Whatever happened to my tale?

I’m in the books but not the film.

Now the viewers are all confused,

Not knowing how the pin was used.

Why do I even try to give a fuck?

I play a role in the first two books

Well they can kiss my tush

It seems to me they’ve really lost the plot

Whatever happened to my

Whatever happened to my

Not yours, not yours,