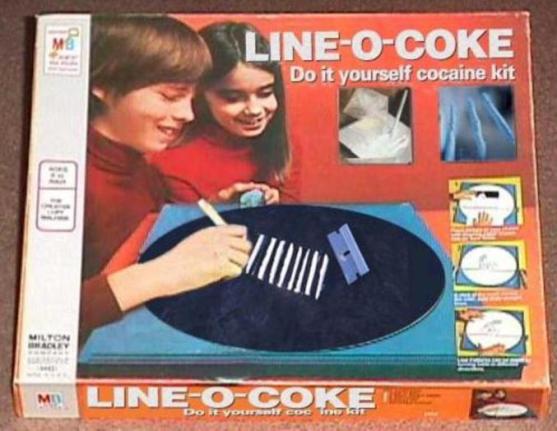 Now we’re closing in on the end. Of course, like most forms of media out there, some board games may live forever while others are just “period pieces” that might seem a good idea at the time, but they don’t age well. And then there are board games in which you have to wonder what the hell they were thinking. Still, before the age of the Internet you might see a lot of good board games like Monopoly and Scrabble as well as the like. But you also have stuff that’s racist, sexist, and very politically incorrect. For instance, the Gay Monopoly game might’ve been quite all right when released in the 1970s, but nowadays, not so much. Not to mention, it also neglects the lives of lesbians but in the 1970s that would’ve been forgiven since the people at the forefront of the Gay Rights Movement at the time were gay men. This might be the same for all the girl games that came out in the 1950s and 1960s which most people today would find inherently sexist. So for your reading pleasure here is the penultimate installment to my series of family unfriendly board games.

Like Groop Loop, Swivel also inspires some degree of family friendly bondage and randy horseplay. Yet, the difference with this one is that the players have to knock off opponents’ cones and they tie ropes around their waists with pendulums in the middle.

Object: Players have a rope tied at their waists which is tied to a central pendulum. Players pivot their bodies trying to swing the pendulum so that it knocks down their opponent’s pins but not their own.

Why they thought it was a good idea: Hell, if I know the answer to that. It was created by Milton Bradley in 1972 so probably the influence of drugs.

Why it’s not: Let’s just say it inspires randy horseplay. Really not the kind of game you want to play with your family. Seriously, it’s an awkward situation waiting to happen.

Though supposed to stimulate discussions about safety between parents and children, I’m not sure if this game would be something you’d want to play on a Friday night. Of course, some contents of this game is rather depressing as I’ve described.

Object: A game about safety in which players spin a spinner and move that many spaces. Cards are also matched. Players are asked questions about safety and game actively encourages discussions about the subject.

Why they thought it was a good idea: It was meant to teach children about safety during the 1980s. Particularly when it comes to discussing safety issues with parents in a fun, relaxed, manner.

Why it’s not: While it’s supposed to bring discussion of safety issues between parents and children in a fun and relaxed manner, I’m not sure if that’s the case here. A couple card samples:  “A stranger offers you a ride in his dirty black van. Go back five spaces and pick a Therapy Card,” and “Your kite is stuck in a power line.  Lose a limb – and a turn.” I guess board games aren’t a great way to discuss safety issues are they?

The kind of board game in which players try to survive after a thermonuclear war between the US and the Soviet Union. Said to be unwinnable and not the kind of post-apocalyptic fun for the whole family.

Object: Basically set in the US 20 years after a thermonuclear war with the Soviet Union. Players control one region of North America and part of Canada consisting of the Northeast, Midwest, Southwest, and Far West. Has 5 distinct rounds consisting of Production, Trade, Consumption, Political and Military, and Financial. Also between the 4th and 8th turns, population increases by 10%. Players can establish taxes, control fuel, manipulate labor, or battle their opponents.

Why it’s not: Well, for one it’s said that this game is unwinnable. Second, I’m sure post-apocalyptic survival game isn’t appropriate fun for the whole family. Besides, I’m sure a nuclear war would leave very few survivors. 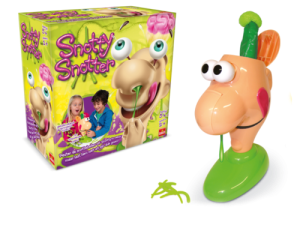 Gooey Louie is a game in which players try to pull boogers out of a guy’s head save for the one that makes his brains pop. Disgusting? I’ll say. Said to appeal to all ages (though I beg to differ).

Object: Pull the gooeys out of Louie and win. Watch his brain pop out when the special gooey gets picked.

Why they thought it was a good idea: I have absolutely no explanation for that one. Came out in 1995.

Why it’s not: Well, in involves pulling things out of a guy’s nose. Also has brains popping out. Definitely not the kind of game you want to play with the whole family who might be grossed out by it.

The game in which large thumbs and sticking explosives into a shake is said to create an explosive good time. Of course, you couldn’t say much if played with the real things.

Object: With oversized thumbs, players try to put dynamite stacks into a shack before it blows up.

Why they thought it was a good idea: I don’t know. It was made in 1968 by Milton Bradley. So your guess is as good as mine. Drugs?

Why it’s not: Well, other than the explosive premise, I wonder if some of the stuff can fly everywhere when the shack blows up. Also, let’s just say playing the game with the real shack and real dynamite wouldn’t go so well.

Legal Decision is a game that shows players how the legal system works in less time than actual court proceedings. But it sometimes seems that way while playing it because it looks quite dull.

Object: Players participate in a courtroom trial in roles of the defense attorney, prosecutor, jury foreman, judge, and others. Witnesses testify, cross-examination may change testimony, juror’s sympathy can be swayed, and new evidence can be introduced. Drama builds as jury moves toward its verdict.

Why they thought it was a good idea: Guess someone wanted to educate people about the legal system, particularly the flaws.

Why it’s not: For one, it’s difficult to recreate real court proceedings since they tend to be horribly long. Second, it’s entirely governed by luck. Third, it’s said to highlight a single case where evidence is clearly insufficient and conviction is fairly likely.

Based on the hit PBS TV Show, this game would sure make a good time for fans, antique dealers, and antique collectors. For everyone else, not so much. Probably should get the Downton Abbey board game instead.

Object: Players are given a hand of 2 different types of cards such as 10 value cards and 3 Antique speak cards. Goal is to get rid of all cards in their hands. During a turn, the player selects an antique card and chooses a value from their hand to correspond to what the player thinks is worth. Once done, the player reads 2 stories printed on the back of the cards with one true, the other false. Once the stories are read, all the players will vote on which one is true. The true story and actual value are revealed. Game ends when a player is out of cards.

Why they thought it was a good idea: Well, it’s a tie-in to a PBS show called Antiques Roadshow, which is still running.

Why it’s not: This is more of a trivia game for antique dealers, collectors, and diehard fans than anything. It’s also very much luck based as well. Also, incredibly stupid. 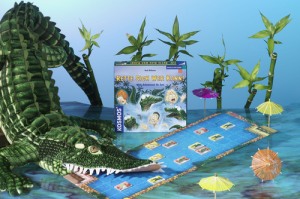 In this game, players are charged with trying to save swimmers from the crocodiles and the crocodiles from each other. Of course, though recommended for ages 8 and up, I’m sure as hell wouldn’t recommend it for families in Florida.

Object: Crocodiles are let loose in the swimming pool and are attacking swimmers as well as each other. First player to bring all the crocodiles and swimmers to safety wins.

Why they thought it was a good idea: Believe it or not, this came out in 1968 and is recommended for ages 8 and up. Other than that, I’m not sure.

Why it’s not: I’m not sure if a game about crocs devouring swimmers in a pool is great for a family game night. This is especially true if you live in New Orleans or Florida where a croc infestation in your swimming pool is a thing you have to worry about. Also, it’s said to be a 2 player game.

Available?: It’s been through a few versions. 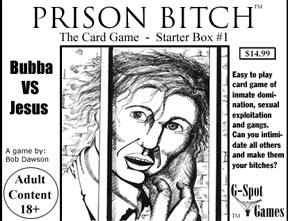 Now this is a game which is supposed to be a take off on male prison life as well as a very politically incorrect one. Was actually banned from a game convention due to its depiction of prison rape. Hasn’t stopped others though.

Object: Players assume character decks and portray a male prison inmate competing for top dog within their prison cell. Players can recruit bitches, gather a gang of thugs to attack other players, as well as use event cards like Parole, Trip to the Infirmary, and Thugs on Dope to effect or eliminate opposing Thugs. Players must defeat opponents either in combat or reducing their Reputation points to zero.

Why they thought it was a good idea: It’s supposed to be a satire on the male prison system and released in 2003. Apparently created by a fan of The Shawshank Redemption.

Why it’s not: It was banned from the 2003 Origins Game Faire for being too offensive. Besides, I’m not sure if mocking what goes on in male prisons is a good idea, especially with the title of “Prison Bitch.” This is especially true if it contains prison rape and it doesn’t help that people joke about it.

Available?: I’m not sure, but it didn’t stop others from creating games pertaining to prison rape. 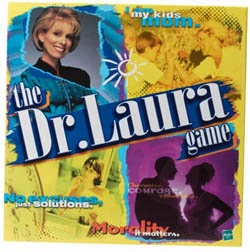 For those who like trashy daytime talk shows and Fox News, say hello to the Dr. Laura Game. It’s the one Cracked labeled as “the worst board game ever made.” Of course, Dr. Laura is said to be quite a bitch, to put it mildly.

Object: Players use cards to guess Dr. Laura’s responses to callers to try to give an answer that the others would like better determined by vote. Based on the talk show of Dr. Laura Schlessinger.

Why they thought it was a good idea: I guess Dr. Laura was a popular radio host at the time. It was released in 1997.

Why it’s not: Cracked has called this the “worst board game of all time.” Also, Dr. Laura is basically known for letting callers talk for 2 sentences before telling them that everything is their fault as well as going on a rant about people like them. Let’s just say she’s so mean-spirited and trashy she makes Jerry Springer and Maury Povich look like altar boys.