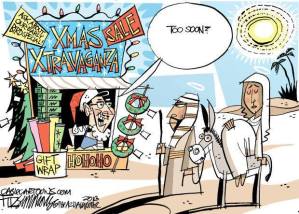 One of the things I detest about the holidays is how stores turn a once sacred holiday celebrating the birth of Christ into the biggest excuse for excessive consumerism and profit. Already I’m seeing Christmas commercials on TV and it’s not even Thanksgiving yet. And by this time, the only Christmas things I want to see are light up nights and school band kids practicing for Christmas concerts and parades. Also, bands practicing Christmas music in general. At least bands have a legitimate excuse to play Christmas music at this time of year. Still, once Thanksgiving rolls around, the Christmas Commercial Armageddon will be upon us and all hell will break lose.

Now in America, the Christmas season officially kicks off the Friday after Thanksgiving called Black Friday. Black Friday is said to be one of the biggest shopping days in the United States during the year and a business day when it’s all or nothing. A business not making a profit on Black Friday is one that won’t last much longer. Many Americans do their Christmas shopping on this day as well as trying to look for the best bargains for the latest gifts. And sometimes things can get pretty crazy with each store becoming as chaotic as a battle zone with every man for himself. I’m starting to wonder whether any Black Friday shoppers are among the craziest or most materialistic. I’m not trying to stereotype here since I guess every Black Friday shopper has their reasons for Christmas shopping on that day. I understand if some just want to get their shopping out of the way or can’t do it at any other time during the season. I understand those shopping on Black Friday for some last minute preparations for their family hunting trip during the weekend since deer hunting season starts that Monday in Pennsylvania. And growing up in Pennsylvania at least the start of deer hunting season gave me a day off from school. Yet, at least these people are planning to spend time with their family, even if it’s shooting Bambi. Of course, these two groups of Black Friday shoppers I have no problem with since they are pretty sane and have legitimate reasons.

Then you got your third type of Black Friday shopper who spends Thanksgiving night camping out in the parking lot of the mall or a big box store and scrambling into the place as soon as it opens at the crack of dawn. Now I may think camping in a store parking lot may be all right on a night the next Harry Potter book comes out. I’m not sure about spending Thanksgiving night in a tent at Wal Mart parking lot. I mean aren’t there plenty of other things to do on Thanksgiving night like spending time with your family. Is getting your kid the latest Xbox worth spending a cold dark night on the icy pavement? To me, lining up at 4 a.m. to shop to me seems ridiculous. To me, shopping is something you do to function or survive in a society. It’s not always fun and certainly not worth camping out at the crack of dawn for. Yet, for this group of people, shopping is a sport and Black Friday is their Super Bowl. They love the crowds, loud music, garish displays, and competitive atmosphere, all of which such shoppers see as a heaven. For me, this atmosphere is a personal hell hole since it consists of everything I hate about the holidays and why I avoid shopping on Black Friday like the plague. I can’t stand jammed packed stores filled with frenzied nuts shopping for the best deals and having fists fights break out over certain products. If I was working that day, I’d be thinking: Oh, God, please get me out of this nightmare! I can’t imagine how any retail employees ever manage to function normally with such unruly mobs creating a mess of things in their stores. Must drive anyone insane.

Of course, there have been reports of Black Friday shoppers doing strange things they wouldn’t normally do on other shopping days. There have been instances of violence in recent years ranging from unruly crowds stampeding employees, assault, shooting, stabbing, carrying weapons, and such. There have even been instances when people were killed, arrested, and rushed to the hospital. Sometimes police were called since employees couldn’t handle such ruckus. And for what? Over an Xbox? Parking Space? Seriously, I wonder how Christmas shopping can ever come to this. Maybe such shopping day simulates a customer’s insatiable desire to consume can bring out shopping rage turning your neighborhood Wal Mart into a scene from movies like Apocalypse Now, All Quiet on the Western Front, and Saving Private Ryan. Well, maybe not to that degree but pretty close. It’s said that dozens of people are injured each year by crazed crowds too eager for popular items. These range from bruises, sprained ankles, broken bones, and concussions. A good deal in a crowded store can turn the place into a mob scene with shoppers breaking into fights.

You think that retail giants would try to put a stop to this incendiary behavior but I’m so sure if you look at their business practices. And from what I see, these stores seem to encourage it since it causes such shoppers to overspend on cheap plastic crap made in China. Oh, I mean the cheaper plastic crap made in China. Retail giants have designed Black Friday in ways to put a shopper’s rational thinking out the window. Because when reason is out the window, people have a tendency to overspend and buy any kind of crap just because of a lower price tag. And if supplies are low, then customer turnout all the better. And even though Black Friday sales have been on the decline, retail giants continue to encourage such madness since it gives them publicity. Now many big stores are following Wal Mart’s suit and starting their big opening Christmas sale on Thanksgiving night. For me, such action gives me two questions. For one, who the hell shops on Thanksgiving night? And, seriously, is this all Thanksgiving is coming to? Besides, I don’t think retail workers would want to work on Thanksgiving, especially if they’ve been preparing the dinner. I mean they’re the ones losing family time to the unquenchable thirst of greed and consumer goods. And for many, Thanksgiving is one of the few days when they can sit back and relax since some retail employees work on weekends and not at good wages (except at Costco). Sure the Christmas season may be shorter than usual but sometimes I think the holiday rush seems to come earlier year after year with Christmas ads airing as early as September, which is way too soon. As far as I’m concerned, I think businesses need to clamp down on their holiday enterprising and put less emphasis on the rampant consumerism aspect. Instead, perhaps we need to see the holidays as a way of getting together with loved ones or just relax. Besides, everyone needs a holiday and you get better bargains in mid-December anyway.

One response to “Thoughts of Black Friday and Its Business Practices”

Follow The Lone Girl in a Crowd on WordPress.com
Join 1,526 other followers