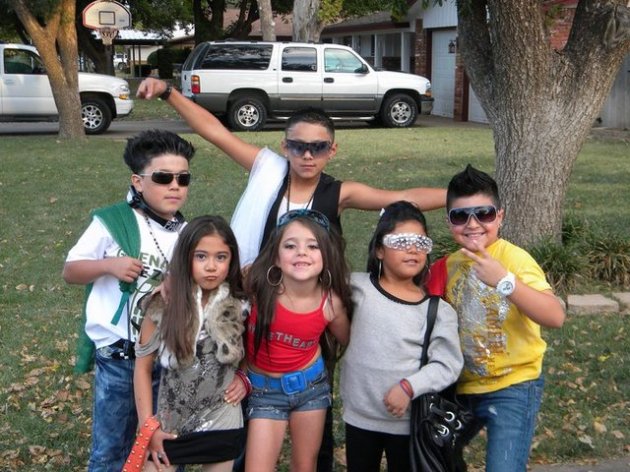 For those who remember my last post for inappropriate Halloween costumes, I was mainly setting certain standards that applied to a more general audience, particularly of the teen and adult variety (especially those in college). However, when it comes to Halloween costumes, not all standards are created equal especially if they pertain for children under the age of 14. For this I have a special set of rules to make sure your child can dress in a safe and appropriate costume and you don’t have to be accused of bad parenting. Of course, I don’t have any kids but I understand that the FCC standards of decency are much different for children’s programming as well as am the oldest of 23 grandchildren so those kind of count. Also, it’s not difficult to figure out and I’m just writing this post for laughs and using it to post bad costume pictures like the one of kids dressed from The Jersey Shore.

1. Make sure the costume idea is age appropriate- Okay, if you don’t want to be seen as a bad parent, you need to pay attention to this. Of course, there are certain costumes that shouldn’t be worn by anyone but sometimes there are certain costume ideas which are perfectly all right for adults but absolutely not suitable for children. Sexy costumes are a perfect example but there are age inappropriate examples for both boys and girls like these: 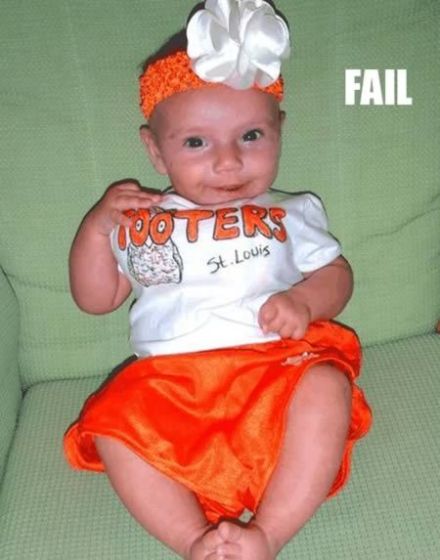 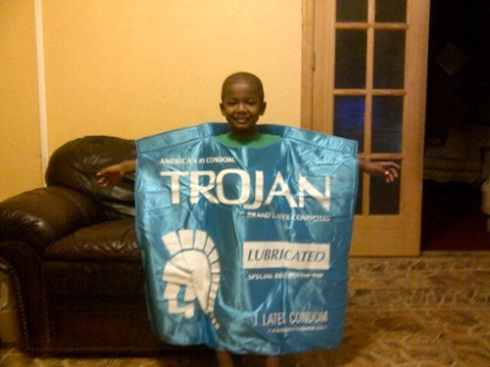 2. Make sure the costume is obtained from G or PG rated material- Or from any source in which you’ll let your kid watch. Of course, many superhero movies are PG-13 and so are the later Harry Potter films but these are perfectly fine. And I wouldn’t object from any parent dressing their kid as a hobbit if they’re Lord of the Rings fans. You can dress your kid as a stormtrooper for all I care. But, please don’t have your kid be dressed from a source material that’s rated R and strictly for adults like Hannibal Lecter. I mean children aren’t going to know who he is but parents probably will and they might get freaked out. See here: 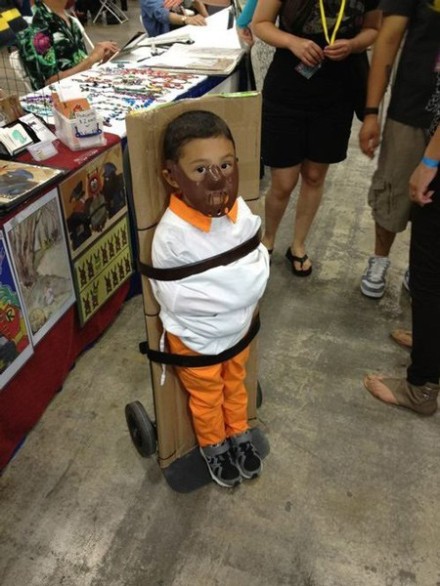 3. Don’t be gross or gory- Of course, on adult costumes grossness and goriness are perfectly all right since Halloween is supposed to be scary and most violence and gross out comedies are catered to adults anyway. For kids, not so much since there are plenty of debates about how much violence in the media influences children’s likeliness to commit violence themselves. As for grossness, you don’t want other parents to be disgusted by your kid’s costume. Of course, this one takes the cake: 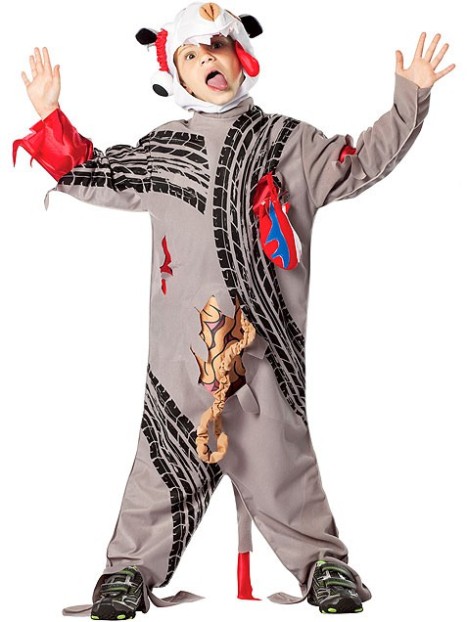 4. Make sure the costume sets a decent example- By this, I mean make sure it’s appropriate enough not for people to get offended by it or accuse you of bad parenting. Of course, if your son wants to dress up as his favorite character from My Little Pony, that is fine. If your son wants to dress up in a girly costume, that’s fine as well. Also, if your girl wants to dress in boyish costume, it’s all right, too. After all, this is Halloween where cross dressing is common among people who wouldn’t do so otherwise. Also, cross dressing is perfectly G rated. However, I wouldn’t advise any parent to have them wear costumes of political figures, controversial celebrities, reality TV stars, convicts, or any TV character known for doing very bad things (like Dexter or anyone from The Wire). Just don’t let your kid wear anything disturbing. 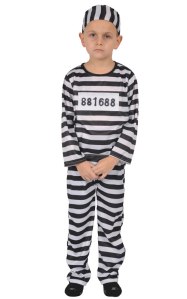 5. Make sure the costume is appropriate enough to wear in school- Of course, if your kid goes to a public elementary school, there’s a good chance that he or she will wear it in school on the last Friday in October. Make sure your kid’s costume fits into the guidelines of his or her school such as not having sharp edges as well as leave the weapons at home (I mean high schools don’t even have plastic knives in the cafeteria). Still, I wouldn’t recommend your kid wearing this for the same reason (and that it’s offensive): 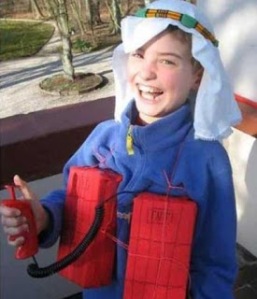 6. Make sure the costume doesn’t have anything to do with drugs or alcohol- This is a biggie since such content might be perfectly all right for an adult to wear, it’s unsuitable for children, especially if they’re elementary school age. Any child going as Walter White, Jesse Pinkman, Don Draper, or anyone else in a costume depicting drugs or alcohol will certainly not be allowed to wear it for school. As for the alcohol and cigarettes, use the idea with your spouse, not your kid. Also, I wonder what this parent was smoking when he or she thought this was a good costume idea for a baby: 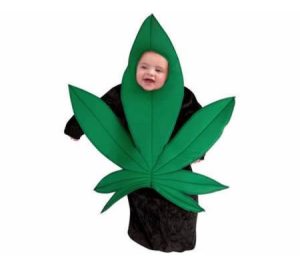 7. It’s all right to be scary but not too scary- It’s all right if your kid wants to go as something scary for Halloween. After all, Halloween is a holiday associated with ghosts, witches, ghouls, and monsters. However, there are some scary kid costumes that are very disturbing for adults and would certainly give little children nightmares, especially if they’re from horror movies aimed at teens and adults. Tim Burton film inspired costumes also fall into this camp. Such an example here: 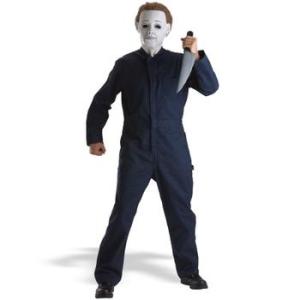 There are some costumes that are unintentionally scary such as this Pinocchio costume. Avoid this one like the plague: 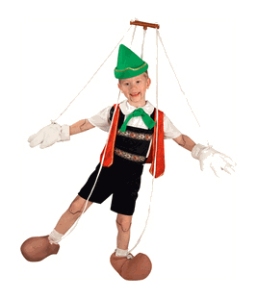 8. Make sure the costume passes political correctness- Of course, with adult costumes it’s okay to allow a little political incorectness now and then, just as long as it’s not outright offensive. For kids, you have to be a little more careful since while some costumes might be okay on and adult, they may not be for kids, especially if it insults someone who might give them candy. For instance, this Blind Ref costume might be a funny idea for adults and teenagers but for kids, this might end up insulting blind people. Thus, political correctness must be emphasized: 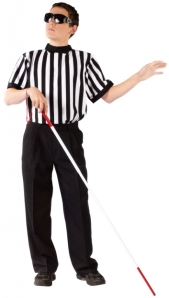 9. Don’t make your kid wear a costume that would embarrass them- Listen, you might want your kids to dress in a costume you might think is funny but if your kid carries the kind of expression akin to Ralphie in pink bunny pajamas, you might want to take a pass. Not to mention, there are some costume ideas that are just too cruel to instill on your kids. The boy who’s wearing a toilet costume is certainly going to get teased or beat up at school shown here: 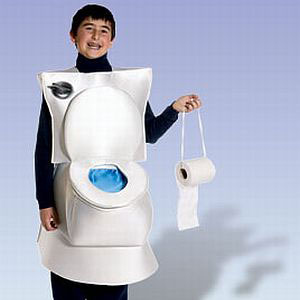 10. Naughty is fine, sexy is not- Of course, the terms “naughty” and “sexy” almost mean the same thing when it comes to Halloween costumes for adults. However, you don’t want your daughter to dress in a sexy costume but that in kids costume “naughty” doesn’t necessarily carry the same connotations. For instance, take this Naughty Leopard costume for toddlers: 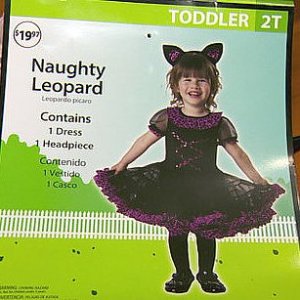 While it may say “Naughty Leopard” on the label, look closely ans see that it’s just a normal little girl’s costume that carries no sexual connotations whatsoever. This is fine. However, if a girl’s costume seems to resemble something off Toddlers & Tiaras or anything resembling child prostitutes, then it’s not okay. See here: 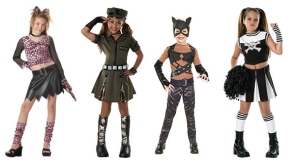 11. Make sure the costume is something your kid can go trick or treating in- A child’s costume needs to be practical such as allowing them to see and move around. Also, you want to emphasize safety in the equation such as having your kid’s costume not be something they could injure themselves or other kids. This baby Minecraft costume isn’t a real practical one to wear since it doesn’t have anything to see through. But it’s okay since it’s a baby costume. If this was worn by an older kid, it would’ve been worse: 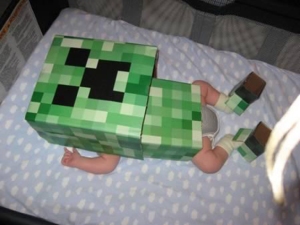 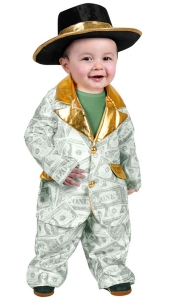 Of course, I might have missed a few criteria here and there but if you want to see which costumes your kids shouldn’t be wearing I have a few links at your disposal: