Known as “Hin-mah-too-yah-lat-kekt” in his native Nez Perce tongue, Chief Joseph led his Wallowa Nez Perce band during their most tumultuous period in their contemporary history. Basically, they were forcibly removed from their ancestral lands in the Wallowa Valley and relocated to the significantly reduced reservation in Lapwai, Idaho by the US federal government. The usual series of events culminated in episodes of violence led by Ned Perce resisting removal, including Joseph’s band and their Palouse tribe allies who attempted to seek political asylum in Canada. The US Army pursued them for over 1170 miles fighting retreat which would become known as the Nez Perce War. Though such resistance won him great fame and admiration, Chief Joseph would later surrender after a devastating 5 day battle in freezing conditions with no food or blankets as well as leaving the major Nez Perce leaders dead. By this time, 150 of his followers were either dead or wounded.

Between the Subarctic and Northwest Coast regions, you’ll find a small interior cultural area known as the Northwest Plateau. This region is situated in the interior of British Columbia as well as the non-coastal ranges of Washington state and Oregon with some of Idaho, Montana, and California. Topographically, you’ll find it between the Cascades and the Rockies. Nevertheless, this is an area with a very cold but semiarid climate which makes it nowhere near suitable for agriculture. However, it’s also home to 5 major volcanoes as well as 27 known to be active, which may good for soil content but not a place you’d want to live. Still, you don’t really hear much about this region except maybe when it comes to Chief Joseph and the Nez Perce. But it’s not a happy tale to tell. Yet, famed Native American author Sherman Alexie also hails from this region, too, and he’s perhaps the best known native literary figure to date. Not surprisingly these Northwest Plateau tribes tended to move around a lot following various food sources. But they also lived in a prime trading location and often exchanged goods with other tribes. Oh, and they also were prolific basket weavers, relying on many local fibrous plants to make them.

The Northwest Plateau may have its share of plants and waterways. But its generally rough terrain, high elevation, and semiarid but cold climate don’t make it ideal for a sedentary agricultural lifestyle. Is also home to a lot of volcanoes, including Mount Saint Helens.

First Peoples: Region has been continuously inhabited for 10,000 years and save for the grinding stone and the bow and arrow, way of life remained mostly unchanged until the 18th century.

Environment: Consists of rivers, lakes, mountainous evergreen forests, and grassy valleys in the Canadian area with heavy rainfall. The US area is semiarid. Though summers are hot, winters are long and cold. Elevation ranges from 5,000 feet to 14,000 feet and is home to 27 active volcanoes as well as Mount St. Helens.

Like their Pacific Northwest neighbors, salmon consisted of a major part of the Northwest Plateau peoples’ diet. In eh summer, Pacific salmon would swim up river, leading the men to trap the fish. Once caught the salmon would be smoked on a fire, stored underground, or boiled in hot water for oil.

Subsistence: Hunter, gatherer, and fisher subsistence. Fish were a main staple in their diets (particularly salmon) along with roots and berries. Also hunted deer, elk, caribou, antelope, mountain sheep, bear, rabbit, squirrels, marmot, beaver, raccoon, porcupine, and other small game. Another major staple were Camas lily bulbs which were dug up (though the white ones are known to be poisonous).

The primary winter dwelling for the Northwest Plateau people was the pit house. These would consist of hole being dug into the ground with an earthen roof over a wooden frame. Entrance way was through a wooden ladder.

Housing: Pit houses were primary winter residences that were mostly built below ground with an entry via ladder on the roof that could either be flat or domed shaped. Several families lived in these houses while the chief’s could be twice as large. And these pit houses during the winter could sometimes be connected with tunnels. For summer shelter, some would reside in teepees, especially if they lived near the Plains. But unlike their Plains neighbors, they mostly used bulrush reed mat floors. Another shelter was the Tule mat lodge that were essentially large, oblong shaped teepees and constructed with the same materials. Lean-tos would also be constructed from poles and tule brush mats and were very temporary. Sweat lodges were built from grass and earth covering a wooden frame. Those who lived around the Lower Columbia lived in plank longhouses that could be 20-60 feet long and 14-20 feet wide (with each village there consisting about 5-20). These were built over a pit that was 4-5 feet deep and roughly the same size as the dwelling.

While clothing among the Northwest Plateau Native Americans can consist of the standard buckskin, braids, and beads you’d associate with native culture, the women were also known to wear the distinguishing basket hats. Also, both sexes had braided pigtails (or at least the women).

Clothing: Generally made from bark, grass, animal skins, and fur. Men and women wore breechcloth aprons, ponchos, and moccasins. Men wore shirts while women donned dresses or skirts. Men donned fur leggings in winter while women’s were of hemp. Ornaments were made from shell and bone while beads were derived from soapstone. Clothes were also painted. Headdresses were used to represent a person’s status within the community with the most elaborate being made from feathers and beads. Women were also well known for wearing basket hats. Sometimes the leaders wore feather headdresses. Both sexes left their hair long, sometimes in two braids. 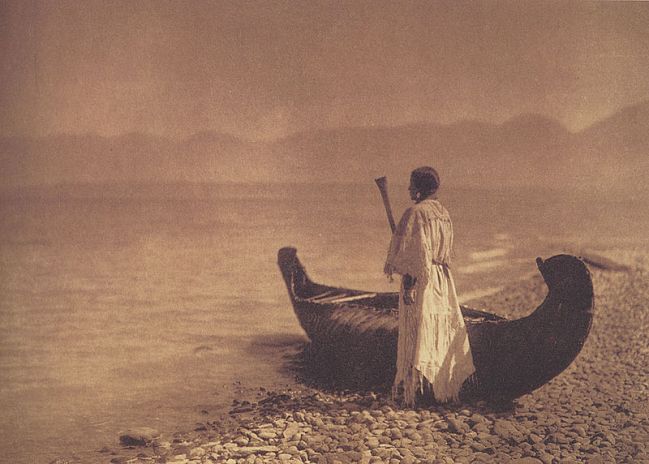 Pre-contact Northwest Plateau transportation was mainly by canoe if not on foot. These would be made from bark, dugout wood, or animal skins. Once horses were introduce, people in this region would use them, too.

Society: Largest estimated pre-contact population is said to be around 50,000. Primarily nomadic with most groups following regular migratory routes to obtain foods at their greatest productivity to both meet immediate need, build surplus for winter, and trade (the largest being at the Dalles and Celilo Falls, at the head of the Columbian Gorge). Villages were politically autonomous and village chief authority lay more in their ability to persuade and adjudicate than in their power to make rules and enforce decisions. Both men and women can be chiefs of many bands though family chiefdoms were usually inherited. Specialized leaders like salmon and war chiefs only exercised leadership on special occasions. Only the far western groups practiced hereditary slavery and a caste system like the Chinook with the upper castes practicing social isolation. However, there was always a reluctance to engage in warfare.

Plateau area Chinook tribes were known to head bind their own children’s heads to create a pointed appearance. However, contrary to popular belief, the Flatheads were called such by their neighbors because they didn’t practice this.

Family Structure: Most people married outside their own village and many of these marriage networks survived after a spouse’s death as widows and widowers often married their spouse’s sibling afterwards. Men hunted, fished, as well as had a greater voice in politics, diplomacy, and military affairs. Women, meanwhile cooked, gathered plants, and tended to young children. However, both men and women were considered socially and economically equal in every way. Some Chinook Indians in the area were known for subjecting their kids to cranial deformation. Lower Columbia tribes buried their dead in raised canoes with all their worldly possessions and never spoke of the deceased again by name for fear of summoning a ghost. Boys from 5-10 were subject to a whipping ceremony in order to prevent sickness during the winter months.

The Northwest Plateau is well known of their art in fine beadwork, carvings, quillwork, and basketry. Like Native Americans from other cultural areas, such art was part of their every day lives.