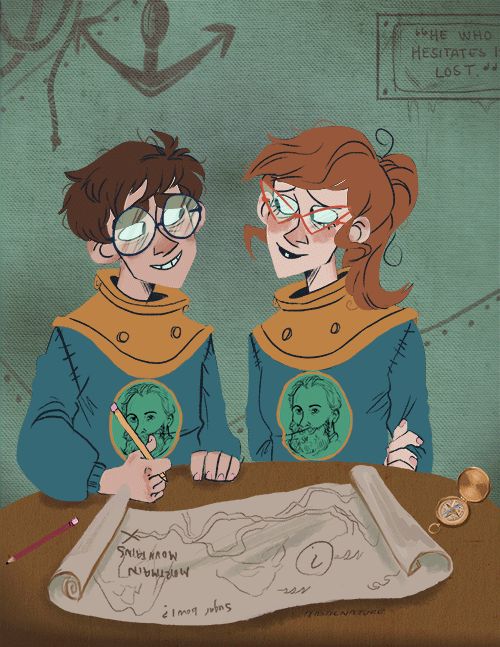 Meanwhile, Klaus and Fiona work on the tidal charts to find the Sugar Bowl’s location. They determine that the Maltese tea set item (in a reference to the Maltese Falcon, as if it’s highly sought after but probably not worth all the trouble), was probably carried out to sea. But tidal charts aren’t the only thing on their minds. After all, Captain Widdershins accuses the two of flirting when his stepdaughter tells Klaus of her passion for mushrooms, making her a mycologist. Though if ASOUE wasn’t a series aimed for children, Fiona’s shroom obsession would’ve played out very differently (like she was into getting high on them). Anyway, it’s not hard to see her immense liking to Klaus despite being him about 2-3 years younger than her. After all, she spent most of her time on the Queequeg, away from plenty of boys her own age (though she could’ve went to school for all I know). Other than her stepdad and the occasional volunteer crewman, Fiona doesn’t have a lot of opportunities. One day, this sweet and brilliant boy who’s been through hell and back shows up at the submarine. And keep in mind, she’s been following Klaus and his sisters’ stories for quite some time.

Since this is a musical, any hint of sexual tension is bound to be exploited to the nth degree here, I decided to have Fiona sing “Come a Little Bit Closer” by Jay & the Americans which was featured in the second Guardians of the Galaxy soundtrack. The original version tells a story of a young woman romantically involved with Jose but seduces the narrator with flattering words until he’s love-stricken. After they kiss and Jose chases the guy away, she uses the exact same words on him, suggesting she goes with the same script for every suitor.  In other words, she’s a player, y’all. In this version, I have Fiona entice Klaus since she’s the only guy she’s seen in a long time.

On the Queequeg, I can sometimes feel kind of lonely
You don’t meet many people living on my stepdad’s submarine
But you arrived into my way
I wasn’t sure of what to say
And I knew, yes, I knew who you were
But I have to say

From the look on your face, your boyish gaze so inviting
But I just cannot resist just one little kiss so exciting
While we work on our tidal charts
I can’t help that you are so smart
Though I know, yes I know I should stop
But you just steal my heart

If you want to know, I’m very passionate about mushrooms
I’ll show you my mycology stuff if you come up to my room
So come take me by the hand
While we don’t see my stepdad
C’mon, Klaus, don’t be so shy
Hear what I say