Reality TV has such a presence in our culture that you have to be under a rock no to have any exposure to it at some level. Unfortunately, I believe that a lot of it tends to appeal to the lowest common denominator. But perhaps it might explain why The Hunger Games is so popular since a lot of the stuff you see in the books and movies are what you see in reality shows. This is especially the case when Katniss has to fake a romance with Peeta during the course of the competition. But at least Katniss had a good excuse since the Hunger Games is a teenage death match. Yet, she did toy with Peeta’s emotions in the process which devastated him at the end of the first book. In world of reality shows, you have production crews meddling in people’s lives all the time. They have writers who craft story lines and scenarios for the participants to follow. Sure it’s not scripted but that doesn’t mean participants are being coached. You also have a lot of deceptive editing, too. So we can’t say that what’s presented in reality TV is necessarily real. Nevertheless, for your reading displeasure I bring you another installment of terrible reality shows with the same appeal as a train derailment. 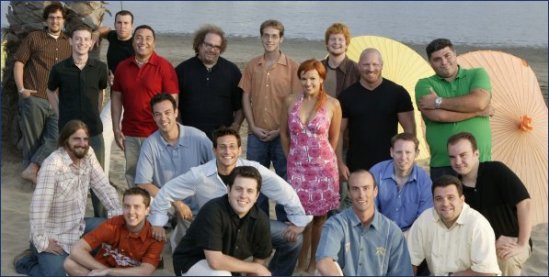 On Average Joe a bunch of normal guys compete for the hand of a unrealistically beautiful woman. Sure these guys don’t look half-bad. But c’mon, why didn’t they have one with average looking women competing for a beefcake?

Premise: A bunch of normal looking guys compete to win the affection of a gorgeous woman. Halfway through there are some hot guys thrown in as well, just in case she starts falling for some of them based on their personalities.

Why It’s Stupid: Let me put it this way, would anyone be willing to do a reality show pertaining to a group of normal looking women vying for an incredibly gorgeous guy?

Did it Get Canceled?: Yes, but it went on for a few seasons. 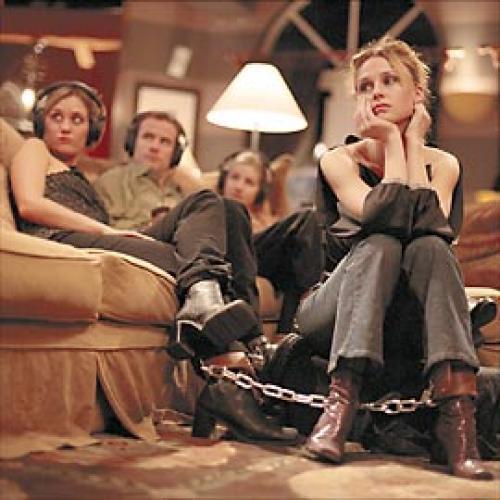 In Chains of Love, contestants are chained together in order to compete for the love of the person in the middle. They also live in a mansion where they eat and sleep together. Hope they don’t bathe, dress, and go to the bathroom together. For God’s sake, you have to wonder about these things.

Premise: Dating show where contestants are chained to 4 suitors of the opposite sex, sometimes for days where they eat together and sleep together. Each suitor represents a quality they look for in a potential mate. After a couple of days, one “chain gang” member is cut by the person in the middle and is given some of a $10,000 purse. At the end they’ll have to choose a winner who will get them and the rest of the $10,000 purse.

Why It’s Stupid: Uh, being literally chained to suitors isn’t really a lot of fun. Also, you have to wonder how these people even bathe, dress themselves, or go to the bathroom. Or whether the person in the middle has sex with any suitors or if the others watch it. It’s a miracle that no one on this show was murdered at all. One person called it, “a S&M Party gone horribly wrong.”

Did it Get Canceled?: Yes, and so did the network.

In Change of Heart, couples go see other people before deciding to whether to stay together. If you and your partner are on this show, you might want to evaluate your relationship. Seriously, this is messed up.

Premise: 2 couples go on dates with other people and decide whether they want to stay together.

Why It’s Stupid: Seriously, this show takes the “seeing other people” thing a bit too far. When someone said that they want to see other people, it should mean they want to break up with them. Not going on dates with other people and wanting to stay together.

Did it Get Canceled?: Yes, but ran for 5 seasons.

Conveyor Belt of Love was a show on ABC where women look at guys on a conveyor belt before deciding to date them. Here one guy takes off his shirt to reveal his washboard abs.

Premise: 5 women check out 30 men who pass them by on a giant conveyor belt who only have 60 seconds to impress them. If a woman is interested in someone, that man will step aside and wait as the rest of the men go by. But if another man comes by on the belt who seems better than that woman’s first choice, then she can swap out the man waiting off of the belt as many times she wants until the last man has passed by. If 2 or more of the women are interested in the same man, the man on the conveyor belt gets to choose which one he’d have to wait for. After all 30 men made it through the belt, each woman is left with her final choice as she embarks on a date in the hope of finding a true connection.

Why It’s Stupid: Oh, there’s nothing romantic like checking out guys like they’re cars just off the assembly line (sarcasm).

Did it Get Canceled?: Yes, after one season.

In Date My Mom, a single dater goes out with 3 moms who try to convince them to date their kids. Yes, I know it’s kind of like the Graduate and it’s creepy but that’s beside the point. No, I don’t know if there was any Mrs. Robinson contestant.

Premise: Single dater goes out with 3 moms who try to convince them to date their kids. The dater chooses which of these they want to date.

Why It’s Stupid: Have anyone of you have ever seen The Graduate? When it comes to dating, you might want to skip on dating somebody’s kid after going on a date with their parents. Let’s just say Thanksgiving going to be awkward. It would’ve been more ironic had they used “Mrs. Robinson” as a theme song. Creepy. 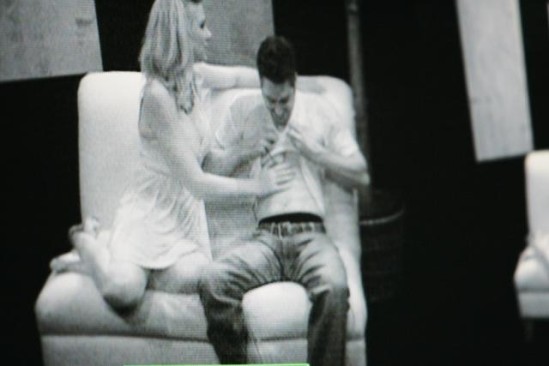 Hey, I don’t mind meeting a guy on a blind date. But I’d rather be able to see him when I meet him. But this isn’t what these daters get in Dating in the Dark. Yes, it’s stupid.

Premise: 3 single women and 3 single men move into a house getting to know each other and form bonds in total darkness.

Why It’s Stupid: Going on a blind date is one thing. But dating a stranger in total darkness? Sorry, but I think it might be better to date somebody in a way I could actually see what they look like such as on the Internet (in some ways). Let’s just say, while looks aren’t everything, it could be a very disappointing experience to know that the person you dated in the dark didn’t look like you’d imagine them. And yes, the contestants are judged by their looks at the end. 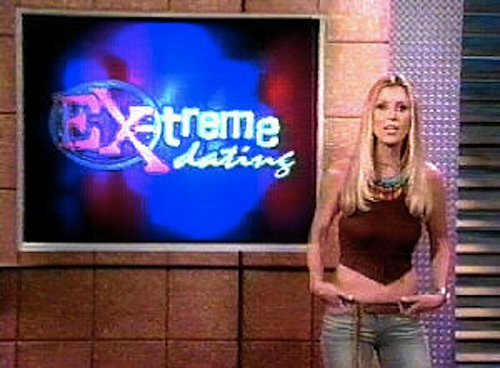 If you’re a girl who’d like to meet a new guy but doesn’t mind your ex stalking you and give you advice, then EX-treme Dating is the show for you. Or as I call it EX-treme Stalking. Because that’s what it is.

Premise: Two people go on a blind date chaperoned by their exes who talk to the daters through earpieces, guiding the conversation topic. At the end of the date, a limo shows up. If the dater is in there, the two go on a second date. If the ex is in there, they win a prize.

Why It’s Stupid: Hmmm….people going out on a date while being watched by their exes. In many situations, it’s called EX-treme stalking.

In ElimiDate, one contestant is paired with 4 of the opposite sex for a date. And as it goes on, things get sexier and sexier. Guess one has been elimidated so far.

Premise: One contestant dates 4 other contestants at the same time and eliminates them one by one. Think of it as a poor man’s version of The Bachelor.

Why It’s Stupid: Other than going on date with a few other people, the dates tend to get sexier and sexier. For instance, it would start in the park. But when it comes down to the final two, they’d be in a hot tub. Let’s just say, if I was one of the suitors to make it to the hot tub scene, I’d be glad to get eliminadated by that point.

Did it Get Canceled?: Yes, but it ran for 5 years.

Sure love should always trump money in the real world. But on For Love Or Money, if a suitor be chosen, they should’ve always chose money. Because a lot of reality show relationships don’t last.

Premise: It’s like The Bachelor with one contestant with 15 suitors to choose from. However, the chosen suitor always has the opportunity to start a relationship with the central contestant or taking home a cash prize while not being permitted any further contact. Eliminated contestants are forced to rip up their checks that represented the money they could’ve won.

Why It’s Stupid: Yes, I do think that love should trump money in the real world. However, in the world of Reality TV where plenty of relationships die after the credits roll, always go with the money.

Did it Get Canceled?: Yes, but not after 4 seasons.

40. Frank the Entertainer in a Basement Affair

In Frank the Entertainer: A Basement Affair, a bunch of beautiful women compete for a man who lives in his parents’ basement. And they have to move in for a time, too. Yes, it’s a true basement affair.

Premise: Another poor man version of The Bachelor. Here, 15 women contestants move in with Frank “The Entertainer” Maresca and his parents. And yes, it’s a true basement affair.

Why It’s Stupid: Yes, there are plenty of 30 something men who live in their parents’ basement and still rely on them. However, we usually never want to talk about it. Nor do we really want to watch an entire show about it. Also, if I were a contestant, I’d probably glad to be eliminated on this show.