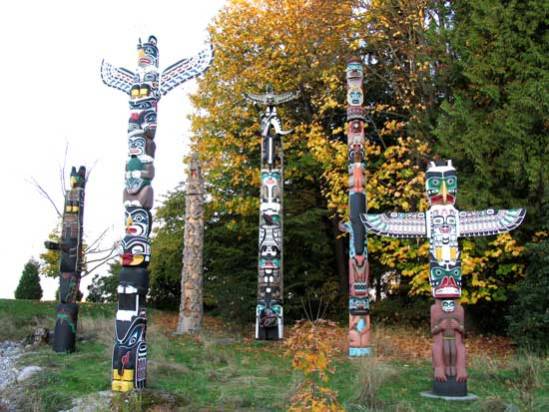 The Native Americans of the Pacific Northwest Coast could just as well be called the “totem pole people” due to their best known art form. However, these monumental structures were said to symbolize or commemorate cultural beliefs recounting familiar legends, clan lineages, or notable events. They may have also served as welcome signs for village visitors, mortuary vessels for deceased ancestors, or as a means to ridicule someone. The complexity and symbolic meanings of totem poles, their placement and importance lies in the observer’s knowledge and connection to these figures’ meanings.

Though the Pacific Northwest Coast is only a narrow stretch from southern Alaska all the way to the northern reaches of California, it’s a region with and abundance of natural resources that these hunter-gatherer tribes usually stayed in one place. It’s no wonder that it was the most densely populated cultural area in Canada before European contact. Nevertheless, the Pacific Northwest Coast is best known for their totem poles and their distinctive art that you might instantly recognize. Their art is also seen on almost everything, including their large cedar plank houses. Because since these people lived in a temperate coastal rainforest, they didn’t need to spend a lot of time like other native peoples did, searching for food so they won’t starve to death. And since they lived in one place all the time, they had plenty of leisure time to kill. These Native Americans also had rather sophisticated societies based on clans and class systems as well as a special centrality on salmon. But it’s not the only food they eat, yet it received a special ceremony when it’s in season that continues today. Then there’s the tradition of potlatch which was a highly complex event of social, ceremonial, and economic importance. There a chief would bestow highly elaborate gifts to visiting peoples in order to establish his power and prestige and by accepting these gifts, visitors conveyed their approval of the chief. There were also great displays of conspicuous consumption such as burning articles or throwing things into the sea, purely as displays of the chief’s great wealth. You’d even have dancers put on elaborate dances and ceremonies which was considered an honor to watch. Still, these events were held on special occasions like the confirmation of a new chief, coming of age, tattooing or piercing ceremonies, initiation of a secret society, marriages, a chief’s funeral, or battle victories. 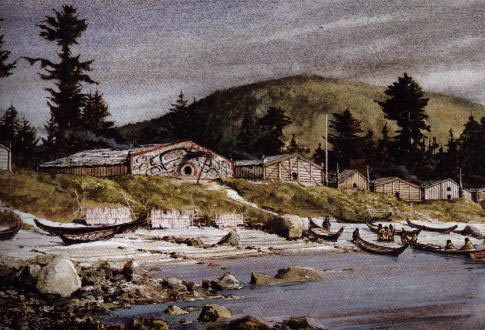 Because of the dense resource rich waters and rainforests along with a pleasant climate, the people of the Pacific Northwest Coast had an easier time than Native Americans in other regions. After all, most of them were hunter-gatherer tribes who usually stayed put.

First Peoples: First humans are said to enter the region at least 10,000 years ago via the Columbia River in the US Pacific Northwest. Evidence in southern Alaska and British Columbia suggests the early inhabitants existed at a basic subsistence level for 5,000 years until 3000 B.C.E. Earliest sedentary villages appeared in 700 B.C.E. with social ranking, woodworking, and regional art shortly thereafter. However, some areas in the US Pacific Coast along Washington state and Oregon continued in basic subsistence mode until possibly as late as 500.

Environment: Consists of dense temperate zone rainforests, rivers, islands, and oceans with abundant natural resources all year long. Climate is mild and rainfall is heavy that includes fierce winter storms and heavy fog. Trees are unusually tall and thick. Springs and glaciers usually flow into rivers that run to the coast. 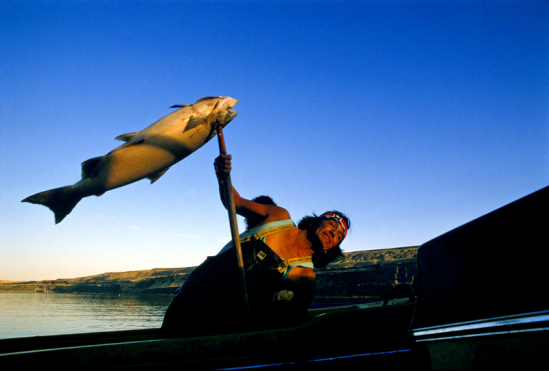 While Pacific Northwest Coast Native Americans had a varied diet, there was no food source more central to them than salmon. When salmon travel up rivers to spawn, they would literally catch thousands of them that could feed their families for a year.

Subsistence: Primarily hunter, gatherer, or fisher subsistence. Salmon was the most important food for the Indians in this region. However, they also consumed halibut, eulachon (candlefish), smelt, herring, and sturgeon as well as shellfish, seals, and whales. They also hunted elk, bear, deer, mountain goat, turtles, and some land mammals as well as gathered berries and roots. Food was generally eaten fresh, grilled, or boiled in a basket with hot rocks or steamed or baked over a pit oven.

Your standard Pacific Northwest Coast dwelling was the cedar plank house w which could be up to 50-150 feet long and 20-60 feet wide. Each plank house could be home to as many as 30 people.

Housing: Mostly lived in plank long houses of red cedar that was said to be 50-150 feet long and 20-60 feet wide. Each plank house was held together by wooden peg nails, had a large hole in a low roof for smoke ventilation, as well as consisted of a front door to keep heat in. Plank houses were furnished with simple furniture including bunk beds against the wall, storage areas, fire pits, and open shelves as well as dug holes for storing and cooling food. Your typical plank house would be home to several families, perhaps as many as 30 people. They were also commonly painted, often with a family crest. Individuals who built the longhouse usually resided there with their families and their kids would be assigned as space inside upon reaching maturity. But if the village built the plank house together, then it was the chief’s responsibility to assign living spaces to each family. And when the plank house owner died, it was either given away or burned to the ground. Because it was believed if the family stayed, then the dead person’s ghost would haunt the place. Also built temporary shelters made from mats, planks from the main house, or bark. 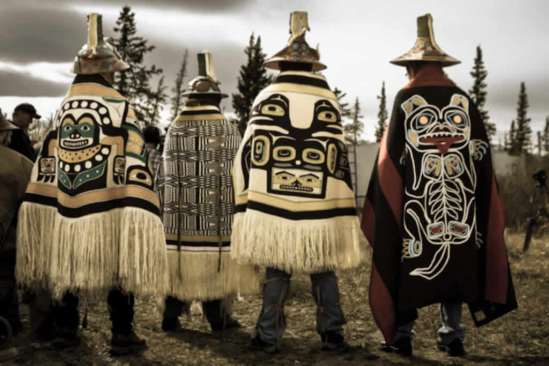 While people of the Pacific Northwest Coast usually wore very little under temperate conditions, they tend to be known for wearing their chillkat blankets and decorative woven hats. And yes, these can be highly decorated as well.

Clothing: Usually wore very little clothing except when it was cold or special occasions. In the warmer months, men would go naked while women only wore bark skirts. Clothing was mostly made from softened cedar wood or bark, animal leather, and wool. Bark capes and spruce hats were used as protection against the rain. High ranking class members would usually don chillkat blankets, dance aprons, leggings, and moccasins on special occasions. Adorned themselves with piercings and tattoos. 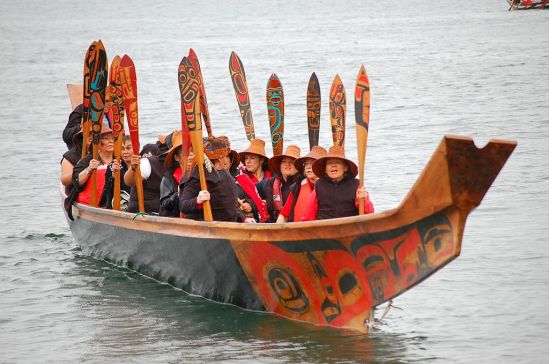 The Pacific Northwest Coast had several different types of canoes, mainly made from red cedar. They can be 50 feet long and 8 feet wide while holding up 2-50 people and up to 10,000 pounds of cargo. Of course, passengers have to bring their own oars.

Transportation: Built canoes of red cedar of several different types. They were usually 50 feet long and 8 feet wide as well as can hold up to 2-50 people and 10,000 pounds of cargo. Also had smaller boats for families and short outings. Also had dog pulled sleds for overland transport. 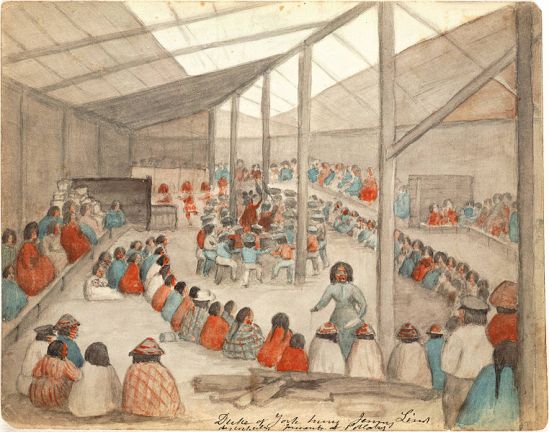 Potlatch was a major event for Native Americans residing in the Pacific Northwest Coast as a means to reflect wealth and perpetuate social inequality within a village. These were held during a major event as well as hosted by aristocrats. At each potlatch, the host would display their wealth through distributing goods to visitors and others whether they be chillkat blankets, animal skins, or even slaves.

Society: Year round access to food allowed people to live sedentary lives in permanent settlements. Estimates state that as many as 250,000 could have lived in this region at one time. Houses were always grouped together side by side and facing towards the water in small villages, each marked by totem poles. Some even had as many as 1,000 living in only 30 homes. However, some groups had one or more small permanent, semipermanent, or seasonal villages or camping sites as well. Nevertheless, people in this region lived in a society based on hereditary status and the ceremonial winter potlatch was both as a means to reflect and perpetuate this social inequality. These consisted of the nobility, upper class free, lower class free, and slaves (actually not members of society at all). Each individual would also be ranked within their respective groups as well. Since this system was based on inheritance, the classes were fairly immutable though some transfer was possible through acquiring (by trade, purchase, marriage, and war) some inherited rights. Such rights and privileges were owned by the identified group which included songs, dances, performances, and control of subsistence areas identified by crests or design patterns. These patterns could reflect real and mythical family lines and associated incidents, animals, or spirits. The village chief always was always the head of the wealthiest and most powerful family and was a nominal war commanders, often undertaking political and ritual preparations before fighting. Though intragroup conflict was minimal, clan incest and witchcraft were considered capital offenses. Intergroup conflict took place within the framework of feuds and wars. Feuds entailed conflict for legalistic purposes while wars were waged solely for material gain (as in land, booty, and slaves). Northern tribes saw more regular conflict than their southern counterparts. Night raids were preferred strategy and victims’ heads were often displayed on poles as proof of fighting prowess. Also practiced intergroup trade where prices were negotiated. 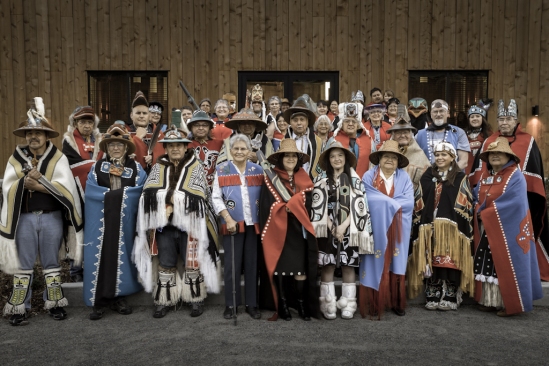 In a Pacific Northwest Coast extended family, one’s social rank and wealth intake were usually determined by their relationship to the family chief. Of course, since this was a matrilineal clan that practiced exogamous marriage, this only applied to the people on his mother’s side. Family chiefs were usually the wealthiest and oldest member of the clan.

Family Structure: Primarily matrilineal descent. In extended families, family chiefs were usually the oldest and highest ranking individuals while everyone else’s rank was determined by their relationship with the chief.  Family chiefs were primarily responsible for distributing wealth according to social status. Men practiced hunting, building, carving, and fishing while women did housework, raised kids, cooked, wove, made clothes, and dug for shellfish. Marriages were always conducted between people of different clans. When a man decided to marry a woman, he paid her dad an agreed amount before the wedding took place. This amount would be paid back when after the birth of the couple’s first child. After the payment, the wife was no longer obligated to be with her husband (so she could stay or leave him after that point). 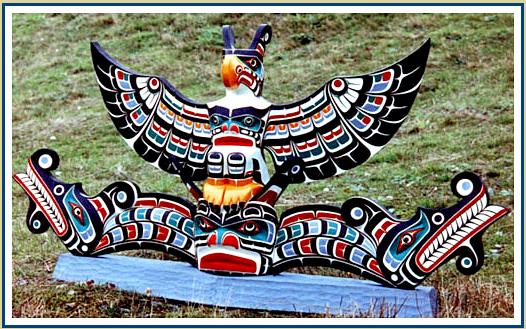 Aside from totem poles, the Pacific Northwest Coastal peoples are also well known for their elaborate ceremonies and their distinctive stylized art. Works of art could range from practical objects such as clothes, tools, transportation, houses, weapons, and what not to the purely ceremonial and aesthetic.