Now to have a game you need an object as well as rules to follow and a method of play. If a game is on a board, then you need a way to navigate like a spinner or a dice. If it’s a card, then you need a way for those cards to be played. Sometimes the rules are straightforward and make sense. And sometimes they’re stupid and complicated. Of course, this doesn’t stop people from creating games based on some concepts that probably shouldn’t be such as taxes, legal cases, or restaurant seating. Of course, such aspects might seem exciting to some, but in reality they tend to be boring. And in some board games, that’s exactly how it is. But I wouldn’t be surprised if they make a board game based on working at retail or maintaining infrastructure. Of course, there are plenty of boring games out there. So for your lazy reading pleasure, here is another installment of my series on family unfriendly board games.

Object: Players attempt to score points by melding personality cards onto the restaurant playing board. If cards are not in sets or sequences, then players need to give a reason why they’d be sitting together. After players empty their hands or when all tables are closed, points are scored.

Why they thought it was a good idea: I don’t know. Guess they thought making a seating chart with celebrities would be fun.

Why it’s not: Celebrities or not, making a seating chart for a gala isn’t really fun, board game form or not. The guy who created it must be amused by paint drying, grass growing, or golf.

Now this is a board game where players have to be the first to collect 10 pink elephant cards to win. However, despite the disclaimer of “Not intended for use with Alcoholic Beverages,” I’m sure it’s ignored. Still, I don’t recommend drinking games because they’re perfect ways to encourage binging.

Object: Reminiscent of a college drinking game. Players roll and move around the board taking a drink when the board square instructs. Each time a player passes start, they must take a “Pink Elephant” card containing a tongue twister. Player gains the card if they recite it successfully. First player to obtain 10 “Pink Elephant” cards wins. Also, there’s a disclaimer that says: “Not intended for use with Alcoholic Beverages.”

Why they thought it was a good idea: I don’t know. I’m sure somebody had the idea of a drinking board game in college. It was released in 1962.

Why it’s not: Hate to sound prudish, but even among mature audiences I wouldn’t recommend drinking games to anybody. Now I don’t have anything against drinking. It’s just that drinking games tend to lead to binging which makes people a danger to themselves and to others. Not to mention, people who binge drink are known to be targets of crimes as well. It’s best recommended that adults should drink no more than 3-4 drinks a day. Participants in drinking games usually consume more, perhaps much more. This could cause serious health problems, birth defects, alcoholism, and sudden death. And despite the disclaimer, I’m sure most people would play this game with alcohol, particularly on college campuses.

Available?: I sure hope not. 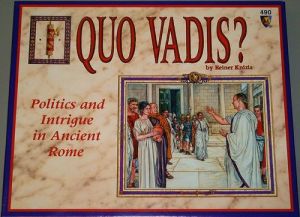 Move your politicians up to the Roman Senate through political manipulation, cutting deals, and backstabbing. Beware the Ides of March on this one as Julius Caesar failed to learn. Of course, I wouldn’t recommend this to families.

Object: Players are represented on the board with a group of politicians moving through a network of committees, and need to seek support from their competitors to advance up toward the Senate. Supporting an opponent gives players prestige which is necessary by the end of the game. Once all 5 Senate positions are filled, the game is over and only players who have a politician in the Senate are eligible to win. And of those players whoever has the most prestige wins.

Why they thought it was a good idea: Perhaps it was developed by someone who wanted to illustrate the political process of Ancient Rome.

Why it’s not: Let’s not kid ourselves, this is a game of political manipulation with players being forced to cut deals with each other. Also encourages backstabbing. May be great for political science and history majors but not so much for families or playdates.

74. Ring Around the Nosey

Of course, this is a game where players try to catch their colored rings through wearing elephant masks. Sure kids might like it (but I doubt it). But yeah, it looks pretty stupid.

Object: Players wear a plastic elephant trunk and ears mask to pick up all 3 of their color rings to win. And they do this with their plastic trunks.

Why it’s not: Let’s just say this was one of the bad games on Jimmy Fallon’s show. Even he thought it was a dumb game and swore the kids in the package were concealing their humiliation.

In this game, players recreate the Battle of Gettysburg but with wooly mammoths and yetis. Let’s just say it’s the kind of game that’s guaranteed to piss of Ken Burns, Gettysburg tour guides, and American Civil War buffs.

Object: Basically recreates the Battle of Gettysburg but with both sides using yeti mercenaries and bomb throwing wooly mammoths.

Why they thought it was a good idea: I don’t know. Probably created by someone who was bored in American History class. It was released in 2008 by the wat

Why it’s not: Hate to inflict a bit of personal bias here, but I’m sure it will be guaranteed lead to bumming the kids out when they find out that the Battle of Gettysburg wasn’t fought with yetis and mammoths. Let’s just say I don’t like my history tampered with. Best leave it to family members who already know what happened at Gettysburg first.

Available?: I’m not sure.

Groop Loop: though seen as an alternative to Twister, teaches children that they’re never too young to engage in some light bondage activities. Can also be called, “Grope Loop.” Man, you got to love the 1970s.

Object: It’s like a stand up version of Twister in which players have to perform various actions without falling while intertwined in a long, stretchy cord.

Why they thought it was a good idea: Was said to provide an alternative to Twister when released in 1978.

Why it’s not: When looking at the box, it makes Twister look more child appropriate and far less kinky in comparison. Let’s just say playing this game with your folks can get very awkward and uncomfortable. A reminder that 6 is never too old to develop a taste for light bondage. Can also be called, “Grope Loop.” 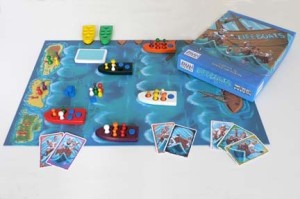 Created in Germany during the 1990s, this game has lifeboats trying to make their way to several islands over the horizon. Of course, this also involves throwing opponent sailors overboard to the sharks.

Object: Players represent a rag tag team of lifeboats trying to make their way to one of the several islands just over the horizon. However, only one boat will make progress in any given turn, so players try to convince everyone to vote for their particular favorite. To further complicate matters, sailors can’t seem to decide which boat they want to be in so they’re constantly jumping out of boats to swim in another one. Also, one of the boats springs a leak at each turn. If the boat is at maximum occupancy when the leak occurs, then players vote who to toss to the sharks.

Why they thought it was a good idea: Well, it was made in Germany during the 1990s. Other than that, I don’t have the slightest idea.

Why it’s not: Well, the game doesn’t play out what would actually happen in the event of an ocean catastrophe. Also, you have to wonder what kind of sadistic person would come up with such an idea for a game as this. One review complained there was nothing to do with this game other than to mess with the other players and dump them in the water.

Available?: Hopefully not, but I could be wrong.

78. I Vant to Bite Your Finger

Now this is a game where players turn a clock before the vampire wakes up. If he does, his cape swings open and the unlucky player would have to put their finger in his mouth. Yeah, kind of makes as much sense as “Put Your Hand in That Strange Dog’s Mouth” and “Shove Your Arm Down the Garbage Disposal.”

Object: Players advance with a die roll around the board and turn a clock attached to the vampire up to that number of clicks. But if the vampire wakes up, his cape swings open and the unlucky player would have to put their finger in his mouth and he will actually bite you (with a felt tip marker).

Why they thought it was a good idea: I don’t know. Guess the developer wanted to draw up business for Halloween in 1979.

Why it’s not: Uh, it’s basically a preteen version of “Russian Roulette” in a way that’s unbelievably disturbing beyond all comprehension. Also, makes as much sense as “Put Your Hand in That Strange Dog’s Mouth” and “Shove Your Arm Down the Garbage Disposal.” Not to mention, vampires aren’t known for biting fingers unless they work in drug testing. Then again, you don’t want a vampire game resulting in ruptured aortas, do you?

In this game, players are all stags whose aim is to mate with as many does as possible during the rut. Definitely would make an awkward family game night for non-hunter clans.

Object: Players represent a stag interested in food, fighting, and the opposite sex during the rut. Stags can grow antlers, eat food, maneuver for prime strategy territory for “rutting,” Player who mates with the most does and emerge as the dominant stag wins.

Why they thought it was a good idea: Your guess is as good as mine. Appeal to deer hunters? It was released in 2007.

Why it’s not: Let’s just say this is a strategy game in which the players’ characters aim to have sex with as many females as possible. Now this is similar to the rut which might be seen on nature shows, but still. This would make for a very awkward family game night.

Available?: Not sure. Maybe don’t want to know. 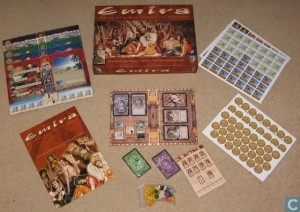 In this game, players are Arab sheiks trying to attract princesses for their harems and doing a bunch of other things. Sure it tries to make itself come off as PC but it doesn’t tell good history. Also, the game isn’t suited for families in any way.

Object: Players are Arab sheiks looking to expand their harems with more princesses by trying to make themselves as attractive to convince as many as possible to live in their harem. Each round, a princess with different preference comes into play and chooses the sheik she is most attracted to. There are also auctions where players bid to perform actions such as playing event cards, buying spice caravans, palace sections, camels, or improving appearance and status. Each player has a different goal card for the game.

Why they thought it was a good idea: Heavens, I have no idea. Perhaps a prostitution game wouldn’t come off as “educational.”

Why it’s not: For one, this wasn’t how harems worked at the time. Yes, they had princesses in them but most were already born there. The others were usually slave girls with sex and reproduction their main purpose (who were usually kidnapped and sold) or regular servants. Second, it’s pretty offensive to Arabs and women.