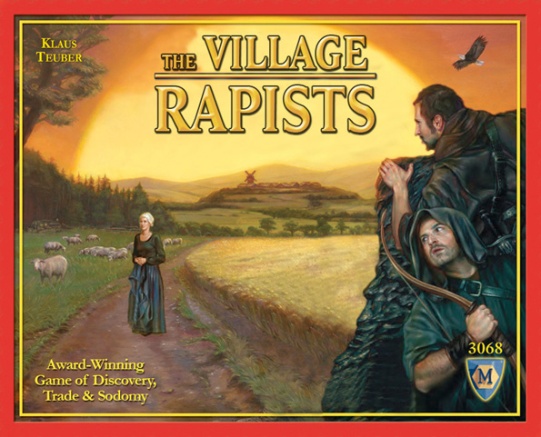 So we’ve come to the halfway point. Now there are a quite a few girl games in the mix with the key demographic being either preteen to teenage girls. Of course, many of them don’t tend to be very good since they usually tend to focus on stereotypically female things like boys, shopping, fashion, and very limited career options. In some ways, it’s inherently sexist, especially given the fact of how girls these ages are represented in the media as shallow, materialistic, and boy crazy. And it’s very obvious that many of these games weren’t created by women. Sure there may be plenty of girls like that but this isn’t always the case. But assuming girls are like this tends to lead to some unfortunate implications. But you keep seeing the same kind of stereotypes over and over again that College Humor made a parody game commercial that goes, “Boys, and fighting to the death, and kissing: The Hunger Games.” So for your lazy summer reading pleasure here is another installment in my series of family unfriendly board games. 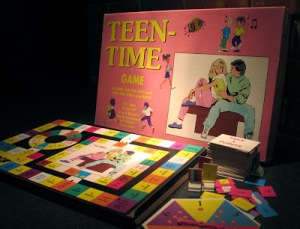 Teen Time is said to be a game that’s hilariously bad in later editions. In these, the game takes place at a mall with the object being to get engaged. Oh, and those who do wrong, get sent to the video store (which wouldn’t be much of a punishment for some teenagers). There’s also a card about being caught with a weapon.

Object: A self-described “game for pre-teen and teen age girls and boys,” about inter-personal relationships. Players start at the same point on the board and advance to spaces where they gain or lose points, receive other information, or instructions. Some may instruct the player to draw a bonus card that might give or take away points, grant or lose another turn, or even an “engaged” card. Some may have separate instructions for girls and boys. Goal is either to earn a pre-determined number of points first or get engaged to be married before the other players do.

Why they thought it was a good idea: The developers were probably trying to appeal to young pre-teen to teenage girls.

Why it’s not: For one, couples who marry in their teens or right out of high school run a high risk of divorce (then again, it was first released in the 1950s in which failure to get engaged by high school graduation led to girls having to go to college in some families). Second, it’s such an abysmally dumb game in which the designers really had no idea about adolescence. Also, there was a guy who blogged about it by saying it was so bad it was absolutely hilarious.

Available?: They had a version from the 1960s as well as one from the 1980s with a video store being an equivalent for jail in Monopoly. Man, I’d sure hate to be sent for a turn to the video store in the 1980s (sarcasm). Oh, and it takes place in a mall in which you lose 25 points if caught with a weapon. 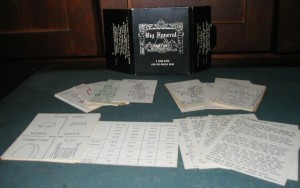 Sure it might look like a boring game from 1968. But its premise reads like a 1980s teen sex comedy, possibly directed by Tim Burton. Still, doesn’t seem to put the “fun” in funeral. But yeah, it’s an actual game.

Object: Throw wild funeral parties while still alive. Players strive to make their opponents look cheap such as sending them to Slob Hill in an orange crate coffin. Must accumulate $50,000 worth of hearses, tombstones, and other status symbols. 2nd highest card takes the trick in which players are trying to collect 4 objects to fill their cards consisting of a coffin, hearse, tombstone, and plot. Those without all 4 items will become a zombie and score no points in that round.

Why they thought it was a good idea: Despite sounding like 1980s teen sex comedy, it came out in 1968. Why anyone thought this would be a good idea, I’m not sure.

Why it’s not: I’m sure funeral planning isn’t nearly as crazy as this. Also, it’s just plain weird with the zombie part as well as sending dead opponents to Slob Hill in orange crate coffins. 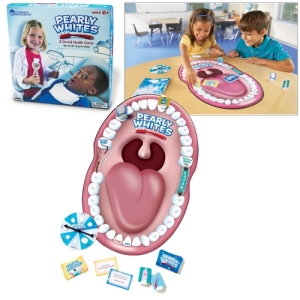 Now this game was made to teach children about teeth and dental hygiene. Round one, pertains to naming teeth. Round two, consists of dental hygiene. By round three, well, everyone is either bored out of their minds or fast asleep.

Object: Players move across the path of teeth in the mouth on the board. Players spin, move, and answer true/false trivia questions about good oral hygiene in order to win.

Why they thought it was a good idea: It was intended to be an educational game for children about dental hygiene.

Why it’s not: For one, the board is an open mouth. Second, while it is a kid’s game, the questions usually consist of naming the teeth and dental hygiene. It’s said to be pretty boring. Oh, and the box design is kind of disturbing.

Available?: Surprising no as far as I can tell. 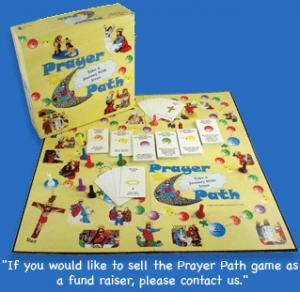 Now Prayer Path is a Catholic game supposed teach about the rosary and other stuff related to Mary and Jesus. Let’s just say children can learn all this quicker while in a weekend religion class for 2-3 hours than this board game.

Object: This is a game based on the rosary. Players move along the “bead” pathway and answer questions. Correct answer moves the player forward but only after they say the appropriate prayer. First contestant to complete the rosary is the winner.

Why it’s not: Let’s just say, it might be better to actually teach the rosary and read the Bible stories instead of making a trivia rosary game out of it. Let’s just say praying the rosary is much quicker when there’s no trivia game involved whatsoever (like 20 minutes). As for Catholic families, you might want to stick with Is the Pope Catholic? A Catholic Nostalgia Game instead. 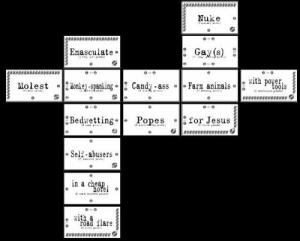 Now this is a card game where players use cards to come up with the most offensive stuff possible. Recommended for adult parties but I beg to differ. I mean you can always go too far with these things.

Object: A card game in which players get points by creating and completing more profane, obscene, blasphemous, or scatological phrases than the others. Each card contains a word and edge markers to denote how it can be placed in relation to other cards.

Why they thought it was a good idea: Well, people tend to swear and say a lot of offensive stuff at parties, especially under the influence of alcohol.

Available?: Yes, and they even have expansion packs for it. 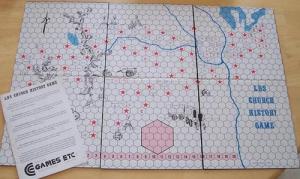 Now this game pertains to the Mormon journey westward into Utah where most of them live today. However, it wasn’t just marketed in Utah. Still, when it comes to games on westward journeys, I’ll just stick with Oregon Trail.

Why they thought it was a good idea: Possibly an idea by either a Mormon wanting to make his or her faith history fun or by a company that wanted to target people from Utah.

Why it’s not: For one, the board is ugly and looks boring. I’m not sure what Mormons would think about it. But as a Catholic history major, I’ll just stick with the Oregon Trail if I want to play a game about the American West.

Available?: Not sure if I want to know. 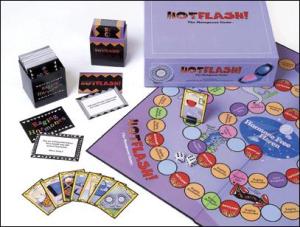 Finally, there’s a game for middle age women to learn the magic of menopause in the most offensive and stereotypical way possible. Actually, it’s probably better if women actually read up on menopause than play a board game on it.

Object: Players have to make their way around the board to Hormone Free Haven as well as avoid PMS Purgatory and going down the Fallopian Tubes as well as Weepy Way, Lustless Lane, Bitchy Boulevard, Insomnia Aisle, and Forgetful Forest. Also, Landing on a “Hotflash” circle forces a player to perform a ridiculous challenge or reveal a deep personal secret. The “Raging Hormones” circles offer facts about menopause.

Why they thought it was a good idea: I don’t know. A desperate need to appeal to women and their bodies.

Why it’s not: As a writer from Cracked put it, “Hotflash! is what happens when Snakes and Ladders gets vomited on by a health textbook,” and “I haven’t seen this many stereotypes about women in one place since I visited a men’s rights website.” Yeah, I think it’s bound to ruin friendships and might give women a bad name. This game was also most likely designed by men.

48. TPOC: The Politics of Cannibals 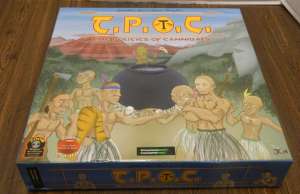 Now this games gives players to look in the political struggles of cannibalistic tribes after their leader dies. Those who aspire to be top cannibal can either be chief or stew.

Object: Players represent ambitious young cannibals wanting to replace the recently deceased leader of the tribe. Players need to find out the tribe’s most important issues as well as convince the majority that they have the best interests in mind and serve their rivals at their next meal. Once tribal counsel members are identified, they will hold a vote for the next chieftain. Winner is elected chieftain while challengers get thrown in the pot.

Why they thought it was a good idea: I have no idea but it was released in 2009.

Why it’s not: Cannibal tribes really don’t make great motifs for family games and may perpetuate bad stereotypes. And I’m not sure if cannibalism politics is a great game topic either. 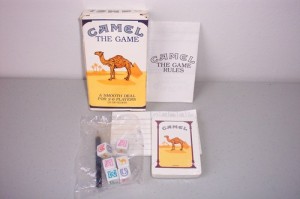 Though it’s not uncommon for some games to be promotional products, this is perhaps one of the most disturbing examples. Seriously, it was issued by R. J. Reynolds a tobacco company which had 200,000 of these. You can guess their intentions from there.

Object: Players roll the dice with the letters C, A, M, E, L and try to match them with the cards.

Why they thought it was a good idea: It was a promotional product by the R.J. Reynolds Company in which 200,000 were printed.

Why it’s not: It’s a promotional product by a tobacco company.  Kind of self-explanatory what the agenda is. Also, the game is kind of a stupid product placement stunt. 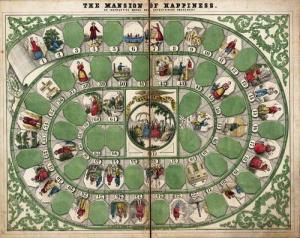 Now the Mansion of Happiness was one of the first mass produced board games in the United States. However, its play usually consists of a highly moralistic Chutes and Ladders. And let’s just say some bad vices lead to torture and jail time in this one.

Object: It plays like Chutes and Ladders but based on the Puritan worldview as well as have players move in a circle. Players strive to be the first to travel around the spiral track to reach the Mansion of Happiness (Heaven) at the center of the board. Virtuous deeds send a player forward while vices send them to the pillory, House of Correction, ducking water, or whipping post.

Why they thought it was a good idea: This was created by a clergyman’s daughter in 1843 which criticized American industrial and urbanization. It was the first commercially produced board game in the US.

Why it’s not: Let’s just say it’s based on the Puritan worldview. Also, let’s just say some parts of it make Chutes and Ladders seem tame by comparison. For instance, while virtues may lead to steps forward, vices lead to steps backward and possibly torture or jail.